Bidding begins at 9 a.m. April 11 as Barrett-Jackson stages its 17th annual collector car auction at the South Florida Fairgrounds in West Palm Beach, where more than 600 vehicles and 300 lots of automobilia are on the docket.

Most everything will be offered at no reserve, which means high bidder hears the auctioneer hammering “Sold!”

As you’d presume, there’s a hefty dose of muscle being offered, including 16 vehicles from the William “Chip” Watkins Collection.

So let’s take a tour of 10tempting picks, each of them being offered at no reserve:

Outrageously styled and incredibly large, this Dearborn barge sports an original interior and 27,000 original miles. It has been repainted once, but the interior, sheet metal, glass, trunk and floor pans are original and unmolested. Being a Lincoln, it has a mammoth 430cid V8 engine and automatic transmission. And it has all the goodies you’d expect: its original signal-seeking AM radio with power antenna, power windows, “Breezeway” rear window, and a remote trunk release. This is mid-century modern luxury living at its wackiest.

Look closely; this isn’t your typical Eldo. It’s one of 99 built that year by Pininfarina. Costing more than a Rolls-Royce, the pillarless hardtop was designed at Cadillac by Chuck Jordan and David Holls, and reworked in Italy with classic Italian design restraint. The Brougham came with all power luxuries, including factory air conditioning and the world’s first power memory seats. It’s powered by a 345-horsepower 390cid V8 and Hydramatic transmission. It’s a unique Italian twist on a classic Cadillac, one with an impeccable coachbuilder pedigree.

This lovely Shelby has been owned by the same family since new, so it’s no surprise that all the numbers match. Better yet, it wears its original sheet metal and inboard headlights, has less than 35,400 original miles and comes with the original Shelby owner card, Shelby work order, Monroney sticker and door/data tag, although it’s equipped with the optional three-speed automatic transmission. Still, this was the last year for the model, and its automatic transmission makes it a good choice for those who can’t — or choose not to — shift for themselves.

Well this sounds like fun: a resto-mod Corvette that maintains its original look but is heavily modified underneath, with a narrowed chassis, Penske coilovers, splined sway bars and independent rear suspension. Power comes from a GM Performance LT1 direct-injected V8 with 460 horsepower channeled through a 5-speed manual transmission and a 9-inch Ford positraction rear. Behind its 345/30 ZRI 9 Michelin Pilot Sport red line tires are 6-piston 13-inch brakes. Inside, its leather-lined interior and features a wood steering wheel, and Bluetooth.

Originally designed for Cadillac, the Riviera was GM’s answer to the Ford Thunderbird. The Riviera’s original design sported hidden headlamps, but engineers nixed the idea due to budget and time constraints. Thankfully, the design was put into production for one year, 1965, the same year that Buick introduced the performance-oriented Gran Sport option across its lineup. Given its status as one of the finest designs of the 1960s, this year’s revised looks and GS option make it the best Riviera to own.

Once fairly ubiquitous, you rarely see these Beetle-based two-door station wagons anymore. This is a two-owner car, with its original window sticker and sales contract. Its rear-mounted, fuel-injected 1.6-liter 4-cylinder air-cooled engine was rebuilt in 2009, at which point it was repainted as well. It also has new tire and front disc brakes, along with the receipts for all the repairs. It’s equipped with a 4-speed manual transmission and an Alpine stereo, not to mention the cred that comes with driving such a funky vehicle.

Built by Robert Gee to compete in NASCAR’s Late Model Sportsman Division, this Nova won at Richmond, Darlington, Rockingham among others. Once the Busch Series replaced the Late Model Sportsman, Earnhardt won the first Busch Series race at Daytona in 1986 in this car. Moving this machine is a 358cid NASCAR V8 engine generating more than 700 horsepower through a f4-speed manual transmission. It’s one truly badass Nova.

One of 90 modified in 1980 by the company Special Vehicle Development to commemorate the 24-Hours of Daytona, the Hugger’s looks make up for what it lacks in speed with Hugger Orange paint and special wheels and tires. It boasts improved gearing, special handling packages, Koni shocks, front spoilers, special steering wheel and appearance enhancements. Its Chevrolet small block mates to a B&M lock-out shifter, Koni shocks, not to mention the car’s bronze anodized M0m0 steering wheel. Not a car for those in the witness protection program.

Formerly owned rock musicians Van Halen’s Michael Anthony and Alice Cooper, both of whom signed the car, this unique mod was built by West Coast Customs, which shortened the vehicle while shortening and raking the A-pillars, lowering the suspension and eliminating the rear doors. Extra bracing was added to maintain stiffness. Its wild two-tone suede interior boasts 10 Orion speakers, four amplifiers, two televisions, a touchscreen and three camera monitors. While its 5.7-liter Hemi V8 has been fitted with a Borla exhaust, and Brembo 8-piston brakes. 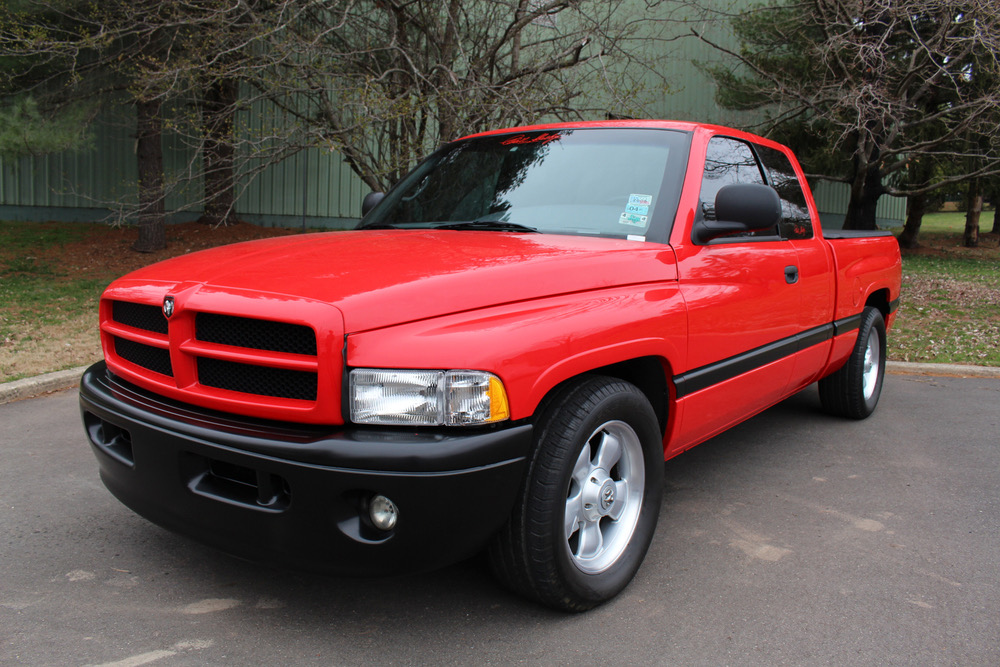 Why buy any used old Ram when you could buy one formerly owned by Carroll Shelby? Fittingly, it hauls as well as hauls, thanks to the Viper’s 8.0-liter 10-cylinder engine and 5-speed automatic transmission. It also boasts a custom electric engine cooling fan, custom twin Viper T-body intake manifolds, and has a custom 2.5-inch exhaust with high-flow catalytic converters. Best of all? The title is still in Carroll Shelby’s name. This is a truly a truck to treasure – and useful for tearing up the tarmac.