In the very crowded compact crossover-SUV market, automakers are constantly working to outdo the competition. It must be very stressful for them, but we’re all reaping the benefits in the form of some great cars.

One of those vehicles, the Mazda CX-5, has been a standout underdog for years. Its 2019 version, which now has an optional turbocharged engine, is yet another solid entry for the Japanese company that continues to punch above its weight. 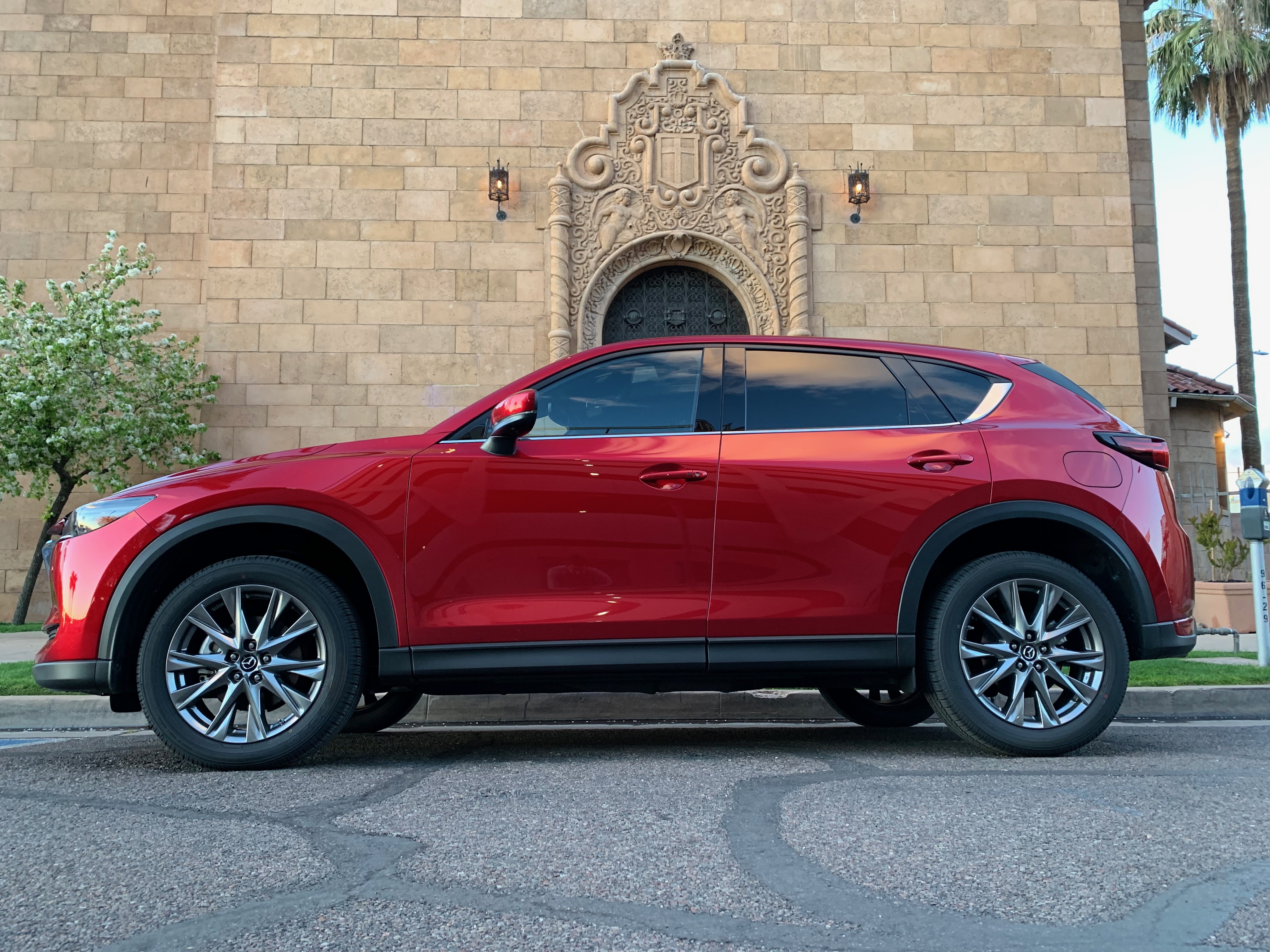 Before we go any further, full disclosure: My wife and I own a 2018 Mazda CX-5. It’s her daily driver and has a long list of standard features not seen in competing cars, including those with higher price tags. I enjoy driving it, but the naturally aspirated 2.5-liter 4-cylinder engine lacks punch.

Mazda sought to alleviate that concern with the 2019 models. The higher-level trims now come standard with a turbocharged 2.5-liter engine that adds 40 horsepower and an whopping additional 124 pound-feet of torque over the previous model year. The result, especially when paired with all-wheel drive, is a compact SUV that has the engine performance to back its sporty looks. 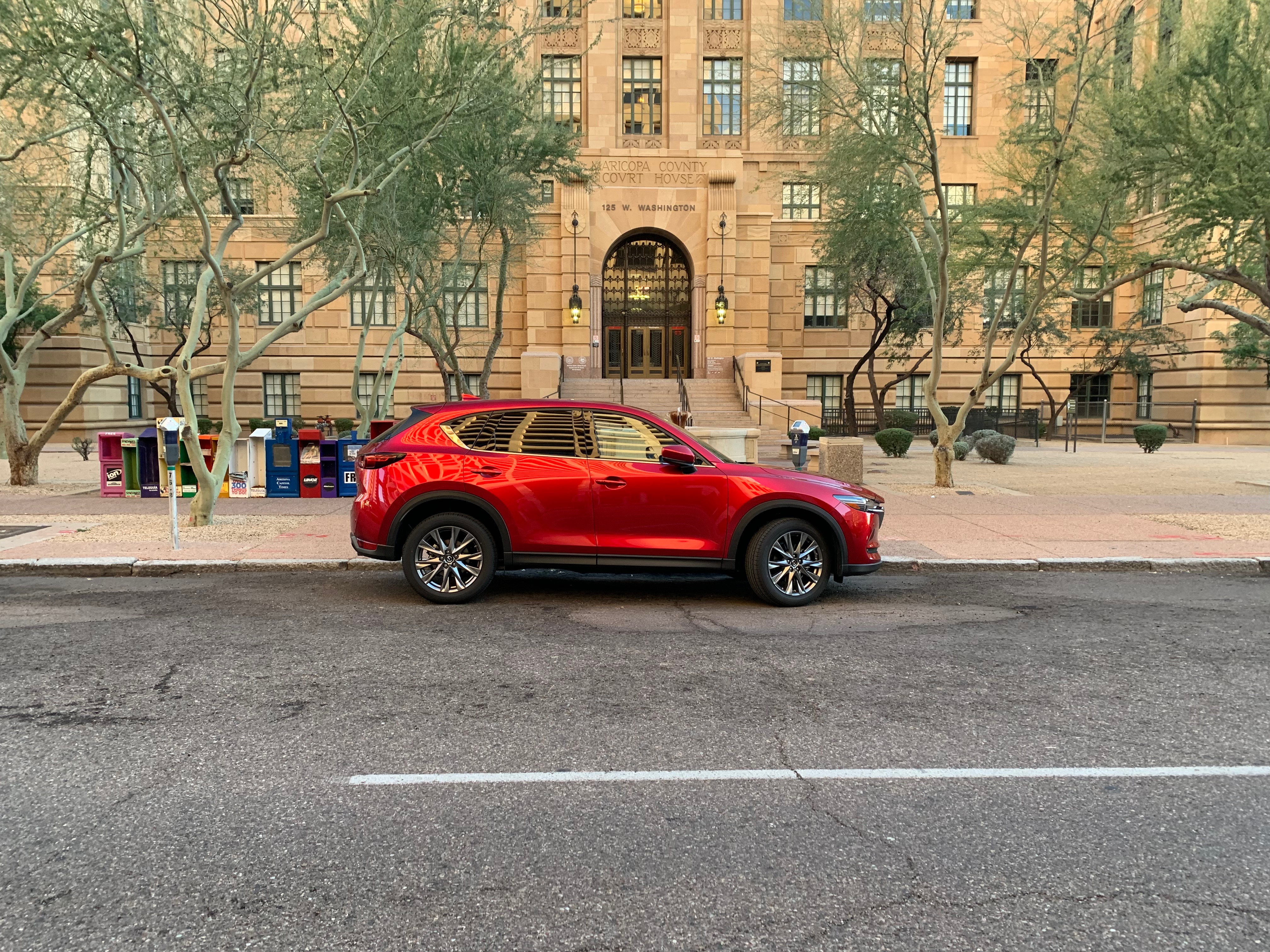 The 2019 model is the third model year of the second-generation CX-5. Like its predecessors, it features a large, mostly chrome-trimmed black mesh grille that dominates the vehicle’s front end. On either side of the grille are slim headlights — the top-of-the-line Signature trim I drove had all-LED lighting. Interestingly, the top of the hood overhangs the grill slightly and lines up with a small chin spoiler, which gives the snub-nosed SUV an aggressive slant.

Contoured sides continue the sporty look to the rear, which features higher-mounted taillights that echo the slim design of the headlights. The 19-inch alloy wheels are slightly dwarfed by the large wheel wells, but the overall design of the CX-5 gives it an air of sporty sophistication, especially in Mazda’s great Soul Red Crystal Metallic paint. 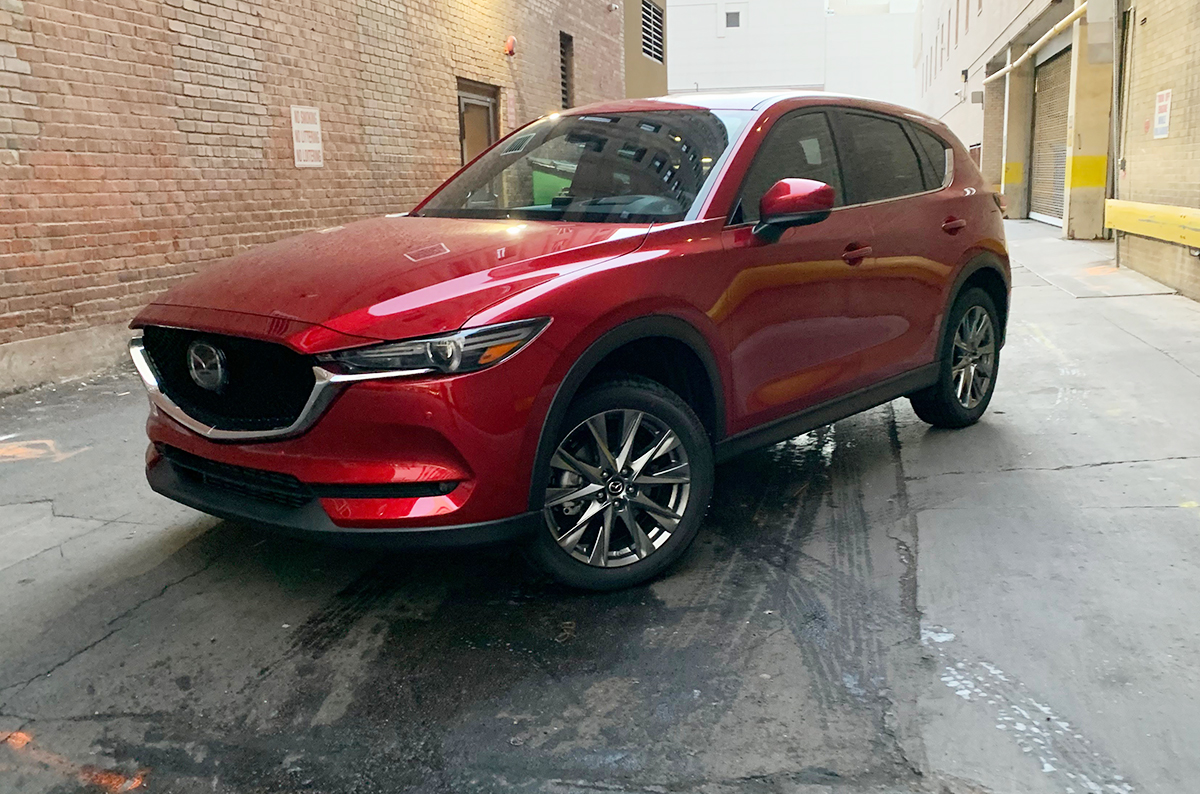 The elegant interior is where the CX-5 really shines. While the driver is presented with everything needed to control the vehicle and all its settings, passengers are treated to clean lines and plenty of room in which to get comfortable. The Signature version comes with Nappa leather-trimmed upholstery; the one I drove had the Caturra Brown color, which blended nicely with the mostly black interior.

The interior seats are well-bolstered and the stitching gives the sense of a luxury vehicle. Mazda did an excellent job of keeping the interior simple and sophisticated, which adds to the feel that the car should be priced higher.

However, the interior is home to my top complaint about the CX-5: the infotainment system. Operated by several knobs between the shifter and center console, the small screen and subpar backup camera fall short of expectations.

The knobs, apparently part of Mazda’s push to eliminate touchscreens for safety reasons, actually work well and quickly become intuitive. But the screen and its clunky menus feel old and outdated. Instead of complimenting the otherwise nice interior and technology, the infotainment system sits like a sore thumb atop the dash. Mazda would be wise to revamp the system.

The lack of updates in the infotainment do not extend to any of the vehicle’s other tech. Standard safety features include blind-spot monitoring complete with alerts for rear cross traffic and its Smart City Brake Support — basically, front collision avoidance.

The turbocharged engine gives the CX-5 a needed upgrade in performance. The engine, which is the same one used in the much larger CX-9, is responsive and turbo lag is minimal. Acceleration comes quick, especially on the freeway.

Thanks to Mazda’s suspension and G-Vectoring Control, which is basically an advanced form of chassis management done through the drivetrain, the CX-5 feels nimble and handles like a smaller vehicle. The system is standard on all Mazdas — focusing on cars and SUVs with sporty handling is a brand signature. Without going into the complexities of the system, it allows for more precise steering and makes the SUV downright enjoyable to drive. 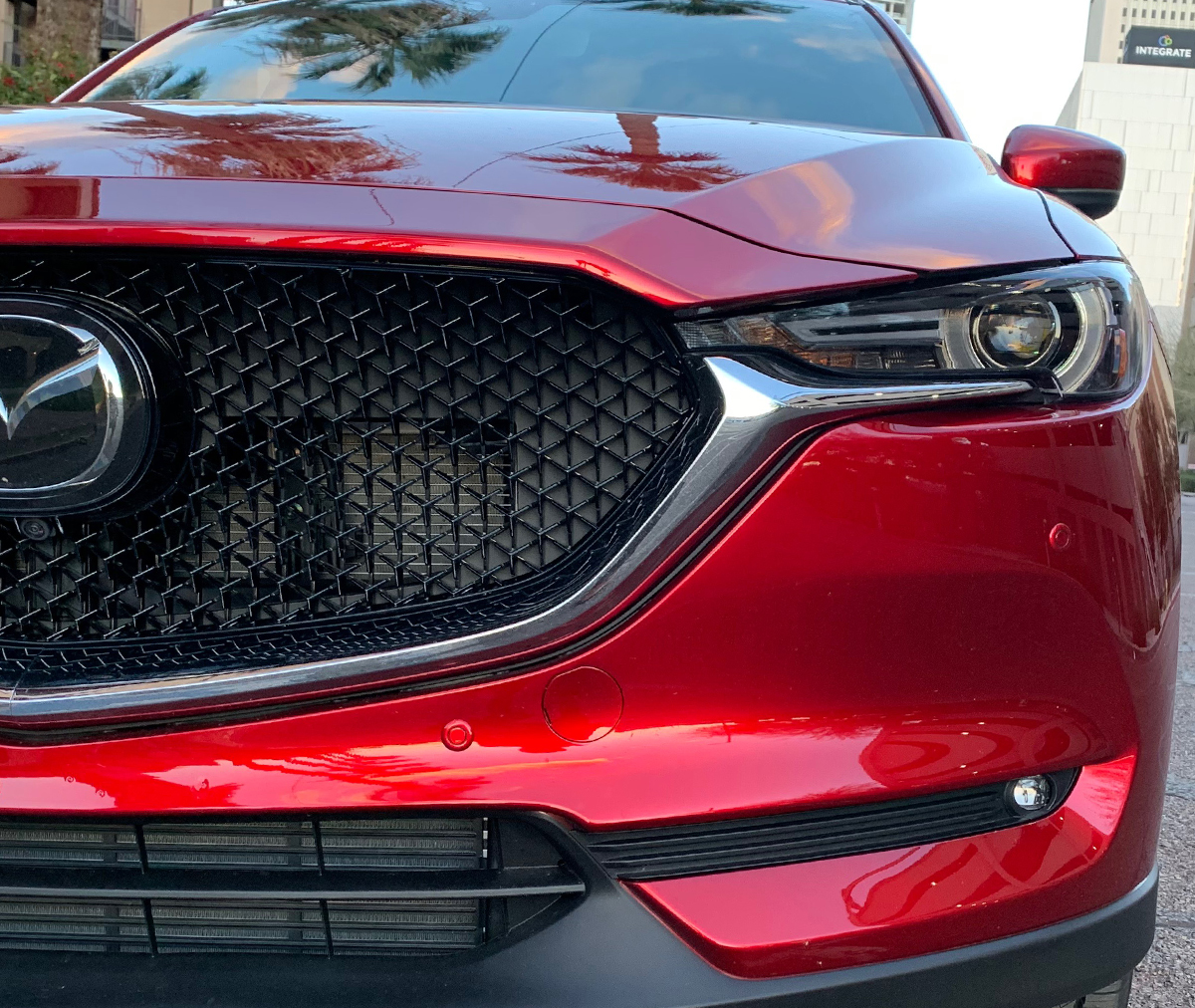 The compact SUV market is only going to get more competitive as Americans continue to shift away from cars and move toward crossovers and pickup trucks, which will drive automakers to get increasingly aggressive with designs and features.

Mazda may still be an underdog compared with some of the bigger automakers out there, but given the overall appeal of the CX-5, I expect to see a lot more of these revamped compact crossovers zipping down the highway soon. 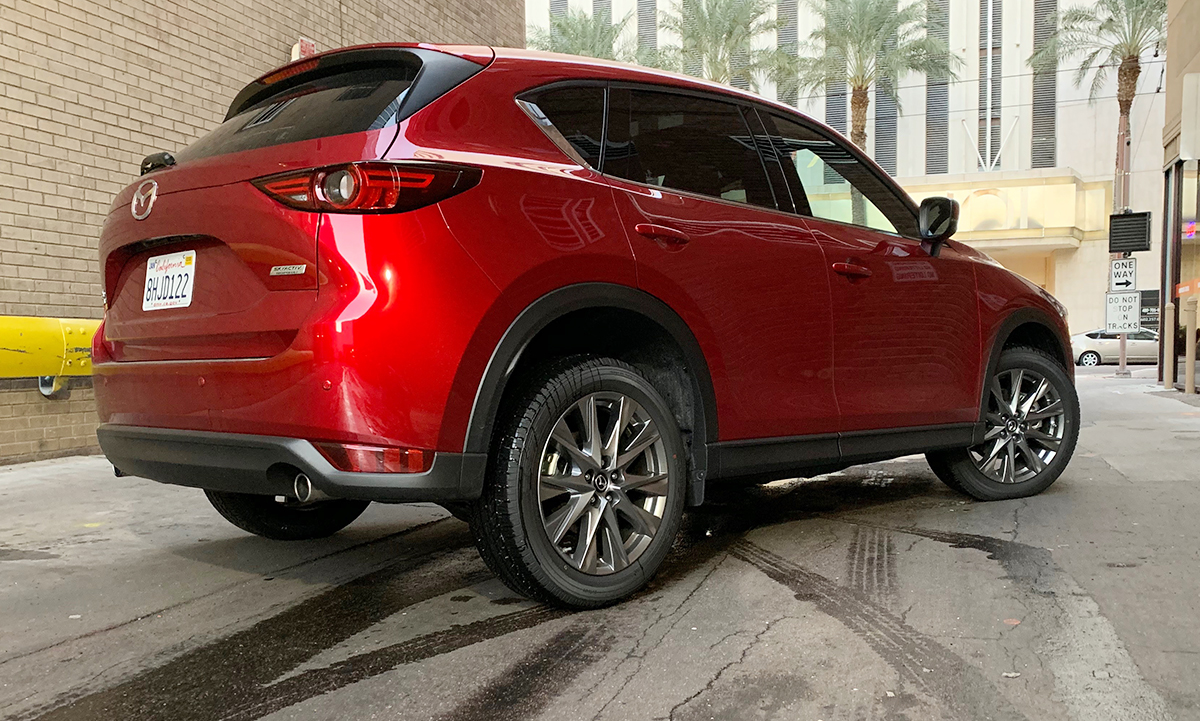