We’re all familiar with full-size truck commercials: Shots of a truck speeding down a trail, hauling massive loads and flying through the air, all set to the tune of a powerful, high-revving engine and a gravely voiceover saying, “This is the best truck ever.”

Of course, that’s just on TV. Trucks that end up on dealer lots are powerful, comfortable and capable, but tend to be less electrifying than what we see during the commercial break.

But what if I told you there’s a truck out there that performs like the ones on TV, minus the voiceover? That’s the 2018 Roush F-150 SC. 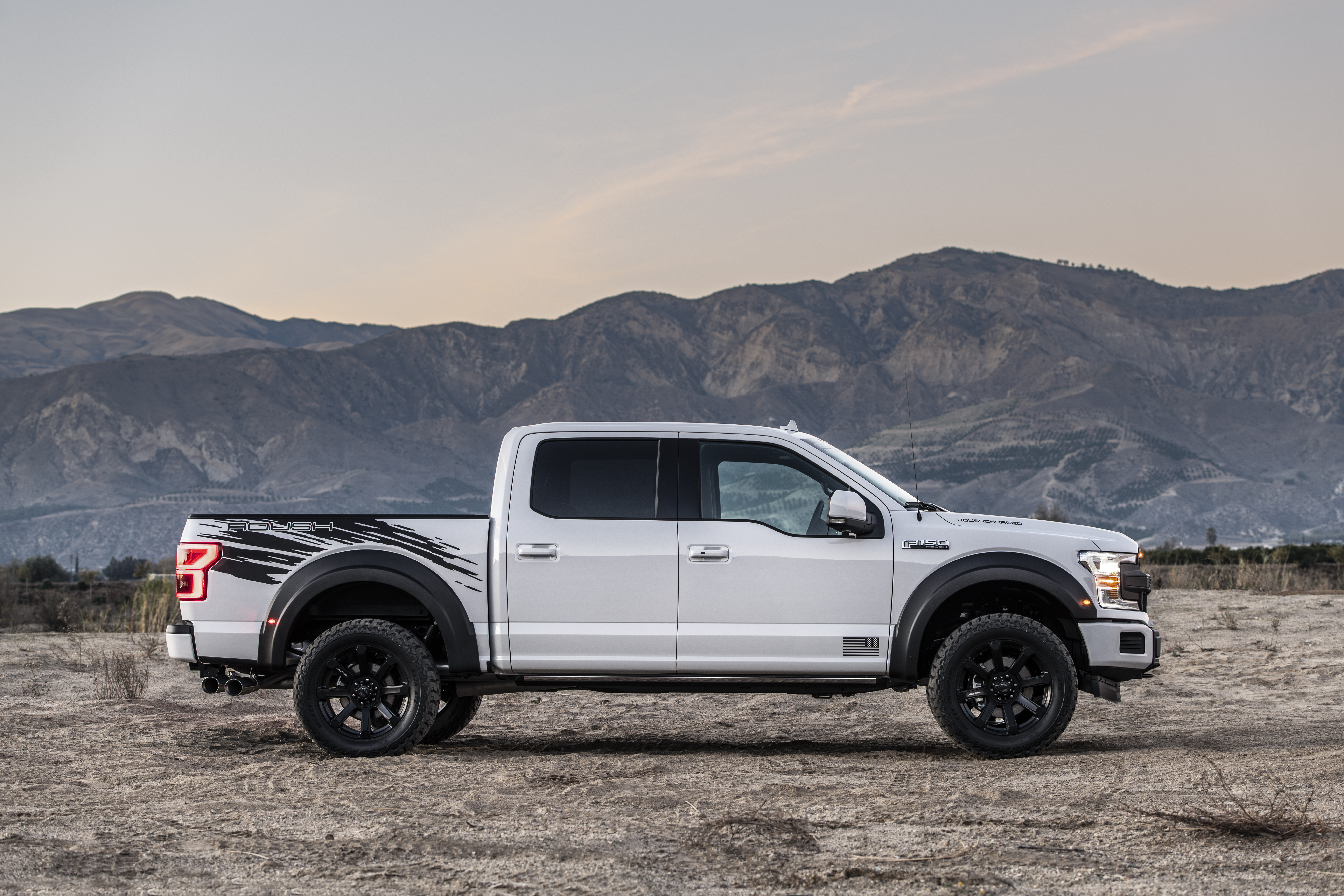 The Roush version begins life as an F-150 — which can be a fairly bare-bones truck, though Ford offers a slew of optional upgrades and trims. Rather than shipping the truck to a dealer, where it is purchased and taken to a modification shop, Roush instead gets the vehicles directly from Ford.

“We don’t look at ourselves as aftermarket,” Jack Roush Jr. said during the annual SEMA Show. He added that, unlike other shops, the modifications carried out by Roush are covered under Ford’s factory three-year, 36,000-mile warranty.

After Roush is done with it, the F-150 SC boasts an optional Roush-badged leather interior, a signature front grille not sold on the aftermarket, fender flares, customizable graphics and other touches.

Oh, there’s also the additional 255 horsepower and 210 pound-feet of torque added under the hood. 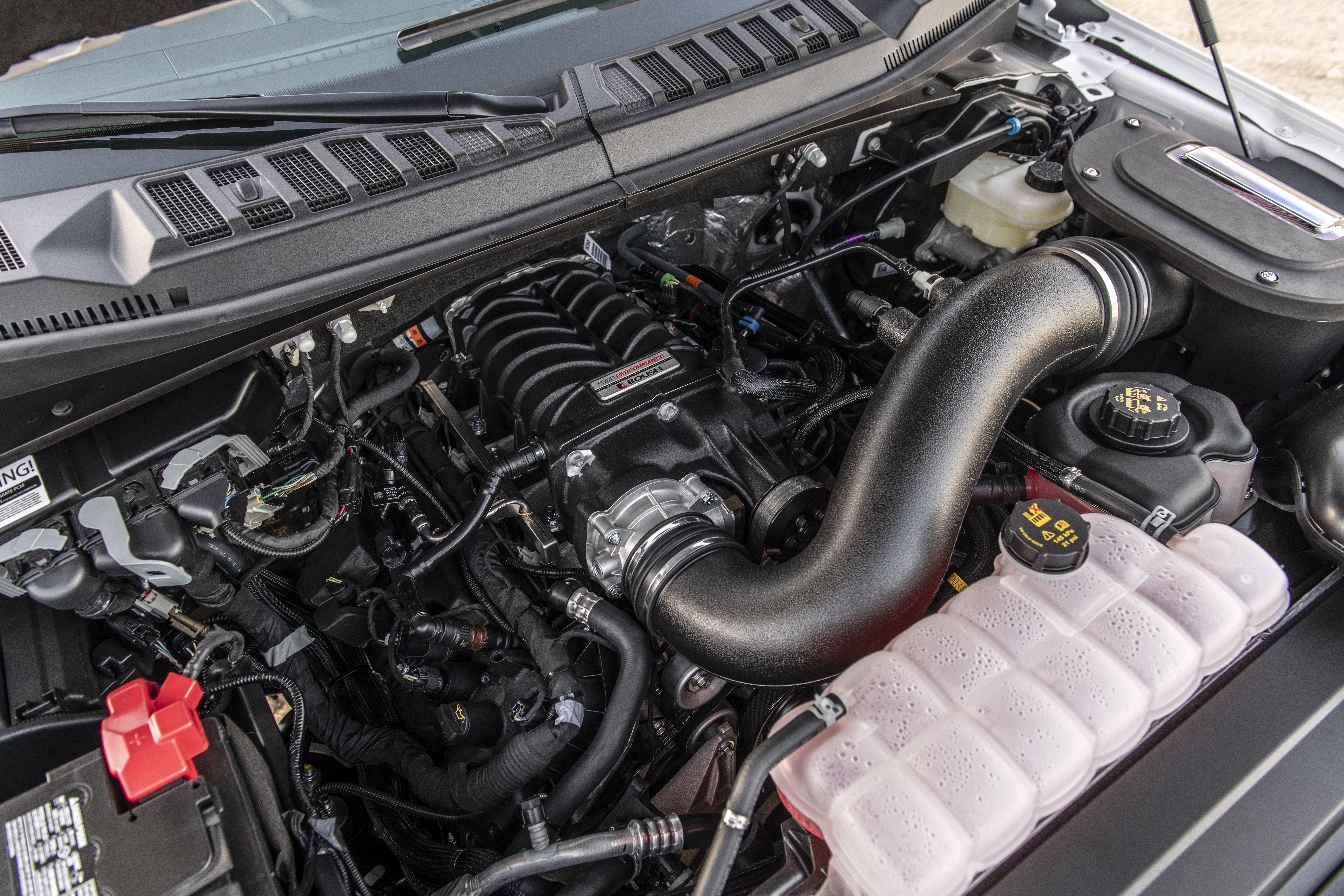 The result: The truck sprints from zero to 60 mph in just 5.5 seconds.

Driving the F-150 SC is a pleasure. As is all the rage, several drive modes are available, but I wasted no time and immediately set it to Sport. Power is offered nearly immediately when pushing the accelerator and, despite being 50 percent more than stock, is not overwhelming. The increased torque noticeably increases the performance of the nearly 5,000-pound truck and it’s all sorts of fun.

Given the amount of power on hand, cruising down the Southern California freeways was a test — not of my driving, but of my ability to keep the speed to a reasonable level. That challenge was only made greater by the Roush/Fox 2.0 suspension upgrade. 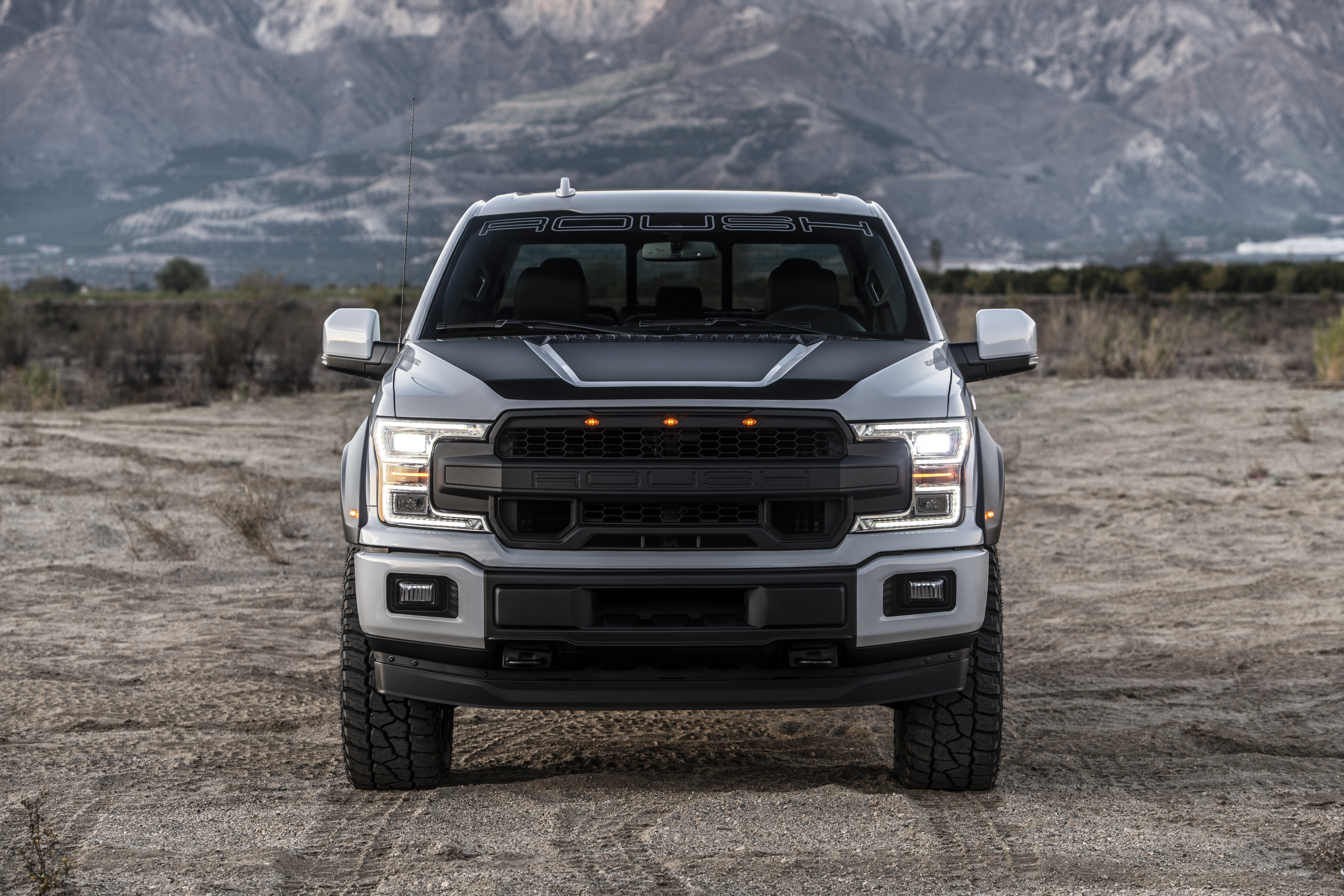 The suspension kit gives the truck a two-inch lift (a step automatically slides out to make climbing in the cab easier) and also levels the vehicle. Roush said the kit gives the truck better control in rough terrain. I, unfortunately, didn’t get the chance to test that claim, but I can attest to the suspension’s smoothness and commanding ride feel.

That ride is only accentuated by the interior. The Roush-modified truck I drove had the optional leather seating that was well-bolstered and offered all-day comfort. Should you want to drown out the engine noise (you shouldn’t), the truck retained its stock sound system, which provided good quality driving music. 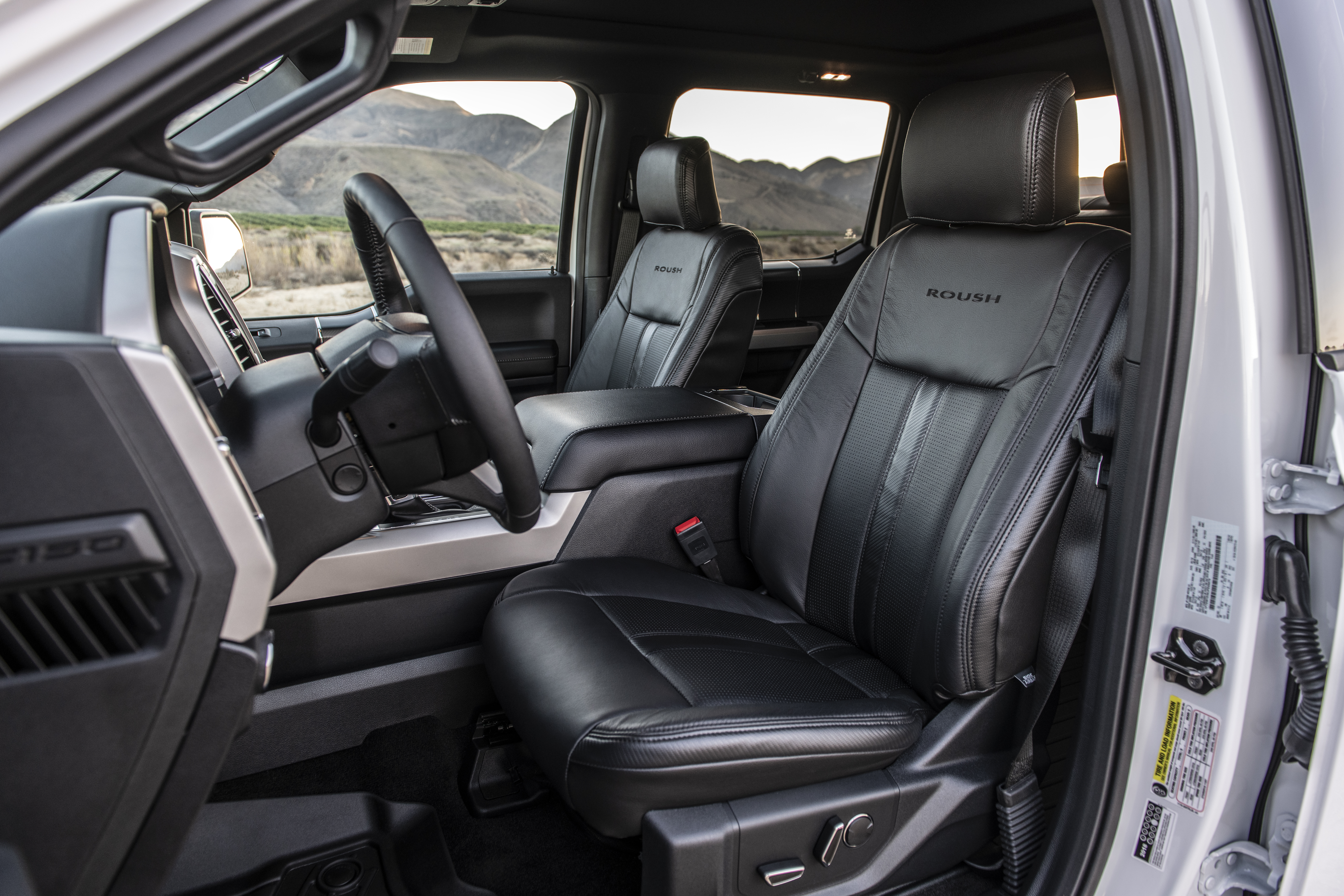 The engine is my favorite part of the F-150 SC, but the exterior is a close second. In addition to the suspension-altered stance, Roush includes a variety of touches to ensure that everyone around you knows you’re driving one of the baddest trucks out there.

On the front, Roush adds a front bumper cover and fender flares with accent lighting, as well as a grille with more lighting that is not offered as an aftermarket add-on.

“You can buy the grille, but it’s very expensive,” Roush Jr. said at the SEMA Show, laughing. “It comes with a truck.” 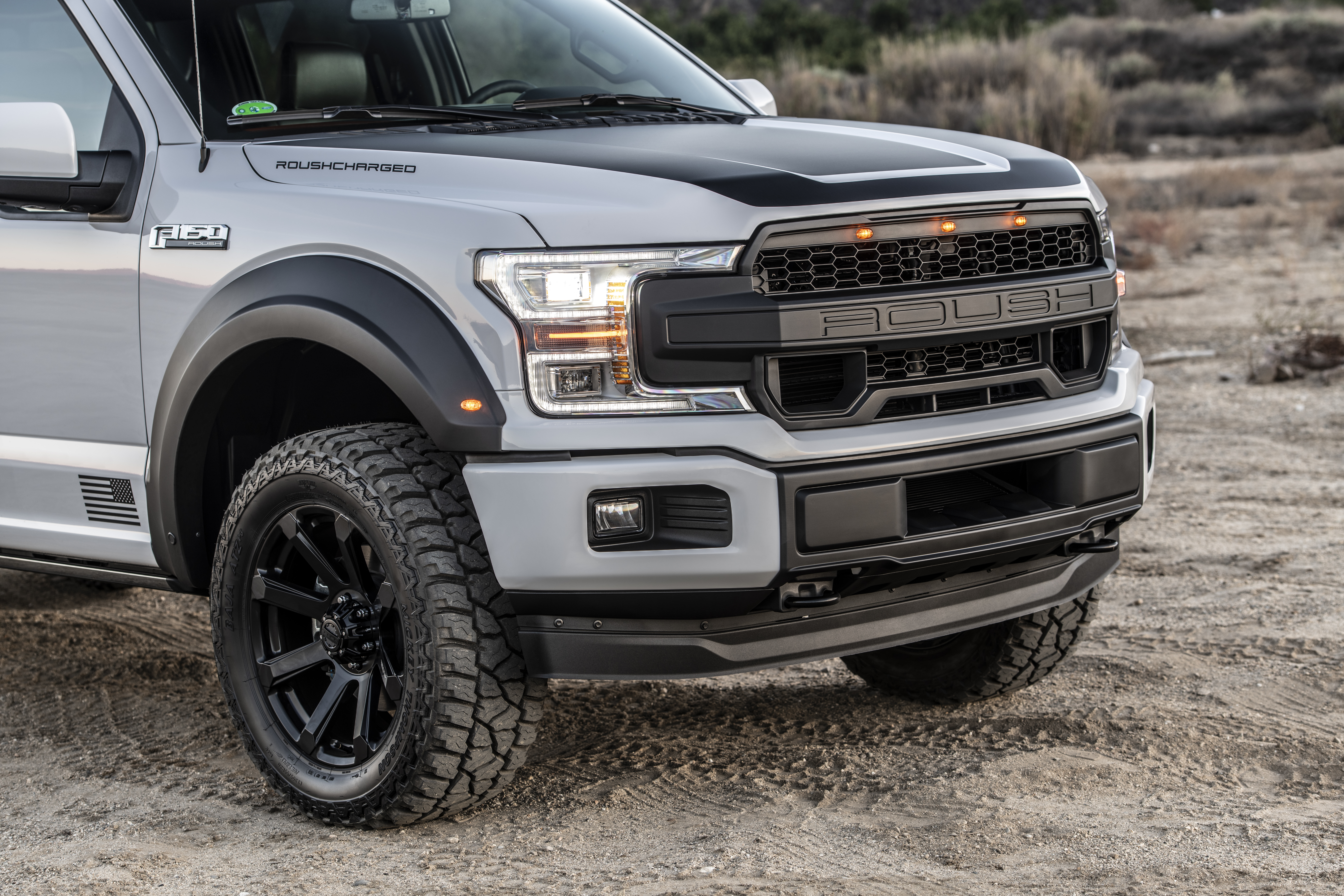 Heritage graphics are added on the side rockers, while the backend also benefits from the fender flares and a tailgate blackout graphic. The graphics are all made from tooled paint, not vinyl, which improves the look and quality.

Roush Jr. said the company made about 600 of the trucks last year. I imagine that number would be a good deal higher if it weren’t for the eye-watering $89,000 price tag that’s slapped on the fully loaded vehicles. Cars certainly are increasing dramatically in price, but spending close to $100,000 on a truck designed to take on trails will no doubt be off-putting for some.

In all, Roush is building one hell of a truck. The F-150 SC is fast, powerful, loud and ready to crawl over rocks and cruise down the highway. It’s capable of towing loads and creating those cool dirt sprays from the rear tires on a backroad. The signature look makes it stand out from the crowd.

You know, it sounds like something you’d see on TV. 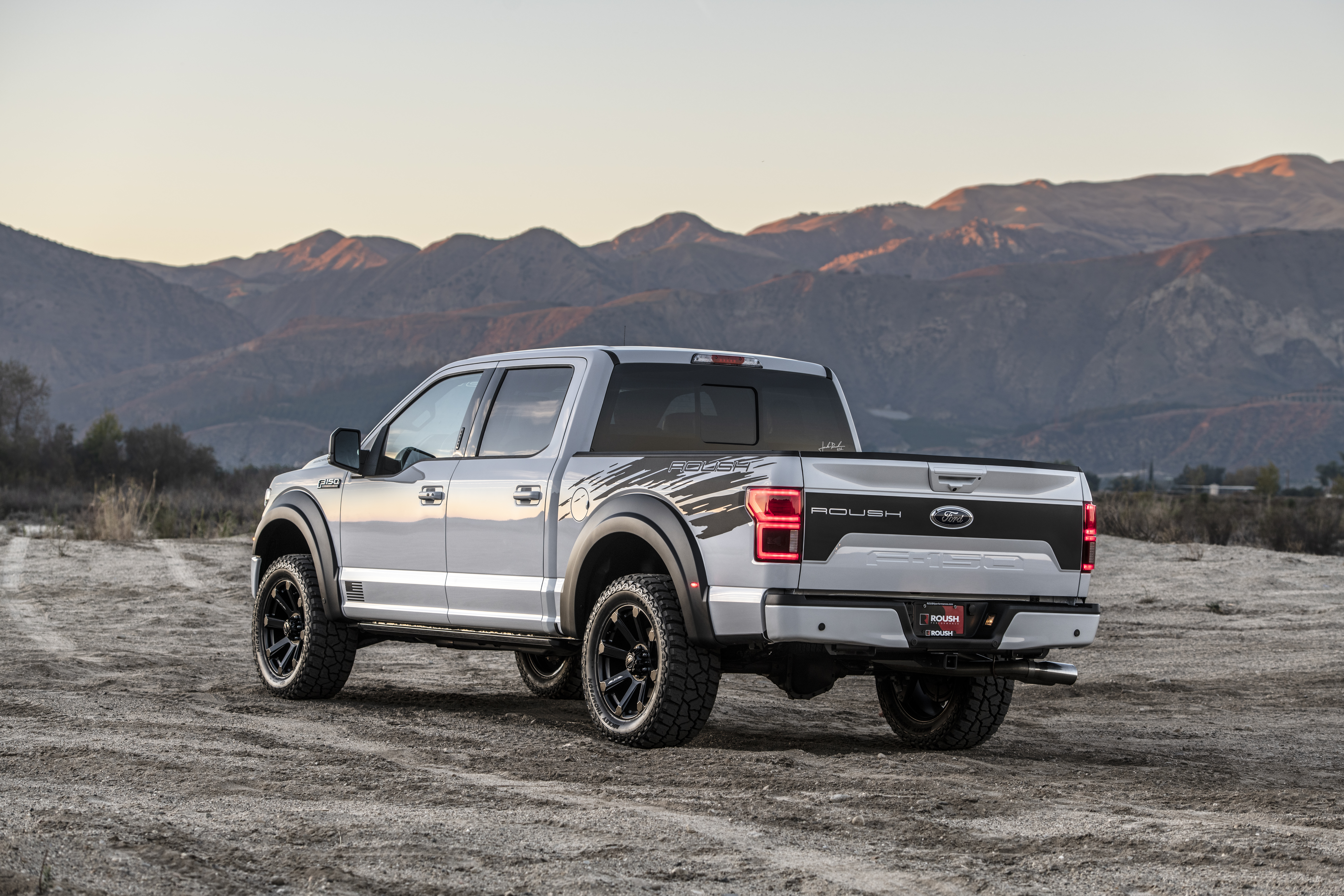