Without a doubt, the 2019 Lexus RC-F was designed to target those who are so brand loyal that they’re willing to ignore rival models that can offer more performance at a lower price tag.

It’s a heritage car, meant to be accommodating to those who have long-favored the Japanese marque but no longer want the four-door IS or GS because of their less-sporty designs. The RC-F, in a way, is like the former SC: Lexus filled its own market gap by offering a performance coupe that is not as expensive as the LC and isn’t a four-door, like the LS.

However, also like the SC, the RC-F is doomed to be eliminated unless it receives some updates. 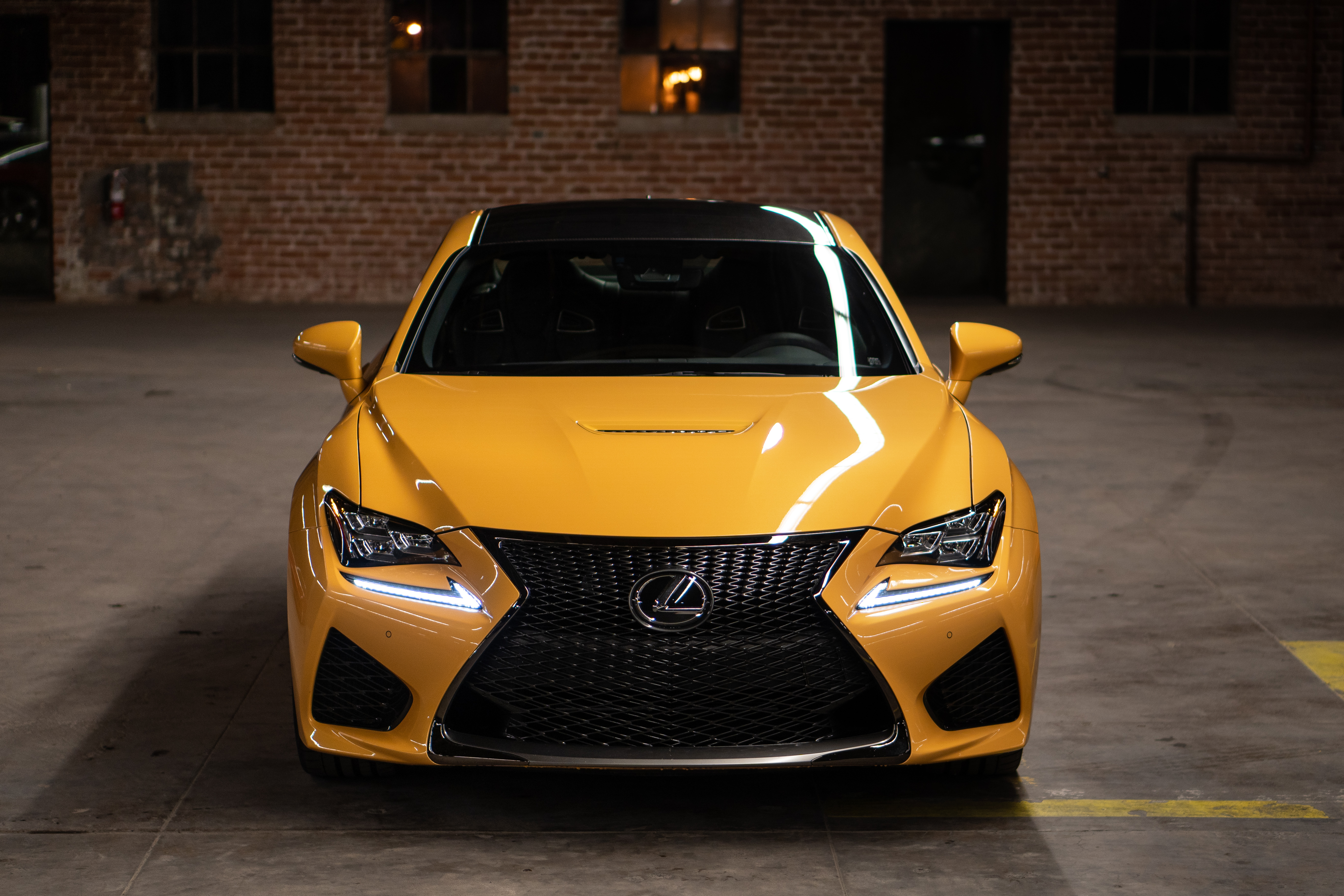 Featuring a 5.0-liter naturally-aspirated V8 capable of making 467 horsepower and 389 pound-feet of torque mated to an 8-speed automatic transmission — Lexus does not offer a manual option — the RC-F struggles to pace itself against competitors such as the twin-turbo BMW M4 and Mercedes AMG C63.

I drove an RC-F equipped with the performance package which adds torque vectoring rear control differential that distributes power between the wheels for more effective corning. It also adds a carbon fiber roof and spoiler and $5,500 to the price tag.

It’s still a Lexus, so luxury and comfort are required. You can select your driving mode — Eco, Sport and Sport S — using a dial near the shifter. When in Sport or Sport S modes, the change in handling is palpable. The F-Adaptive Variable Suspension has 30 different levels of stiffness that vary with the selected mode. The suspension paired with large Brembo brakes give a sense of confidence in using all 467 horsepower. It’s worth noting that Lexus uses the same chassis in the IMSA WeatherTech SportsCar Championship. 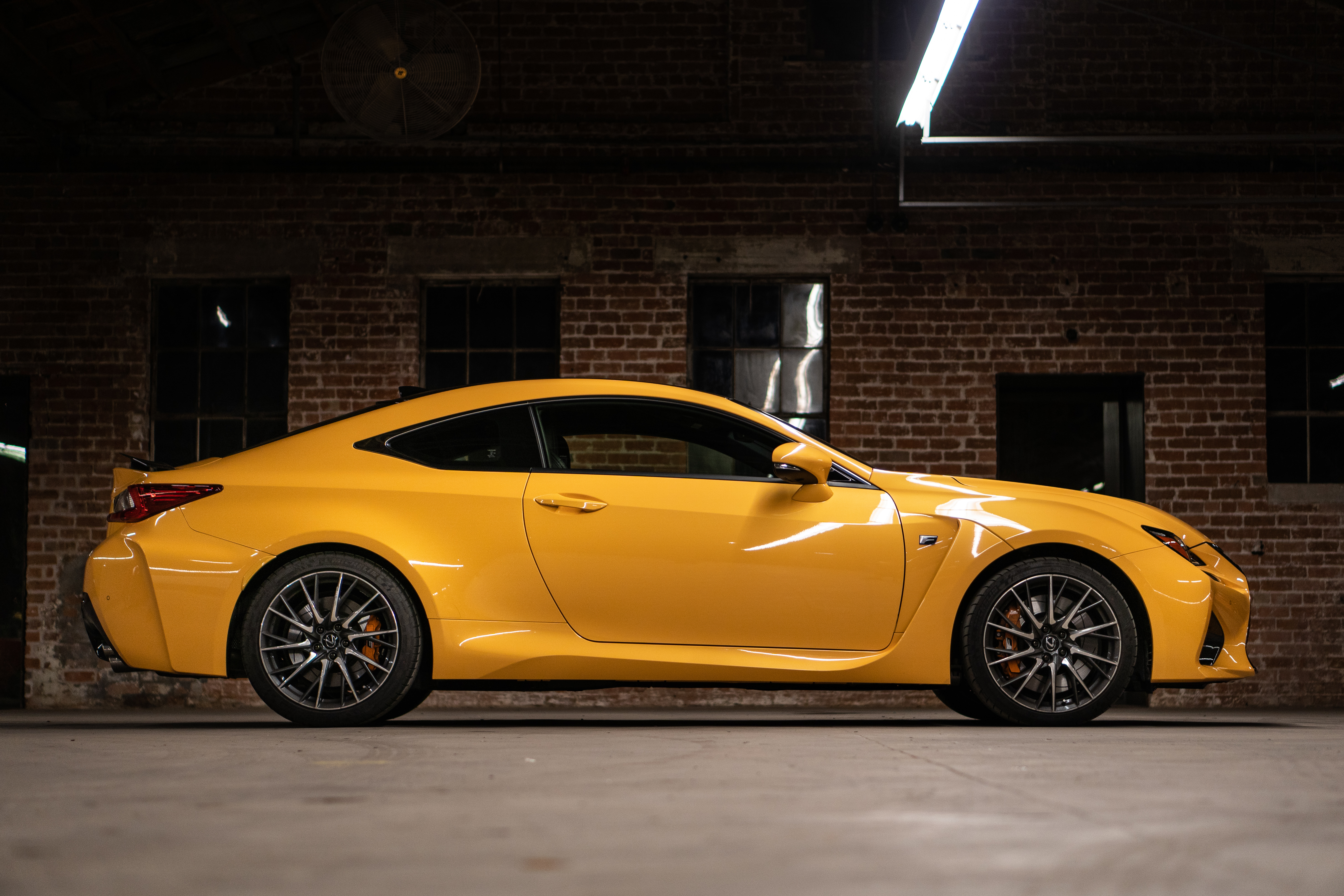 Rotate the dial to Eco and the ride is more comfortable, throttle response gradual and fuel efficiency improves; perfect for when you’re not feeling like driving a performance car (if that ever happens). My primary complaint regarding Eco mode is the delayed throttle response. If you need to make a quick maneuver, you better have one of the other modes at the ready or prepare for a noticeable delay.

It’s a wonder that Lexus didn’t drop its twin-turbo 3.5-liter V6 into the RC-F. The engine used in the LS 500 is capable of making 416 horsepower and 442 pound-feet of torque along with the 10-speed automatic transmission. It’s less powerful on paper, but the lighter, torque-ier engine would likely improve the driving experience.

Let’s talk about the overall exterior design, which is quite good but betrayed by its lackluster interior (more on that later). The headlights and taillights caught my eye first. The RC-F, with its sharply designed, triple-beam headlights and a unique three-projector design, gives off a futuristic feel. The “checkmark” look is continued in the taillights and accentuates the body lines. 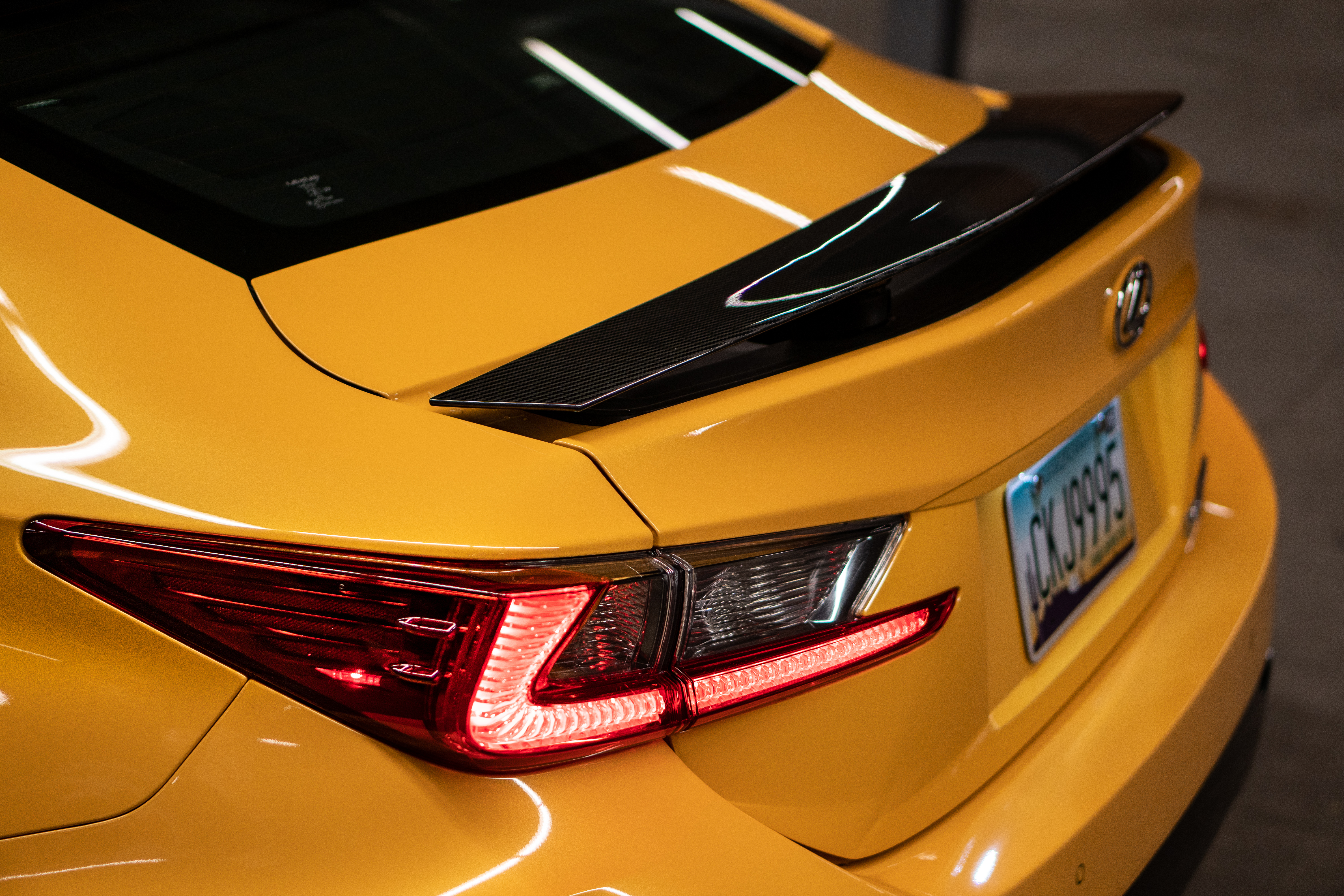 The RC-F has just enough design imbued in it to prevent it looking like a concept car.  The large “spindle” grill is distractingly oversized — distractingly so — but the sleek lines that run from it up into the hood pull the eye away quickly enough. The side profile is much easier on the eyes. Subtle cooling ducts behind the front wheel wells flow into the side skirts and a slight indentation in the rear bumper that moves the eye up to those flashy taillights or down to the quad-exhaust.

Interior design is very similar to its four-door counterparts, save for seats that supposedly are more bolstering in high-G situations. The overall feel of interior materials doesn’t match the $60,000-plus price tag. Lexus used a material called “NuLuxe” in place of natural or synthetic leather that doesn’t live up to the definition of luxury.  The material isn’t as soft as leather and doesn’t have the same visual depth. 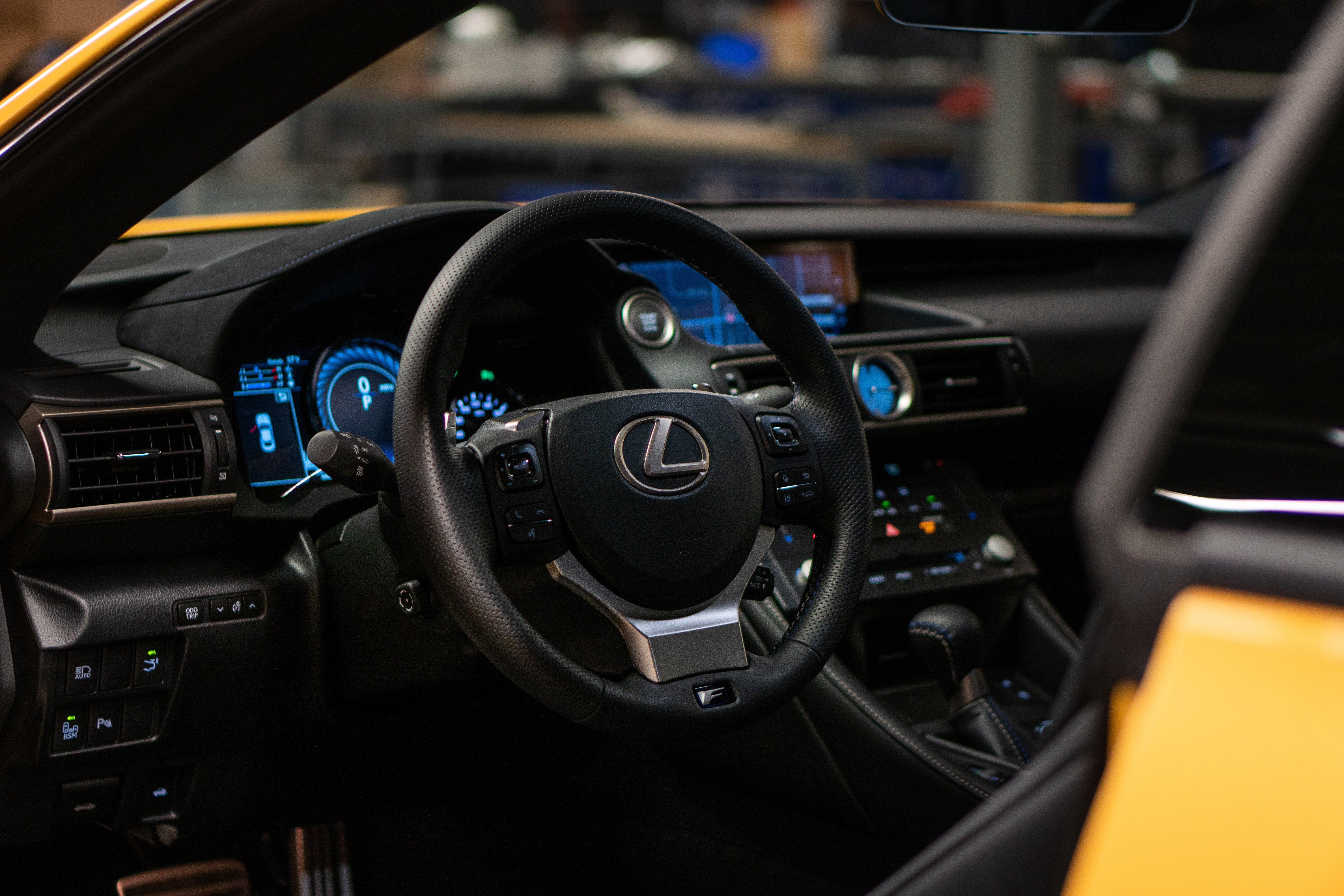 Other marques offer higher-quality materials and modern conveniences such as in-vehicle Wi-Fi hotspots or wireless chargers for cellphones. Lexus hasn’t caught up to that yet.

The gauge cluster and multi-functional display is sportier and visually appealing with a full-color LCD that has added performance data, including a visual representation of the torque distribution. The cluster changes appearance depending on the drive mode.

On the plus side, RC-F is a user-friendly sport coupe that can be used as a weekend warrior or daily driver with the rotation of a dial. It likely won’t have any significant issues until well past 100,000 miles, much like other Lexus vehicles. It also costs less than the LC 500.

On the negative, it lacks in performance and true luxury touches that other marques offer for a lower sticker price. Unless you’re a true Lexus enthusiast, I imagine you’ll be spending your money on a different car. 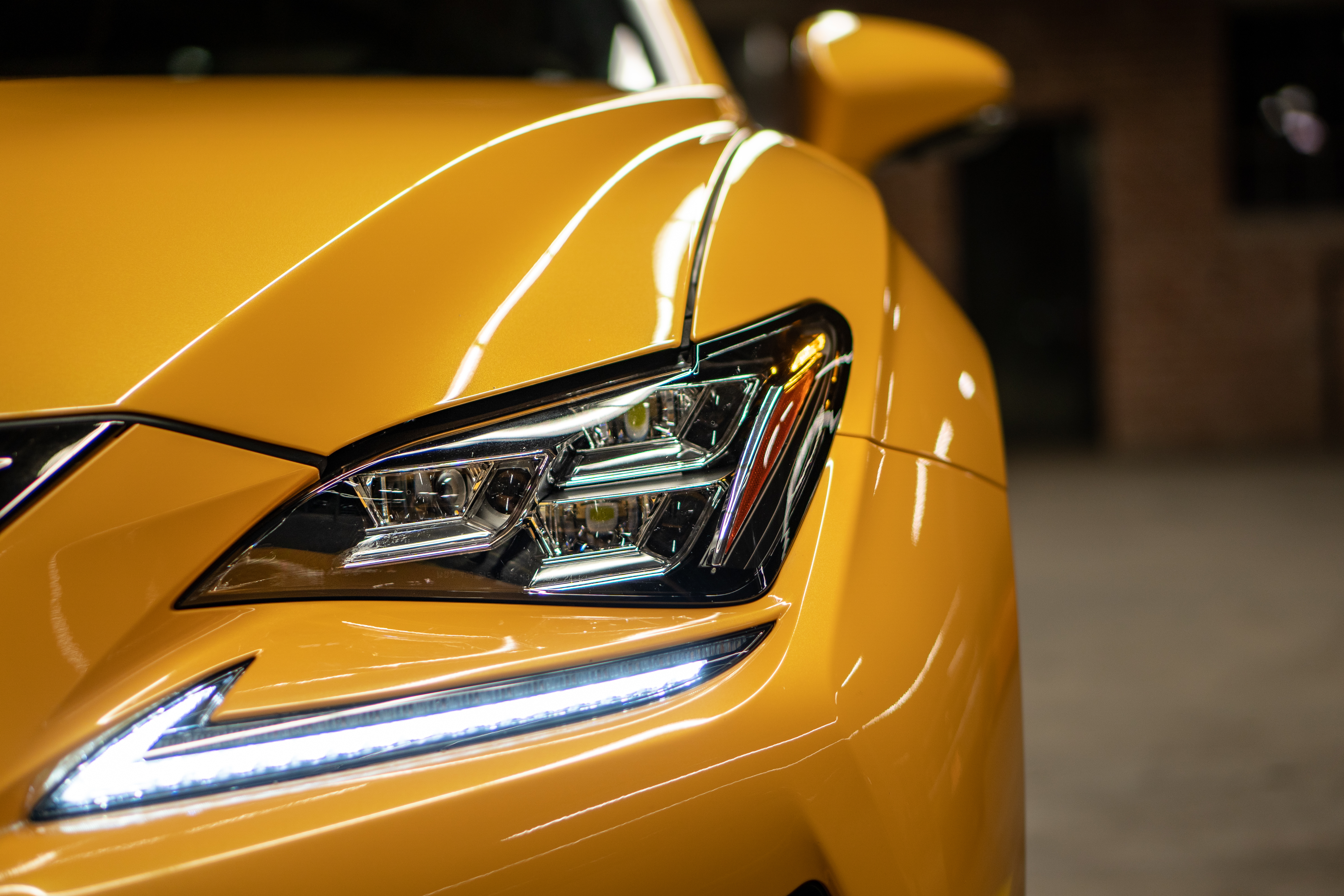