From sci-fi to roadworthy, but how soon? 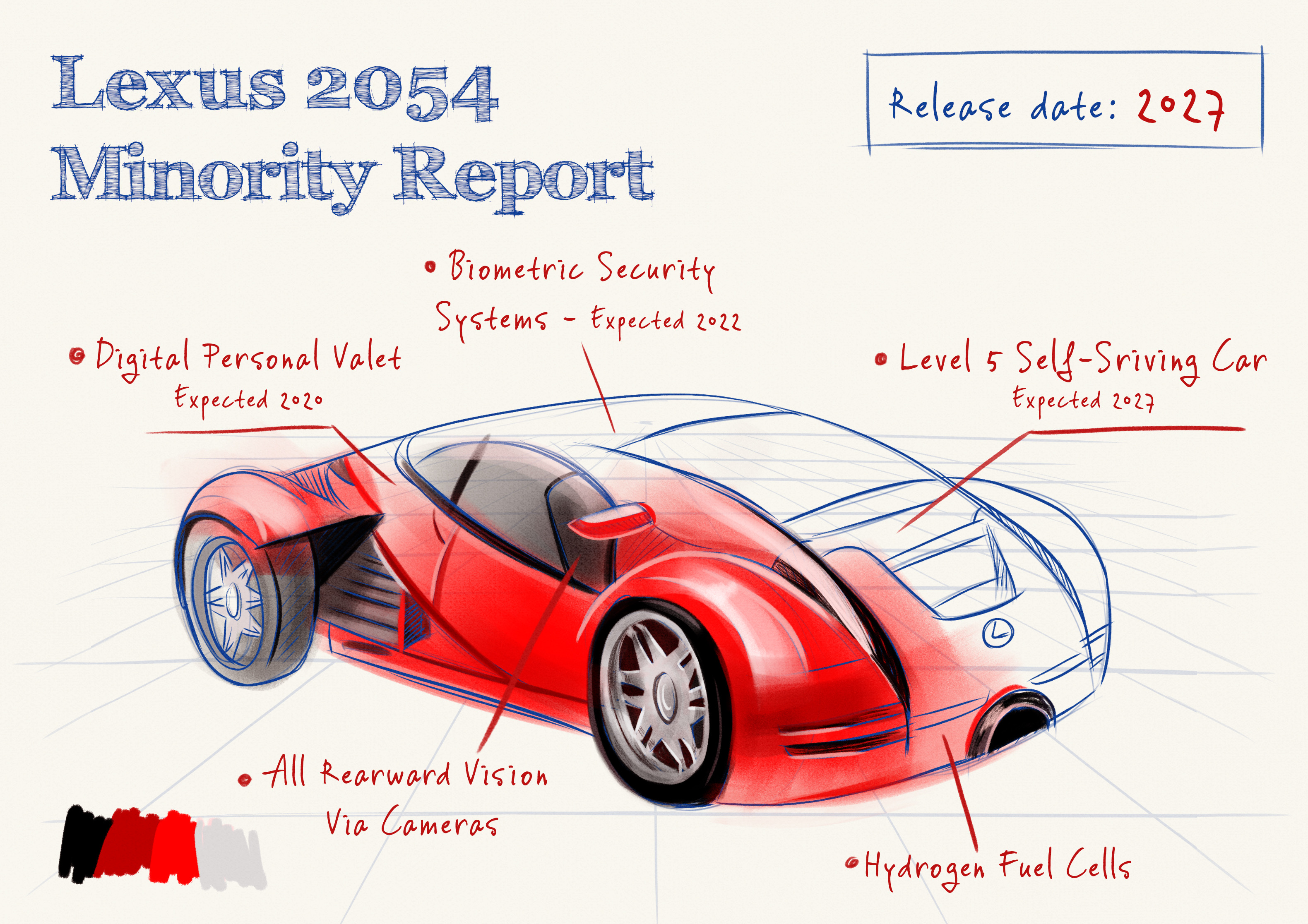 Back in 2002, movie director Steven Spielberg and automaker Lexus worked together to create a vehicle that predicted what cars might be like in the year 2054. That car, the Lexus CS 2054, was “driven” in Minority Report by actor Tom Cruise; driven in quote marks because the car actually drove itself.

But while such vehicles weren’t expected until the middle of this century, a research project undertaken by Leasing Options, a British vehicle-leasing company, says that Lexus CS 2054-like cars will be on the road by 2027.

“Who would have thought that 2027, just eight short years away, could be the year we see the Lexus 2054 from Minority Report become commercially available,” the company said in its news release last month. “That’s a whole 27 years earlier than Spielberg had predicted, seeing as the film was set in 2054.”

The Leasing Options team picked its four favorite cars from such science-fiction films and television programs and calls on experts to help it analyze “each car’s futuristic super-powers against our real-life technological capabilities.”

The result? “They are likely be available much sooner than you may think,” the company said in answer to its own question: “When will we be able to drive a car like KITT?”

“Knight Rider led to a whole generation yearning to have a car as cool as KITT. A car that talked, thought and could help you do pretty much anything as you fought crime together,” the company reports.

“With advancements in car technology picking up speed every year, we think it is the perfect time to try and figure out when exactly a car like KITT could be hitting our roads. We’ve also done the same for the Audi RSQ from I, Robot, the Lexus 2054 from Minority Report before finishing with the Spinner from Blade Runner.

“To work this out, we’ve looked at each futuristic aspect of these cars and found the best prediction as to when they will be commercially available. Obviously, not every feature of the fictional car will be practical, desirable or even legal. So, we’ve focused on the car’s most important features and figured out when they might be available.” 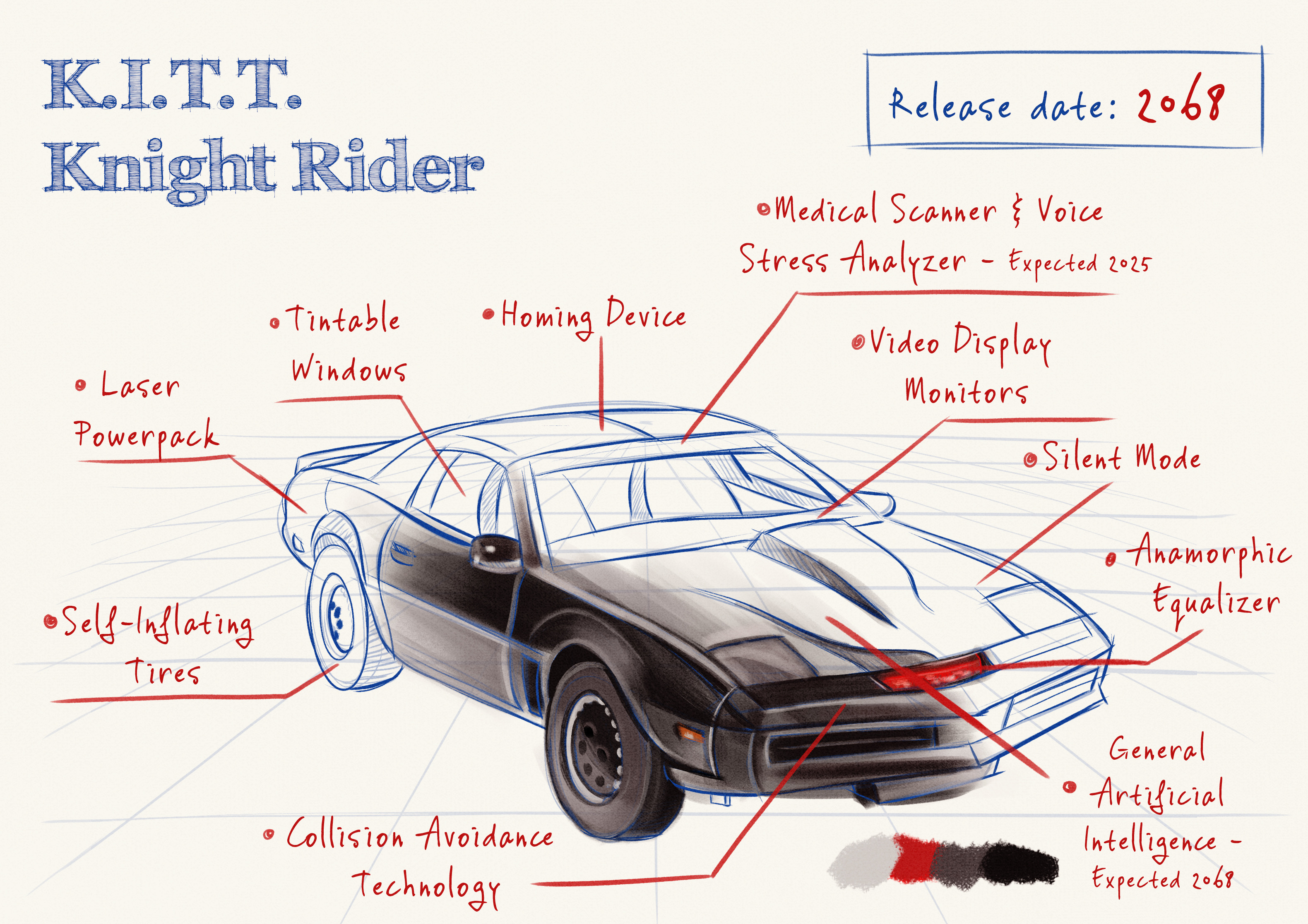 “Unsurprisingly, a lot of the technology designed in Knight Rider now exists and has often been surpassed. Yet, largely due to the complexity of artificial intelligence, we’re still a long way off driving a car like KITT.

“Elon Musk has been upfront about wanting to create a Tesla that utilizes A.I. In fact, he took the time out to answer in the affirmative when outright asked whether we’d get a KITT-like A.I. in Tesla cars in the near future.

“Sadly, we may have to wait a little longer than Elon is suggesting. KITT wasn’t just any old AI, he was a ‘General Artificial Intelligence,’ meaning he could perform any intellectual task a human could.

“So, when will General A.I. be achieved? A survey of experts in 2018 returned the median answer of 21-50 years. Given the steps required from creating a General A.I to making it commercially available and then figuring out the steps necessary to put it in a car, we’re taking the upper end of that estimate and calling it 50 years.”

Regarding specific features, Leasing Options found that KITT’s anamorphic equalizer (infra-red night vision) was available on the 2000 Cadillac Deville; that its silent mode is present on electric vehicles; that Google’s driverless cars have a homing device; that tint-adjustable windows, self-inflating tires, video-display monitors, and collision-avoidance technology, and hydrogen fuel cell vehicles already exist; and that the U.S. Navy has deployed laser weapons — though don’t expect to see them on any vehicle you might purchase at your local dealership.

However, the research found, onboard medical scanners and voice-stress analyzers aren’t likely until 2025, when Ford expects to put its heart-rate monitoring seat into production.’ 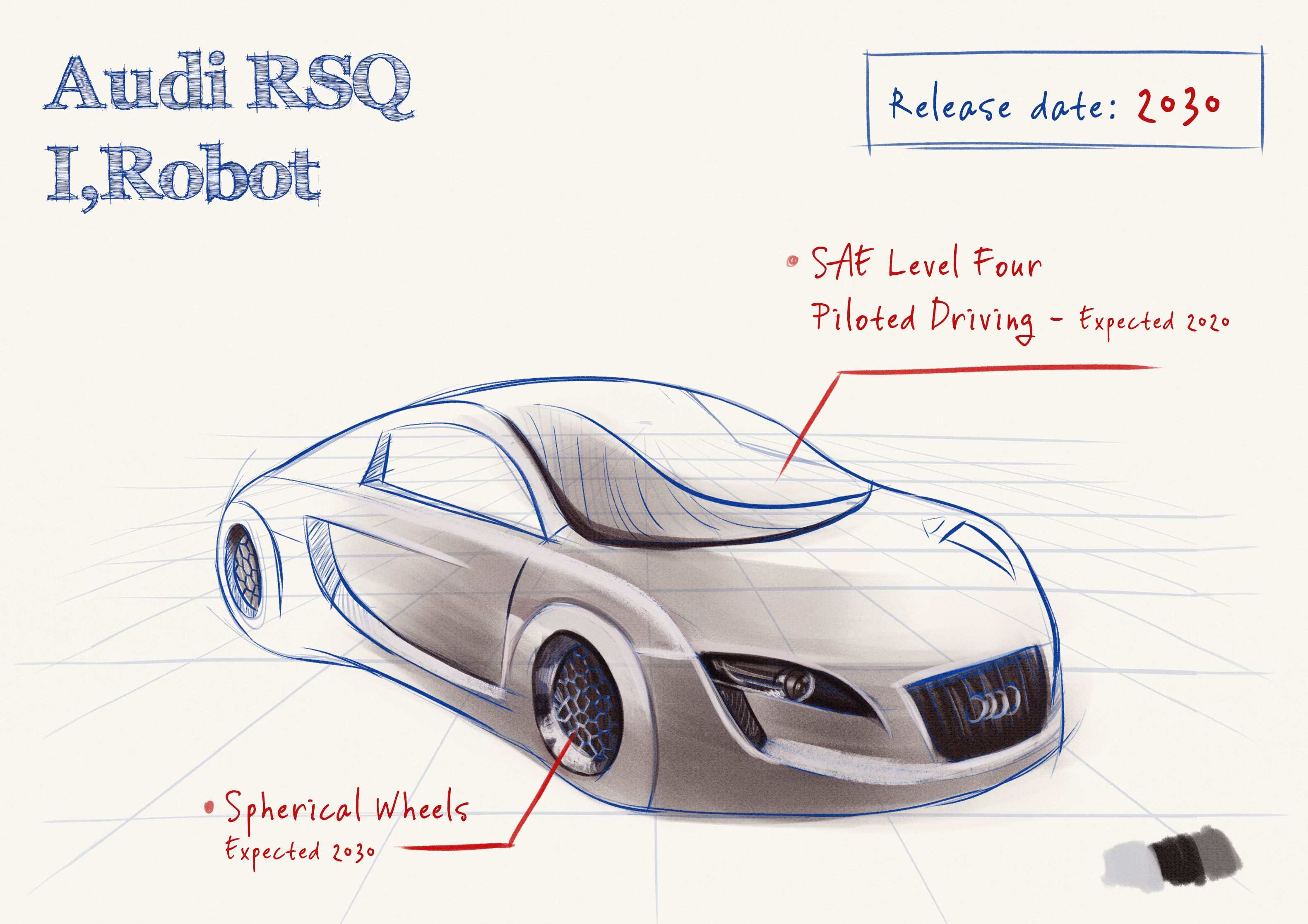 “The Audi RSQ was probably the most memorable part of the otherwise forgettable Will Smith film I, Robot. The car was a nifty piece of product placement for Audi, who built a mid-engine concept car for the movie. It was designed to be a beautiful car that was both futuristic but still realistic.”

Of that car’s features, look for Level 4 self-driving in 2021, Leasing Options says. Meanwhile, the Audi’s spherical wheels, capable of moving in any direction, are part of Goodyear’s Eagle 360 Urban concept project.

“Like many Tom Cruise films, Minority Report is a great looking movie that was a little light on substance,” says Leasing Options. “What didn’t lack substance was the Lexus 2054. Designed for the movie in 2002, the Lexus 2054 was meant to look like a car from the 2050’s. Instead, it looks like we could own it by the end of the next decade.”

The Lexus was a Level 5 self-driving car, and they’re expected by 2027. As with KITT, hydrogen fuel cell vehicles have been on the road for several years, and rear-vision camera systems have replaced mirrors on the Lexus ES in the Japan.

Digital personal valet is coming around 2020 and biometric security systems are due in 2022. 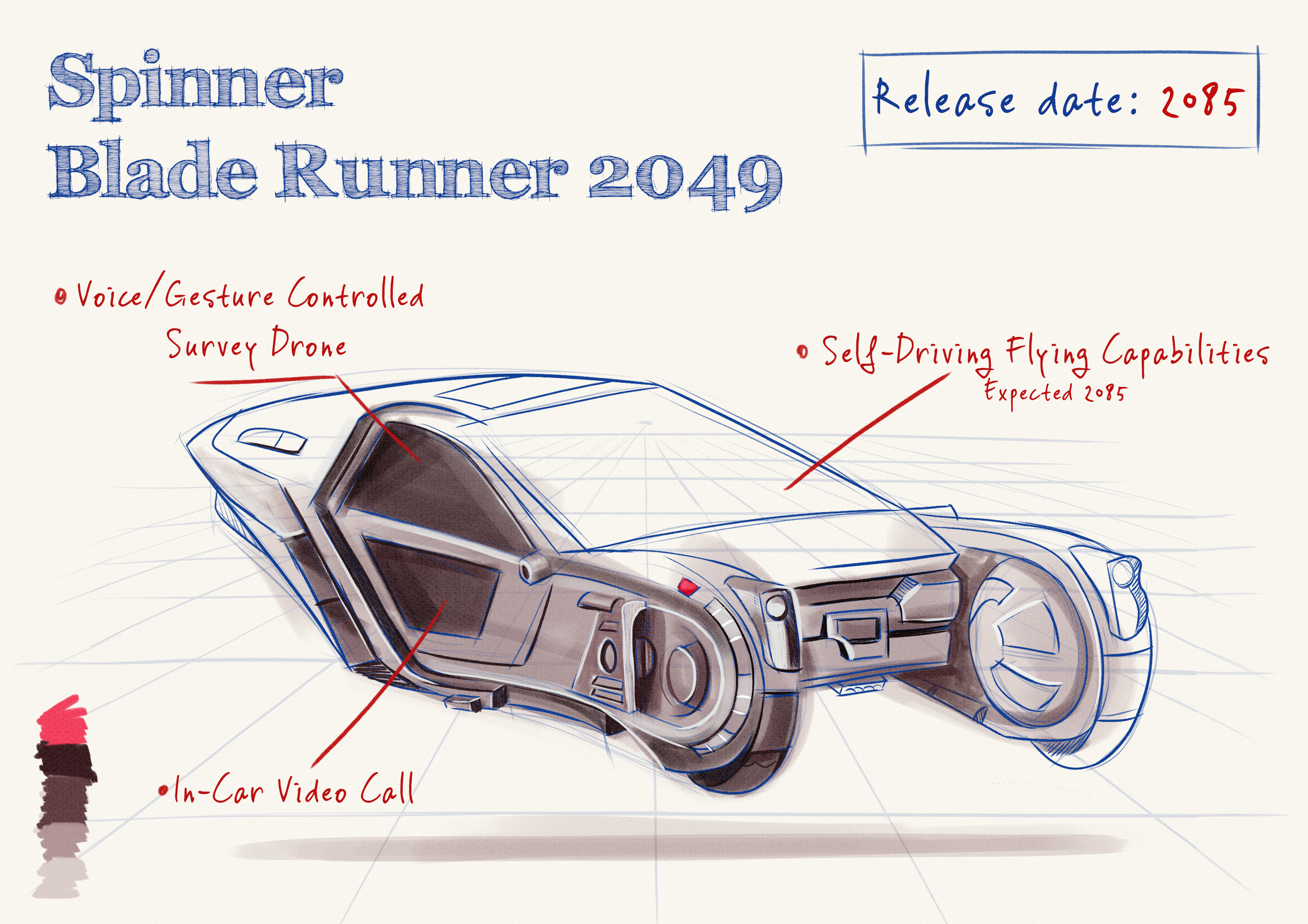 “The coolest flying car ever to be seen on screen,” says Leasing Options. “The Spinner perfectly encapsulated the gritty, futuristic, cyberpunk world of Blade Runner. We’ve gone for the Spinner as seen in Blade Runner 2049, rather than the original, as we think it’s cooler.”

But what about self-driving flying cars?

“To make something a true flying car like a Spinner, it needs to be able to drive on the ground, fly and be able to achieve vertical takeoff,” the research found. “There are always reports of flying cars about to be introduced… However, all these cars will require a pilot’s license and when you use them to fly, you will have to follow predetermined routes, landing and taking off from predetermined airports or landing pads.

“That’s not what a true flying car is all about. A true flying car needs to be able to take you from the door to right outside your work. In order for this to take place, it’s not necessarily the technology that is holding us back. It’s the lack of real world and legal infrastructure. Our cities and laws are not set up for all of us to be flying to work. To start with, no government is going to let just anyone fly a car without a license and checks, so they will have to be level five self-piloted.

“Given that level-five self-driving cars aren’t expected to have near complete market penetration until 2049, and all of the legal and real-world hurdles to be dealt with, it’s touch-and-go whether it’s plausible that we’ll be getting a car as cool as the Spinner much before the turn of the century.

“With that in mind, we’ve been optimistic and said 2085. By which point we may actually have replicants to worry about…”