The first Sunday Scramble of 2019 drew a record 7,000 people to England’s Bicester Heritage, a former military air base that has been converted into a collector car center.

“The January Scramble is always a highlight of the year for us, not just to see who is out in their classics but also to get the first New Year Sunday off to the best possible start,” said Dan Geoghegan, Bicester Heritage’s managing director. “We were taken aback by the attendance and support, not least to see so many families and fabulous motorcars: the classic car world is clearly in excellent health.”

Another Sunday Scramble is scheduled for April 28. 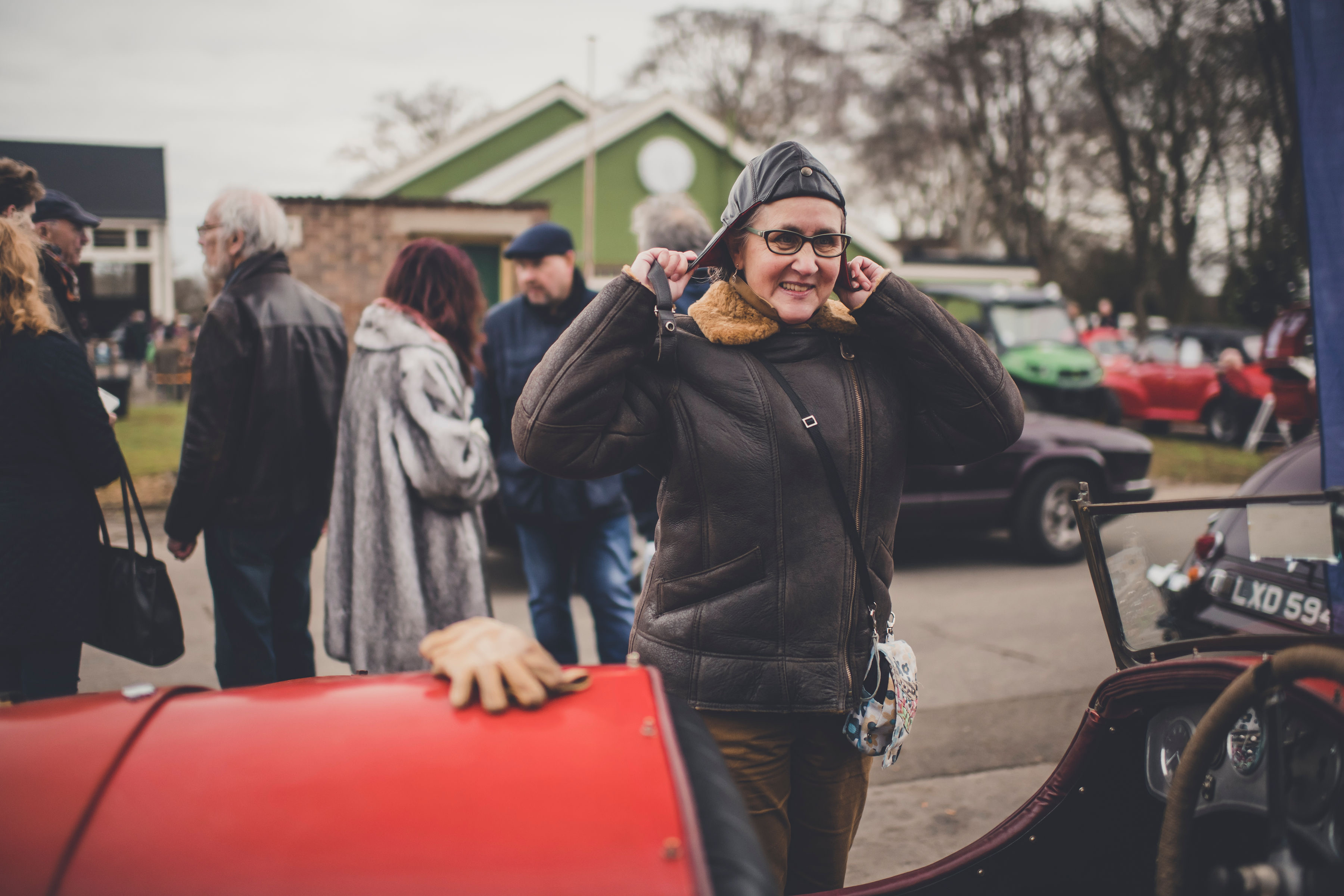 On January 24, and running through May 26, the Museo Nazionale dell’Automobile in Turin, Italy, will host a special exhibition, “Marcello Gandini. Genio Nascosto (Hidden Genius),” which will feature not only the automobile designer’s vehicles but will provide a broad portrait of the man who not only designed such amazing vehicles, but new ways of producing them.

The exhibit will include documents and drawings as well as such vehicles as the Stratos Zero, Lamborghini Marzal, Alfa Romeo Montreal and Carabo, Maserati Khamsin, Trident and Lancia Stratos HF, many of them coming on loan from private collectors and museums around the world.

The Petersen Automotive Museum in Los Angeles will rename its third floor, previously known simply as the “History” floor, to commemorate a $5 million donation from the Otis Booth Foundation. The gift is the first to be accepted during the museum’s 25th anniversary year, officials said.

The Booth foundation was founded in 1967. Franklin Otis Booth Jr. was chairman of the board of the National History Museum of Los Angeles, which helped launch the Petersen. Booth also was a newspaper executive, LA investor and philanthropist.

The National Corvette Museum in Bowling Green, Kentucky, has announced the members of the Class of 2019 to be inducted into the Corvette Hall of Fame on August 30. The trio comprises racer Briggs Cunningham, Corvette designer Tom Peters, and enthusiast Dollie Cole, who also was the wife of then-GM president Ed Cole.

Last week, we reported that the Royal Automobile Club’s Pall Mall clubhouse will be the site for the unveiling February 5 of 25 paintings done under the theme, “Ferrari in Art: The Sporting Legacy,” and celebrating the Italian company’s 70-year history.

The debut is a one-day, by-invitation event, but a public exhibit is being considered. Also, the original art will be for sale, but only as a 25-piece collection. In addition, a box set of 25 prints will be offered for sale to benefit Jackie Stewart’s Race against Dementia charity.

A previous and similar art project, 32 paintings featuring the World Driving Champions, was purchased by one of those champions, Sebastian Vettel.

Automotive Hall of Fame, Class of 2019

The Automotive Hall of Fame in Dearborn, Michigan, has announced its 2019 induction class: Sergio Marchionne, the late chief executive of Fiat Chrysler Automobiles; Janet Guthrie, the first woman to qualify as a driver in the Indianapolis 500; Richard “Dick” Dauch, co-founder of American Axle Manufacturing; and Patrick Ryan, creator of the first auto dealership finance and insurance department. The induction ceremony takes place July 18 in Detroit.

Too cold for a cruise-in? Not in Cleveland, where the Crawford Auto-Aviation Museum hosts a special edition of Crawford, Coffee & Cars: Winter Beaters from 8 until 11 a.m. on Saturday, January 19.

The winter speaker series at the Gilmore Car Museum in Hickory Corners, Michigan, continues Sunday afternoon with “The Men That Made Henry Ford Famous,” by automotive historian Don LaCombe.

“From Gas Station to Space Station: How NASA Conquered Low-Earth Orbit” is the title for a special exhibit running January 14-July 30, 2019, at the National Corvette Museum in Bowling Green, Kentucky, where the museum and NASA will celebrate the 50th anniversary of the moon landing.

Another “Legends of Racing History” event is scheduled January 17, 2019, at the Automobile Driving Museum in El Segundo, California, where a reception from 11 a.m. until 1 pm. will celebrate the display of the 1954 Sutton Jaguar.

On January 19 and 20, the Newport Car Museum in Rhode Island stages a hoods up weekend showcasing the powerplants under the hoods of more than 70 vehicles.

The Owls Head Transportation Museum in Maine will show The World’s Fastest Indian movie on  Saturday, January 19 at 6 p.m. as it opens its Reels & Wheels winter film series.

The Simeone Foundation Automotive Museum in Philadelphia hosts its inaugural “Soda Bottle Grand Prix” from noon until 1 p.m. Saturday, January 19. The event includes a tour of the museum and the construction of compressed air-powered bottle-rocket cars that will race on a 65-foot drag strip track. The event is open to students age 10-16, who will be able to take their cars home with them after the races.

The National Packard Museum in Warren, Ohio, will hold one of its Coffee & Donut educational seminars  Saturday, January 19 on restoring a Chevrolet Corvette. The event, featuring Carl Carbon, who restored his first Vette when he was 13 years old, will describe the restoration process and available resources. The program begins at noon.

Weather permitting, the staff from Greg Shandel Construction and a group of tool-toting volunteers will do some needed maintenance work beginning at 10 a.m. on Saturday, January 19 at the California Agriculture Museum in Woodland, California.

Zombie apocalypse? You’ll see more than fiberglass-bodied sports cars if you visit the National Corvette Museum in Bowling Green, Kentucky, January 25-26. The museum will be the host site for the Vette City Con, a horror/pop culture/sci-fi event.

“Tucker: How It All Began” is the subject of a gallery talk on January 26 from 10 a.m .until 11:30 a.m at the AACA Museum in Hershey, Pennsylvania, where speakers will include Tucker historian Mark Lieberman and John Tucker Jr., Preston Tucker’s grandson.

“The Car Detective” is the theme for Demo Day from 11 a.m. until 2 p.m. January 26 at the Simeone Foundation Automotive Museum in Philadelphia. “What does it take to be a real car detective?” the museum asks. To help provide answers, featured cars for the day are the Stutz Black Hawk Challenger, a Duesenberg Grand Prix racer, a Mercedes-Benz 300SL and a BMW 328.

As part of its 25th anniversary celebration, the Petersen Automotive Museum in Los Angeles will offer free admission through February 2 to LA United School District students in grades K-12 and will offer special STEAM-base programs on science, arts, match, etc.).

The Studebaker National Museum in South Bend, Indiana, is extending the run of its “Ten Cars That Changed the World” exhibit through February 3.

“From Gas Station to Space Station: How NASA Conquered Low-Earth Orbit” is the title for a special exhibit running through July 30, 2019, at the National Corvette Museum in Bowling Green, Kentucky, where the museum and NASA celebrate the 50th anniversary of the moon landing.

The California Automobile Museum in Sacramento hosts “Tinker Time” beginning at 11 a.m. the first Saturday of each month, including February 2. The theme for 2019 is car design and it’s a “hands dirty” learning experience using modeling clay, “just like the professionals do,” the museum notes.

“The Goodwood Story” will be presented February 2, 2019, as part of the speaker series at the Blackhawk Museum in Danville, California, where Harry Sherrard, who was involved in the revival of racing at the Goodwood Estate, will discuss Goodwood’s history, from the founding of the Dukedom of Richmond in 1672 by King Charles II to the estate’s history with the Royal Air Ford and the current Goodwood Revival and Festival of Speed.

The Auburn Cord Duesenberg Museum in northeast Indiana hosts The Bootleggers Ball from 6 p.m. to 9 p.m. on February 9.

A 1968 Fiat 500 F will be featured as the Museum of Modern Art in New York City opens its “The Value of Good Design” exhibit which runs from February 10 until May 27.

“Pint with the Past” is a beer tasting fundraiser February 16 at the Gilmore Car Museum in Hickory Corners, Michigan.

In conjunction with the February 16-24 school holiday in England, the National Motor Museum at Beaulieu will host a Hands-on Half-Term event featuring its Chitty Chitty Bang Bang 50 Years exhibit with students invited to make like Caractacus Potts and create their own balloon cars and then see how fast they’ll go.

During the same dates in February, the British Motor Museum at Beaulieu will offers special children’s programs on jet-powered cars daily from 11 a.m. until 2:30 p.m., with children building third own “jet powered” (O.K., it’s the air emerging from a balloon) cars.

February 23 is Trivia Night at the Studebaker National Museum in South Bend, Indiana, where the first of 100 questions will be asked at 7 p.m. Teams are asked to register in advance by calling the museum.

The Seal Cove Auto Museum in Maine hots its Brass Club speakeasy gala on March 9 from 7 p.m. until 9 p.m.

The Auburn Cord Duesenberg Museum, in conjunction with the Eckhart Public Library of Auburn, Indiana, will host the Bootlegger’s Ball on February 9 from 6 p.m. to 9 p.m.

The Miles Through Time Automotive Museum in Toccoa, in Georgia, stages a car club cruise-in on March 23.

“RADwood: Cleveland Goes Rad” is the title for an exhibit/experience opening January 11, 2019 and running through March 24 at the Crawford Auto-Aviation Museum in Cleveland. Staged in partnership with RADwood car shows, the exhibit will celebrate 1980s and ‘90s car culture and will showcase vehicles, clothing, music “and everything in between.”

The NASCAR Hall of Fame museum in Charlotte, North Carolina, opens a special “RCR 50: Only in America” exhibit featuring 50 years of Richard Childress Racing in May, 2019.