As Mecum’s 13th annual Kissimmee sale of collector cars and Road Art draws to its conclusion Sunday at the Osceola Heritage Park not far from Disney World, I’ve been reviewing the photos I took while there and found a few that I still think might still be worthy of sharing.

For example, just about the time you think you’ve seen pretty much everything, you wander into a vehicle like this 2008 Tramontana GT (above), which looks like a tandem-seat Indy car. Turns out this is the first of eight produced in Barcelona, Spain, and carries a turbocharged 5.5-liter Mercedes-based V12 engine rated at 888 horsepower, does 0-60 mph in less than 3 seconds and supposedly can reach a top speed of 217 mph. For stopping, there are carbon-ceramic disc brakes. There’s also a removable glass top.

If 217 is a little fast for your taste, or level of driving skill, there was another vehicle on the docket I’d never seen before. It was a Jolly-style 2012 Fiat 500 (above), the reborn Fiat 500 that for some reason Thunderbirds Etc., of Fort Worth, Texas, decided to make into a soft-top, fringe-roofed modern version of the famed Jolly cars designed for carrying on yachts and using on beaches or visits to port.

Here are a couple more vehicles I’d never seen before. One is a Guston Army Tank pedal car (above left). The other is an aero-inspired 1947 Salsbury Model 85 Imperial (above right), a motor scooter, with a side car from the same factory. According to the International Salsbury Restorers Society, Foster Salsbury, from California, produced the world’s first commercially viable motor scooters in 1936. 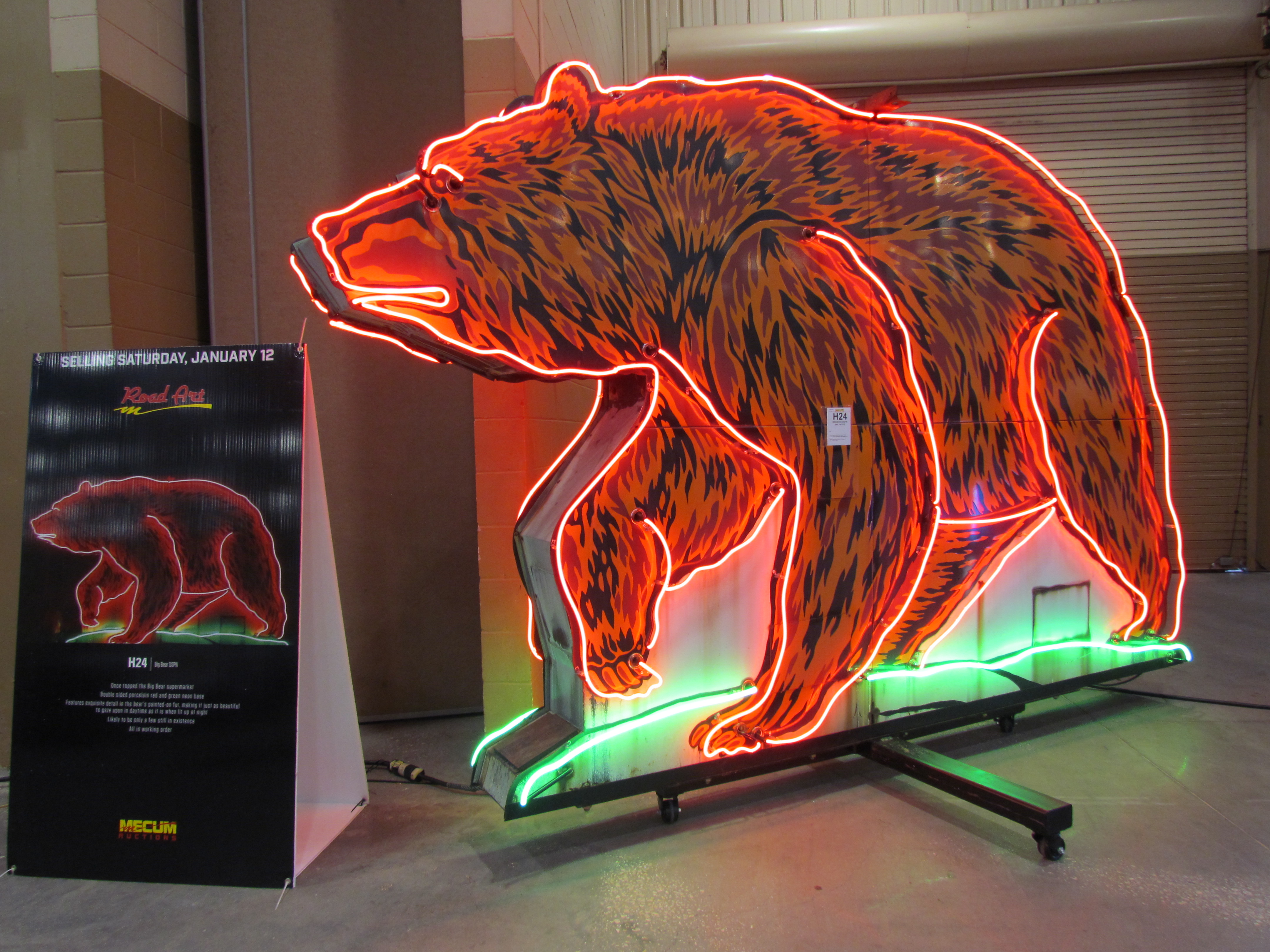 The Guston Army Tank pedal car was part of the huge Road Art docket for the Kissimmee sale. Also on that docket was the grizzly-sized Big Bear supermarket neon sign (above) that once stood atop a grocery. The sign is 12 feet long and 8 feet tall. 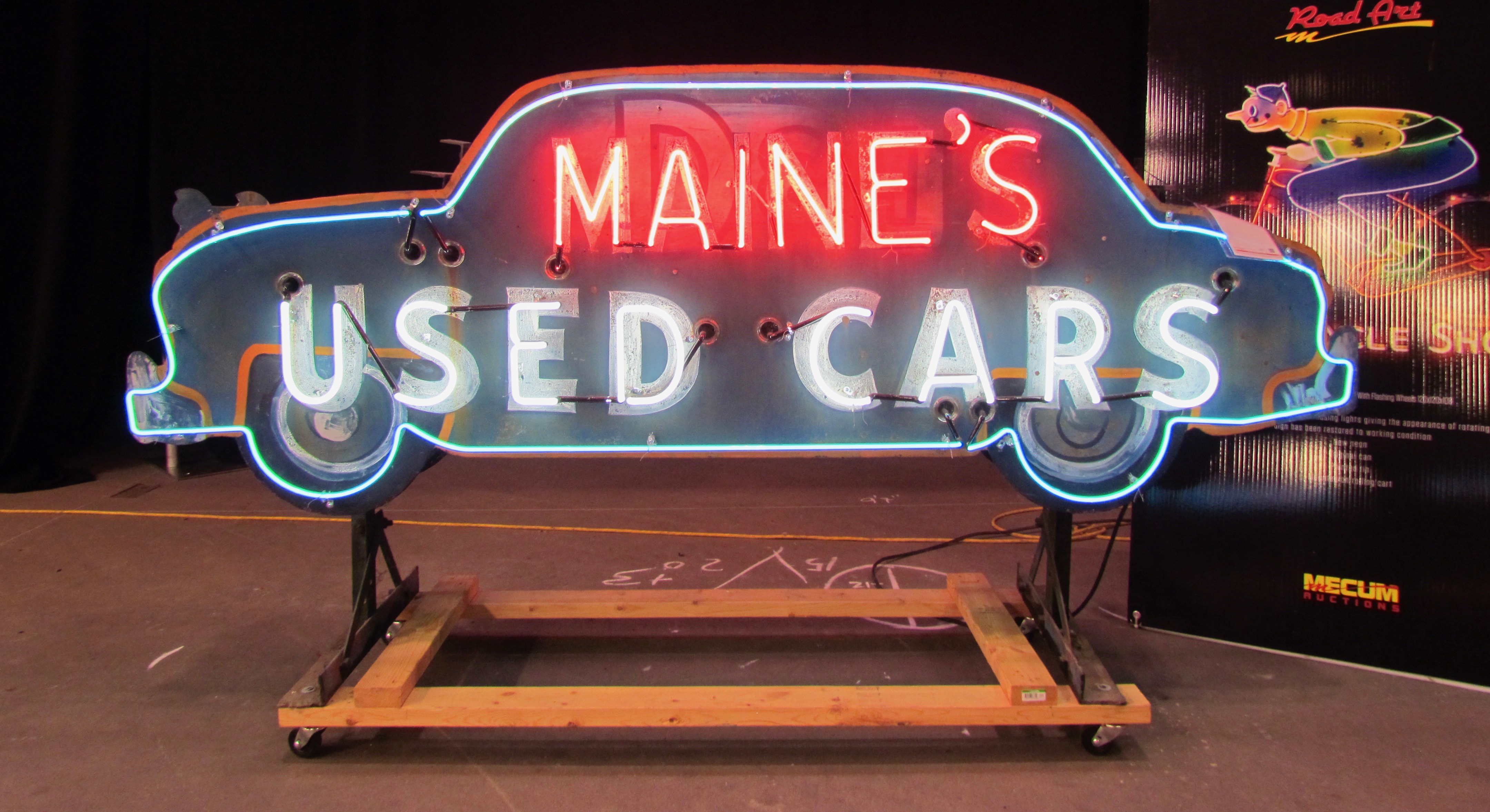 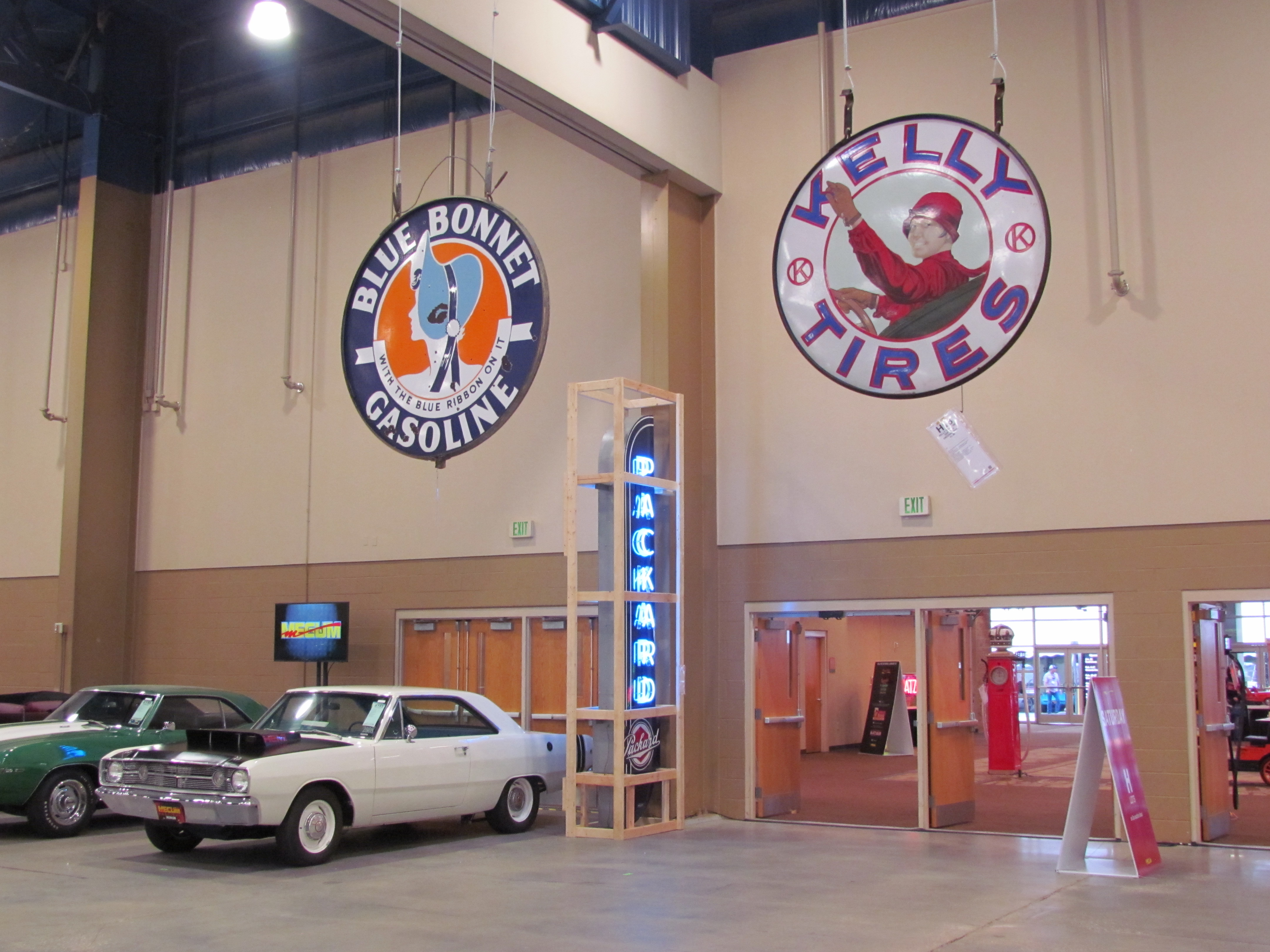 Though not neon, the Road Art sale included these big porcelain signs (above). I was drawn to the Blue Bonnet Gasoline one, but was informed by one of the Mecum Road Art experts that the Kelly Tires sign was the much more coveted — and likely more expensive — of this pair.

I apologize for my political incorrectness, but I am very much attracted to the hood mascots on vintage Pontiacs, loved the Pontiac Chief neon and was drawn back a few times to see the Mohawk Tires clock (all above).

I also like the artistic logo of the Stay-Ready automatic transmission fluid can (left), even though I have no idea why a woman would be riding on the back of a gigantic and flying mallard duck.

Two more pieces of Road Art I need to share. One is one of Richard Petty’s famed hats (above left). The other, which I couldn’t really photograph without too much glare, was a large frame with a photograph and a piece of crumpled bodywork from Dan Garlits’ Swamp Rat II, “The Saltliner” (above right). In 1988, Garlits joined the 200 mph Club at Bonneville in the vehicle, reaching 217.947 mph. Two years later, he went back — and crashed.

Ah, the good old days when you could tell a vehicle simply by viewing its tail fins, or even by seeing its tail lamps at night.

Almost done, but I have to include the rear decklid of this Studebaker Champion; the gorgeous Packard hood mascot; a shot of John Kraman, who performs with his long-time rock band when he’s not part of the commentary team for NBC Sports Network; and this portable, steam-powered electric generating unit from The Geisner Manufacturing Co., of Waynesboro, Pennsylvania, that an ice cream vendor at the auction was using in the ice cream-making process (all above). 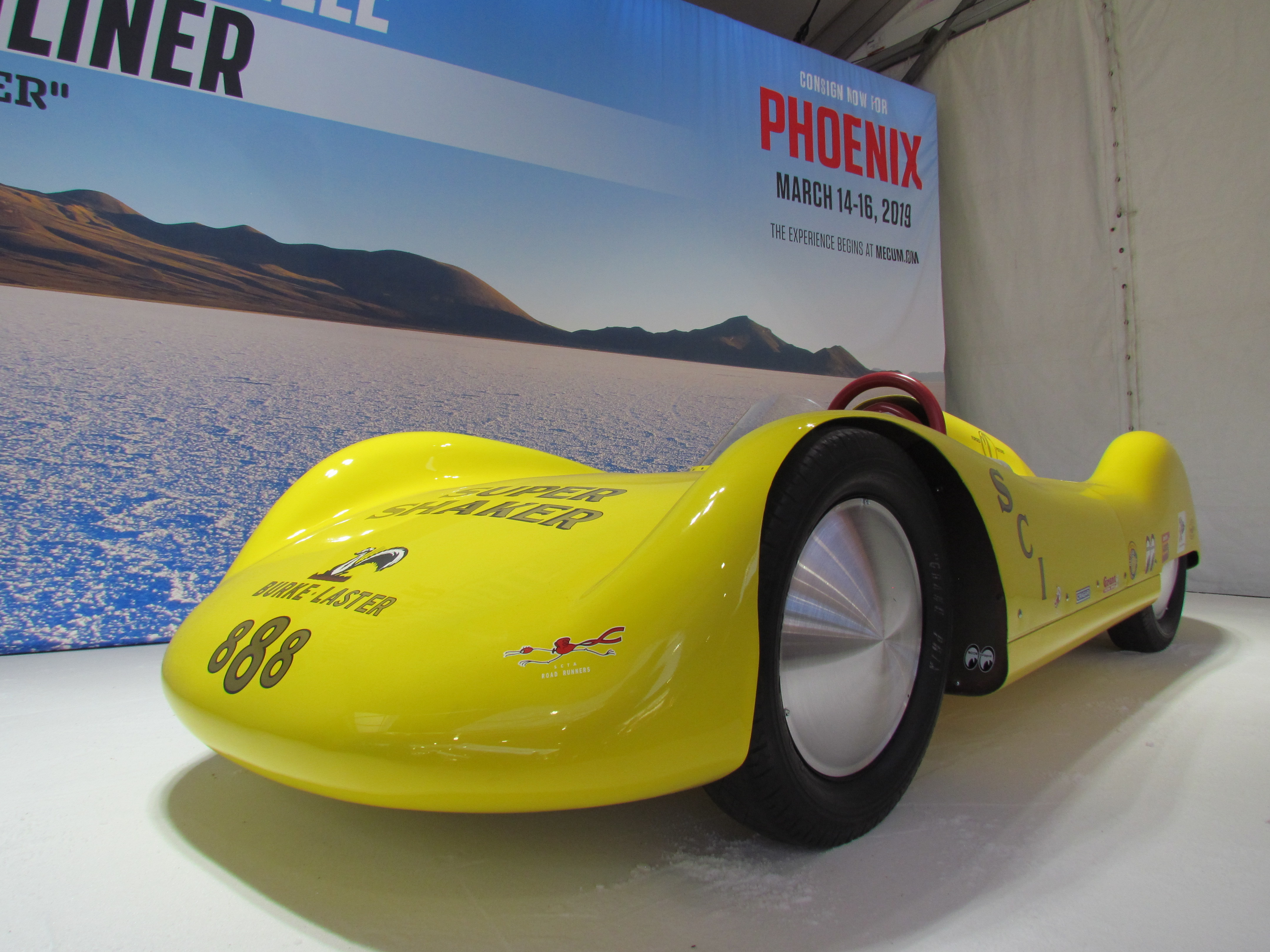 This final photo is of a car, the 1959 Bonneville Streamliner “Super Shaker” (above), which will be on the docket for Mecum’s inaugural collector car auction in the Phoenix area, scheduled for March 14-16 at State Farm Stadium, site for Final Four and Super Bowl games, in Glendale.