Jaguar certainly has a storied history. Multiple victories at Le Mans. Praise of the XK sports cars, for the C- and D-types, and even for sedans such as the Mk 2. The company certainly lived up to its “Grace. Space. Pace.” tagline.

However, there was a time, in the 1970s, when Jaguars were thought to be among the most unreliable in the world.  Jaguar Motors had been acquired by British Leyland and the first thing that happened was a decline in quality.

Over the decade, things got worse as British Leyland penny pinched the cars and the labor force that built them, causing every kind of reliability and fit-and-finish issue you could imagine.

Just ask an original owner of a Series 2 XJ6 about problems and get ready to fill a notebook with their answers.

Something had to be done and happily that something involved the hiring of John Egan to run the company. Egan got British Leyland to approve an £80 million development budget for a new sedan to replace the aging XJ6. This was the most money Jaguar had ever spent on a new car development program.

The car, known as the XJ40, also was the last car that Jaguar founder William Lyons would have a hand in creating.

The new car required retooling and modernization of the Jaguar assembly line. An additional assist came from the most unlikely of places, Detroit, as Ford would purchase the Jaguar brand and spend millions of dollars to improve quality, tooling and, with Egan’s strong leadership, basically save the Jaguar brand. In the process, the XJ40, or XJ6 as it is known in the U.S., became the best product the company had built in years.

These cars were head-to-head competitors with the BMW E34 5 Series cars and the design, while not loved when new, has aged quite well. 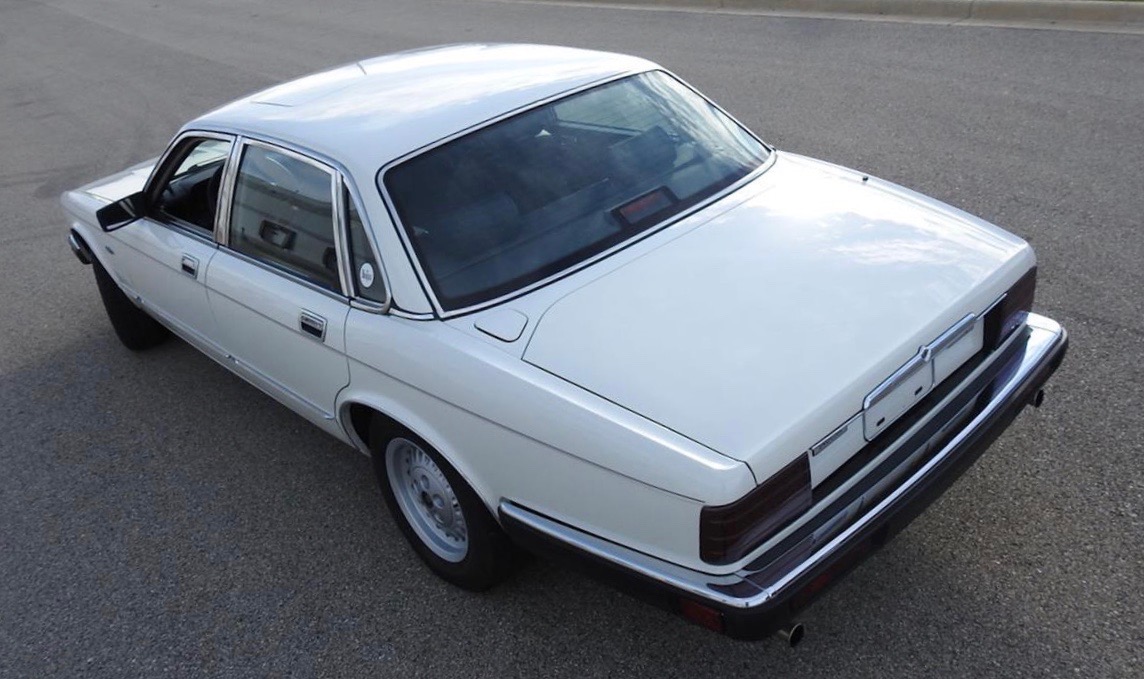 The Pick of the Day is from the best era of the XJ40. It’s a 1990 Jaguar XJ6 Sovereign located in Kenosha, Wisconsin.

According to the seller advertising on ClassicCars.com, a collector car specialist dealership in Milwaukee, Wisconsin, this one-owner car has been driven only 33,000 miles. It is completely original and seemingly flawless.

Finished in its original White Onyx paint with a contrasting Sapphire Blue Connolly leather interior, the car is stunning and appears as nice as it did when new.

Sovereign was higher spec than a standard XJ6 and received inlaid walnut wood trim on door caps and nice red and blue pinstriping on the exterior. The Sovereign also received a self-leveling rear suspension.

These cars were originally slated to receive a Rover V8 but happily that was vetoed and the XJ40 is powered by the Jaguar AJ6 5.o-liter DOHC inline 6 rated at 240 horsepower and 289 pounds-feet of torque mated. The engine is mated to a 4-speed automatic transmission with the signature J Gate shifter that was introduced with the XJ40.

The asking price of this Jaguar time capsule is only $12,995.

These cars are starting to be on collectors’ radars more and more. Rob Sass, the editor of Porsche Panorama magazine, and I have been discussing these cars on a monthly basis and I would not be surprised if both of us end up with one sooner than later.