This custom 1954 Chevrolet Corvette convertible known as the “Transitions” Corvette — the masterpiece of car-building guru Larry Griffey of Hot Rod Restorations — is destined to be one of the star cars at the 2019 Barrett-Jackson Scottsdale Auction.

No one told the future we were rushing its way more convincingly than GM’s chief designer Harley Earl. His styling team allowed us to peer into that future, thanks to an assortment of their jet-age influenced concept cars displayed at those fabulous GM automotive exhibits called the Motorama.

His indomitable imagination gave us the first Corvette at this event in 1953. Granted,Earl was responsible for many fantastic automotive designs, but his original Corvette is the one that’s still standing the test of time.

The 1953 model brought the house down when it was first displayed at that year’s proceedings. At the very next Motorama, Earl released more two-seaters sharing essentially the same underpinnings as the Corvette. That included the now priceless 1954 Pontiac Bonneville Special. It was a period of time in the automotive industry that simply overflowed with historical significance. 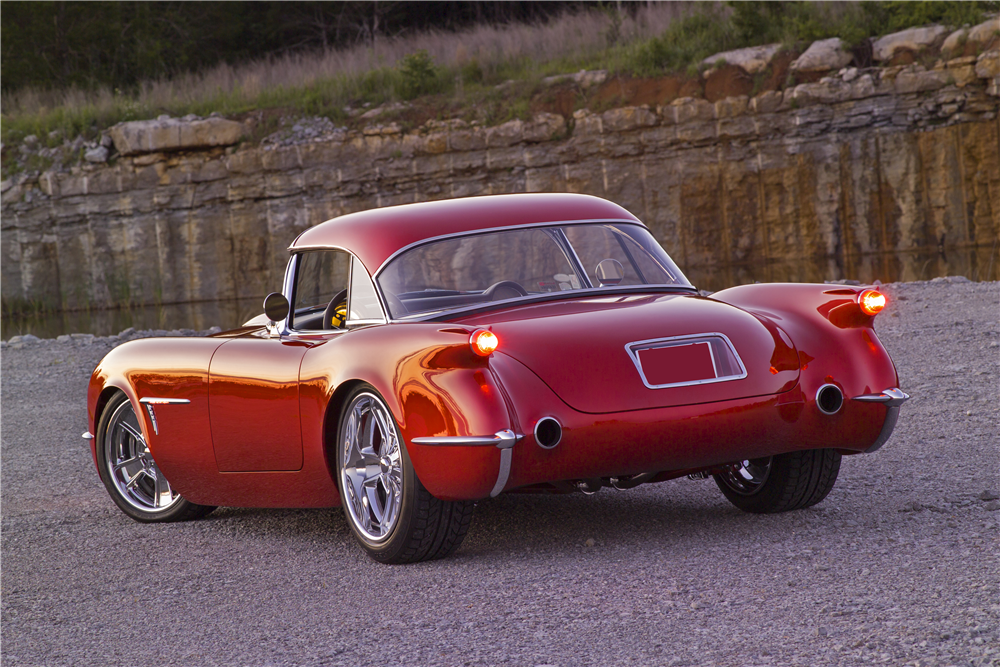 Now, fast-forward to the present future. The idea here was to build an early Corvette, emphasize its beautiful and period-correct design, then supplement it with today’s, even tomorrow’s, state-of-the-science technology. Think of it as a blending of several generations of the Corvette spirit.

The 1954 rendition coming to the 2019 Barrett-Jackson Scottsdale auction with no reserve is called the Transitions Corvette and was created to make the perfect transition from what the future looked like in the ʼ50s to the future we’re living in now. The artist behind this modern masterpiece is car-building guru Larry Griffey of Hot Rod Restorations in Knoxville, Tennessee. His build was inspired by those same early two-seater dream cars from those pioneering Motorama experiences. 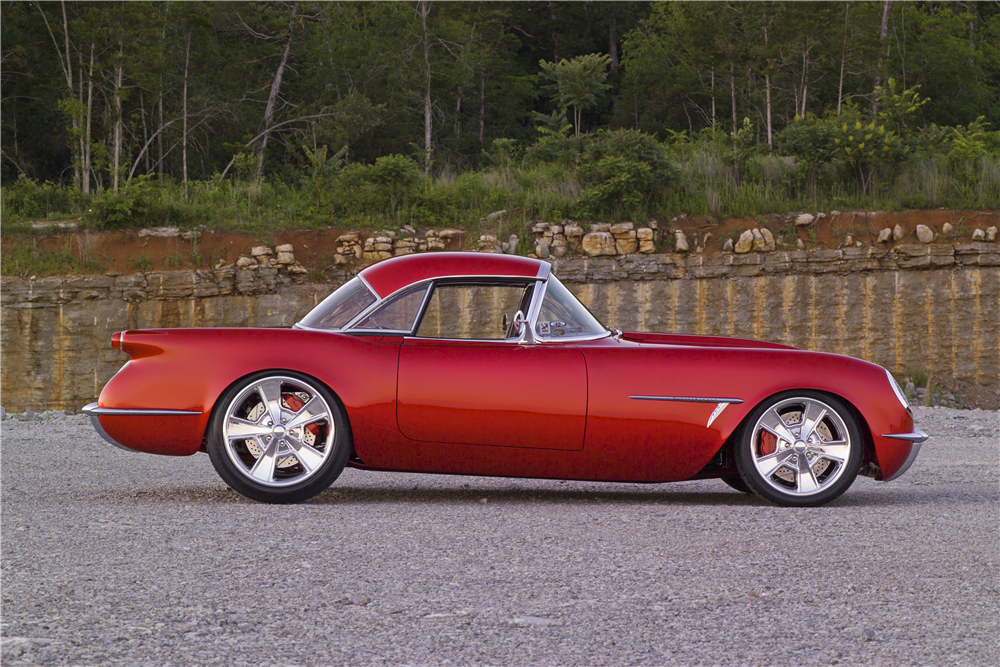 Starting with a special, double-tube chassis engineered by Jamison Custom Corvette, Inc., the Transitions Corvette was then given a complete C4 suspension package with custom-made front and rear anti-sway bars, making this 1954 model a much more precise handling machine than any stock C4 Corvette could hope to be.

Every square inch of this car’s body has been reshaped, reangled or remolded. Its new body is wider, with a tapered body drop that was crafted into the design. A cowl-induction hood was handcrafted to provide clearance for the supercharged engine. The rear wheel wells have been removed and reimagined.

The cowl was also modified to accept a ’56 Corvette windshield. The standard cowl vent no longer exists. The rear hatch was recreated to accept a ’56 removable hardtop. The doors were split and widened to accommodate power windows. Not in plain sight is a steel structure that encompasses occupants for additional safety while providing increased chassis rigidity.

The interior of the Transitions project looks like an expensive leather glove just waiting to be put on. The color is called Deep Earth. The classic double-hump dash remains, but everything about it is new and softer than the original. Dashboard gauges are from Classic Instruments and offer precision along with vintage looks that fit the build perfectly. This all-weather interceptor is equipped with Vintage Air and NuRelics power windows. 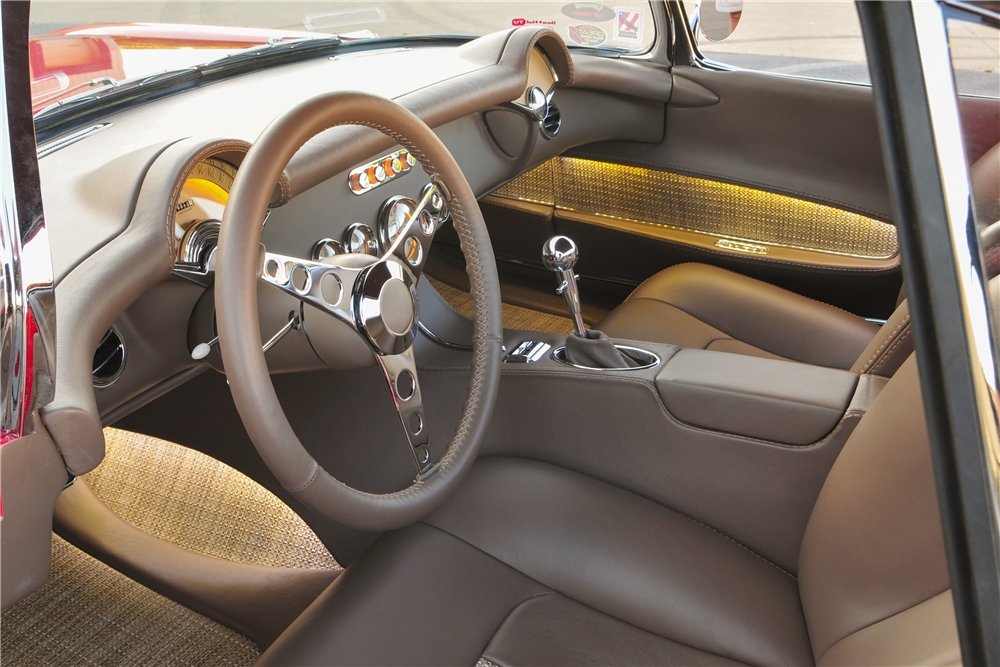 At the heart of the matter is a modern LS1 5.7-liter Chevrolet Corvette engine. It was treated to some specialized headwork, along with a new camshaft ground to specs that will enhance the performance of its Edelbrock Supercharger package.

This Corvette is currently operating with a GM 4L60E overdrive automatic transmission. But there’s more here than meets the eye. This driver’s machine was engineered so a swap to a 6-speed manual transmission could be performed much easier than you might think. The clutch pedal bracketry is already installed; the trans cradle is ready, willing and able to oblige. A clutch pedal is only a phone call away.

Notice the shifter lever operating the automatic. The fact that it looks like a classic Muncie 4-speed unit is no coincidence. It was produced by Lokar Performance Products and chosen by the builders because they determined no other shifter could possibly be more appropriate for this very car, whether it was shifting an automatic or a manual transmission. 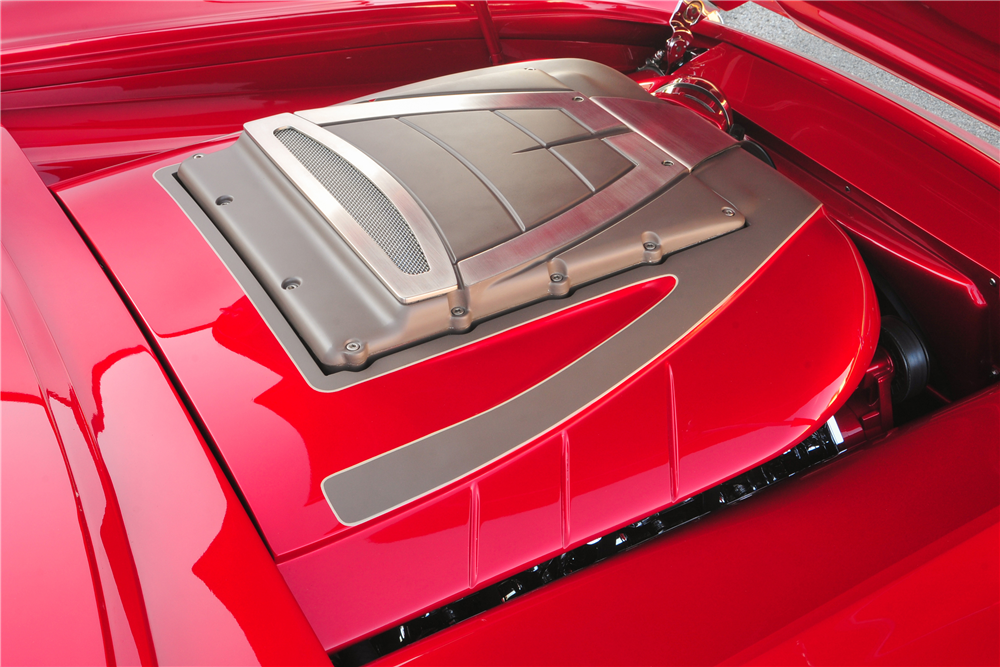 Baer Brakes with drilled 14-inch rotors and six-piston calipers on each corner generate all the negative Gs needed to keep this beast honest, legal and safe. Billet Specialties wheels in a classic five-spoke pattern look awesome in their own right and showcase that impressive brake system at the same time.

The Transitions Corvette may prove to be the last car Larry Griffey himself builds, since he’s talking about retirement (even though his company will remain busy and active). If that’s the case, he is bowing out with one of the finest custom cars of all time and punctuating an already impressive legacy with a final seal of perfection. 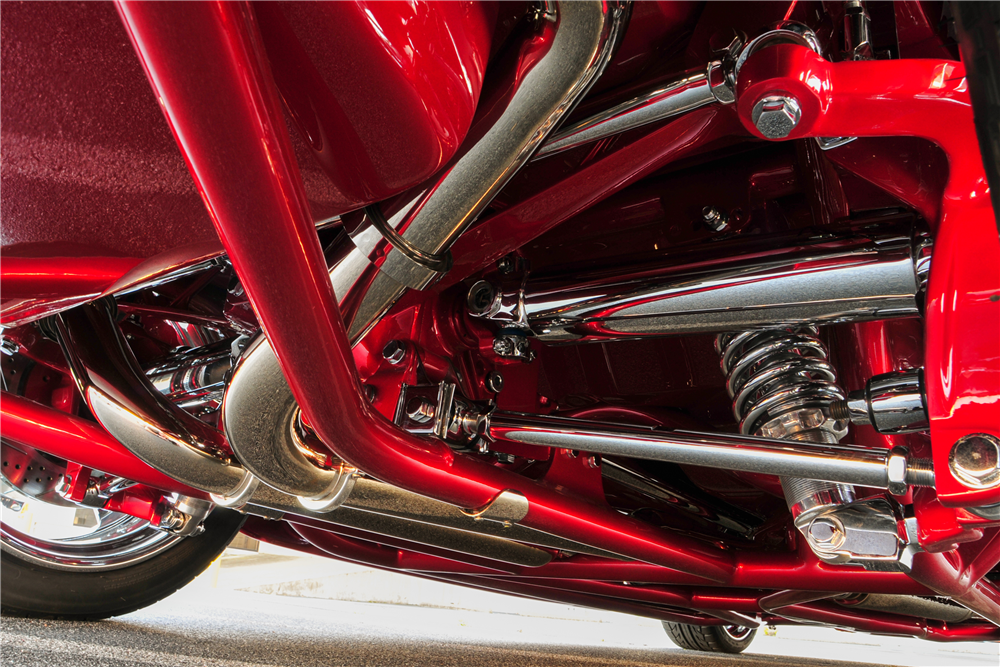 After a six-year build process, this Corvette debuted at the 2017 Detroit Autorama extravaganza, where it was selected as one of the “Ridler Great 8” finalists. Since then it has gone on to win numerous other events for its workmanship and imagination and has been on the cover of a variety of enthusiast magazines.

This very creation was on display in the Barrett-Jackson booth at the 2018 SEMA Show. It represents the dreams of the man who initially designed it, and the ambition of another who gave it a new life and prepared it for the next phase of its trip to the future. If you act decisively, you can be the one who transitions this Corvette from here to there, and way beyond.