Chrysler’s 1970 and ʼ71 E-body Barracudas represented a fresh new look for the world of pony cars, instantly making GM and Ford counterparts look like yesterday’s heroes. The Barracuda’s smooth morphing of flat and curved styling surfaces created a car that’s still as beautiful and advanced-looking now as it was then. That makes it the perfect object to be taken into the next dimension.

This fabulous restomod, known as “Striker,” was created by Jesse’s Auto Body in Dewey, Oklahoma. Jesse Matlock, along with his build team, left no stone unturned in the re-creation of this smooth-as-silk 1971 Plymouth Barracuda. The total effort required over 9,000 hours to complete, because every part of this E-body has been modified and massaged, with Jesse’s experienced eye as the guiding light.

This coupe was completely disassembled and taken down to bare metal in preparation for its rebirth. All sheet metal, except the roof and quarter-panels, had to be fabricated from scratch. A detailed artist’s rendering of the car Matlock had in mind became the roadmap to their vision.

An extraordinary amount of metalwork took place to make beautiful lines even more so in creating this Barracuda for the ages. Emphasizing those lines are rocker panels lengthened two inches and blended smoothly into the frame rails. Drip rails, door handles, locks and side markers were shaved off the sides of the fuselage. Both bumpers were reengineered to be tucked-in rather than hang out, then completely smoothed and welded to the body. 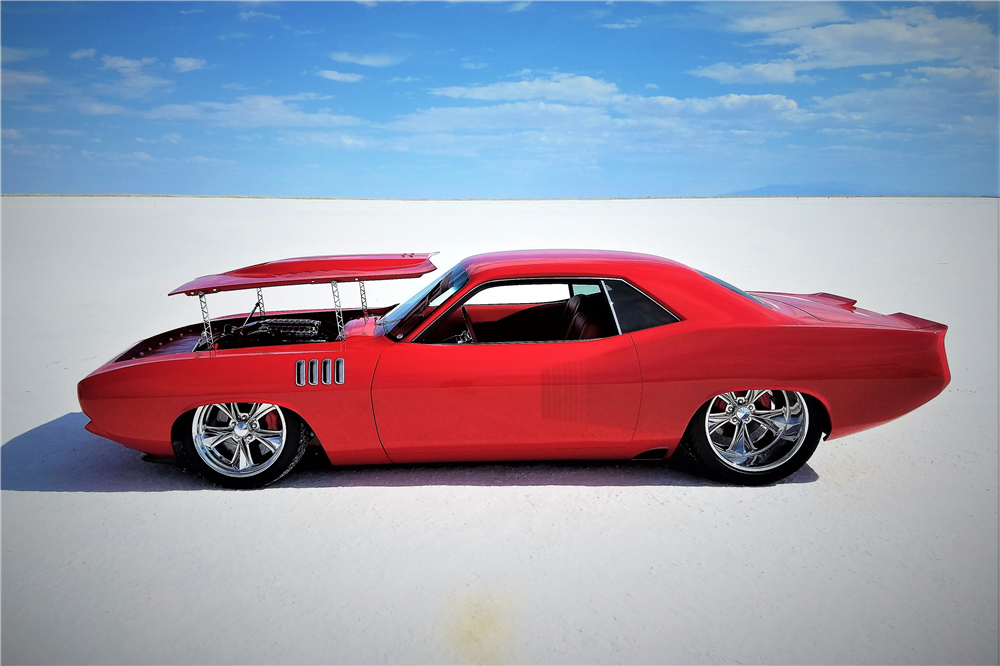 Under the classic 1971 grille sits a custom-designed air splitter and spoiler. The car’s profile has been altered with the front fenders extended downward by two inches, creating a sleeker, more aggressive look. Flush-mounted front and rear glass add even more smoothness to this trendsetting Mopar.

Since you can’t flirt with the future without having the latest technology on your side, Matlock had master steel sculptor Patrick Hagerman create a custom 2×4 dual-rail chassis that would be the basis for Art Morrison suspension components. These included a special crossmember, an anti-sway bar and tubular control arms up front, and a triangulated 4-link rear setup supporting a classic Mopar 8-3/4 narrowed differential utilizing Strange axles, Sure-Grip and a 3.91 gear set.

A RideTech air-ride system featuring Shockwaves on all corners allows 1 to 7 inches of ground clearance, with a normal ride height of 4 inches. Controls are at the driver’s fingertips. This modern HEMI Barracuda rolls on custom wheels measuring 18x7s in the front and 20x15s on the business end. Mickey Thompson tires all around have their way with the pavement. You can confirm its perfect stance with a single glance. 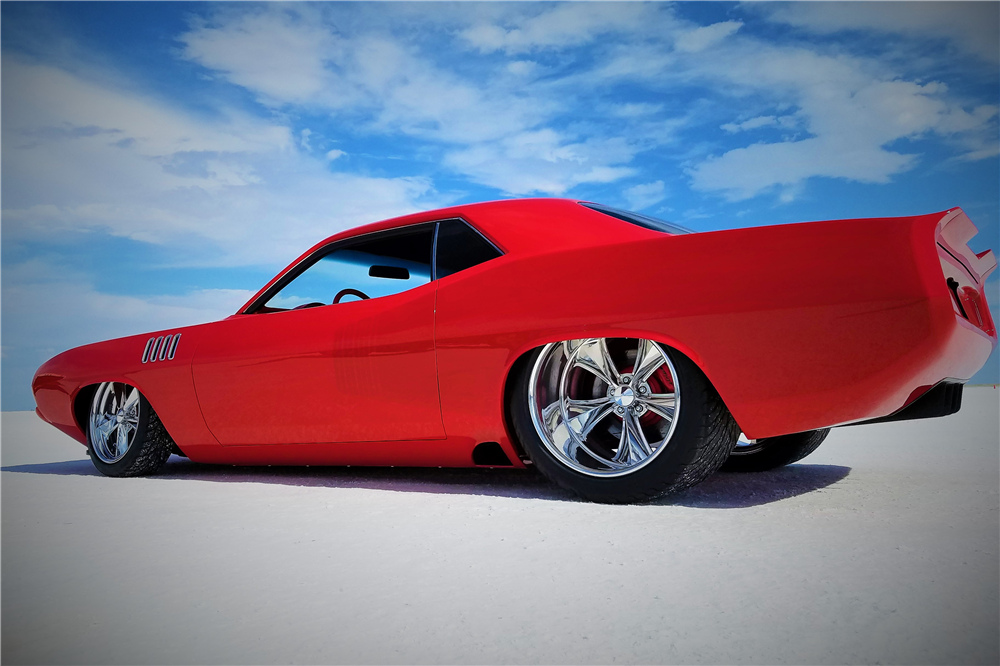 Custom Epic Lighting headlights up front and Digi-Tails rear lighting make sure this machine can be clearly seen by one and all, whether it’s coming or going.

Speaking of visibility, a modern 426cid fuel-injected modern HEMI from a 2009 Challenger SRT now sporting a supercharger powers this machine, giving it the performance and heritage of a true Chrysler blue-blood, even though this wicked machine is wearing striking red paint. The completely smoothed engine bay makes the perfect setting for this jewel-like horsepower factory. A Chrysler Nag 1 5-speed automatic transmission from the same donor Challenger spreads the fun to the rear wheels of this Barracuda with computerized precision.

A full set of Challenger-sourced Brembo disc brakes are more than capable of reeling in this high-powered Barracuda if ever the need surfaces.

Behind the controls is the best place to be to appreciate all this amazing Barracuda has to offer. The car’s interior is fresh and futuristic in every way and function. A custom dash and instrument pod filled with a complete set of VDO gauges connects the driver to each and every one of those functions, the same way a fighter plane does for its pilot. A Kicker audio system has been seamlessly incorporated into this Barracuda. Leather and vinyl highlight the interior and make for an inviting and comfortable cockpit.

A custom blend of red paint created the hue you see here. If you look closely, you’ll even see the ghosted HEMI billboard graphics on both rear quarter-panels. The Striker Barracuda is a multi-show winner, with a string of awards a mile long to prove it.

If the smooth, timeless look of this Barracuda struck your fancy already, now’s the time to take ownership of this magnificent machine. Just remember, this fish is not just the catch of the day, it’s the catch of a lifetime.