“From Gas Station to Space Station: How NASA Conquered Low-Earth Orbit” is the title for a special exhibit running January 14-July 30, 2019, at the National Corvette Museum in Bowling Green, Kentucky, where the museum and NASA will celebrate the 50th anniversary of the moon landing.

“With Mars being the next giant leap for mankind, conquering low earth orbit is key to making that happen,” the museum said in its exhibit announcement. “Through the experiments and lessons learned on our journeys to the moon, along with all we’ve discovered from the Space Shuttle program, Skylab, and the International Space Station, we are already preparing for that next epic adventure. This exhibit explores the ongoing quest for interplanetary travel.”

“This exhibit shows where we’ve gone since going to the moon and tells the story of where that transformative moment in history has led us,” museum curator Derek Moore is quoted in the news release. “We’ll be looking at some stories about how one becomes an astronaut and look into how we landed on the moon, and how that is leading us into the future.”

The museum also said it will spotlight “the fascinating connection between the space program and America’s sports car.”

“It’s no surprise to anyone that those people who push the envelope in performance aircraft and rockets would want to drive high-performance cars when Earth-bound. For many, the natural choice was Corvette,” the museum said. “Alan Shepard started the trend when he drove a 1957 Corvette to the astronaut training base. Later, when he became the first American to travel in space on May 5, 1961, GM President Ed Cole gave him a new Corvette to honor his accomplishment.

“Many believe that GM continued to hand out Corvettes to astronauts, but this was not the case. It was former Indy 500 winner, turned Florida Cadillac/Corvette dealer, Jim Rathmann, who perpetuated and cultivated this association by offering a lease agreement for $1 to astronauts. Many of them from the Mercury Program thru Apollo 12 took Jim up on his offer, forever forging a connection between Corvette and the space program.

In addition to the Rathmann connection, “We also plan to tell the story of Betty Skelton, who had a fascinating role when it comes to Corvette and those early days of the space program,” Moore said.

“Most Corvette fans already know that she liked to push the limits and that she was a real pioneer in challenging so many male-dominated roles. She did it by doing, setting land speed records, paving the way for women in auto racing, aviation and even astronautics. In fact, she became the first woman to go through NASA’s rigorous physical and psychological tests. These were the same tests used to qualify the Mercury 7 Astronauts.

“She did it to prove that it could be done by a woman. On the cover of LOOK magazine, there she was in a pressure suit and a helmet, next to the headline ‘Should a Girl be First in Space?’ Who knows how many women that Betty has inspired by her example? We hope this exhibit will encourage everyone in the school groups that come through the Museum, to go after their dreams too, and literally reach for the stars.”

Many car museums send appeals for year-end financial contributions. A couple of the more creative are worth sharing in this space.

The Gilmore Car Museum in Hickory Corners, Michigan, created a checkerboard-style “by the numbers” graphic that pointed out that in 2017:

•  It hosted 6,718 students with free educational programs, and that 22 students learned hands-on in the museum’s vehicle restoration shop;

•  Benefited from 91 volunteers, who contributed 7,187 hours to the museum;

Also doing a clever graphic — “A Road Map to Giving” — was the LeMay – America’s Car Museum in Tacoma, Washington: 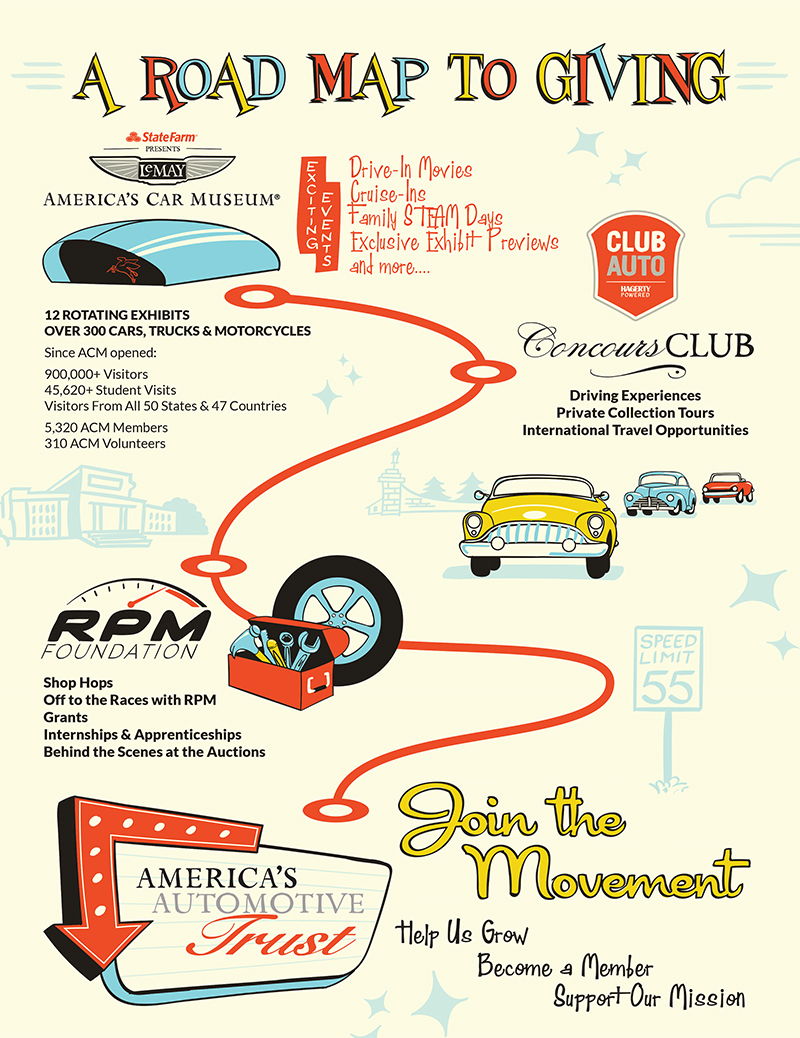 More straightforward is the appeal from the Seal Cove Auto Museum in Maine, which notes that in addition to the usual sorts of programs, donations to the museum will go toward establishing a driving track so it can provide visitors with rides in antique vehicles without having to venture out onto busy public roadways.

The California Automobile Museum in Sacramento is raising money to enhance its climate-control ventilation system to “dramatically improve the visitor experience.”

Crawford goes rad… wood, that is

“RADwood: Cleveland Goes Rad” is the title for an exhibit/experience opening January 11, 2019 and running through March 24 at the Crawford Auto-Aviation Museum in Cleveland.

Staged in partnership with RADwood car shows, the exhibit will celebrate 1980s and ‘90s car culture and will showcase vehicles, clothing, music “and everything in between.”

Grate began working at the museum while studying at Indiana University-Purdue University Fort Wayne and then received his master of arts in museum studies (with merit) from Newcastle University in England.

A self-proclaimed history buff, “I have wanted to do my part to faithfully preserve, interpret, and present history and have found an excellent home here at the Auburn Cord Duesenberg Automobile Museum,” Grate is quoted in the museum’s news release.

The Arizona Open Wheel Racing Museum has closed, is selling off several race cars, 3,000 photographs and numerous fixtures, and is in the process of returning to their owners vehicles and items loaned for display, the facility announced on its Facebook page. The late Steve Stroud opened the museum in 2011 to preserve Arizona’s unique open-wheel racing history.

Ernie’s 1930 GMC Taxi from It’s a Wonderful Life, the beloved 1946 holiday movie, remains on display at the AACA Museum in Hershey, Pennsylvania, through February 2019.

Because of the popularity of the exhibit, Rosso Fioravanti, featuring vehicles designed by Leonardo Fioravanti, creator of more Ferraris than any other designer, has been extended until January 6, 2019, at the Museo Nazionale del’Automobile in Torino, Italy.

December 28 is the final day of special holiday-season guided tours and a tech talk at the Simeone Foundation Automotive Museum in Philadelphia.

The Museo Nazionale del’Automobile in Torino, Italy, starts a third Saturday of the month “Asphalt and Star Dust” tour December 29 featuring cars that have appeared on the big screen.

The Gilmore Car Museum in Hickory Corners, Michigan, hosts “Ring in the New Year” starting at 9 p.m. on December 31.

A special exhibit celebrating the 50th birthday of former Ferrari racing star Michael Schumacher opens on that date, January 3, 2019, at the Ferrari Museum in Italy. Staged in collaboration with the Keep Fighting Foundation, the exhibit will be staged in several rooms of the museum and will look at his racing career and his involvement in developing Ferrari cars for the roads as well.

The special “Louis to Le Mans” exhibit at the National Corvette Museum in Bowling Green, Kentucky, closes on January 4, 2019. It opens its “From Gas Station to Space Station: How NASA Conquered Low-Earth Orbit” exhibit in that same space on January 14.

A special cruise-in and tribute are planned for January 5-6, 2019, as the Petersen Automotive Museum in Los Angeles honors the late Carroll Shelby’s birthday. The tribute begins at 6:30 p.m. on January 5 with the cruise-in starting the following day at 9 a.m.

Pioneers and adventurers is the theme of the spring lecture series at the National Motor Museum at Beaulieu, England, where the program begins January 12, 2019, with a showing of Spitfire, a cinematic account of the British fighter aircraft with British Film Company founder Steve Milne and co-directors David Fairhead and Anthony Palmer.

On January 12, the British Motor Museum hosts the Historic Rally Car Register Open Day and a celebration of the 60th anniversary of the British Motor Corp. Mini. The special event runs from 9:30 a.m. until 4 p.m.

Another “Legends of Racing History” event is scheduled January 17, 2019, at the Automobile Driving Museum in El Segundo, California, where a reception from 11 a.m. until 1 pm. will celebrate the display of the 1954 Sutton Jaguar.

“The Goodwood Story” will be presented February 2, 2019, as part of the speaker series at the Blackhawk Museum in Danville, California, where Harry Sherrard, who was involved in the revival of racing at the Goodwood Estate, will discuss Goodwood’s history, from the founding of the Dukedom of Richmond in 1672 by King Charles II to the estate’s history with the Royal Air Ford and the current Goodwood Revival and Festival of Speed.

“Pint with the Past” is a beer tasting fundraiser February 16 at the Gilmore Car Museum in Hickory Corners, Michigan.

In conjunction with the February 16-24 school holiday in England, the National Motor Museum at Beaulieu will host a Hands-on Half-Term event featuring its Chitty Chitty Bang Bang 50 Years exhibit with students invited to make like Caractacus Potts and create their own balloon cars and then see how fast they’ll go.

The NASCAR Hall of Fame museum in Charlotte, North Carolina, opens a special “RCR 50: Only in America” exhibit featuring 50 years of Richard Childress Racing in May, 2019.

“The Car. The Future. Me” is the title of an exhibit scheduled to pen July 13 at the British Motor Museum in Gaydon, UK, to explore “futuristic car design and (to) challenge your idea of how we will interact with the cars for the future,” the museum said.