As years go, 1987 was a big one. Aretha Franklin became the first woman inducted into the Rock and Roll Hall of Fame, Chrysler acquired American Motors, the Dow Jones Industrial Average closed above 2,000 for the first time, The Simpsons debuted, Michael Douglas starred in two of the year’s biggest films – Wall Street and Fatal Attraction – and, during a visit to Berlin, President Ronald Reagan urged Soviet Premier Mikhail Gorbachev to tear down the Berlin Wall.

That same year, a pair of Buicks with sequential serial numbers arrived at Bill Brown Motors in Shattuck, Oklahoma, each carrying a sticker price of $17,643. From there, they would sit in storage for more than 30 years, tucked away by Brown’s son after his father passed away.

One of the Buicks has less than 900 original miles and the other has less than 600 miles. As barn finds go, these two cars are nothing short of remarkable, a truly unique pair.

Known by the nickname “The Twinz,” these identical Buicks will be sold at the Barrett-Jackson Scottsdale Auction, January 12-20 at WestWorld of Scottsdale. The pair will be sold with no reserve, ensuring they will find a new home. Whoever places the highest bid wins these two Buicks, no matter what the hammer price on the auction block. 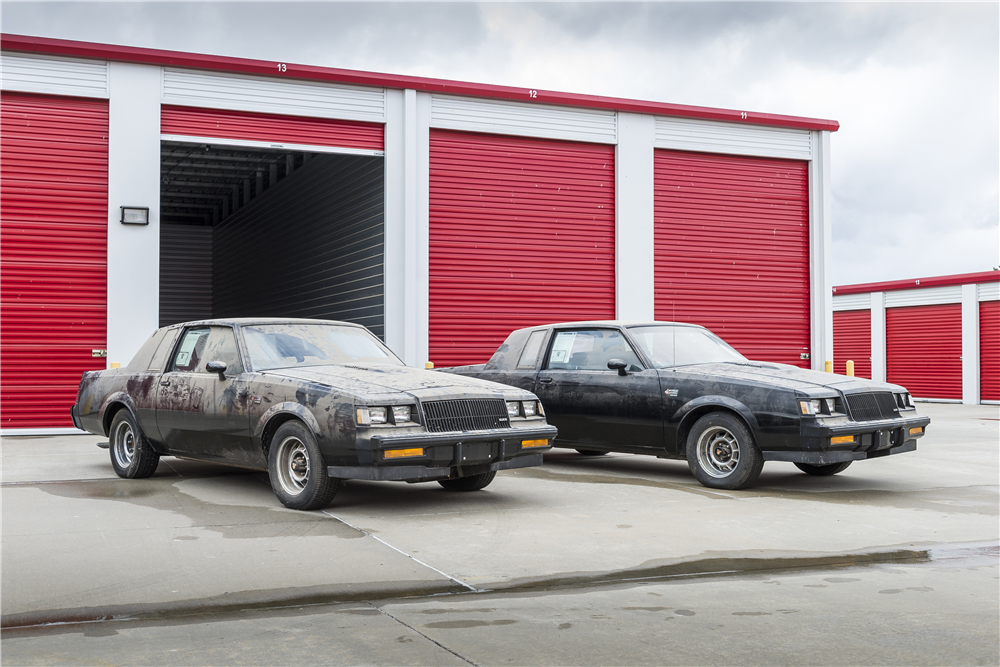 And these are no average Buicks. They are a matched pair of Buick Grand National coupes, which three decades ago were among the most feared muscle cars coming out of Detroit.

The Grand Nationals were based on the standard midsized Buick Regal coupes, but came equipped with 3.8-liter, turbocharged V6 engines that pumped out 245 horsepower, thanks in part to an intercooler to feed fresh air to the thirsty engine. The powerful V6 connected to a 4-speed automatic transmission to put all that power to the ground. 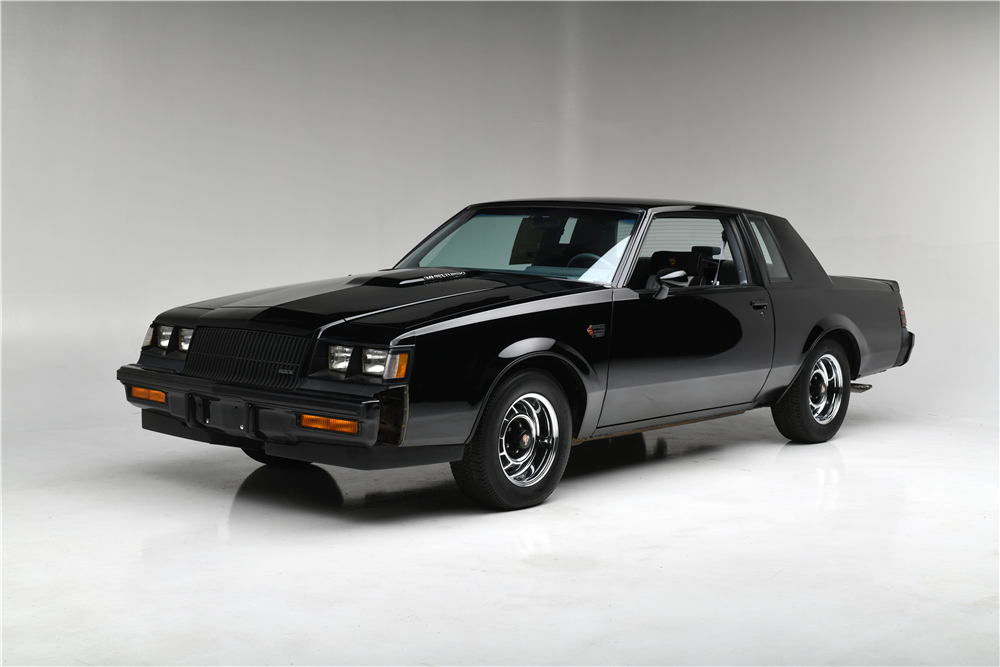 Fat Goodyear Eagle GT 15-inch radials on special aluminum wheels delivered better handling, especially with the stiffer suspension and anti-roll bars that were part of the Grand National package, which was last offered by Buick in 1987.

While 245 horsepower doesn’t sound like a lot in today’s world, back then the Buick Grand National was one of the most desirable cars on the road. Car & Driver’s review of a 1986 Grand National made that much abundantly clear.

“Corvette, get outa town. Mustang, move over. Camaro, keep your back to the wall at all times,” Car & Driver reported in its April 1986 issue. “The biggest, baddest gun west of the Pecos is loose in the streets, and there’s gonna be some shootin.” The magazine tested a Grand National and it delivered a zero to 60 mph time of 4.9 seconds, which it described as “quicker than a contemporary Corvette, most U.S.-market Ferraris, and even the Lamborghini Countach. Its quarter-mile was also impressive at 13.9 seconds.”

Others agreed. “With a turbocharged V6 under the hood that helped gain quicker accelerations and a standard black paint job that made the design of the Grand National more intimidating, this car is definitely considered as one of the true muscle cars, during its heyday,” wrote TopSpeed.com. “… The Grand National, in today’s standards, is like the 2013 Shelby GT500 with both cars being a working man’s supercar.”

According to the consignor, each of the Twinz comes with the original window stickers and other factory documents. Both cars are equipped with concert-sound stereo systems, power driver’s seats, power windows and door locks, G80 positraction rear differentials and their original Goodyear Eagle radial tires. Both cars are finished in gleaming black paint with contrasting gray interiors, an exceptionally attractive and desirable color combination. 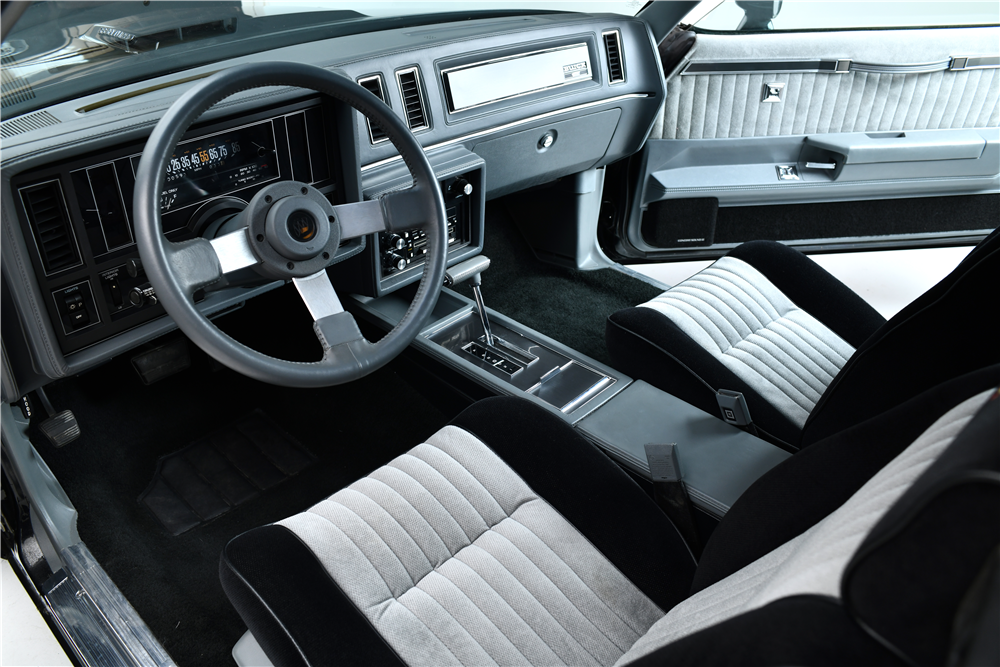 After being stored in a barn for 30 years, the Twinz are like new and ready for the open road. These cars look and perform exactly like they did when they rolled off the showroom floor in 1987, with all the accompanying documentation to prove their history. If you’re into Buick muscle cars, especially the Grand National models, these are the real deal.

You can only get this matched pair of Buick Grand Nationals at the Barrett-Jackson Scottsdale Auction. This truly is a once-in-a-lifetime opportunity, given that the cars have sequential serial numbers and each has less than 1,000 original miles. While all 1987 Buick Grand Nationals were special, the Twinz are a rare offering, standing alone as a pair that cannot be duplicated elsewhere. The Twinz are looking for a new home and they will soon find it.