Cars were streaming into the upper level of the South Hall of the Las Vegas Convention Center when I visited the site of the Mecum Auction on Wednesday afternoon. The first of them crosses the block around 10 a.m. Thursday. By late afternoon/early evening Saturday, some 1,000 collector vehicles will have paraded across the auction block in front of bidders.

Although the auction company has been staging motorcycle sales at the South Point hotel and casino for years, and handled the sale of a private museum’s car collection a few years ago, this is only its second annual collector car sale in the city that puts New York to shame when it comes to never sleeping.

As has become typical for Mecum these days, the main attractions are cars from major collections and modern supercars, though there’s a shift in the docket for Las Vegas. Instead of an array of contemporary muscle machines, there is simply one spectacular one — the 2012 Bugatti Veyron Grand Sports 16.4 that in 2011 was showcased on the company’s stand at the Frankfurt Motor Show.

The car wears a bright and brilliant shade of red, has been driven 6,060 miles since it rolled off the show stand at Frankfurt and — get this — recently underwent a full service that cost a mere $150,000. And to think you quibbled about the cost of your last oil change and tire rotation.

Regarding the private collections, there are six on the docket, but two of them are overwhelming in both numbers and scope. The estate of the late Ardell Brown is offering more than 130 of the cars he collected, and the Academy of Art University of San Francisco is revamping its collection into a public museum and offering 52 predominantly pre-war classics at the auction.

My assignment Wednesday was to walk among the array of cars in South Hall and select at least half a dozen that I’d want for my own collection.

Actually, I could have easily just selected six of the Academy of Art cars and been thrilled, but that’s not the point of this exercise, and it would belie the scope of the auction docket. So I’ve tried to span the cars on offer, while selecting those that appeal most to me, for whatever quirky reason. 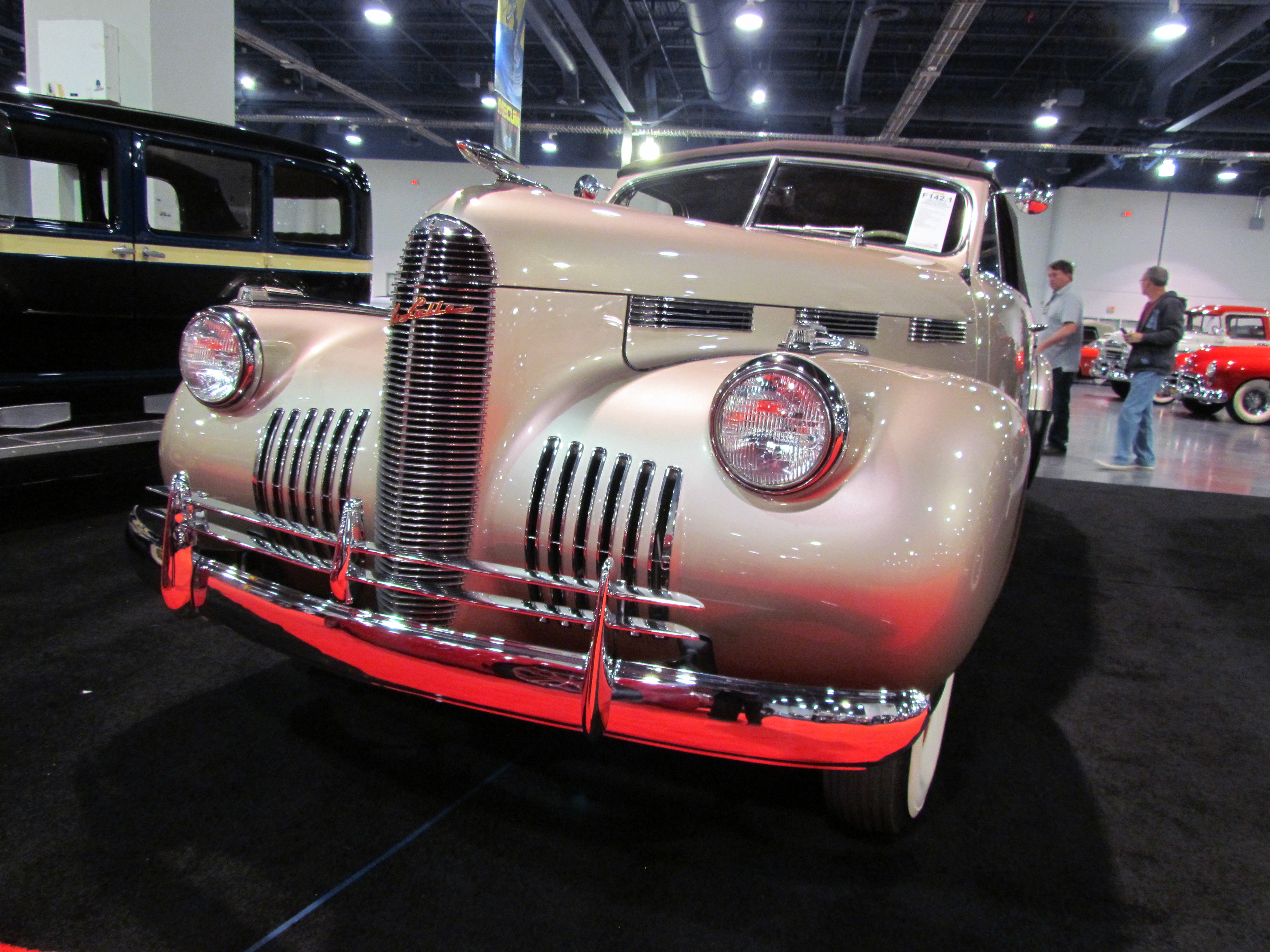 There are more expensive cars in the Academy of Art University Collection, but this 1940 LaSalle convertible kept drawing me back for another look, and then another. The color is Champagne Gold Metallic, with Burgundy leather interior and red wheels. The car is 1 of 425 produced in 1940, and its pre-sale estimated value is $70,000 to $90,000. Not expensive, but I cannot imagine being anything but proud to be seen driving it anywhere anytime. 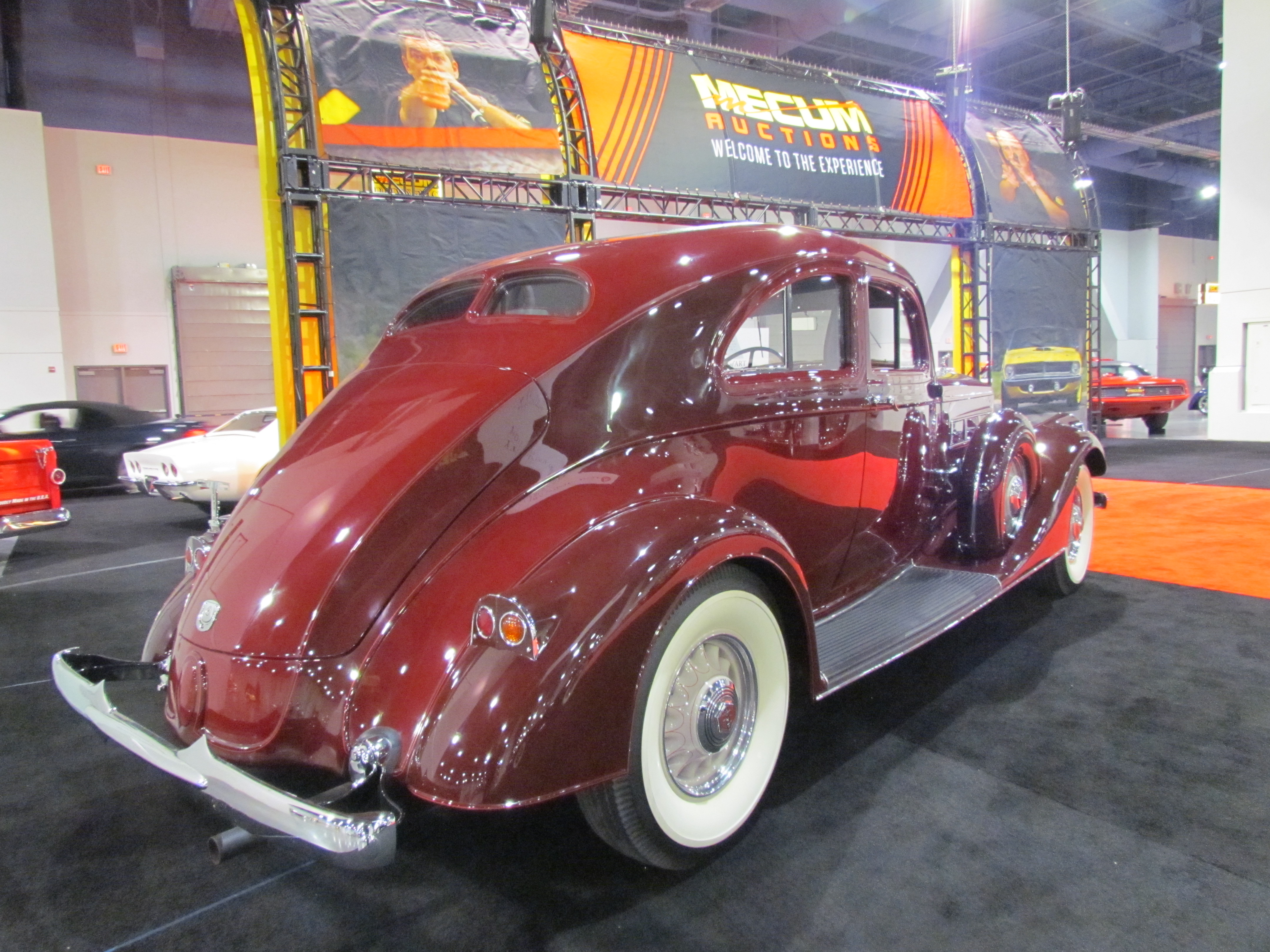 The Pierce-Arrow Silver Arrow was one of the world’s first concept cars, a dream machine showcased at the Chicago World’s Fair (aka Columbia Exposition or Century of Progress Exposition) in 1933. From 1934-36, Pierce-Arrow produced Silver Arrow production cars with some of the concept-vehicle styling cues, including the high-mounted but narrow rear windows. This 1935 example, part of the Academy of Art collection, has won awards at concours and a first prize from the Classic Car Club of America. 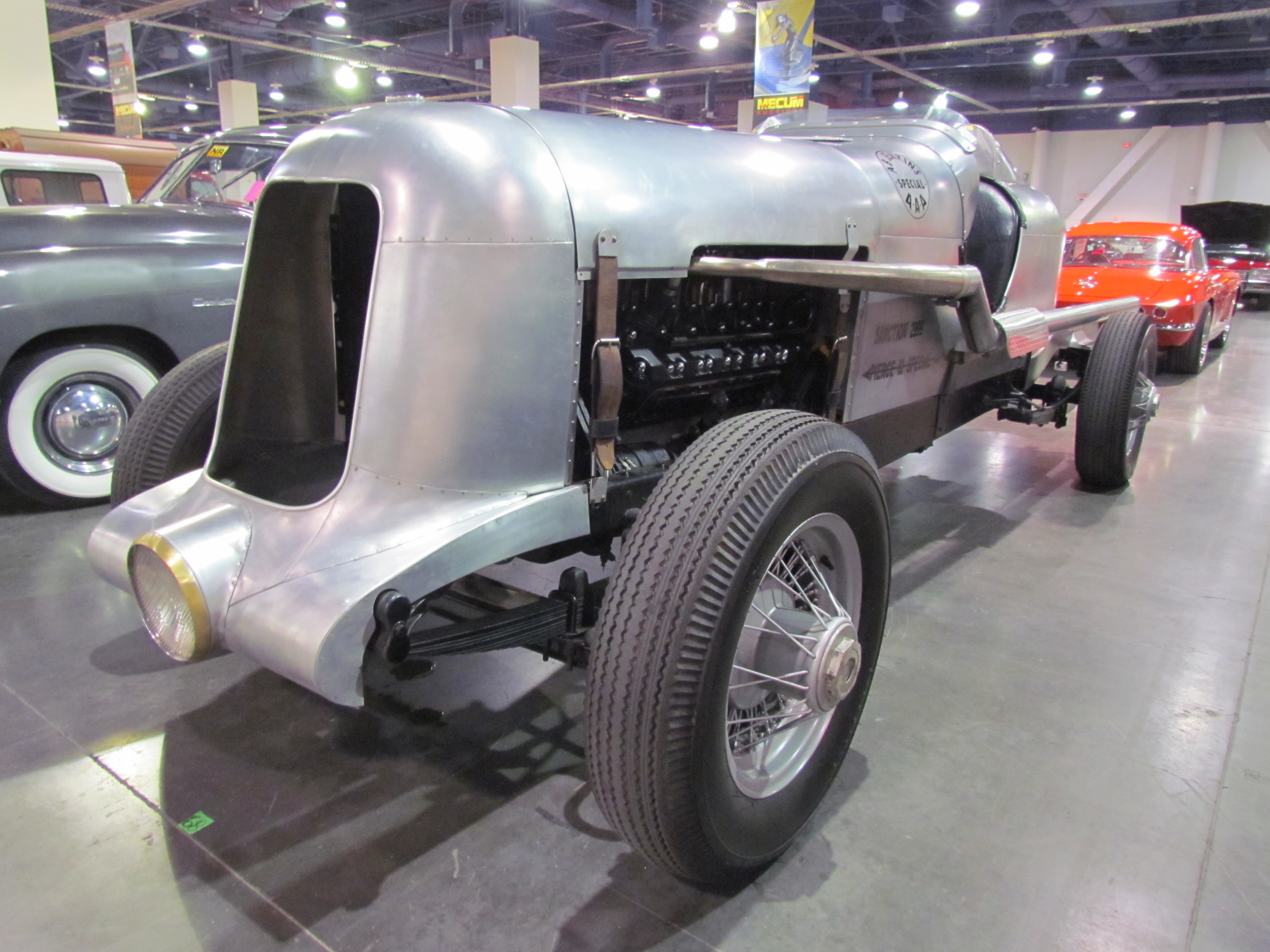 I’m no fan of replica or tribute cars, but I’d make an exception for this one from the Ardell Brown collection. It’s a replica of the record-breaking Ab Jenkins V12 Special that ran at Bonneville. It was completed in 2003 and was driven at 117 mph on the Salt Flats. Jenkins drove the original, covering a record 2,710 miles in 24 hours at an average speed of 112.96 mph and went back to Utah with the same car with an aerodynamic boat-tail body and set a land speed record of 127.229. His son, Marvin, who was crew chief on the Bonneville effort in the 1930s, helped build this replica. 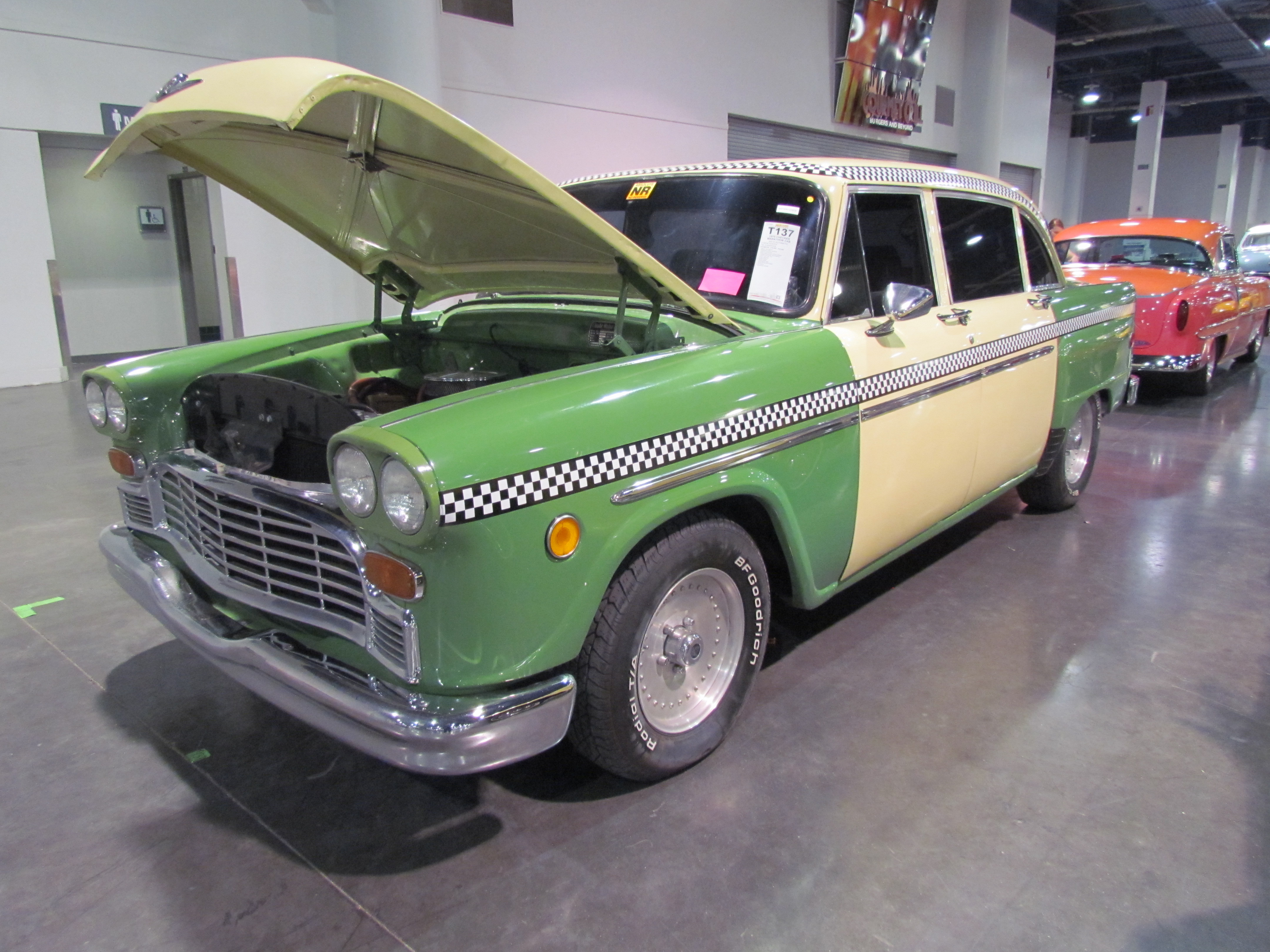 Forget Uber and Lyft. Opt instead for your own Checker taxi. Especially this one from the Ardell Brown estate collection. Though its pre-sale estimated value is only $10,000 to $15,000, this is no ordinary Checker cab. It has such performance upgrades and updates as a 350cid Chevrolet V8 with Edelbrock intake and 4-barrel carburetor, 9-inch Ford rear end, power steering and brakes, and aluminum wheels. 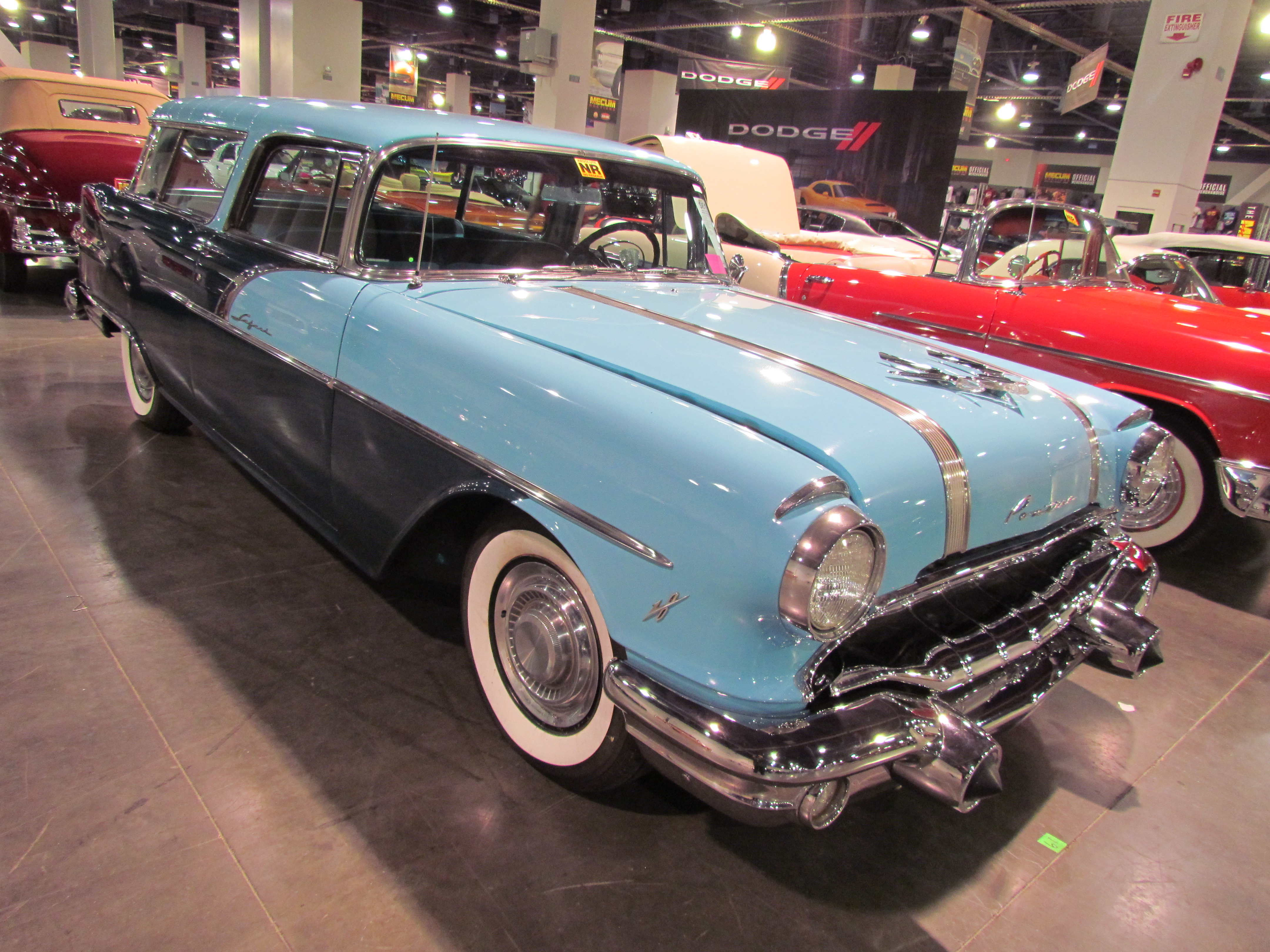 Chevy had its Nomad but Pontiac had its own 2-door wagon, the Safari. This one is done in two-tone Teal and Blue paint with matching interior and wide whitewall tires with full wheel covers, a stunning airplane on its hood, 317cid Strato-Streak V8 and vacuum-assisted brakes. Pre-sale estimate is $50,000 to $60,000. 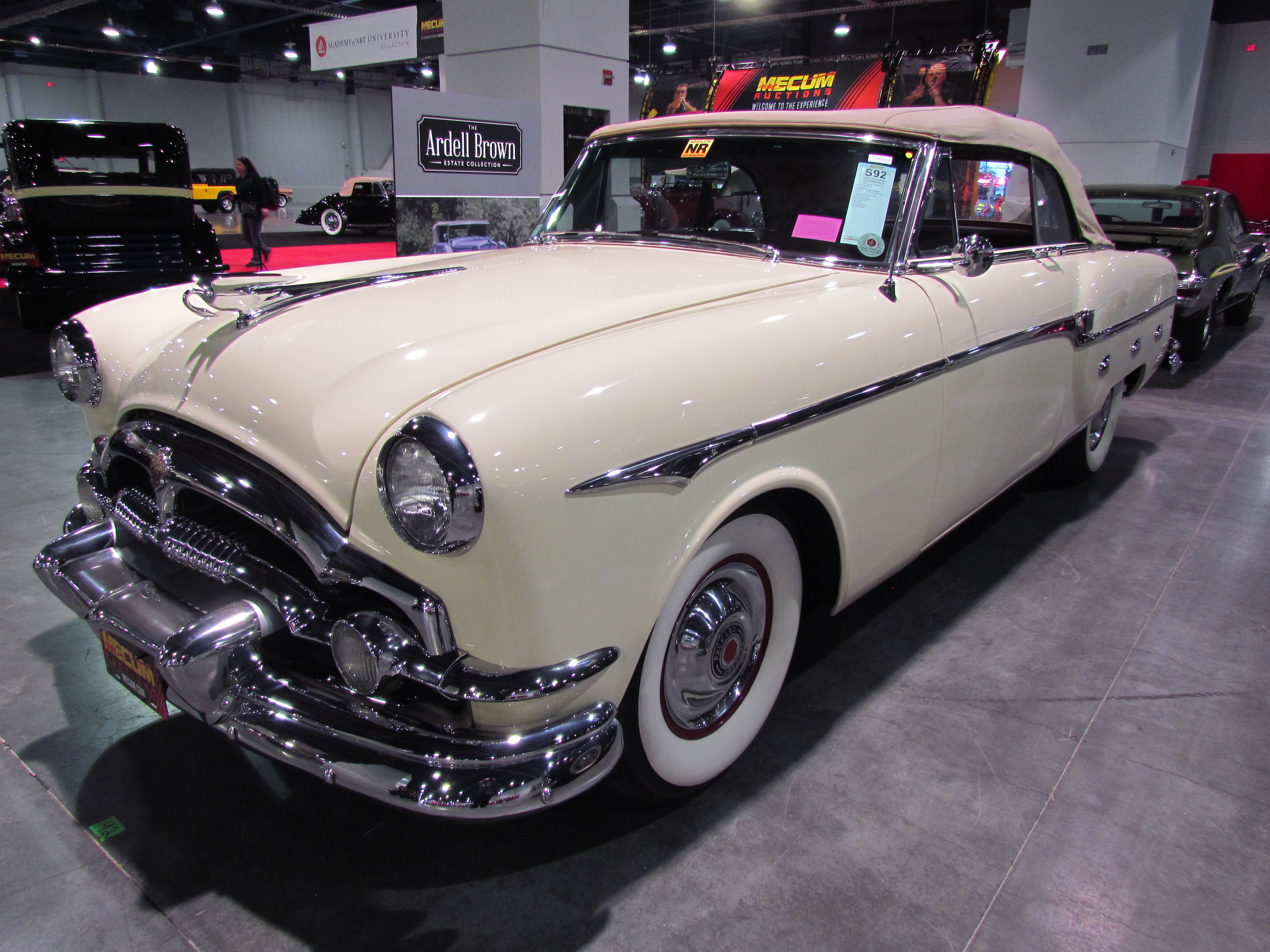 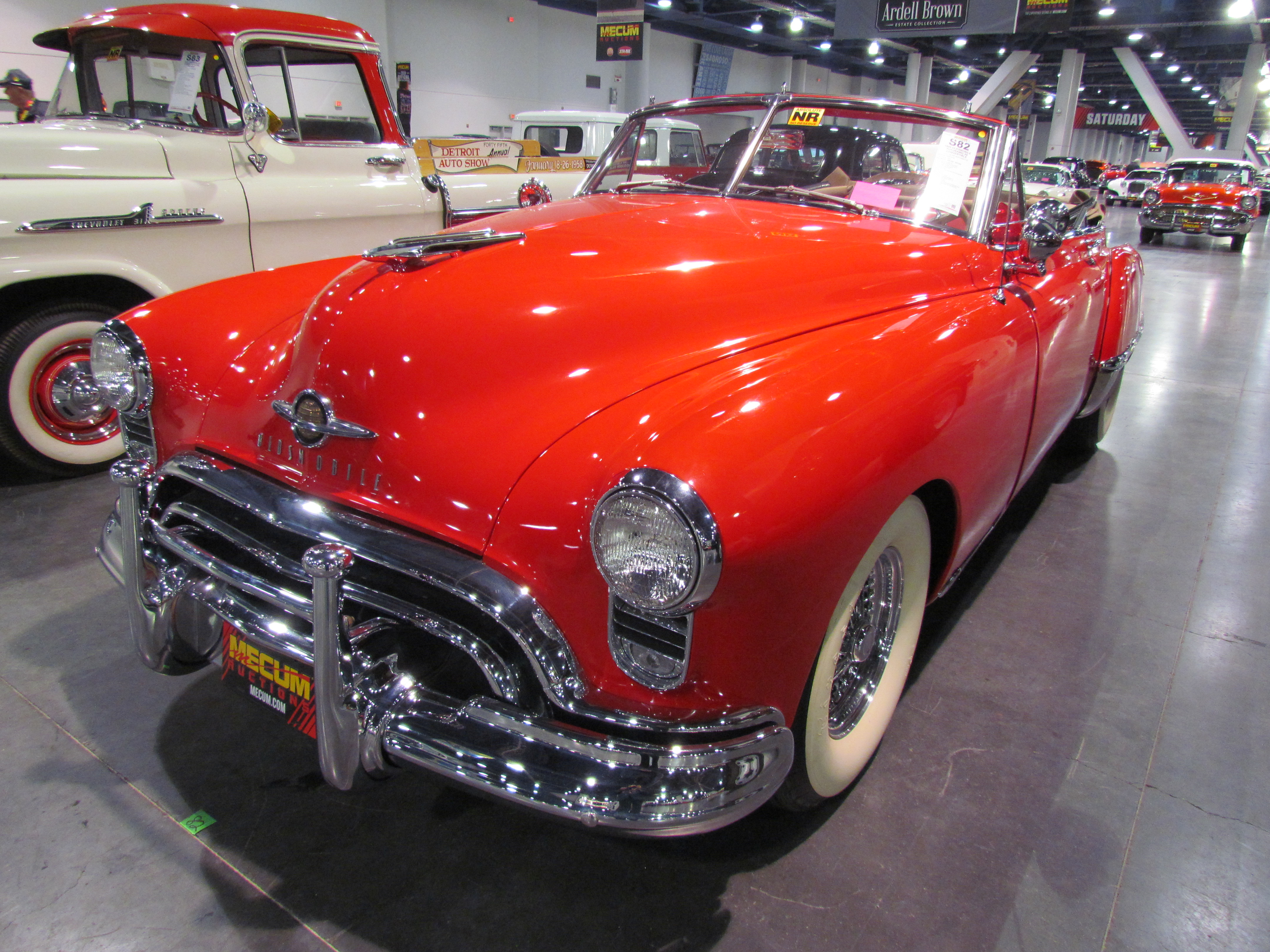 Yet another car from the Brown collection, this 1949 Olds was among the first equipped with the new Rocket V8 engine and thus was one of Detroit’s first muscle cars. This one is equipped with an Elvis Presley souvenir steering-wheel knob. 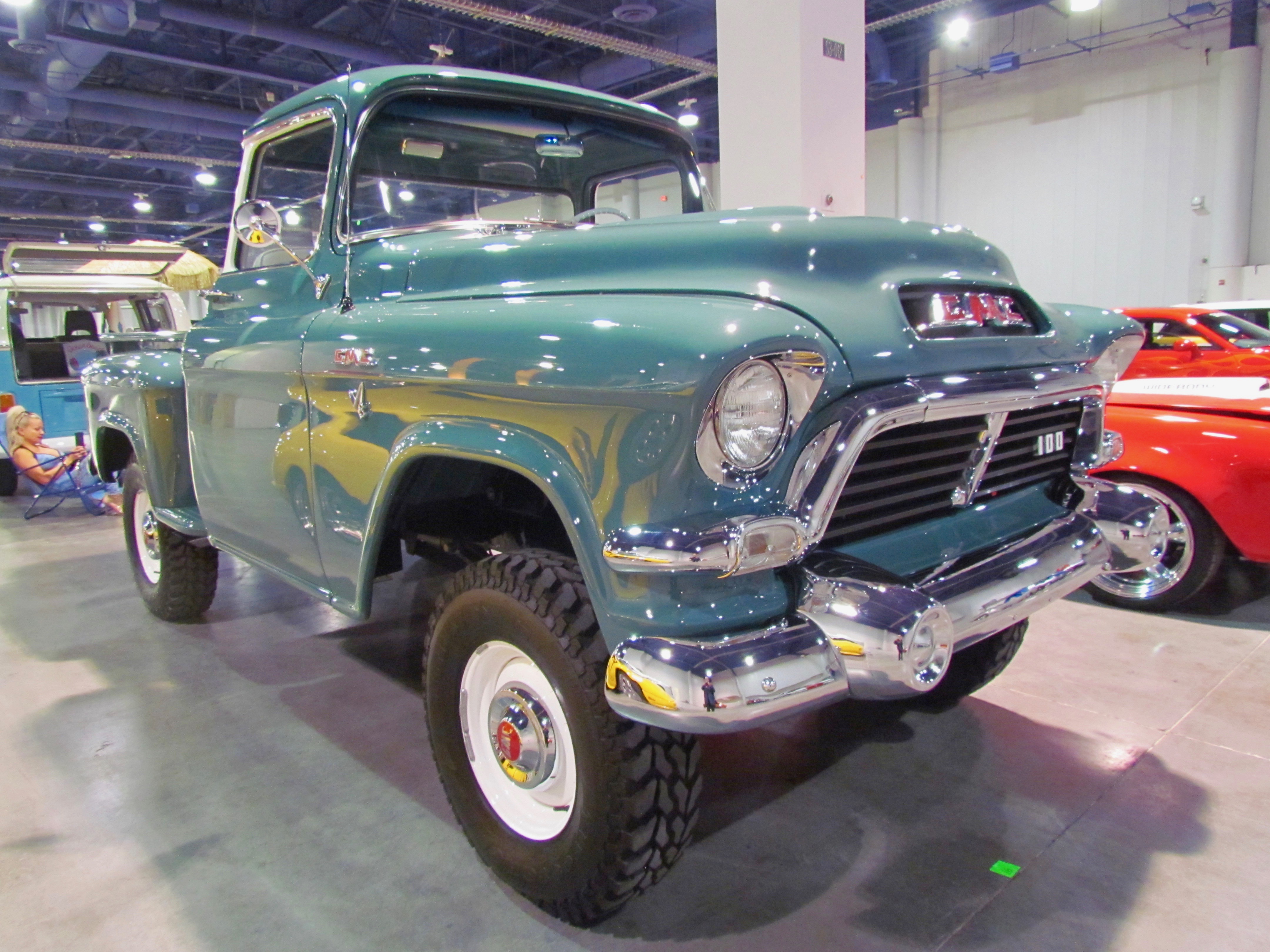 The 4×4 pickup has been owned by the same California family since the truck was brand new. At some point, the family restored and upgraded the truck with a 350cid Chevrolet V8, 700R4 automatic transmission, air conditioning, power steering, custom exhaust, modern audio system, and a transfer case and automatic locking hubs from a Jeep Wrangler. 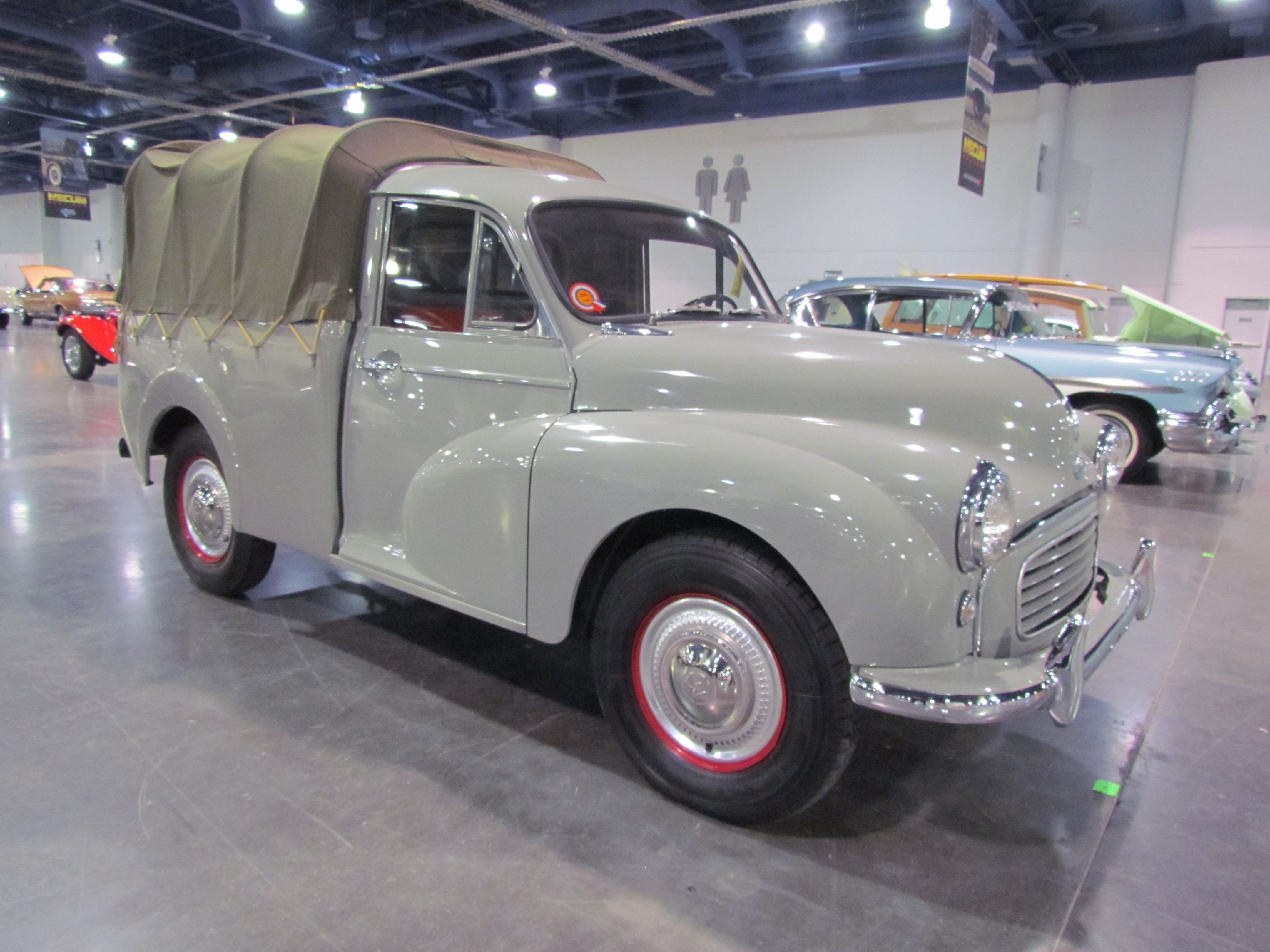 I like pickup trucks and this one is a cutie, and wouldn’t take up a lot of space in the garage. It’s a 1958 Morris Minor that has undergone a complete restoration, and given a little performance boost with a 1,275cc engine from an Austin-Healey Sprite equipped with a pair of SU carburetors. The color is Dove Gray, the interior is Newton commercial heat-pressed Cherokee vinyl, and the canvas cover for the bed is British made. Pre-sale estimated price is $20,000 to $25,000. 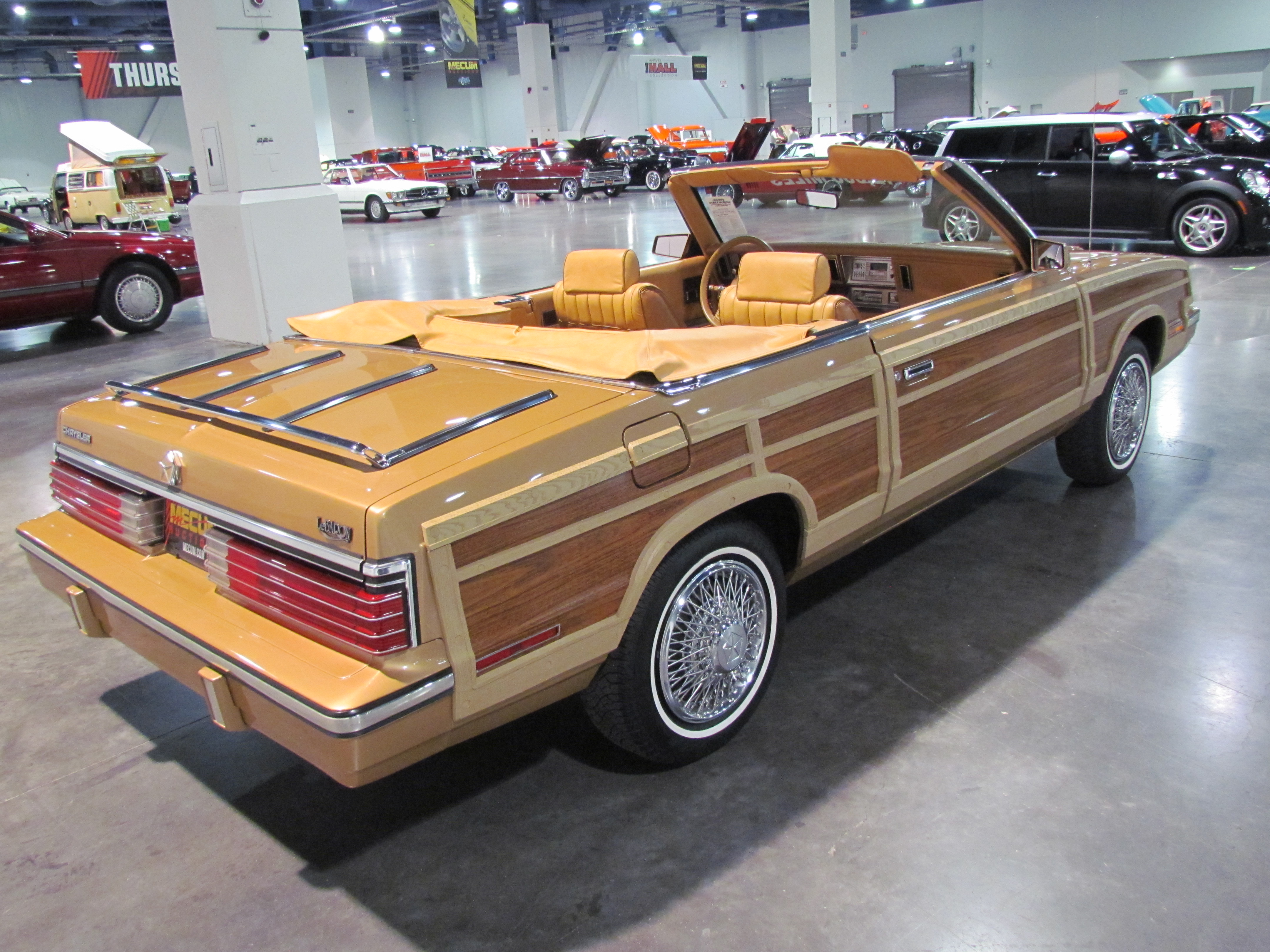 You’ve heard that it’s better to ask forgiveness rather than permission. I think that’s the case with this 1985 Chrysler LeBaron. I know. I know. It’s just a tarted-up K Car. But this one is gorgeous, even with its faux wood paneling, and has factory air, power windows and a power top. 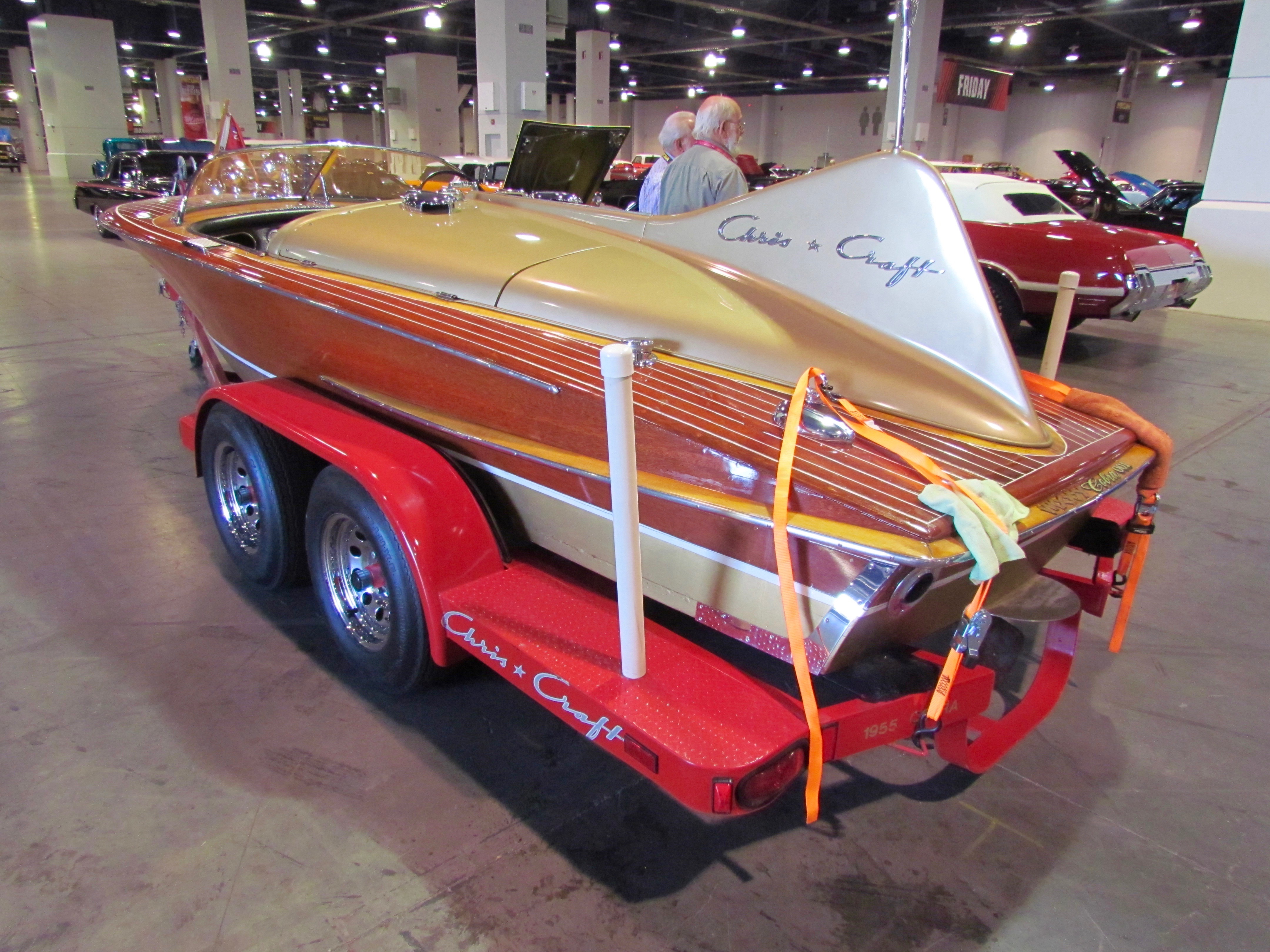 Speaking of wood, this vehicle has real wood, and would be a wonderful way to redeem myself from that ’85 LeBaron. This is a 1955 Chris-Craft 18-foot Cobra hull with trailer. And a gorgeous tail fin. And its original Hercules KBL 131-horsepower 6-cylinder engine. Back in 1955, it was the parade boat for the Tahoe Boat Company and was named “Gemalu,” though it’s now known as “Woody Cobra 001.”

A Cache of Cunninghams