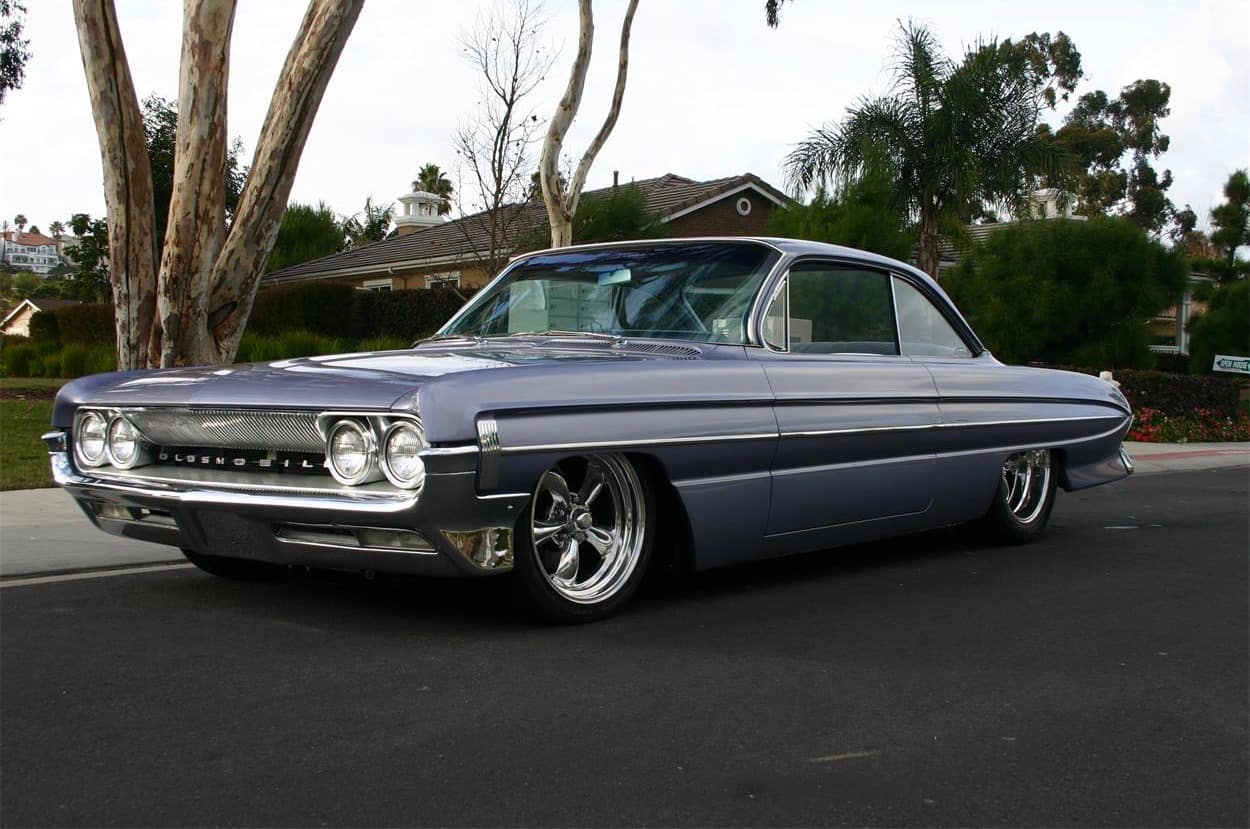 With the introduction of its compact F-85, Oldsmobile’s Dynamic 88 no longer was the division’s “entry-level” vehicle, not that there ever was much that you might have labeled ordinary about the basic Olds as it moved from chrome bejeweled in the late 1950s to the sleek two-door hardtop of the 1960-61 model years.

Oldsmobile produced seven versions of the Dynamic 88 for the 1961 model year, with total production of more than 137,000 units. The Pick of the Day is one of the nearly 20,000 1961-model-year Oldsmobile Dynamic 88 two-door hardtops, and it is a far cry from being entry level or ordinary in any aspect. 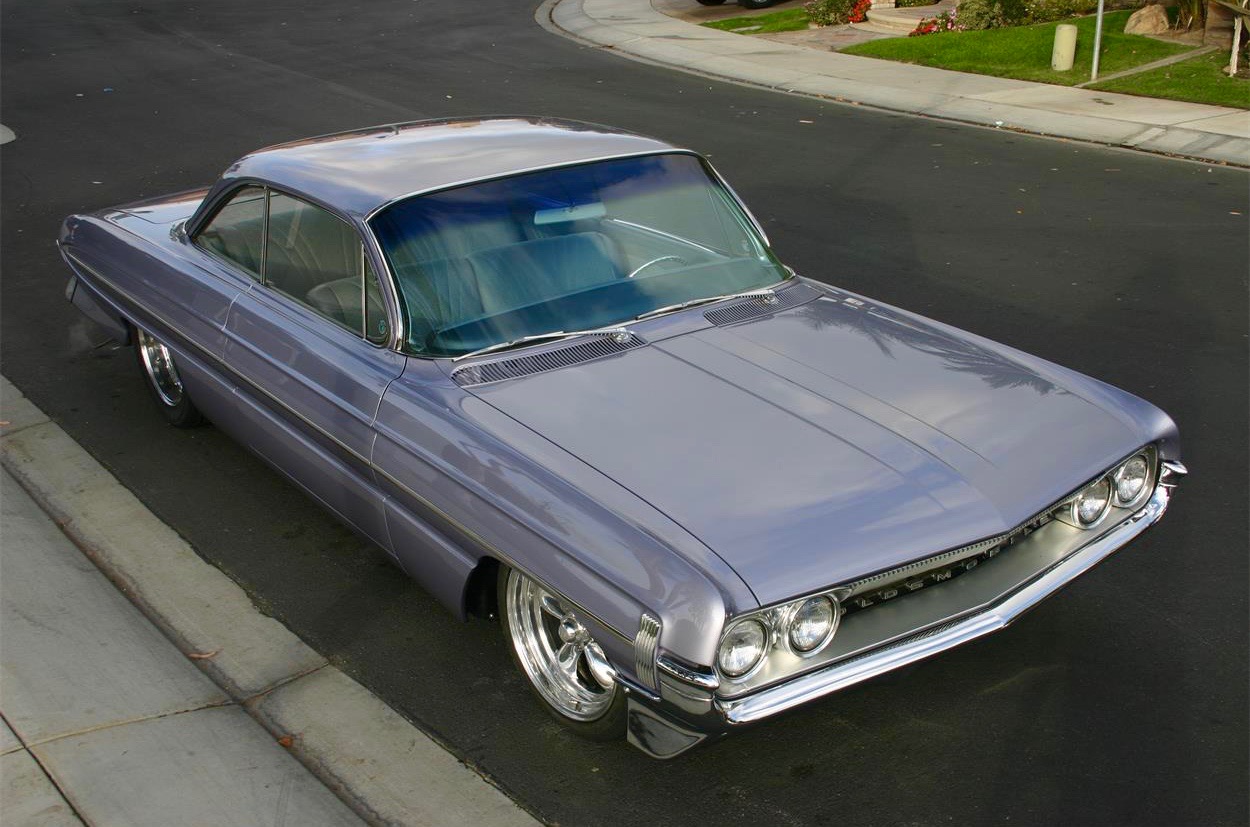 The car was customized by Rick Cox and was a finalist for the PHR/Goodguys Street Machine of the Year competition in Columbus, Ohio, notes the car’s advertisement on ClassicCars.com.

“Cox has taken elements from the custom crowd, infused them with the proven appeal of Pro Street-style steamroller rear tires, and stirred in a dose of technostalgia to complete the recipe for this outstanding ’61 Olds Dynamic 88,” notes the private seller of the vehicle.

“The combination of these elements under a non-traditional car like the Olds just plain works, and keeping the powerplant based on the original 394-cube V8 tickles the purist in us.”

The seller points out that the 390cid — aka the Rocket — was “the largest and last variant of the groundbreaking 303-inch ‘Kettering’ V8 introduced in 1949.”

“Fortunately, Rick was able to locate and acquire a rare Hilborn stack fuel injection manifold to top his 394,” the seller says, “and to add yet another twist to the car’s definition, it’s been plumbed for modern (read: reliable and drivable) electronic fuel injection. Fuel Injection Engineering performed the upgrade, which is the modern name Hilborn is going by these days.

“The result is a truly nostalgic engine with plenty of flavor and enough performance to pull the Dynamic 88 down the freeway with ease.

The seller notes that this was a clean original Olds when acquired by Cox, who narrowed the rear frame rails to fit the wide rear Mickey Thompson tires. He also installed a 9-inch Ford rear, four-link suspension with Air Ride Shockwave airbags at all four corners. 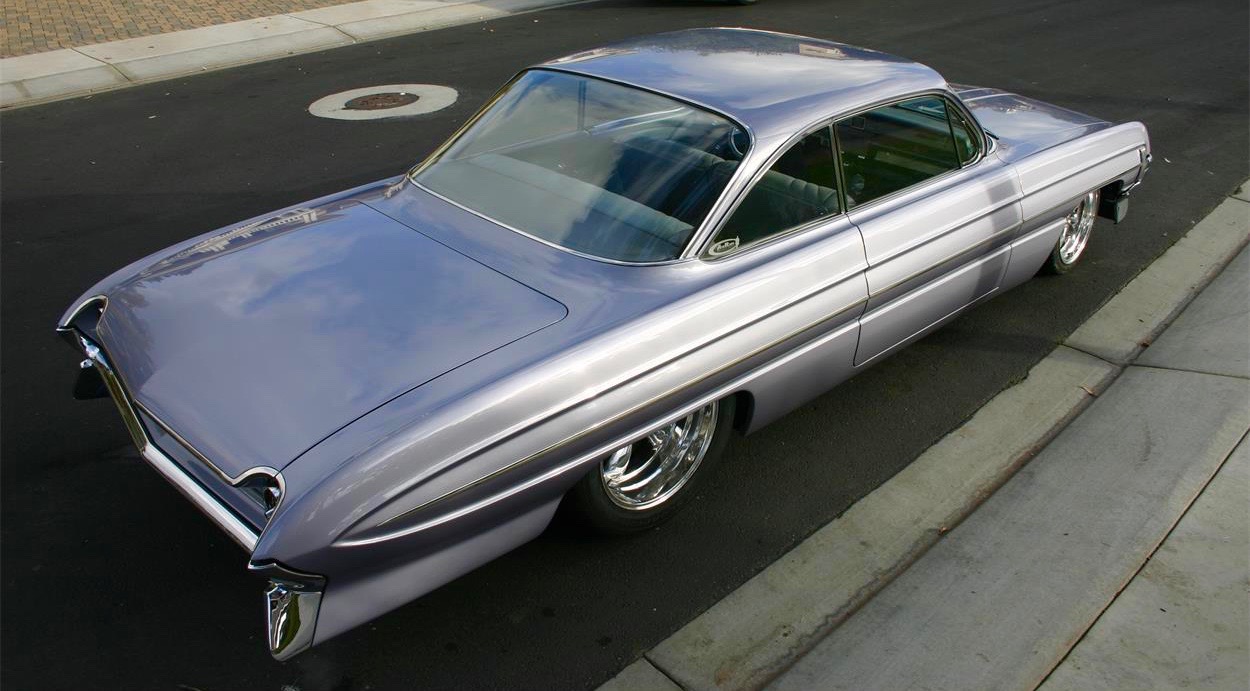 For color, Cox chose a modern interpretation of the original Twi-Lite Mist, and thus the car’s “Purple Passion” nickname.

“It’s a good tip for builders looking to make a statement, and we’d second Rick’s recommendation to take a look at the factory colors from the past to truly strike a stylish chord when choosing paint,” the seller says.

Beneath the bubbletop, the interior features gray tweed over the original seats with purple leather accents. New Nordskog gauges are set into the original pods. A B&M shifter controls the Turbo 350 gearbox.

And that’s just what Cox did. Since acquiring the car from the builder, the seller enlisted Buxton Motorsports to upgraded the exhaust system and add auto-ride leveling while upgrading the air suspension. Buxton also reworked the rear end, axles and brakes.

The custom wheels were changed to Colorado customs with a larger offset.