This AMX is black and white and red-y to run

It was in 1954 that Nash-Kelvinator and Hudson merged to form American Motors. Four years later, both Nash and Hudson brands were discontinued as the company modernized its product lineup, to a point. AMC offerings tended to be rather boxy and uninspiring until the mid-1960s when the Marlin fastback was introduced.

The Marlin was supposed to compete with Ford’s Mustang, but it was a larger, sleeker car with room for six people. It wasn’t until 1968 that AMC really had a pony car competitor, in the form of the Marlin’s replacement, the Javelin.

And midway through the model year, the company rolled out at the Chicago Auto Show an even racier offering, a two-seat sports car called the AMX, the name being shorthand for American Motors eXperimental. Here was a car that competed not with the Mustang or Chevrolet’s Camaro, but with Chevrolet’s all-out sports car, the Corvette.

The Pick of the Day is a 1969 AMC AMX offered for sale on ClassicCars.com by a private owner in Wonder Lake, Illinois.

The AMX was based on a shortened version of the Javelin’s platform, and it came with a 290cid V8 rated at 225 horsepower and linked to a 4-speed manual transmission. The coupe also had thin-shell bucket seats and rode on stiffer suspension and glass-belted Goodyear tires. 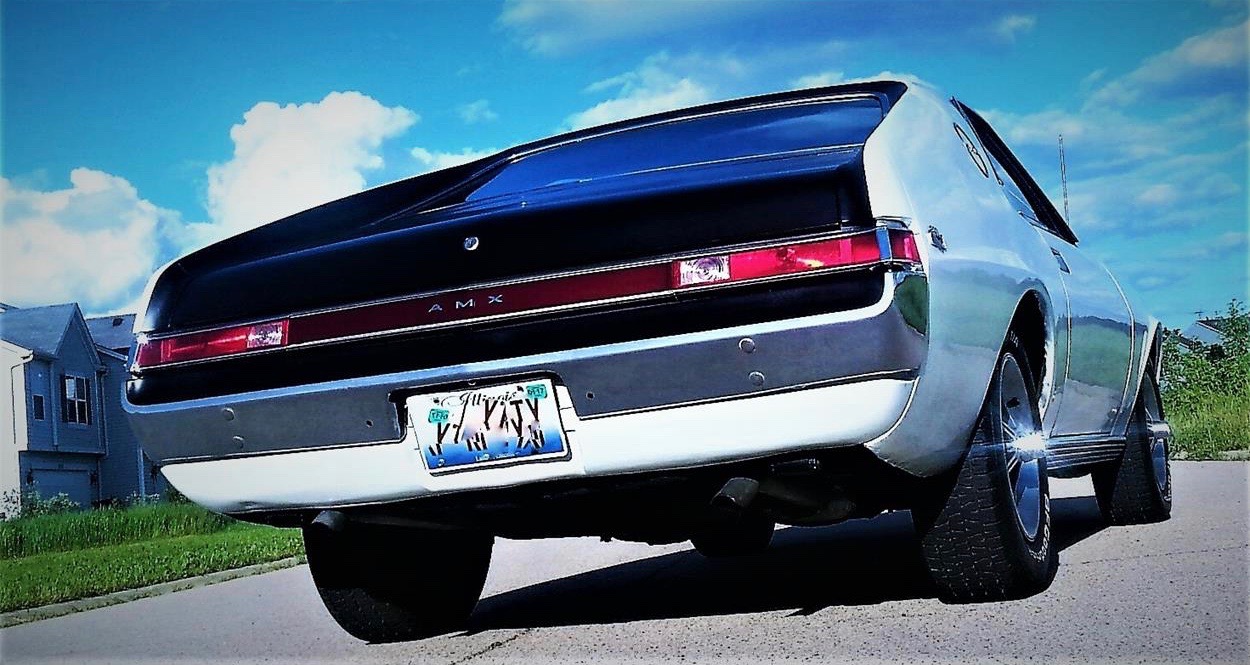 The seller advertising the AMX on ClassicCars.com notes that it was selected as the “best engineered car of the year” by the Society of Automotive Engineers.

The example being offered has the 390 X-code Go Pack powertrain (425 pound-feet of torque at 2,800 rpm) and a notary-verified 51,853 miles on its odometer. The car formerly was owned by a Top Fuel drag racing driver/team owner and has been well-maintained with some restoration work (including a new headliner and carpet).

“Solid as they get, at 49 years and counting,” the seller notes.

The seller says the two-tone paint on the car was inspired by AMC’s prototype example and was a production option for the 1970 model year.

A new tachometer has been installed.

“Recent upgrade, tachometer upgrade to three wire ‘air coil’,” the seller explains, “calibrated… same as NASCAR tach drive and accuracy, maintains all O.E.M. looks with the added reliability of maintaining ignition even if tach fails, unlike O.E.M. set up which would render the vehicle inoperative if the 50-year-old electronics failed. Backed by a six-year warranty.”