Getting in touch with French ancestry in a Citroen C4 Picasso

Getting in touch with one’s ancestry is all the rage these days, be it through DNA testing, websites such as Ancestry.com or just by asking family members what they remember about their grandparents.

But few are able to actually visit the lands where their families originated. My wife and I were lucky enough to do that on our honeymoon, when we drove to a small town on the Franco-German border in, appropriately, a 2017 Citroen C4 Picasso.

I had hoped to pick up some sort of classic car to make our way to Montbronn, a town about an hour’s drive north of Strasbourg, especially if it was German because I’m rather partial to them. The rental agency didn’t have anything like that, but offered us the C4 because it was a size to which Americans may be more accustomed.

Though it was a late-model car, it was still an amazing experience to drive a Citroen, one that is practically unique to the European continent. The marque left the United States in 1974 and are reserved more for car shows than rental lots in the United States. Seeing the double-chevron logo certainly made me smile.

The crossover is just about 181 inches long and 72 inches wide with a 111-inch wheelbase, which puts it on par with Toyota’s C-HR and Subaru’s Crosstrek. By American standards, it’s fairly small, but it was a perfect fit in the narrow, crowded streets of Strasbourg.

The C4 has a slightly unconventional dashboard, in that the gauge cluster is in the center. It did increase my visibility of the road, but constantly glancing to the right to check my speed on foreign roads wasn’t exactly ideal.

That gripe aside, the offered tech was nice. The controls for the air conditioning and radio were simple enough to figure out, and the car had Android Auto, which means Google Maps navigation can play over the stereo speakers. Had we not had that, I guarantee I would still be lost somewhere in eastern France or western Germany.

I saved the best features of the interior for last: The massive amount of visibility. The C4 Picasso has a huge windshield that, when the sun visors are physically slid back, allows passengers in the front to see the top of church spires without leaning forward.

Those in the roomy rear seat aren’t forgotten. A small pillar separates the gigantic windshield with a panoramic sunroof the doesn’t block even the highest of mountains.

The huge windows were welcome, as our drive took us past gorgeous scenery that changed from sprawling fields and ancient forests to tiny towns in the blink of an eye. I can’t stand the typical looky-loo drivers who are more enraptured by their surroundings than the road, but in this case, I didn’t mind sticking to the 60 kph speed limit.

When we pulled into a church parking lot in Montbronn, my wife’s entire mood changed. She had grown up hearing stories about the family crystal factory that was destroyed by the French in the late 1800s, prompting her ancestors to flee across the Atlantic to start a new life in America. She had held the heavy vase those ancestors brought with them to remember the Old Country.

Now, she was seeing it for the first time. She gazed out those huge windows in the C4 and saw the town where her ancestors had lived for years. It just so happened that we were parked outside of the same church that her great-great-great-grandparents attended.

After a very, very short wander, it was back in the car to return to Strasbourg. We intentionally ignored Google Maps and took a more meandering path back to the big city, letting the 1.2-liter Puretech 3-cylinder engine loose on the rare straightaway. Paired with an automatic transmission, it would feel positively lethargic on an American highway, but given the narrow backroads we were on and the paddle shifters, it was an enjoyable enough drive.

Citroen prioritized comfort over performance when designing the Picasso C4, but I wasn’t disappointed in the handling of the car. Some enthusiasts would undoubtedly ask more of a car — as I nearly did when sharing a narrow, forested road with semitrucks — but given the small crossover design, I felt it held its own. The car responded when I needed it to and steering became second nature, which is good given my focus needed to be on not hitting a speeding truck.

It’s a shame Citroen pulled out of the United States in the mid-‘70s (though a comeback in the near future is rumored), because the C4 Picasso would be a hot ticket car on this side of the Atlantic, especially with the ongoing small SUV craze. It was roomy enough for a family vacation and the panoramic sunroof paired with the huge windshield would make a great touring vehicle in Yellowstone or New York City. 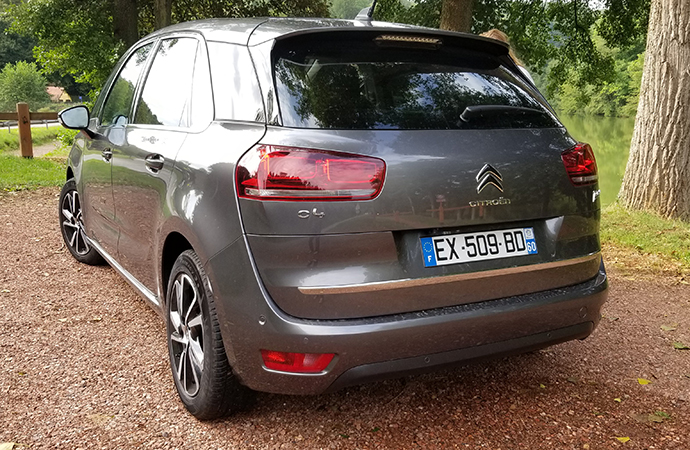 The small cargo area would be a concern for some, though there is comparable storage areas in small SUVs in the United States. I would say the biggest concern for the C4 Picasso in America would be its very European styling — something that was a negative for Citroen in the past — but I think the futuristic design would actually appeal to the masses.