There are many parallels between the worlds of art and automobiles, especially when it comes to culture and collecting. So it probably only made sense when the organizer of major art (and jewelry) shows around the world announced about a year ago that it would stage “the first global salon for the world’s most important and valuable automobiles of the past, present and future.”

The show would be called Grand Basel, with additional such events to be held in Miami and Hong Kong, said the Swiss-based MCH Group. Automobiles would be presented as art, although many of them also would be for sale, just as at an art fair.

The inaugural Grand Basel was staged this past week. One of its features was the exhibition of “six curated frames,” one by each of the event’s board members as their “personal interpretations of automotive culture.”

“Grand Basel presents not just cars, but everything that is associated with and inspired by cars,” the organizers said. “With input from the unique advisory board, it showcases the epitome of automotive culture.”

Here are those “frames,” and their explanations: 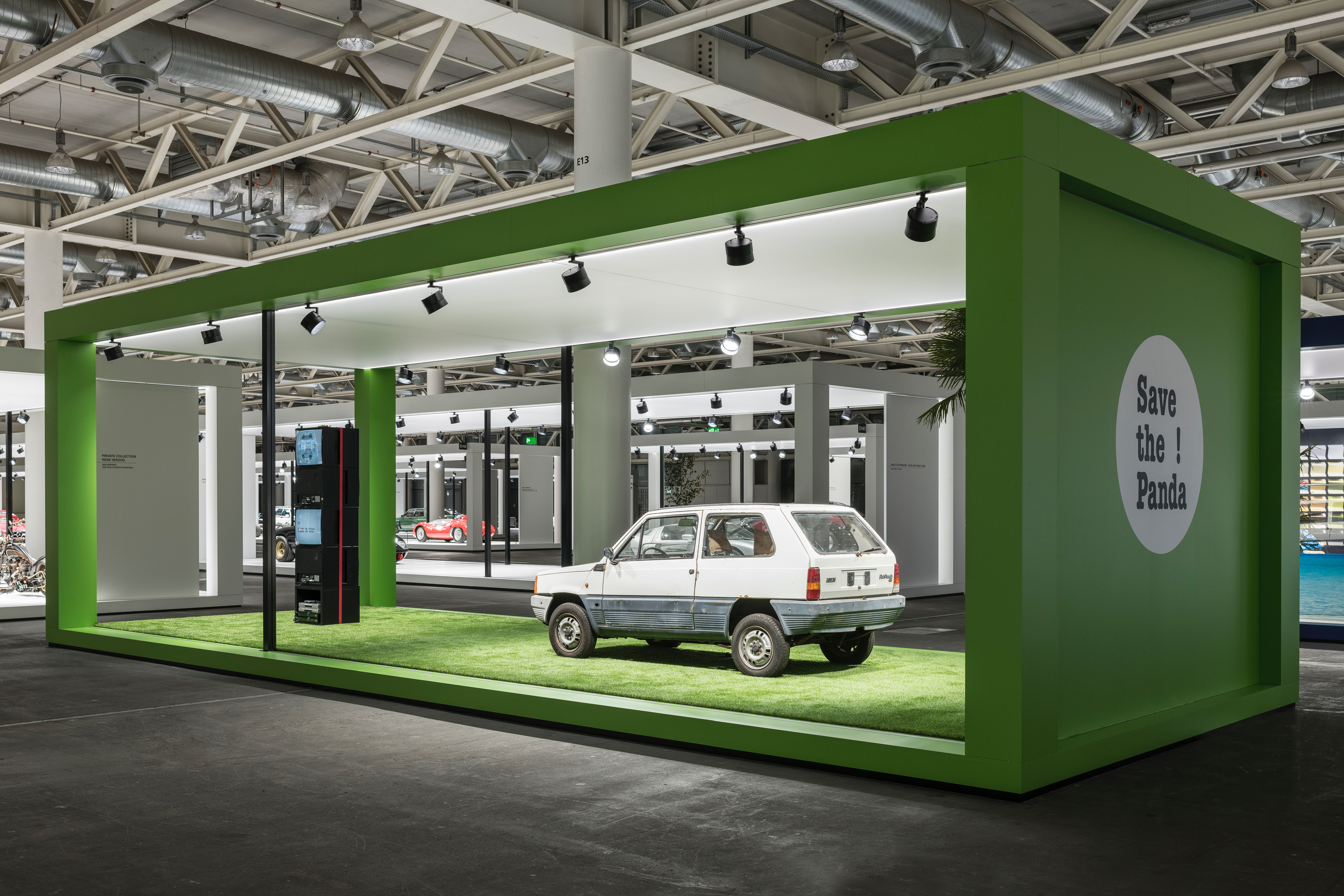 This Panda was found on Sardinia in 2008 and was displayed at Grand Basel with three other artifacts of the late 20th Century: A Voxson Tanga FM car radio, Olivetti Valentine typewriter and a Hantarex MGG EQ/3 LCD television monitor.

“The Panda is the very last car made for people, the last surviving witness of a time when the car was still serving humans — and not the other way around,” said Prof. Paolo Tumminelli, Grand Basel advisory board leader, director of the Goodbrands Institute and design critic and professor of Cultural Sciences at Cologne University of Applied Sciences.

“It is tireless, unpretentious, immediate, uncomplicated: a T-shirt on wheels, pure mobility. While not beautiful in the classical sense, and easy to overlook as a masterpiece of rational architecture, the Panda irrevocably completes the development of the popular automobile, which began in 1908 with the Ford T.

“The Panda was built, bought, used, consumed and abused – and the example of display at Grand Basel exemplifies its huge cultural impact in this respect. Furthermore, its design concept is now perhaps more topical than ever: a role model of the ecologically and economically sensible, with the principles for a truly sustainable automobile of the future.” 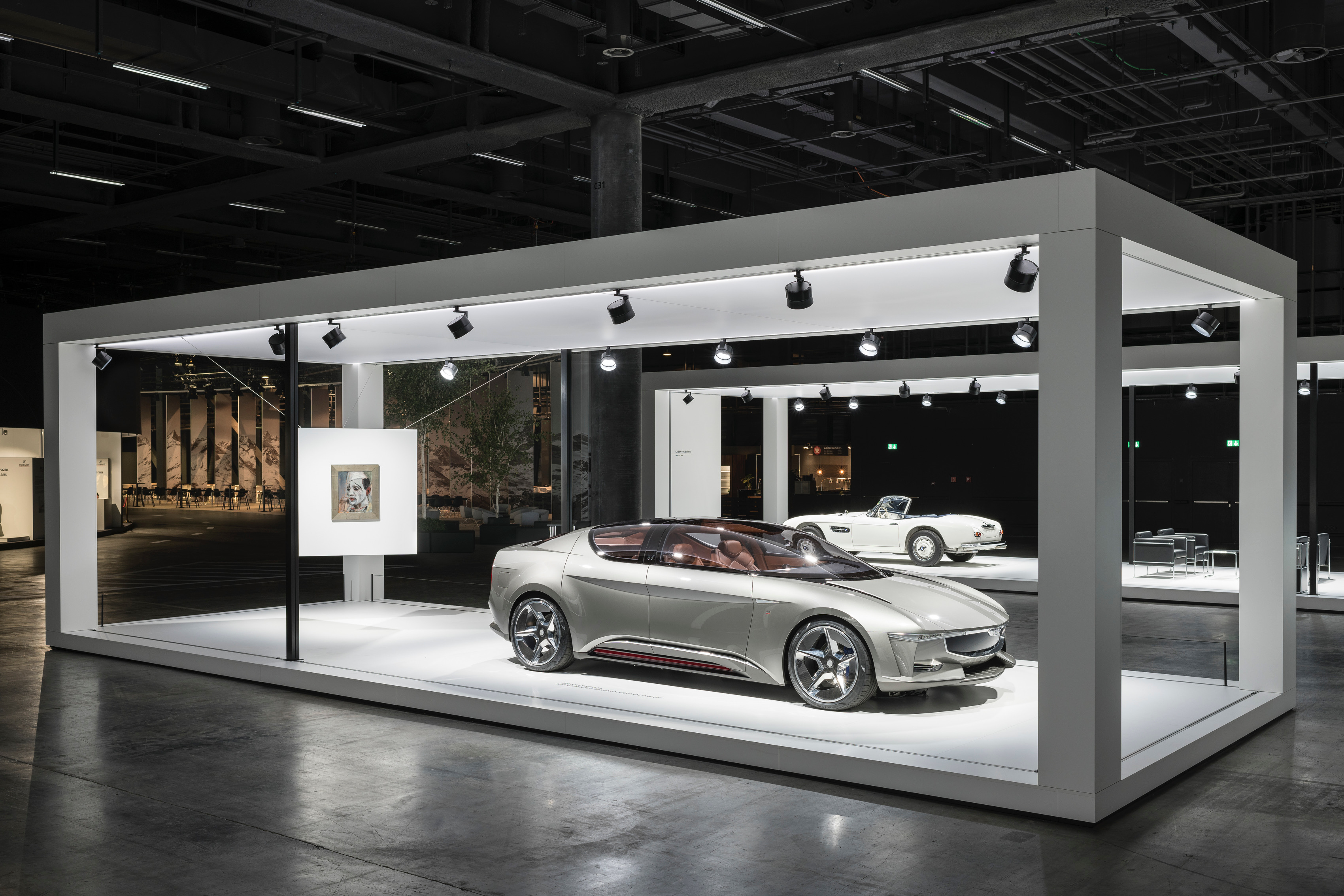 The Sibylla GG 80 is one of the most recent automobiles designed by Giorgetto Giugiaro and his son, Fabrizio. It is a four-seat, all-wheel-drive electric vehicle created in conjunction with Envision, a “smart energy management company.” It was displayed with images of Sammy Davis Jr., a Native America and Pagliaccio (the clown), representing three of Giugiaro’s “youthful passions.”

Giugiaro, an advisory board member for Grand Basel and acclaimed as the car designer of the 20th Century, presented his “frame” as part of his 80th birthday celebration. 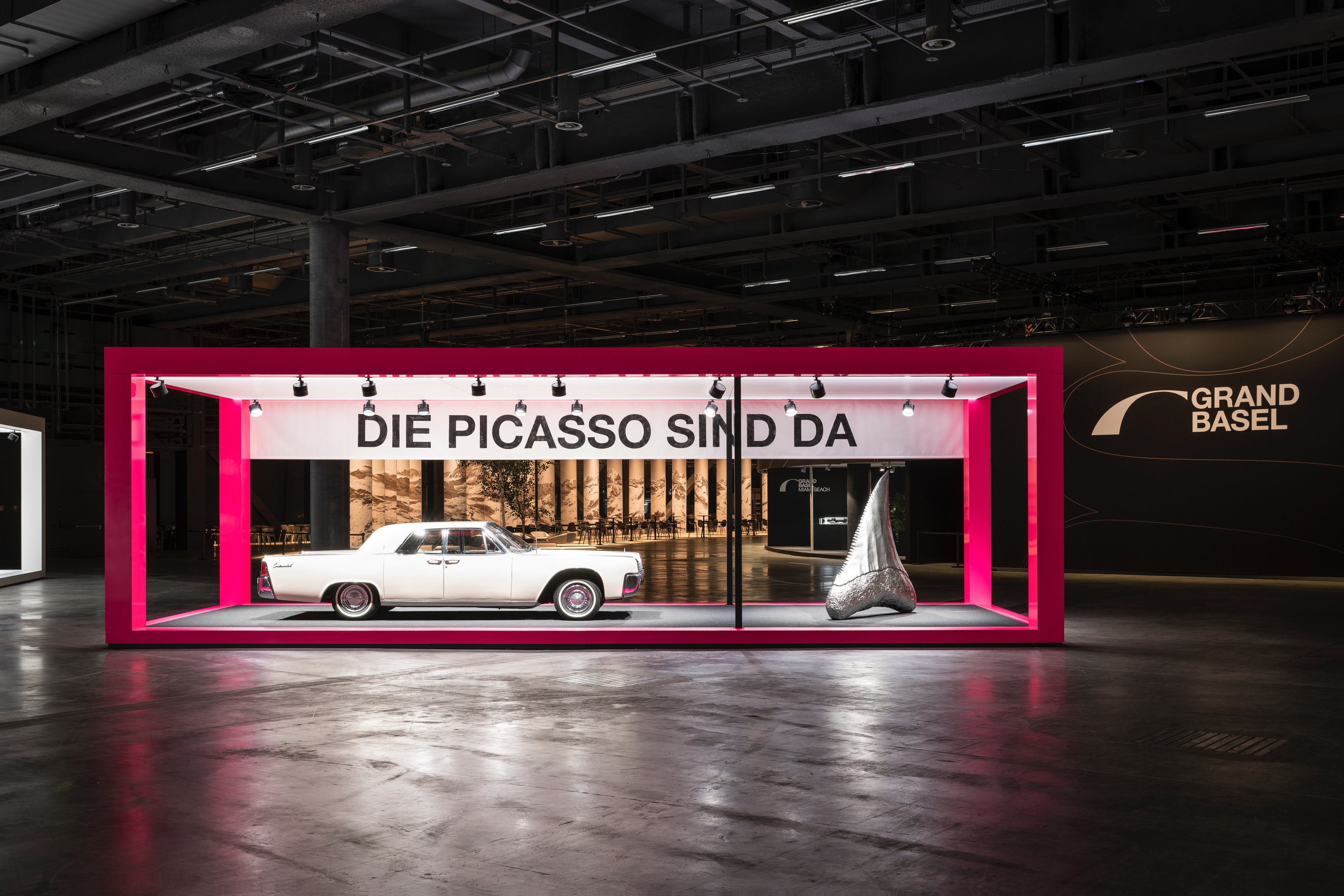 Swiss-born artist Sylvie Fleury is founder of the She Devils on Wheels car club and has a passion for American automobiles. The Lincoln, formerly owned by Pablo Picasso, was displayed with Fleury’s “Labrisrynthe” sculpture.

“I was thrilled by the chance to present Pablo Picasso’s last personal car in my frame at Grand Basel,” Fleury said. “His white Lincoln Continental, a huge, powerful machine, shows an interface between art and design. Picasso was a true car connoisseur, and this 1963 car is still owned by his family.

“I parked the car in my frame like it was a sculpture, and the masculine design is played off against my two-meter-tall chromed shark-tooth artwork, which harks back to a time when it was fashionable for women to wear a real shark tooth as a necklace pendant.

“Another significant element is the banner that reads ‘Die Picasso sind da’ (‘The Picassos are here’. This pays homage to the amazing initiative that many Basel residents supported – culminating in 1968 – to ensure that significant Picasso paintings were able to stay in the city’s Kunstmuseum, rather than being sold off. So now, it’s like Picasso is driving back to Basel!” 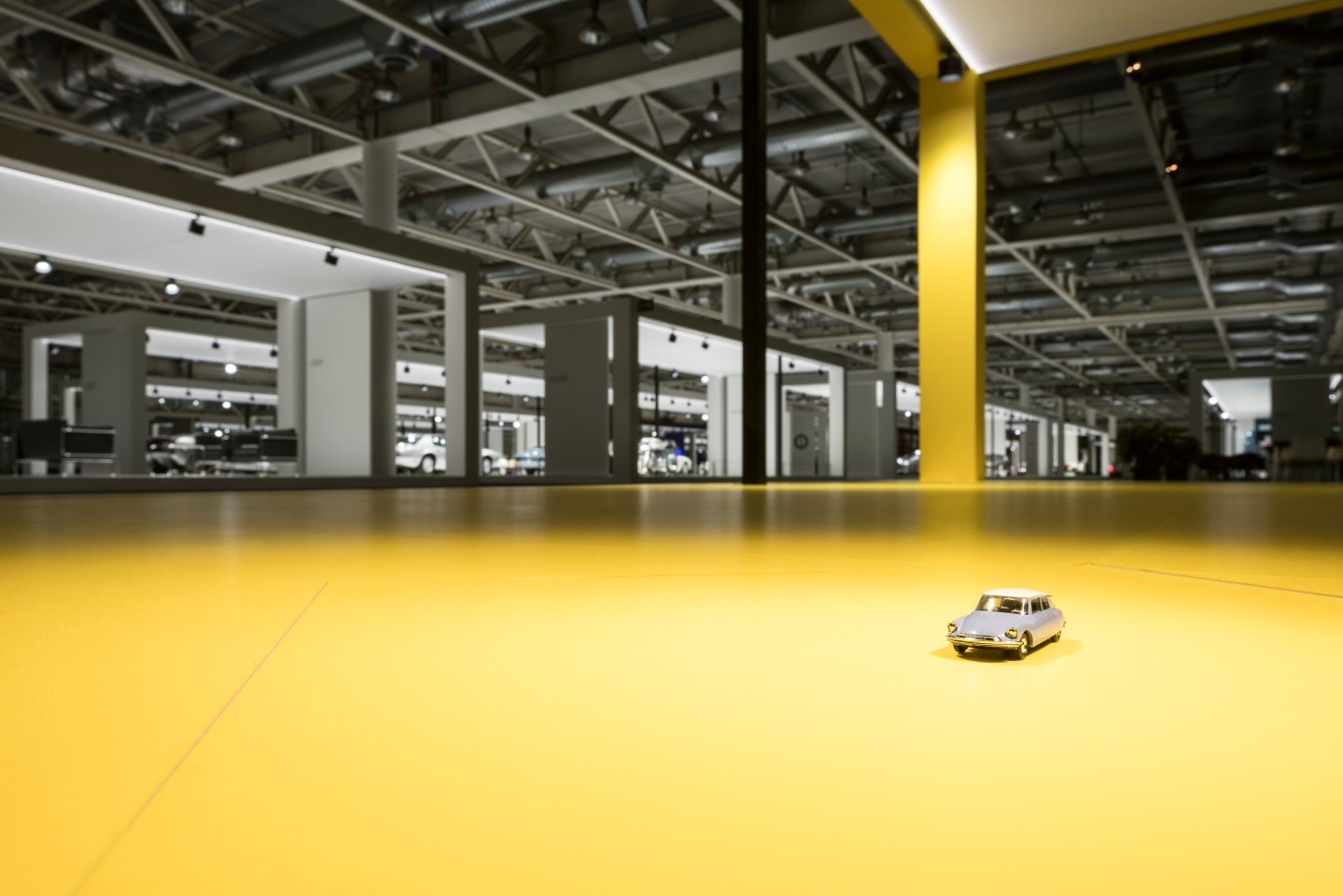 “Small things can be very powerful,” he explained. “Just think of diamonds and atoms, for example: you have to look very closely and to take some time to see them – they demand respect.

“When I was thinking of automobiles, I realized that the same could be true for small-scale models of the automobile. Many of these cars have stories to tell about their cultural impact, while others are simply beautifully elegant. 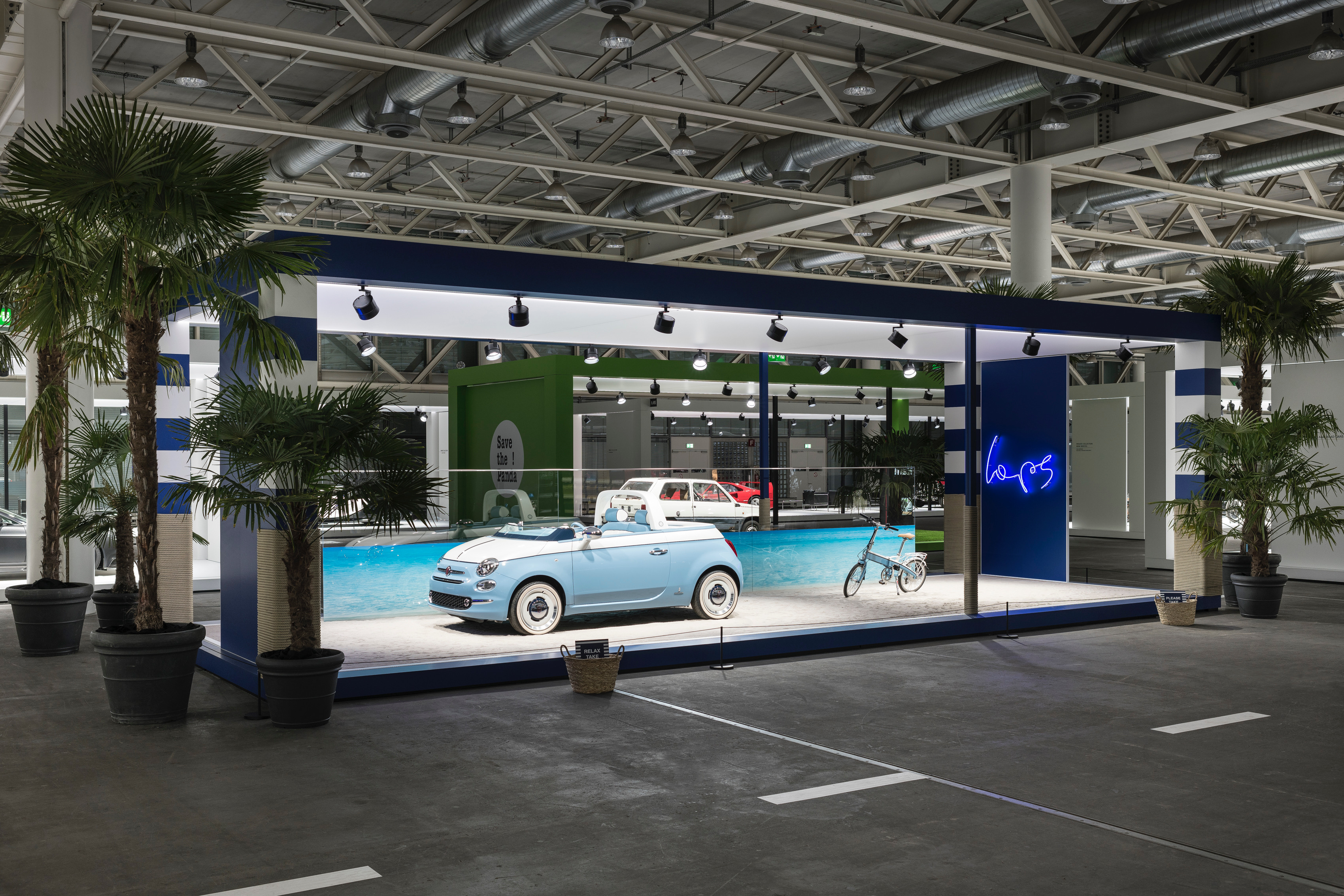 Lapo Elkann is the grandson of Gianni Agnelli, who rules over Fiat for many decades. Elkann founded several lifestyle companies, including Garage Italia.

The 2018 Fiat is a modern interpretation of a “beach chair” car, like his grandfather’s original, that can be carried on a yacht and then taken ashore for travel on the land, and was created to celebrate the 60th anniversary of the original, done for Agnelli by Carrozzeria Ghia.

The original had no roof or doors, wicker seating and a frame for an awning. Agnelli had many such cars done, many of them designed as chauffeur-driven limousines.

The Garage Italia update uses waterproofed leather seats and instead of a back seat, it has a built-in shower.

“Cars, design and art are among my greatest passions,” said Elkann. “Innovation and contamination between different worlds — past, present and future — excite my heart and my brain, and the new 500 Spiaggina is a great example of this and the perfect fit for Grand Basel. It evokes beauty, positive energy, colors and good vibrations. It embodies ‘La Dolce Vita’ in its 4.0 version.” 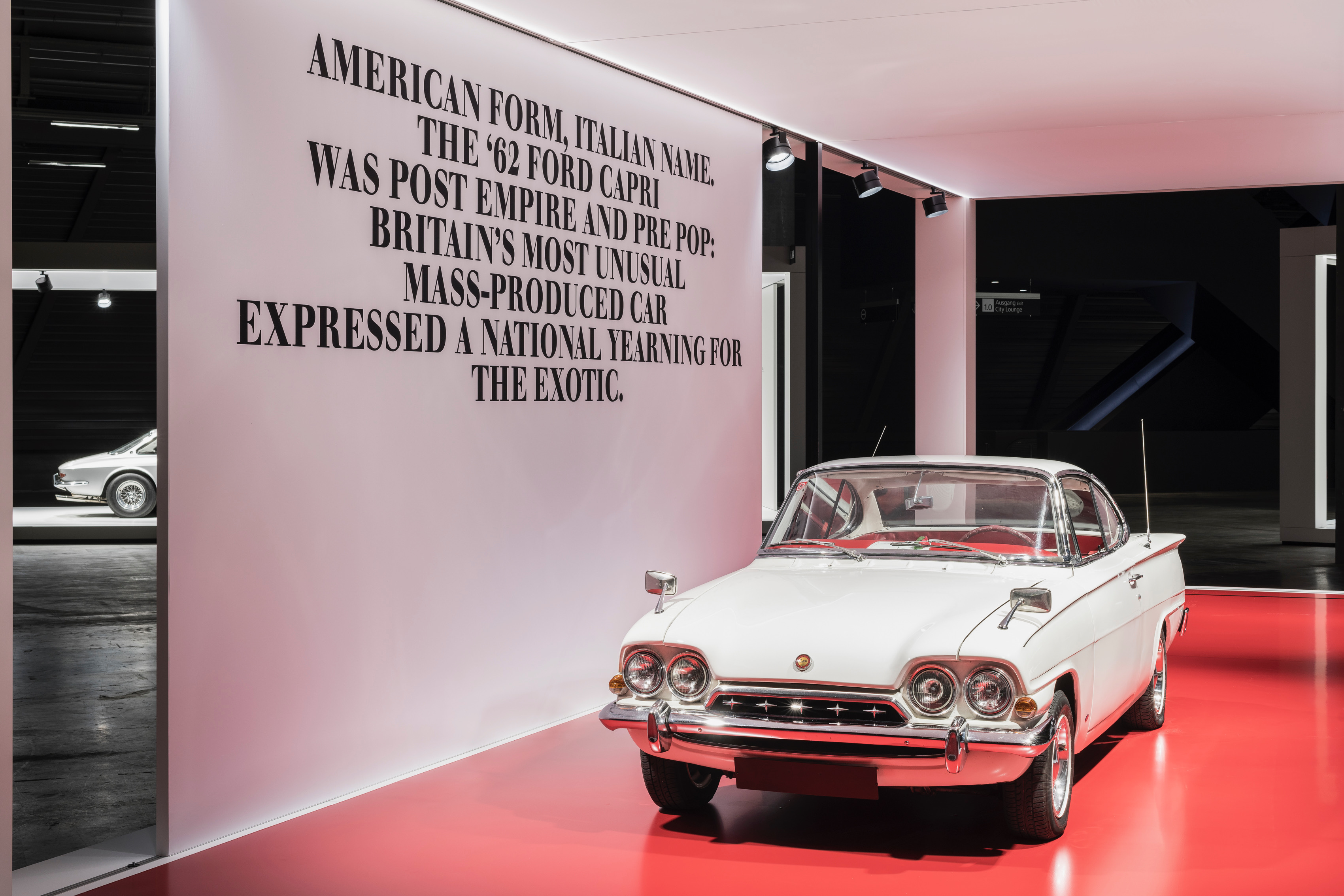 “To mis-quote Magritte, this is not a car,” said Bayley. “It is a dream. And this is the interpretation of dreams.

“The idea of what became the Ford Capri entered the mind of Ford of Britain’s designers in 1956, but as a slightly different car. This was an anguished year: the calamity of Suez marked the final end of the fading British Imperium. ‘Project Sunbird’ was established to give the designers something to dream about. And they dreamt about America. American prosperity offered an almost pornographic vista of possibilities.

“The result was one of the strangest mass-produced cars ever. Designer Colin Neale took styling cues from the Ford Galaxie, the Fairlane Skyliner and the Mercury Monterey. The huge rear deck is reminiscent of the ’61 Lincoln. Neale said the Capri was ‘sculpture in sheet metal.’ And its formal complexity made it ruinously expensive to manufacture.

“It was the first popular car to wear a ‘GT’ badge: the eighteenth century ‘Grand Tour’ having been the historical origins of Anglo-Continental voyeurism.

“And while there was nothing very much technically distinguished about the Capri, it was the first popular British car to use a Weber carburetor, establishing a vicarious connection to Ferrari and Maserati.

“Despite so much semantic promise, it was a sales calamity. A mere 19,421 were made. It is not only one of the strangest, but one of the rarest Fords. Dreams, you see, are soon dispersed.”