Corvette museum seeks car donations, and they’re not all Corvettes

The National Corvette Museum in Bowling Green, Kentucky, has shared its wish list, and while the cars it seeks primarily are, indeed, Chevrolet Corvettes, there’s much more to the story the museum wants to tell.

“Although one might think that the Museum only accepts Corvettes, that is not the case,” the museum says in its news release. “Currently the Museum is looking for several Corvettes for our collection, as well as other vehicles that have a significant tie to the Corvette story.”

What sort of other vehicles? Consider the following:

•  2004-2009 Cadillac XLR, “the only car produced in tandem with Corvette and the story of the Corvette platform turned Cadillac sports car.”

If you have any of the above and are interested in making a donation, you are asked to contact the museum curator, Derek Moore. For details, see the museum’s car donation webpage. 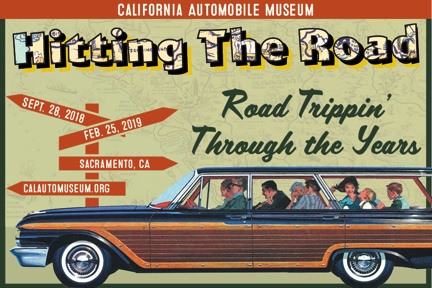 The California Automobile Museum in Sacramento also is looking for cars, but only for loans for an exhibit planned to open in late September and to run through late February 2019. The exhibit is “Hitting The Road: Road Tripping’ Through the Years.”

Vehicles being sought are a Model T KampKar or other conversion from the 1910 through 1929 era; a 1950 base model Ford, Chevrolet, Plymouth or Dodge; a late-1950s Ford Country Squire station wagon; a 1950s or ’60s Rambler, Nash or Kaiser Vagabond with folding seats; a classic “Canned Ham” trailer from the post-war era; a 1960s or ’70s Winnebago; a big 1970s Detroit station wagon, a 1970s-era VW Westfalia; a post-war touring motorcycle; a 1980s minivan.

If you have such a vehicle to loan, please contact the museum curator through the museum’s website.

The Newport Car Museum in Portsmouth, Rhode Island, will unveil its 2018 Ford GT at 2 p.m. on August 4. The car is the 109th of the supercars developed to celebrate the 50th anniversary of the first victory in the 24 Hours of Le Mans race by the Ford GT40.

It’s the inaugural “Pride of Our Rides” car show August 4 at the Simeone Foundation Automotive Museum in Philadelphia where museum volunteers, those who help with Demo Days and other museum programs, will stage a show of their own cars. The show is scheduled to run from 10 a.m. until 3 p.m.

“Cuba is one of a few places outside the United States with a robust American classic car culture,” the Trust’s vice chairman, David Madeira, notes in the news release. “The Central American theme will be complemented by authentic cuisine, music, beverages and – of course – cigars.”

The Seal Cove Auto Museum in Maine presents a watercolor workshop with artist Judy Taylor on August 8-9. The workshop will feature vintage antique auto advertising and will use a 1931 Franklin as a “live” model. To register, visit the museum website.

August 9 is “It’s Not All About the Cars” day at the Mullin Automotive Museum in Oxnard, California, where tours of the museum’s art collection will be featured.

The Newport Car Museum in Rhode Island will stage a “Hoods Up” weekend August 11-12.

Ed Garten, vice president of the Society of Automotive Historians and dean emeritus and professor at the University of Dayton will present “The Volkswagen Beetle: From Hitler to Hippie to Icon” at 1:30 p.m. on August 15 at the Studebaker National Museum in South Bend, Indiana.

America on Wheels museum in Allentown, Pennsylvania, will feature David Elick of Clearpathways in its lecture series at 11 a.m. August 18. The subject witll be “Upholster & Design.”

Not only will Vladimir Cetti be autographing copies of his book, Still Life With Tatra Wrecks, but what is being billed as “the largest gathering of Tatras ever in Burbank!” will be held August 18 from 10 a.m. until 2 p.m. at Autobooks-Aerobooks in Burbank, California.

The British Motor Museum stages its annual Buses Festival on August 19 with as many as 100 vintage and modern coaches on display. The day includes free bus rides to the museum from Lemington Spa Upper Parade and Train Station.

The Mercedes-Benz Museum in Germany will offer a summer program for children 8-12 years of age from August 21-31, Tuesdays through Fridays. An overall theme for the camps will be motorsports.

The LeMay Collections at Marymount in Tacoma, Washington, will stage its annual car show on August 25 with more than 1,500 vehicles available for viewing, along with antique dolls, pin cushions, radios and more. The Lucky Vehicle Auction Fall Classic begins that same day and runs through the 26th.

The National Corvette Museum celebrates its 24th anniversary August 30-September 1. The weekend includes the induction of Burt and John Greenwood, Tom Wallace and Mike Yager into the hall of fame.

Britain’s Beaulieu museum hosts its International Autojumble on September 1-2, with more than 2,000 vendors offering spare parts and assorted automobilia for sale (autojumble is the British version of a swap meet).

“Riverside Revisited” is the theme of a special tribute celebration of the historic racing circuit scheduled for September 8 at the Automobile Driving Museum in El Segundo, California, just south of the runways of LAX. During the event, mechanic, fabricator, car builder, crew chief and Indy racing team manager Jimmy Dilamarter will receive the Peter Bryant Challenger Award for Excellence in Engineering.

More than 400 classic (as early as 1970) and modern trucks of all categories are expected for the Retro Truck Show to be held September 8-9 at the British Motor Museum.

An IMSA race and the Corvette Racing banquet take place September 8-9 at Laguna Seca and the National Corvette Museum’s Museum In Motion will launch a tour of Northern California on September 10 through the 16th with travel on the Pacific Coast Highway, visits to car collections and other points of interest.

America on Wheels museum in Allentown, Pennsylvania, has rescheduled its Classics and Cruisers on Hamilton car show for the afternoon of September 15.

The Kansas City Auto Museum will be among the participants in the American Royal BBQ Car Show, scheduled for September 15 at Kansas Speedway.

The Beaulieu museum in England launches its annual Autumn Lecture Series on September 15 with Steve Fenwick of Renault Sport Racing discussing “F1 Cars: An Engineering Challenge.” On October 12, it’s Steve Waddingham, historian at Aston Martin Lagonda, talking about “Aston Martin: A History.” November 12, Petere Williams will discuss his motorcycle racing career. On December 8, Chris Keith Lucas, managing director for Jaguar specialist Lynx, will present “If I had known then what I know now.”