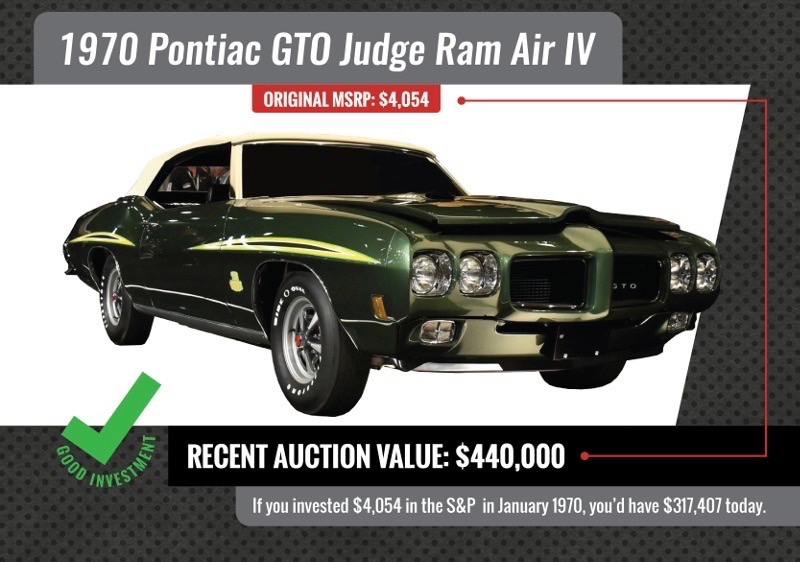 So, do you come out ahead if you buy a future classic or simply put your money into the Standard & Poor’s 500 Index funds?

Obviously, you get to drive your car, but what happens when it comes time to sell. Have you made money while enjoying the drive?

The folks at Kwik-Lift decided to do the math, selecting five vehicles sold at the Barrett-Jackson auction in Scottsdale earlier this year.

“There’s always someone who thinks restoring a car is wasted money, so we tried this little experiment to prove the value of the classic car hobby,” Jason Peters, director of Kwik-Lift, was quoted in the company’s news release. “Whether or not it actually proves our point, having the conversation and creating this chart was a lot of fun.”

Vehicles from 1968 through 2015 were selected. Manufacturer’s suggested retail price was used as the investment cost. That amount was then calculated as though it were an investment made in the S&P on January 1 of the car’s model year. Actual auction price achieved was then compared to what the S&P investment’s value would have been as of March 31, 2018.

However, Kwik-Lift noted, “These calculations do not account for vehicle maintenance nor insurance costs for the cars. The calculations for the stocks do not include taxes.”

Peters added: “Every car on the chart looks like a good investment to me.

“I couldn’t believe the ’69 Camaro brought in returns more than 50 percent higher than the S&P. This graphic is a handy illustration for anyone who needs to convince their significant other that buying a classic car is a good idea.”

Kwik-Lift was Danny Johnson’s idea back in 1996 after he found himself pinned beneath his street rod.

“Determined to find a safer alternative to jack stands, he started designing the Kwik-Lift,” the company notes in its news release. “Built in the USA and designed to fit in most home garages, the Kwik-Lift is the strong, affordable car-lift solution for safety and convenience.

“It offers adjustable length and width and handles vehicles up to 5,000 pounds. The company’s product offering has grown to include two-post, four-post, mid-rise, alignment racks, and many other types of lifts.”