RM Sotheby’s, which already had listed a Ferrari 250 GTO and a Ford GT40 with Le Mans history on the docket for its annual Monterey auction, announces the addition to the sale of the 1963 Aston Martin DP215 Grand Touring Competition prototype.

“By no means a converted road car, this was the ultimate evolution of Aston Martin’s racing program, and the last of the four completely one-off ‘Development Project’ cars, with its sights set squarely on the famed 24 Hours of Le Mans just two months away,” the auction house said in its news release.

RM Sotheby’s expects the car to sell for $20 million to $25 million. It is scheduled to cross the block on August 24.

“DP215 was the pinnacle achievement for Aston Martin’s racing program, approved by David Brown in March 1963, ordered directly by John Wyer, designed by chief engineer Ted Cutting and fitted with an engine by Tadek Marek as the final racing car built by the factory in the Brown era,” RM Sotheby’s added.

“Ultra-lightweight, with a four-liter version of the DP212 engine set farther back in the chassis and cutting-edge wind-tunnel-tested aerodynamics, the car was piloted by American ace driver Phil Hill, a three-time Le Mans-winner and the first ever American Formula 1 World Champion, paired with Belgian Grand Prix and endurance-racing veteran Lucien Bianchi.

“What the pair achieved is almost unfathomable, clocking a staggering 198.6 mph along the famed Mulsanne Straight—becoming the first car to officially break the 300 kph barrier at Le Mans.”

After its competitive career, RM Sotheby’s noted, the car had had a documented chain of owners, with Cutting being called in to consult on and to approve the car’s authenticity in the restoration process.

In the restoration process, the car was reunited with its original 400/215/1 engine, the powerplant that propelled Hill at LeMans.

The car is being consigned by its current owners, Neil and Nigel Corner, known for their vintage racing experience. 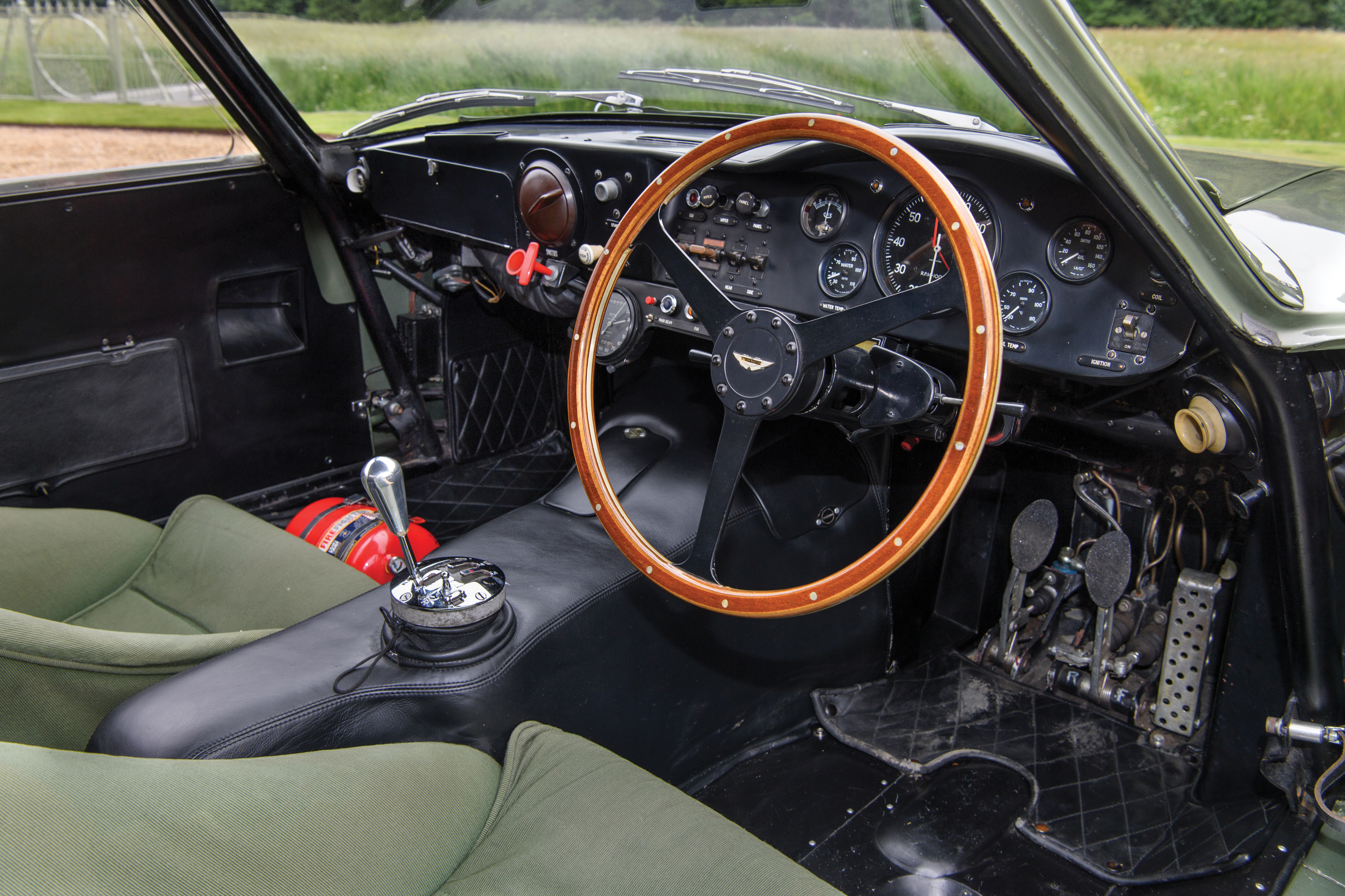 “Ted Cutting designed these project cars and has fully blessed DP215’s restoration,” Neil Corner told RM Sotheby’s. “I will always remember when I asked him what his proudest achievement was during his magnificent career with Aston Martin and he replied that DP215’s design and its recorded speed at Le Mans eclipsed even his pride in winning the World Sports Car Championship in 1959 with the DBR1s. This was the fastest speed ever recorded by a front engine car on the old course at Le Mans.

“The lines of the car are absolute perfection,” he continued. “You can see where its outstanding maximum speed came from.

“What’s more, its performance cannot be overemphasized – from a driving point of view, the acceleration in second and third gears always caused the hairs on the back of my hand to stand up. The car feels like a thoroughbred to drive – the steering is delightfully light, the brakes are outstanding for the era, and there’s nothing quite like the bark of its incredible exhaust note. 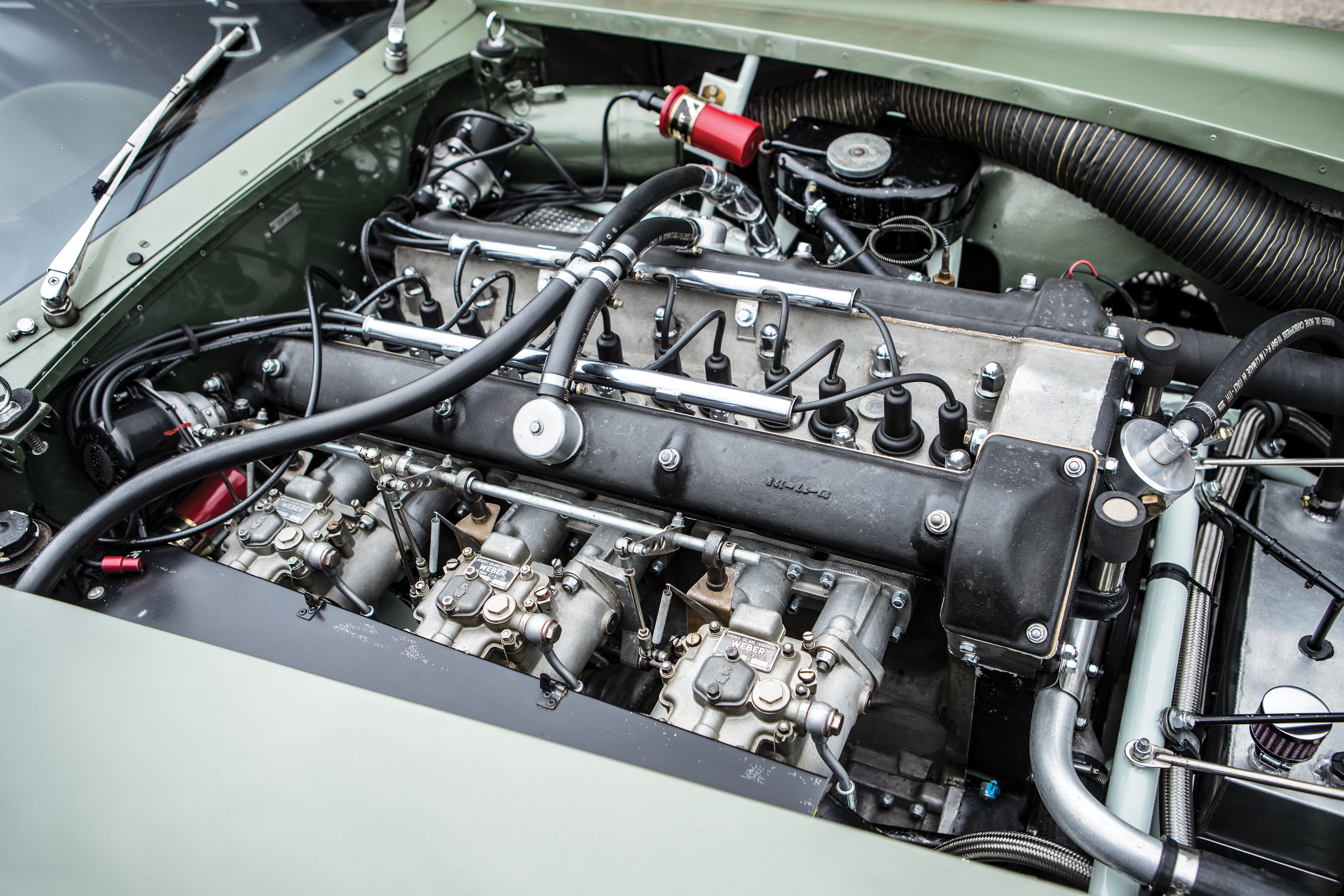 “I’ve driven DP215 everywhere, from rush hour traffic in the busy streets of Paris to full speed on some of the world’s greatest circuits, and I can attest that its performance is unbelievable on road or track. I hope that DP215’s next custodian drives and enjoys the car as much as I have.”

Alain Squindo, RM Sotheby’s chief operating officer, noted that, “The DP cars are completely one-off competition projects and are essentially on their own level when it comes to Aston Martin racing royalty. DP215 is the pinnacle of the Works team’s racing development, and the new owner will acquire a car that is not only extraordinarily special but also more capable of running at the front of the pack than virtually any other racing car on the market.”

The car figures to continue RM Sotheby’s string of record-setting Aston Martins sold at Monterey.  Last year the $22.55 million price paid for the 1956 Aston Martin DBR1/1 at Monterey was a record of any British car at a public sale.

RM Sotheby’s auction is scheduled for August 24-25 at the Monterey Conference Center in downtown Monterey. The auction house notes that with the 250 GT and Ford GT40, the gold-colored car that was part of the famed three-Ford victory photo, the Monterey docket represents “the pinnacle of racing performance for each of these legendary marques form the golden age of motorsport.”