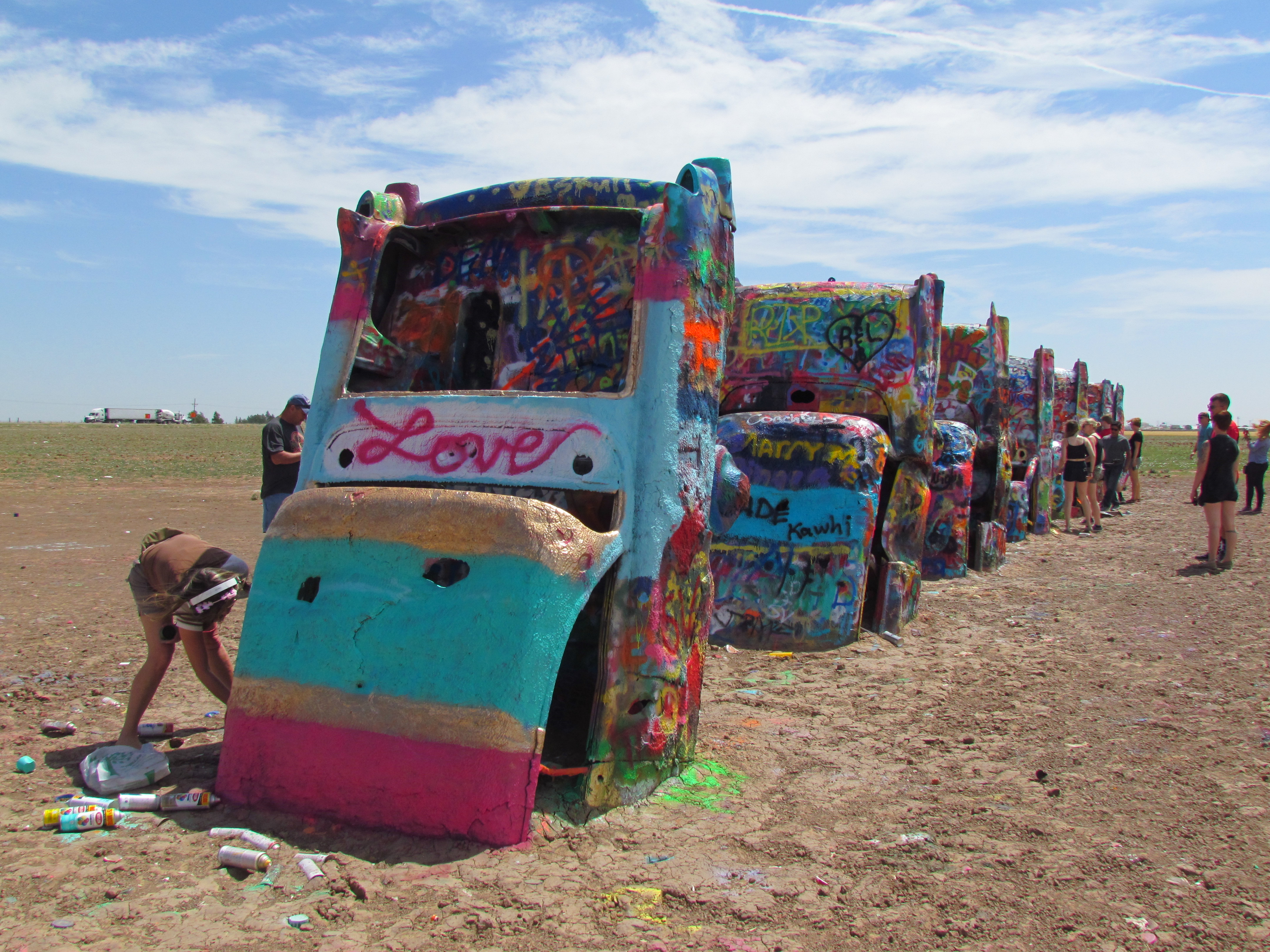 It would be easy to simply drive past Cadillac Ranch. In fact, if you didn’t see a bunch of cars parked along the frontage road south of Interstate 40 just west of Amarillo in the Texas Panhandle, you likely wouldn’t even notice the vintage Cadillacs, their noses buried in the farm field as you sped by at 75 miles per hour.

There are no billboards proclaiming the site, perhaps because there’s no admission fee, nor any other facilities for that matter. There’s just a cow-stopping gate you negotiate before walking 100 or so yards south toward an ever-changing,  open-air and open-to-the-public art installation (though there must be some sort of “friends of Cadillac Ranch” group that stops by every so often to gather up the emptied spray paint cans visitors leave behind after adding yet another layer of color to the cars; and a few years ago, when someone vandalized one of the cars, someone else welded on a new roof panel).

So it should be easy to simply drive past Cadillac Ranch. But I’ve never been able to do so, not even when visiting meant ruining a pair of shoes because it had been raining and the farm field was awash in thick, mucky mud.

But what’s a pair of shoes compared to visiting Cadillac Ranch?

Since moving to Phoenix at the end of 1999, I’ve driven I-40 through Amarillo many times, and each time I’ve been drawn to, compelled to stop, to view the shells of the vintage vehicles and the latest application of colorful graffiti.

I had company on my most recent visit. My 8-year-old granddaughter was riding along to visit her cousins (and aunt and uncle) in Michigan. She noticed that while you can see the cars out in the field, their tailfins pointed toward the Texas sky, what you first sense is the smell of fresh paint, and then comes the sound of the rattling of the BBs in the paint cans bring shaken by the people already surrounding the cars.

By the way, you don’t have to bring your own paint, there are always plenty of cans strewn on the ground, discarded but still containing plenty of colorful liquid.

“Don’t you want to paint?” Miss Vanessa asked me as she completed a heart shape on one of the cars.

“That doesn’t mean you can’t,” she responded, expressing wisdom beyond her 8 years.

While I’ve never been able to simply drive past the installation, and while I enjoy seeing the “artistry” of others, I’ve never added to the color of the cars. Nor am I ever likely to do so.

I’m not quite sure why, though I think I’d feel as though I was ruining someone’s artwork rather than creating my own. I’d rather capture photographs of the kaleidoscopic colors; I’ve had several such images blown up on canvas prints I’ve used as artwork in my home.

I did notice what I appears to be relatively new phenomena at Cadillac Ranch this visit: People not only painting the cars, but also leaving their marks as words on the hard-packed ground leading to and around the cars. A contemporary version of “Kilroy Was Here,” or perhaps a way of signing their automotive artwork?

The other difference this visit: As we returned to my truck through the cow-catcher gate, a young man handed me a flier advertising Cadillac Ranch souvenirs available at the nearby Cadillac RV Park, where several vintage Caddys are parked on wedges of concrete, though not at the same angle as those in the Ranch.

Cadillac Ranch was installed in the mid-1970s as an artistic commentary on American culture. It is located adjacent to the interstate highway that obliterated historic Route 66, the beloved American Mother Road. Originally, the ranch was installed a few miles to the east, but just as the interstate crowded out Route 66, Amarillo urban sprawl led to the cars being replanted in the current location in 1997.

The cars — 10 Cadillacs ranging from a 1949 Club Coupe to a 1963 sedan — were collected by the late Stanley Marsh 3 — rancher, oil and helium tycoon, media mogul, art patron and “merry prankster” — who commissioned the installation by the Ant Farm, a San Francisco-based group of architects/touring performance artists. The cars are positioned in precise order, tail fins pointing skyward at the same angle as the sides of Egypt’s Cheops Pyramid.

But this isn’t Egypt. It is the Texas Panhandle. And they are Cadillacs. And anyone can stop by (use either Exit 60 or 62A) and leave your mark on the cars. Well, at least until someone else arrives and leaves their mark over yours.