Ever wonder when race cars first wore a sponsor’s name across their flanks? While not unusual in the United States, in Europe the first single-seater to declare a non-racing commercial benefactor’s name was the “Eldorado” Maserati, driven June 29, 1958, at Monza by Stirling Moss.

Maserati announced the 60th anniversary of that event, which in many ways launched the modern era of global motorsports, this weekend.

“Some cars have gone down in history for legendary wins, for the innovations they introduced or for the drivers who piloted them to glory,” the company said in its news release. “Others, meanwhile, have become veritable icons for what they represented: a unique story, a turning point in history, a social phenomenon, an event that rippled beyond the stands of the race track to ultimately define an era.

“One such case was the Maserati ‘Eldorado,’ which became famous in 1958 as the first single-seater car in Europe to be sponsored by a brand not linked to the world of motorsport. The brand in question was Eldorado, an ice-cream manufacturer. This was the first example of modern sponsorship, where the car was painted in the colors of the partner company, abandoning the traditional color assigned to each country by the Fédération Internationale de l’Automobile (FIA).

“This was a real revolution for the day, of vital importance to the future of motorsport, which from that moment on opened its doors to new financial backers.”

Gino Zanetti, owner of the Eldorado ice cream company, commissioned the car to promote his brand on an international basis in the Trofeo dei due Mondi, the famed Race of Two Worlds that pitted cars and drivers from Europe against those from the Indianapolis 500.

“The name Eldorado was emblazoned in bold black lettering along the sides of the car, with two additional smaller logos on the nose and below the small deflector that acted as a windshield,” Maserati noted.

“The logo with the face of the smiling cowboy was positioned in the center of the nose and on the sides of the rear fin. Below the two Eldorado brands on the sides, in bright racing red was ‘Italia,’ denoting the nationality of the sponsor as well as that of the racing car manufacturer.

Maserati had won the Formula 1 world championship in 1957 with Juan Manuel Fangio, but then withdrew from factory racing to build cars for customers.

“This was precisely the ideal situation that Zanetti was seeking, and the reason why the Italian entrepreneur turned to Maserati,” the auto maker said in its anniversary news release.

The engine, derived from the 450S twin-cam V8, had its displacement reduced to 4,190cc, generated 410 hp at 8,000 rpm, and like the 2-speed transmission, was offset to the left by 9 centimeters for better weight distribution in the “Monzanapolis” race, run counter-clockwise around the high-banked Monza corners.

The chassis was enlarged and also reinforced in hopes of withstanding the mechanical stress of the concrete racing surface. To help reduce weight, Halibrand magnesium wheels were used. The aluminum bodywork included a vertical fin behind the cockpit.

Maserati noted that the race was held in three heats, a strategy “aimed at enticing European car manufacturers to enter their own cars, which had not originally been designed to compete in such a long race, and one that was so mechanically arduous.”

Moss finished fourth in the first heat, fifth in the second, but his steering system broke in the third and the car struck the guard rail, leaving the Eldorado seventh in the final accounting.

“He walked away unscathed from the crash and, all things considered, the ‘Eldorado’ too suffered only limited damage, proving the value of its solid structure,” Maserati noted.

“Based on the findings from the race, the ‘Eldorado’ was modified by the Gentilini bodywork shop, which removed the rear fin and reduced the hood scoop, after which the car was entered in the Indianapolis 500 in 1959.”

At Indy, the car wore red, the Italian racing color, but also the Eldorado name and cowboy logo. However, it did not make it into the 33-car field.

“The inexperience of the gentleman-driver, Ralph Liguori, meant that the car failed to qualify, as it set the 36th fastest time, with only the first 33 qualifying,” Maserati said. “With a professional driver behind the wheel, it would have been a very different result.”

The Maserati ‘Eldorado’ has been restored to its original livery and is part of the Panini Collection in Modena, Italy. 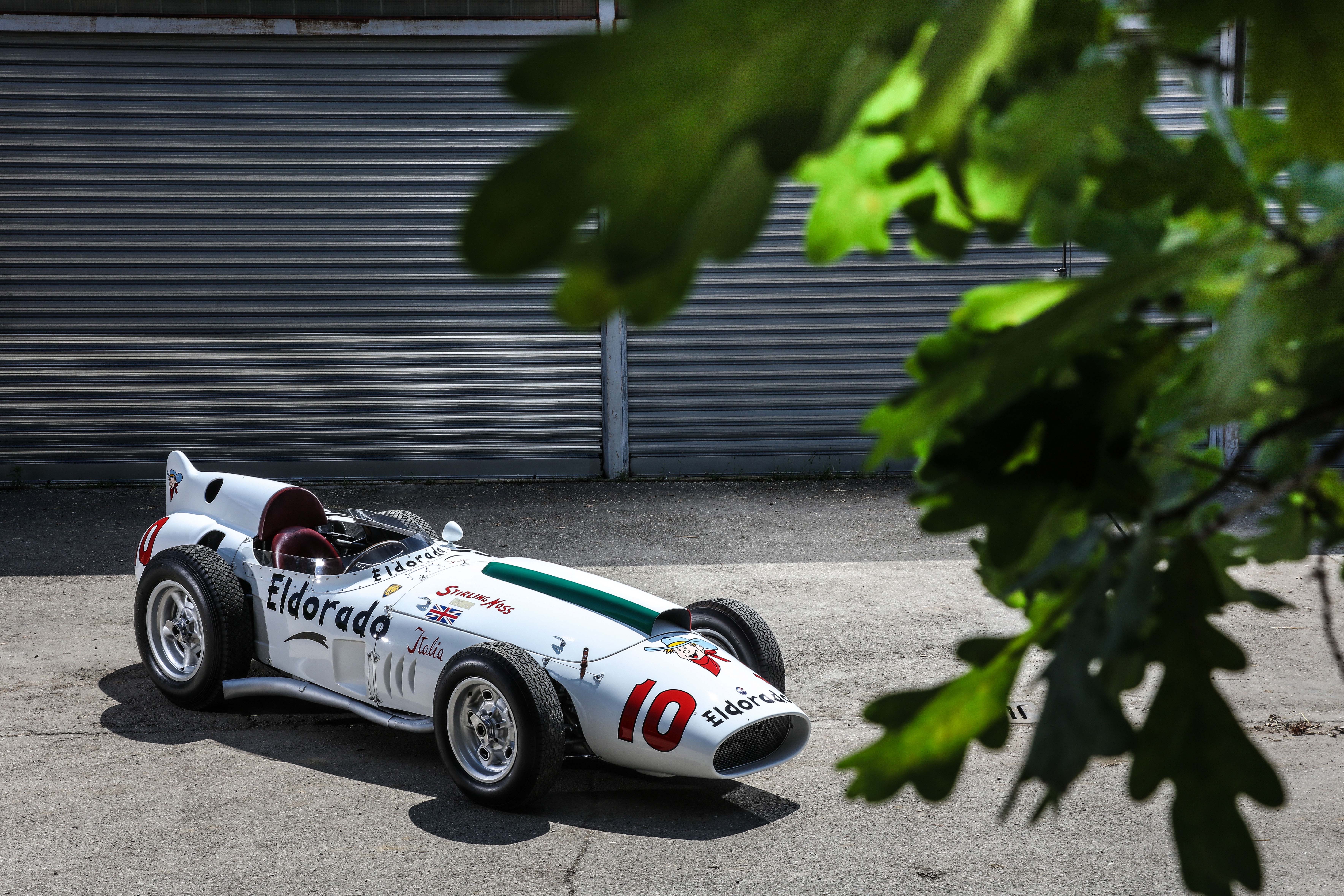