Shelby Daytona Coupe reborn, and even Peter Brock says these are faithful reproductions

Back in the mid-1960s, and despite strong opposition from others in the race shop – including legendary car builder Phil Remington – Peter Brock and Ken Miles finally convinced Carroll Shelby to allow them to turn Brock’s designs for a racing coupe version of the Cobra roadster into a real car.

The internal battle was so intense that to help him decide, Shelby brought in a friend, famed aviator and aerodynamics engineer Benny Howard. After hearing Brock’s proposals, Howard declared the design wouldn’t work, the car wouldn’t be fast enough.

After Howard went home, Brock and Shelby were alone in the shop. Brock made one more appeal, brashly claiming that while Howard may know a lot about airplanes, he didn’t know anything about race cars.

“You better be right,” Shelby declared, his way of granting approval for the project.

Brock was right. On its first test run, the car was more than three seconds per lap faster than the roadster. The car, which would become forever known as the Shelby Daytona Coupe, would go on to beat Ferrari, and everyone else, at a variety of venues, including the 24 Hours of Le Mans.

Six examples were produced. Today, they are worth upwards of $20 million each, too much for the wealthiest of their owners to risk them in vintage racing events.

But people, including vintage racing event organizers and motorsports fans around the globe, clamor to see the famed cars back on the track. In 2015, Britain’s Lord March paid for the transport from all corners of the globe all six cars to showcase them —together for the first time — at the Goodwood Revival.

Among those eager to see the cars in competition, the FIA, governing body of international motorsports, has declared some Daytona Coupe re-creations eligible for historic racing competition.

Brock has seen those cars, and others (he owns a street-legal Superformance version that he’s driven some 60,000 miles). He’s often approached by people interested in such projects. He’s even been impressed by a couple of the cars, but perhaps none more than the newest example, which was just unveiled at the Nurburgring in Germany.

Heading this new project is Mikael Tarne, co-owner of an audio equipment manufacturing company and Danish racing enthusiast who became fascinated by the historical details of the Daytona Coupe, to the point that he noticed variations in the six cars and contacted Brock to learn more. 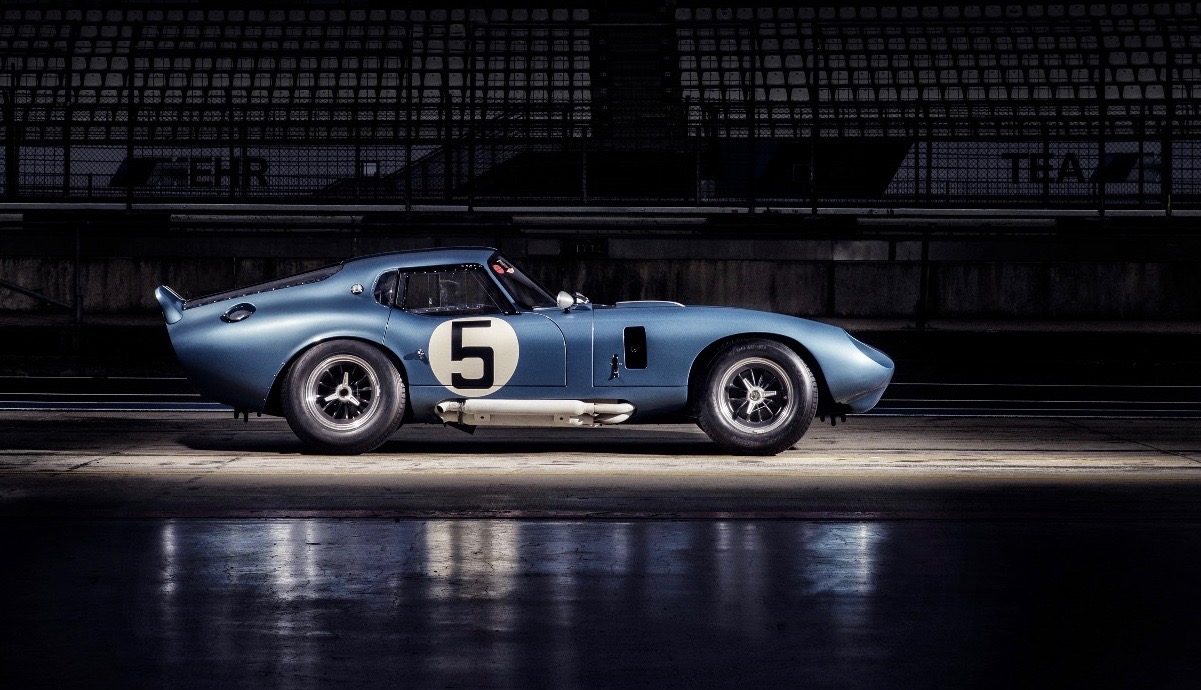 Part of that difference, Brock explained, was that only the original car was built at Shelby facilities in California. Due to the pressures of the racing calendar, the others were done in Italy, at Carrozzeria Gransport. But Brock had done his designs in inches and the Italians were used to metric measurements. Rather than consulting Brock, “They thought they were doing us a favor,” Brock said, as they not only did their own conversions, but also made some changes to the cars’ rooflines.

Unable to buy one of the original six Daytona Coupes, Tarne’s mission was to re-create one, but which one?

Tarne was so determined that Brock was impressed enough to lend a hand, taking some time from his racing-car trailer business, Aerovault (which just added a second, taller model to its lineup).

Tarne convinced two of the owners of original Daytona Coupes — the Miller family in Utah, which owns the Italian-built Le Mans winner, and the Simeone Foundation Automotive Museum in Philadelphia, which has the original California-built car. He also secured a German specialist, American Muscle Motorsports & Services, to do the builds true to original Shelby racing specifications, including aluminum bodywork and the 289cid Ford V8 engines, the only powerplant permitted by the FIA for international vintage racing by Daytona Coupes.

Buyers of the cars, expected to cost between $400,000 and $450,000 each, can choose between the two models. The cars will be eligible only for vintage racing, not for street use.

The first car completed is a faithful reproduction of the Le Mans-winner (2299), Brock said. The re-creation of the original California-built car is in progress in the German workshop.

Classic cars made in Ireland: DeLorean is only tip of Irish iceberg

Video of the Day: The Daytona Coupe Story with Peter Brock