VW electrifies Pikes Peak, and provides a peek at our automotive future

A century or so ago, fledgling motorcar producers in Europe and North America used racing to prove the quality and durability of their products to potential but skeptical customers.

Today, we’re seeing the same scenario played out again, but this time it’s not a transportation revolution that’s being proven but a technological one. If our automotive future is, indeed, to be electrified, the early proof of the proposition is being played out and displayed on racing circuits.

For example, there are the hybrid cars racing at Le Mans, the Formula E circuit that may be a preview of the future of open-wheel racing — whether on road courses or the Indy oval — and this past weekend, an electric car set the all-time record for the race up Pikes Peak.

They’re been racing up Mr. Pike’s Peak since 1916. This past weekend, driving the Volkswagen I.D. R Pikes Peak racer, Romain Dumas reached the summit in 7 minutes, 57.148 seconds, breaking by 16 seconds the previous record by 16 — Sixteen! — seconds.

By the way, the record wasn’t just for an electric car, but for any four-wheel conveyance, including those driven by the likes of Sébastien Loeb (who held the previous record), the Unser family, Rod and Rhys Millen, Nobuhiro Tajima, Michele Mouton, Walter Rohrl and other motorsports stars.

“The I.D. R Pikes Peak is the sporty forerunner of Volkswagen’s I.D. family,” Frank Welsch, a VW board member in charge of technical development, was quoted in a post-climb news release.

“With a combination of outstanding engineering skills, passion and commitment, the team has managed to create a fantastic racing car in just eight months.”

The record, he added, “speaks volumes for electric mobility.”

The achievement was Dumas’ fourth overall victory on the Colorado mountain.

The purpose-built I.D. R racing car weighs less than 2,425 pounds and is powered by a 500 kW (680 horsepower) electric powertrain. Unlike vehicles that burn petroleum, the electric motors presumably are not slowed by the thinning atmosphere and lack of oxygen as the road climbs to the clouds.

However, as VW noted, “the key was to compensate for the loss of downforce caused by the thin air on Pikes Peak,” and thus the car’s streamlined design and very large rear wing.

And there was a specific challenge facing electrified entrants:

“Volkswagen also struck out in a new direction when it came to charging technology – the goal being to charge the car as quickly as possible with minimum environmental impact,” the automaker reported.

“The time was defined by the regulations: In case of the race being suspended, it must be possible to completely charge the car in under 20 minutes.

“The electricity required was provided by generators at the foot of Pikes Peak. Glycerol, which in chemical terms is a sugar alcohol, was selected as the fuel. A by-product of the manufacture of biodiesel, for example, Glycerol combusts with virtually no harmful exhaust fumes or residues. Glycerol itself is non-toxic and is even permitted as an additive in the food and cosmetics industries.”

The road runs just short of 12.5 miles with car and driver encountering 156 corners, often hairpins and, should you miss one of those corners, it’s a long way down before you stop.

“Awesome!” declared Dumas. “We exceeded even our own high expectations with that result.”

After testing on the mountain in the week before the race, he said, “we have known that it was possible to break the all-time record. For it to come off, everything had to come together perfectly – from the technology to the driver. And the weather had to play ball, too. That everything ran so smoothly is an incredible feeling, and the new record on Pikes Peak is the icing on the cake.”

Well, there was that fog in the middle section of the course, right Romain?

“I had some fog in the second section and that made the turns very slippery,” he said. “I didn’t want to take too many risks and lost a few seconds there. Thankfully, the sun came back out in the third sector and I was able to go on the attack again.

“The I.D. R Pikes Peak is the most impressive car I have ever driven in competition,” added the French racer and Porsche factory driver who was in winning cars at Le Mans in 2010 and 2016. Dumas also raced for Roger Penske in prototype sports cars.

“The electric drivetrain means that many things are different and I learned a lot during the project. The team did an indescribably meticulous, yet at the same time relaxed, job. Not only did we get the desired result, but the team spirit was also spot on. I am incredibly proud to have been a part of it.” 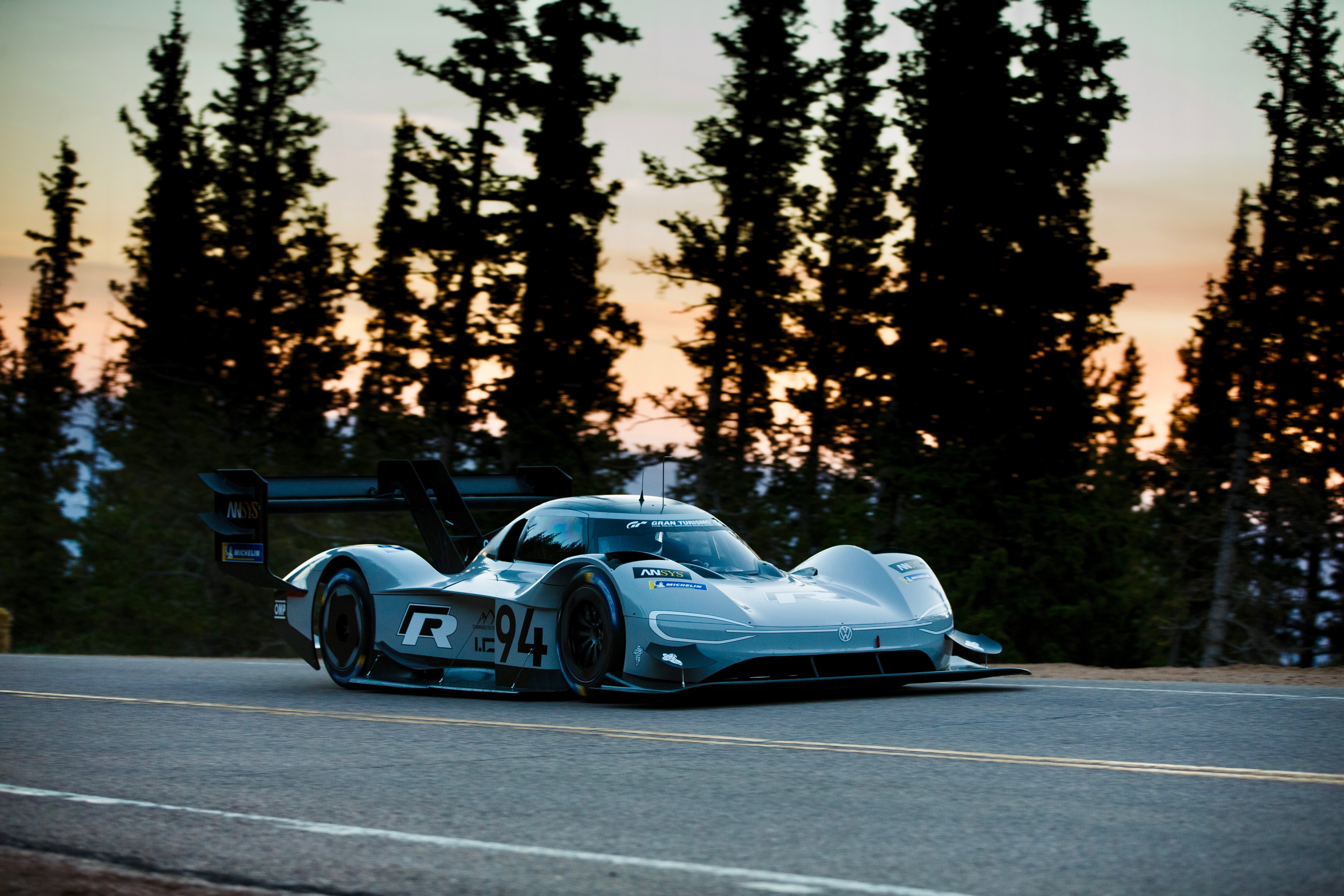 PS: European automakers love Pikes Peak. Audi and Peugeot have done major programs based on winning the Climb to the Clouds. Bentley was on hand last weekend to set the Production SUV record with its new Bentayga. With Rhys Millen at the wheel, the 12-cylinder SUV made it to the top in 10 minutes, 49.9 seconds. Acura also has recent history with the hill climb and had the fastest production-based car (TLX GT),  got the hybrid record (NSX) and front-wheel drive record (TLX A-Spec).

European motorcycle manufacturers also are entranced by the challenge. Carlin Dunne rode a Ducati to victory in the motorcycle class in 9:59.102 for his fourth victory in that division. In 2012, Dunne was the first two-wheeler to reach the summit in less than 10 minutes.

PPS: Volkswagen of America has announced plans to enter the Southern California Timing Association’s speed runs August 11-17 on the Bonneville Salt Flats with a 2019 Jetta will be powered by a modified 2.0-liter turbocharged four-cylinder engine. VWoA’s target: To break the BGC/G-class record of 208.472 mph.

Another retro EV emerges from UK