In the past couple of days, we’ve reported on the collector car museums in Buffalo and Norwich, New York. The museums have more in common than just their upstate NY addresses. Both will be visited later this month by The Great Race, a competition for classic cars and their drivers and navigators presented by Hemings Motor News and Hagerty.

In fact, the event, now in its 36th year, will start June 23 at the Buffalo Transportation Pierce-Arrow Museum, and the lunch stop the following day is the Northeast Classic Car Museum in Norwich.

Later on the route, the traveling classic car show will visit two other museums we’ve featured, the Owls Head and Seal Cove collections in Maine.

In between, the route includes a visit to Cooperstown, home of the National Baseball Hall of Fame, and the Mt. Washington Auto Road, historic venue for racing to the clouds. The tour also will visit Hemming’s headquarters in Bennington, Vermont.

The tour enters Canada on June 29 and ends July 1 in Halifax, Nova Scotia.

For those planning ahead, organizers have announced the route for 2019, when The Great Race will start in Riverside, California, and conclude in Tacoma, Washington. The 2019 event marks the first time the rally will start and finish on the West Coast.

The Auburn Cord Duesenberg Museum in northeast Indiana has received a matching grant challenge for $420,000 from the Jeffris Family Foundation of Janesville, Wisconsin, monies to be used to repair and restore the historic Auburn Automobile Company showroom that serves as the museum’s main-floor gallery space. The showroom is listed on the National Register of Historic Places. The grant is a 2-to-1 match provided the museum raises enough money within the next three years for the project to begin.

The Beaulieu, Britain’s National Motor Museum, enjoyed a record turnout of 1,620 cars for its recent “Simply Porsche” gathering; that was more than 600 additional Porsches compared with the 2017 event.

The People’s Choice Award went to Matt Gough, who has owned his Riviera Blue 2010 Boxster for only a year. Runners-up were Niel Richardson for his 2004 Porsche 966 Turbo convertible and Jon Devereux for the 1952 Porsche 356 cabriolet that he restored. 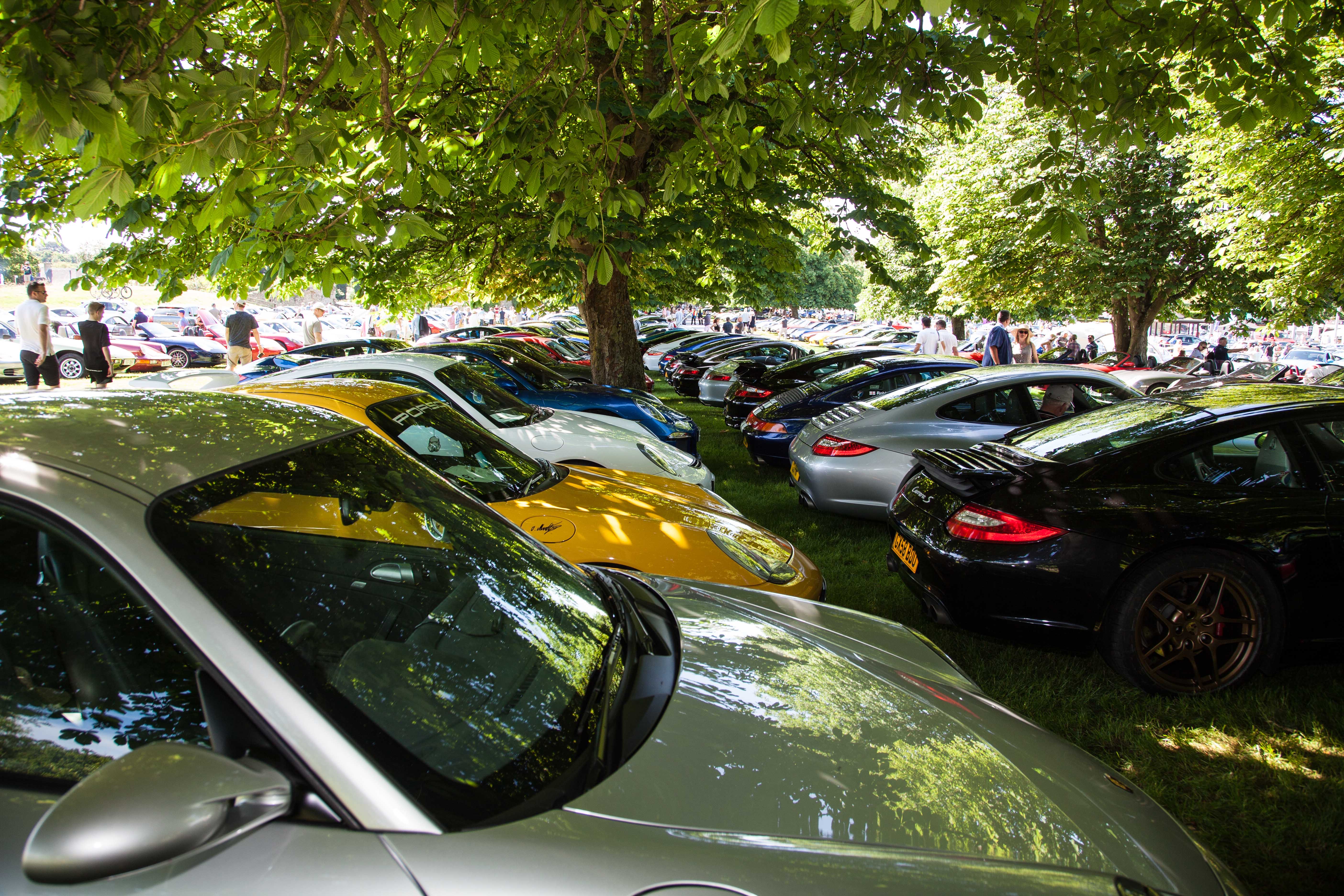 Registration for the caravan doesn’t open until this September, but planning is underway. The 2014 event involved more than 3,000 Corvettes joining caravans from various parts of the country and all arriving at the museum in Bowling Green, Kentucky, for its annual anniversary weekend.

For more information, including the caravan program from your area, see the Caravan website.

The Porsche 917 was proclaimed the inaugural Racing Car Award winner and Bruce McLaren’s daughter was presented with her late father’s Inspiration Award at the recent Motor Sports Hall of Fame Awards ceremony in England.

The Cosworth DFW engine that transformed Grand Prix racing for more than a dozen years was proclaimed winner of the Formula 1 Award at ceremonies where the new Alpine A110 was announced as the Road Car award winner.

The California Ag Museum in Woodland stages its Tractors & Brews event on June 7 from 6 until 9 p.m. On June 12, it will benefit from the sale of several vintage-style tour buses being offered at the Ritchie Bros. auction in Dunnigan, California.

The Simeone Foundation Automotive Museum in Philadelphia plans a special 10th anniversary celebration for June 8. Admission to the museum will be free, and the museum will remain open until 7 p.m. There also will be opportunities to ride in one of the museum’s historic sports cars. Then, on June 9, the museum will offer a Demo Day program — Ford Vs. Chevy — with a 1966 Corvette 427 Stingray, 1963 Corvette Grand Sport, 1964 Cobra Daytona Coupe and other cars being exercised in the museum parking lot.

On June 9, the Newport Car Museum in Rhode Island opens its newest gallery, American Muscle “Then and Now,” which will showcase such cars as a 1961 Chevrolet Impala SS 409 convertible, 1965 Ford Mustang convertible, 1964 Pontiac GTO, a pair of 1969 Chevrolet Camaro Z/28s, 1970 Dodge Hemi Challenger and others. The museum also is adding vehicles to some of its other galleries.

The Seal Cove Auto Museum in Maine hosts Cars & Coffee: Steamers on June 9. The event, from 9 a.m. until noon, will feature steam-powered vehicles.

The Kansas City Automotive Museum hosts its Oddballs and Obscurities Car Show on June 9 from 8 a.m. until 1 p.m. The museum also will participate in the annual Motori in Piazza car show June 3 at Zona Rosa in Italy.

The Saratoga Automobile Museum in upstate New York will serve as the starting point Sunday for a Shelby Cobra road tour that runs through June 14. The cars, 15 authentic Cobras, will be at the museum from 10 a.m. until noon

Oddballs & Obscurities is the theme of a car show June 9 at the Kansas City Automotive Museum in Olathe, Kansas.

Britain’s National Motor Museum at Beaulieu stages its “Classic and Vintage Commercial Show” on June 9-10 with more than 300 trucks and buses on display. On Father’s Day weekend, the museum opens its new summer exhibition, “The Art of Kustom,” featuring automotive creations by Andy Saunders, who will drive one of his customs onto the museum grounds and will unveil his newest project, Metropolis, a transformed 1939 Peugeot 202 pickup, found in a field in France and believed to have been requisitioned by invading forces during World War II.

“Chevrolet Racing: Louis to Le Mans” is the theme of a new special exhibit opening June 11 at the National Corvette Museum in Bowling Green, Kentucky. The exhibition, scheduled to run until January 4, 2019, showcases cars and artifacts from Chevrolet’s racing history.

LeMay – America’s Car Museum in Tacoma, Washington, will do “hoods up” from June 12-22 as part of its Father’s Day celebration, exposing the engines on cars in its galleries.

The AACA Museum in Hershey, Pennsylvania, hosts its annual CARnival Car Show as part of its 15th anniversary celebration on June 16. Activities include valve-cover races, antique car rides, behind the scenes tour of the Schmidt Collection storage building, and tethered hot-air ballo0n rides.

It’s Cool Cars for Kids on June 16 at the Simeone Foundation Automotive Museum from 10 a.m. until 4 p.m. The event is held in conjunction with the Philadelphia Concours d’Elegance, also being held at the museum.

“Gear Up” is the title of a S.T.E.A.M.-oriented summer camp being offered June 18-22 at the Auburn Cord Duesenberg Museum in northeastern Indiana. The camp, which runs daily from 9 a.m. until noon, is geared toward those ages 8-10.

The Seal Cove Auto Museum in Maine will stage a Demo Day on June 21 with rides in antique autos and talks by museum curators, and a week later (June 28) it hosts a Car-B-Que car show, dinner and life music program from 4 to 9 p.m.

“1980s Performance? Yes!” is the theme of an exhibit to run from June 23-July 8 at the Simeone Foundation Automotive Museum in Philadelphia. The museum is looking for cars such as an IROC Camaro, SVO Mustang, Buick Grand National, Mazda RX-7, Omni GLH and Nissan Z cars to include in the showcase. For details, visit the museum’s website.

The France Family will receive the fifth annual Cameron R. Argetsinger Award for contributions to motorsports on June 28 from the International Motor Racing Research Center in Watkins Glen, New York. The program will be held at the Corning Museum of Glass in Corning, New York. Previous recipients were Chip Ganassi, Richard Petty, Roger Penske and Mario Andretti.

On June 30, the Newport Car Museum in Rhode Island hosts the Factory Five Racing cruise-in, with more than 120 vehicles that were “Built, Not Bought” expected to be on display.

The British Motor Museum hosts its “BMC & Leyland Show” gathering on July 1. As part of the cruise-in, convoys of cars will leave from Cowley and Longbridge and arrive at the museum.

“Silver Arrows 1934-1939” is the title of an exhibit to run from July 7 to September 2 at the Louwman Museum in the Netherlands. The exhibit will feature seven of the famed Mercedes-Benz racing cars.

National Corvette Museum curator Derek Moore will lead a special Museum in Motion tour from July 8-12 with a theme “Ford vs. Chevrolet.” The trip, says the museum, will be “a fascinating expedition through American automotive history. In this tour we will see for ourselves the way that innovators, inventors, and entrepreneurs used the automobile as a vehicle to change our world forever.” Visits include The Henry Ford Museum and Greenfield Village, and the GM Global Propulsion Center. For details, visit the museum website.

The Simeone Foundation Automotive Museum in Philadelphia offers its first Race Car Summer Camp for ages 10-16 from July 9 to 13. The camp will use motorsports to explore STEM subjects, and each camper will design and race a CO2-powered car. For information and registration, visit the museum website.

The British Motor Museum hosts its 10th Old Ford Rally on July 15. The event, which is expected to feature 400 classic vehicles, including commercial vehicles and tractors, is the largest of its kind in England.

It’s “Supercar Saturday” on July 28 at the Brooklands Museum in England, where high-performance vehicles — vintage and modern — will take part in runs up the Brooklands Test Hill and on-track demonstrations.

The AACA Museum in Hershey, Pennsylvania, offers Model T driving experience classes July 18, 21 and 28 and August 4 and 11, September 8 and 9 and October 20.

The Automotive Hall of Fame in Dearborn, Michigan, welcomes its Class of 2018 at a gala ceremony July 19. Those being enshrined are Kiichiro Toyoda, founder of Toyota; Tom and Ray Magliozzi of Car Talk radio fame; Frank Stronach, founder of automotive supplier Magna International; and Mike Jackson, chairman of AutoNation dealerships.