It’s interesting how some cars, hailed when new as some of the best in the world, somehow 30 or so years later are largely forgotten. Part of the reason is that they were low-production cars, and few survived.

With mid-range sports cars, they also can suffer a multitude of owners over the years, each buying the car for less, and as expensive systems needed repair, then ended up parked and neglected. This befell many Jaguar E-Types and Porsche 912s in the 1980s, yet those cars have now become prized collectibles that are restored and brought back from their neglected states. 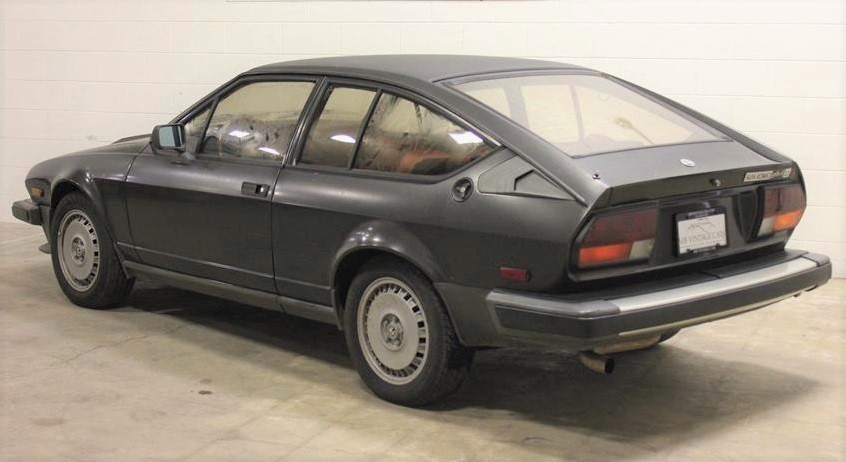 The Pick of the Day is part of a more-recent generation of those mid-level sports cars just coming into the limelight with collectors, a 1983 Alfa Romeo GTV 6. But instead of having been haphazardly “fixed up” by a succession of budget-conscious owners, this desirable GT is said to be a one-owner car in all-original, low-mileage condition.

The GTV 6 was the last sports/GT coupe that Alfa Romeo imported to the United States before their eventual pullout in 1995, and in many ways, it was the best standard-bodied coupe they had built up to that point. With a front engine/rear transaxle layout, the car had amazing balance, and the striking styling was by none other than Giugiaro.

But what made the GTV 6 so exceptional, even when compared with competitors such as the Porsche 944 and Datsun 280ZX, was the 2.5-liter SOHC V6 engine. This was one of the finest V6 engines built at the time, generating strong performance and an exhaust note to rival a Ferrari Dino.

The GTV 6 also offered a truly modern cockpit with great seats, AC that actually worked, electric windows that also worked, and for the first time in Alfa Romeo history, an adjustable steering column. This was truly a modern Alfa Romeo, one that was amazingly fun to drive and easy to live with.

This Alfa, advertised on ClassicCars.com by a dealer in Cleveland, looks to be a great example, which the seller states is an all-original, one-owner car that has covered only 62,000 original miles from new. It still has its 1983 title in the original owner’s name.

The dealer calls it a straight and honest car with a few minor rust bubbles by the windshield rubber, which is pretty common for these cars, and some rusty bits on its underside. The front seats have splitting on the seams, which look repairable. The paint shows fading, with thankfully no effort to conceal flaws in the bodywork.

The Alfa Romeo runs and drives, the dealer says, but since it has been sitting for about 20 years, a belt and water-pump service would be needed, at the least, before taking it out on the road.

These cars rarely come up for sale and are even harder to find in original, single-owner condition, with no history of a “budget restoration” being done by one of those later, less-affluent owners.

The GTV 6 is a great Alfa Romeo GT car, and this one could be treated as a rolling restoration, with money spent to spruce it up as you go along, perhaps along with rising value. The asking price of $14,950 leaves plenty of wiggle room.