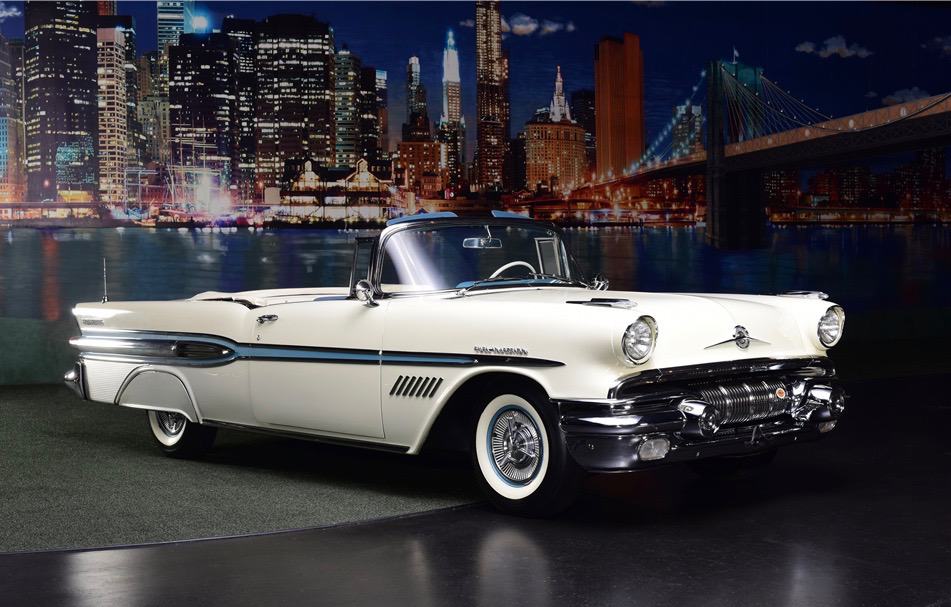 Lot 704.1 is one of only 630 such fuel-injected 1957 Pontiac Bonneville convertibles produced at the rate of just one for each of the 630 U.S. Pontiac dealers.

Semon “Bunkie” Knudsen had just become president of the Pontiac Division of General Motors, which he transformed, in part, by bringing in Pete Estes from Oldsmobile as chief engineer and putting John DeLorean in charge of advanced engineering.

The mission was to appeal to younger buyers, and even before the famed GTO was introduced Knudsen made some changes to enhance the appeal of the ’57 models. A new Strato-Streak V8 engine was introduced and enlarged to 347cid for the Bonneville, which also got fuel injection.

The Bonneville convertibles were available only in Kenya White, but with blue or red seat inserts and matching blue or red convertible tops. This car has the Sky Blue seats and top.

All 630 of the convertible were equipped with power steering and brakes, power windows and stops, and signal-seeking radios. Rear fender skirts were an option.

This car, from the John Staluppi Cars of Dreams Collection, underwent a body-off restoration several years ago. It’s engine is connected to an automatic transmission.