Visiting RM Auctions’ Fort Lauderdale sale is a bit like going back in time.

The two-day sale, being held April 6 and 7 at the Broward County Convention Center in Fort Lauderdale, Florida, is being held under the RM Auctions banner, not RM/Sotheby’s. Looking through the roster of cars, which includes a 1976 Oldsmobile 98 Regency, you’d be forgiven for mistaking this event for an Auctions America sale.

But Auctions America never held the marketing magic of its corporate parent, and so RM Sotheby’s Group has integrated the Auctions America subsidiary into the broader banner. Renamed RM Auctions, the Fort Lauderdale sale is the first one being held under the new old name, according to Gord Duff, global head of auctions for RM Sotheby’s.

Whether the change makes a difference remains to be seen, however. For example, will everyone (will anyone?) will understand the difference between RM Auctions and RM/Sotheby’s?

Regardless, like RM Auctions of old, this sale is a mixture of marvelous and mundane, a feast for every automotive enthusiast. Here are my favorites:

It’s true that a real high-end luxury product speaks for itself; marketing is not necessary. And so it is with this heart-stopping Packard, restored by noted classic car restorer Steve Babinski in 2001 and lovingly maintained since. The mid-1930s produced the finest Packard ever built, and 1937 is notable for the introduction of an independent front suspension and hydraulic brakes, both of which will make this far better to drive than earlier samples. And it’s handsome, quiet dignity speaks volumes of its place in the automotive world. 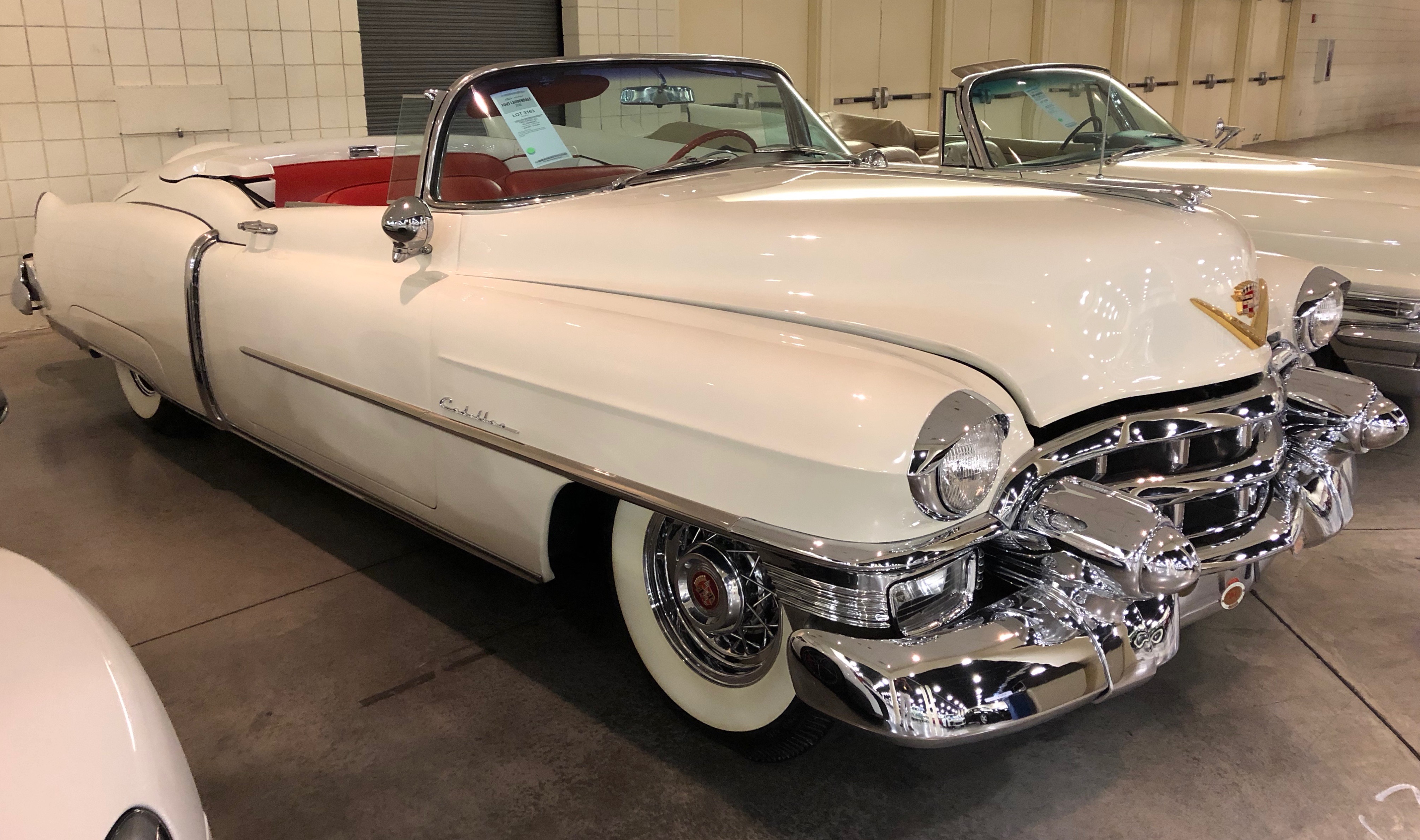 If new Cadillacs had a scintilla of the glamor and performance of this one, the company would still be called the “standard of the world.” This was the first Cadillac to wear the Eldorado name, and was introduced alongside the Oldsmobile Fiesta and Buick Skylark; specialty convertibles all. This voluptuous car the most expensive Cadillac offered for 1953, and with 532 built, it was exclusive. This is the 73rd one built. Having been restored in the late 1990s, it’s been driven 100 miles since. Its creamy white paint, optional wire wheels and dual spotlights won my heart. Perhaps this is why it’s an AACA Senior and Grand National winner. True glamor never fades, and this car proves it.

If there’s one legacy of Harley Earl that survives intact, it’s the presence of the Chevrolet Corvette. While not a performance machine upon its debut, it slowly became one, and 1957 is the year all of the stars aligned, when consumers reaped the benefits of the Corvette’s racing program, which started the year before. For the first time, buyers could get a 283 cubic-inch V8 with optional fuel injection and a four-speed manual transmission. Horsepower reached 283, or one per cubic inch. Best of all, this copy, one of 6,339 built in 1957, has the fuelie engine, four-speed manual along with power windows, radio and wears a sublime color combination.

From its debut at the Earls Court motor show in 1955 through its final bow in 1962, the MGA is a classic British sports car trifle. Having come after the TF, the MGA must have seemed positively futuristic. Yet everything about it is blessedly simple, from its sublime styling to its just the essentials interior. This car appears to have the 1.5-liter pushrod engine rather than the later twin-cam, and is mated to a four-speed manual transmission. The engine came from BMC’s parts bin, having started life in 1947 in the Austin A40. The rest of the car was new when it debuted. While its performance isn’t scintillating – 0-60 mph takes 14 seconds – there’s a primacy to this car that captures the heart. Thankfully, this sample isn’t hermitically sealed perfection. It has the sort of patina that makes it the perfect companion for that perfect sunny day. 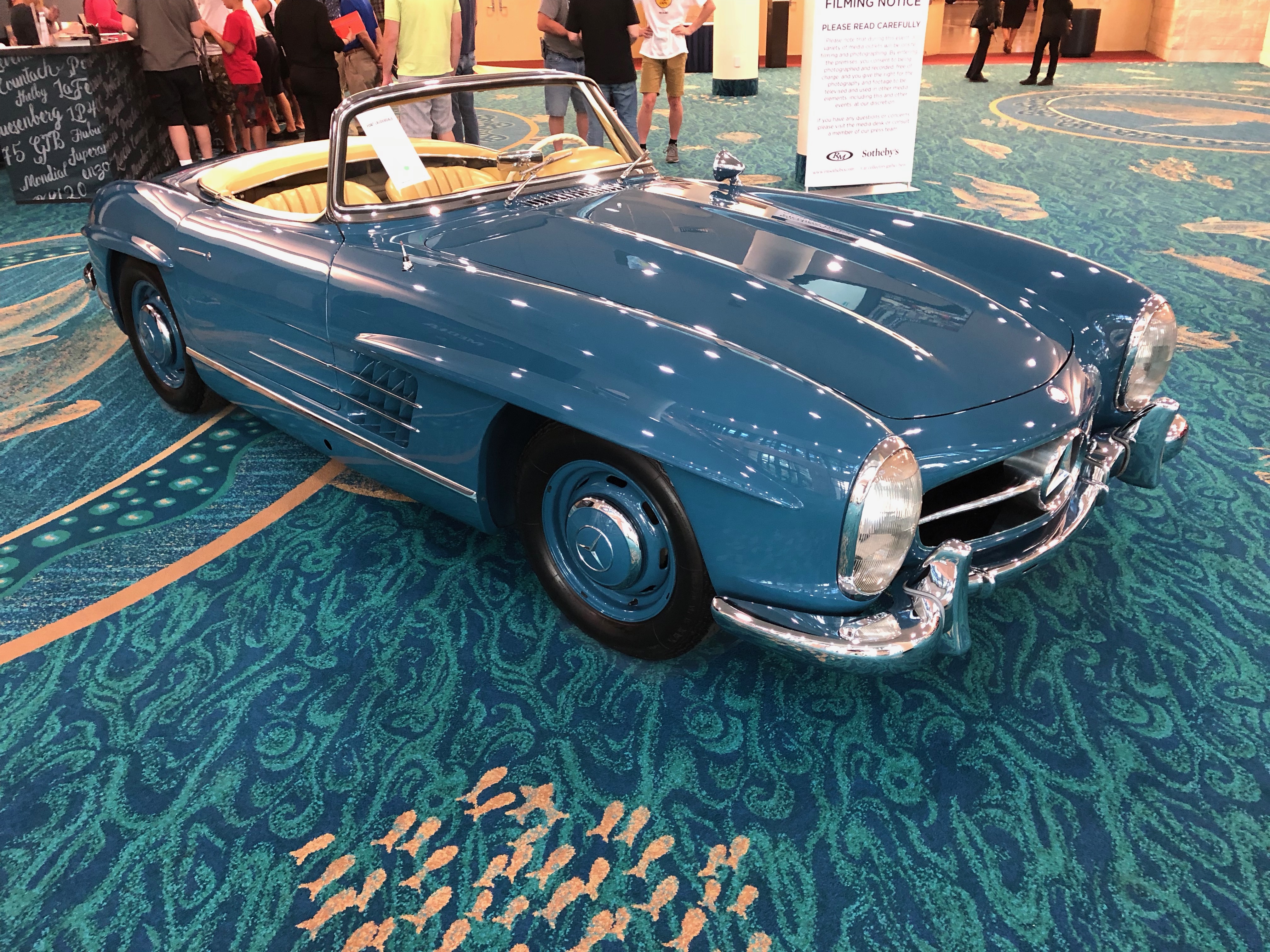 When Mercedes-Benz introduced a convertible version of the 300 SL at the 1957 Geneva Motor Show, it finally made the sports car civilized. With a revised suspension, 155-mph capability, and a welcoming luxurious interior, this was one of the finest sports cars of its time. This sample is a remarkable survivor, having been repainted, but possessing its original interior. With a documented 36,600 original miles on the clock, this should be one of the stars of the show. Interestingly, RM expects this ride to fetch at least $1.2 million, more than the $1 million a 1957 Mercedes-Benz 300 SL Gullwing is expected to bring at the same sale. 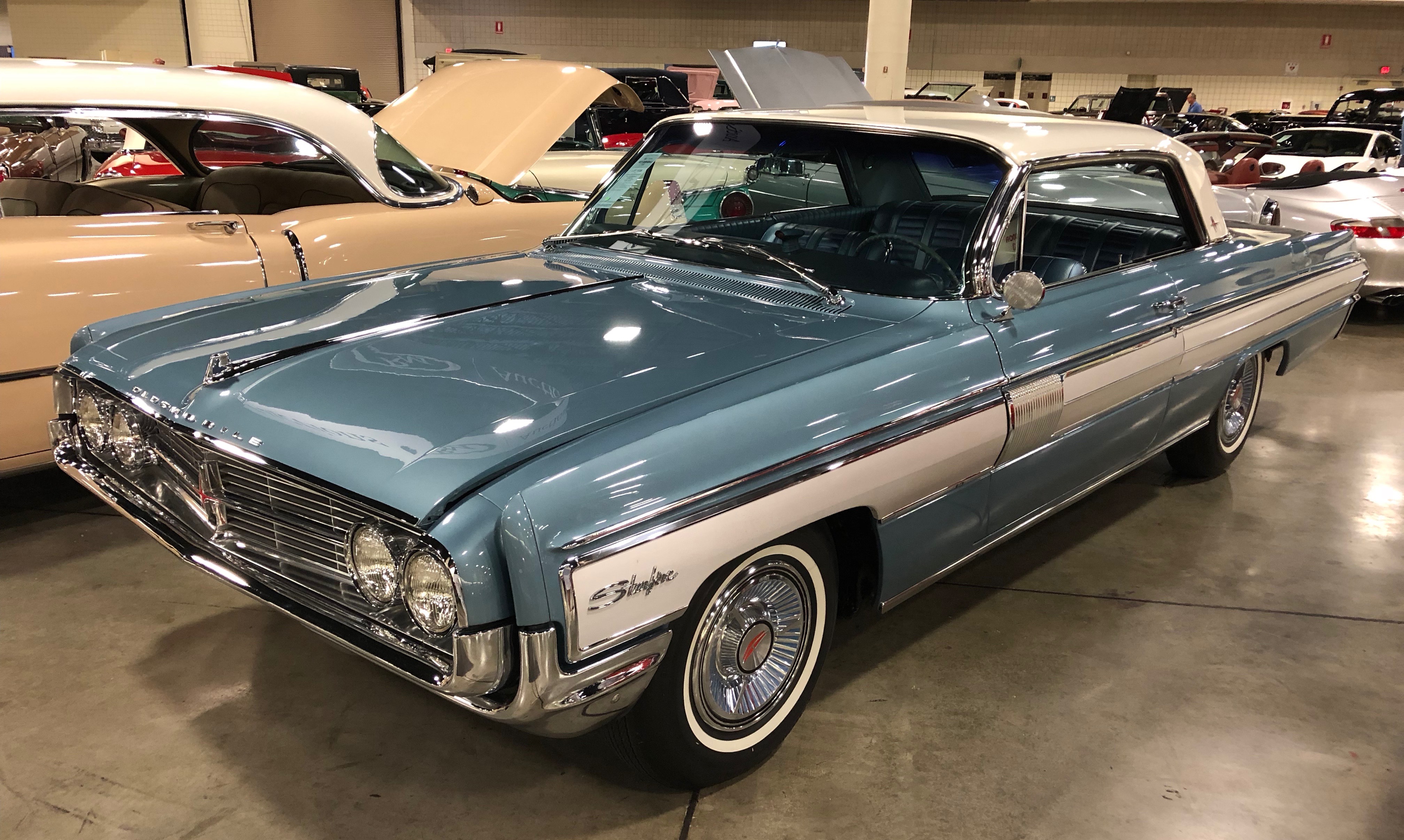 This was the first year for the hardtop coupe version of Oldsmobile’s entry into the personal luxury market. Employing the Super Eighty-Eight’s 123 inch wheelbase, the 1962 Oldsmobile Starfire was powered by a 394 cubic-inch V8 rated at 345 horsepower. As befitting a personal luxury coupe, it had lots of goodies, including a Hydra-Matic automatic transmission, center console with shifter, tachometer, courtesy lamps, two-speed wipers, power brakes, power steering, brushed aluminum trim, dual exhausts and leather trim. It was supreme in an era before Cutlass Supremes. This one has benefitted from a frame-off restoration, with 1,358 miles on the clock since. These always bring good money, and with good reason. 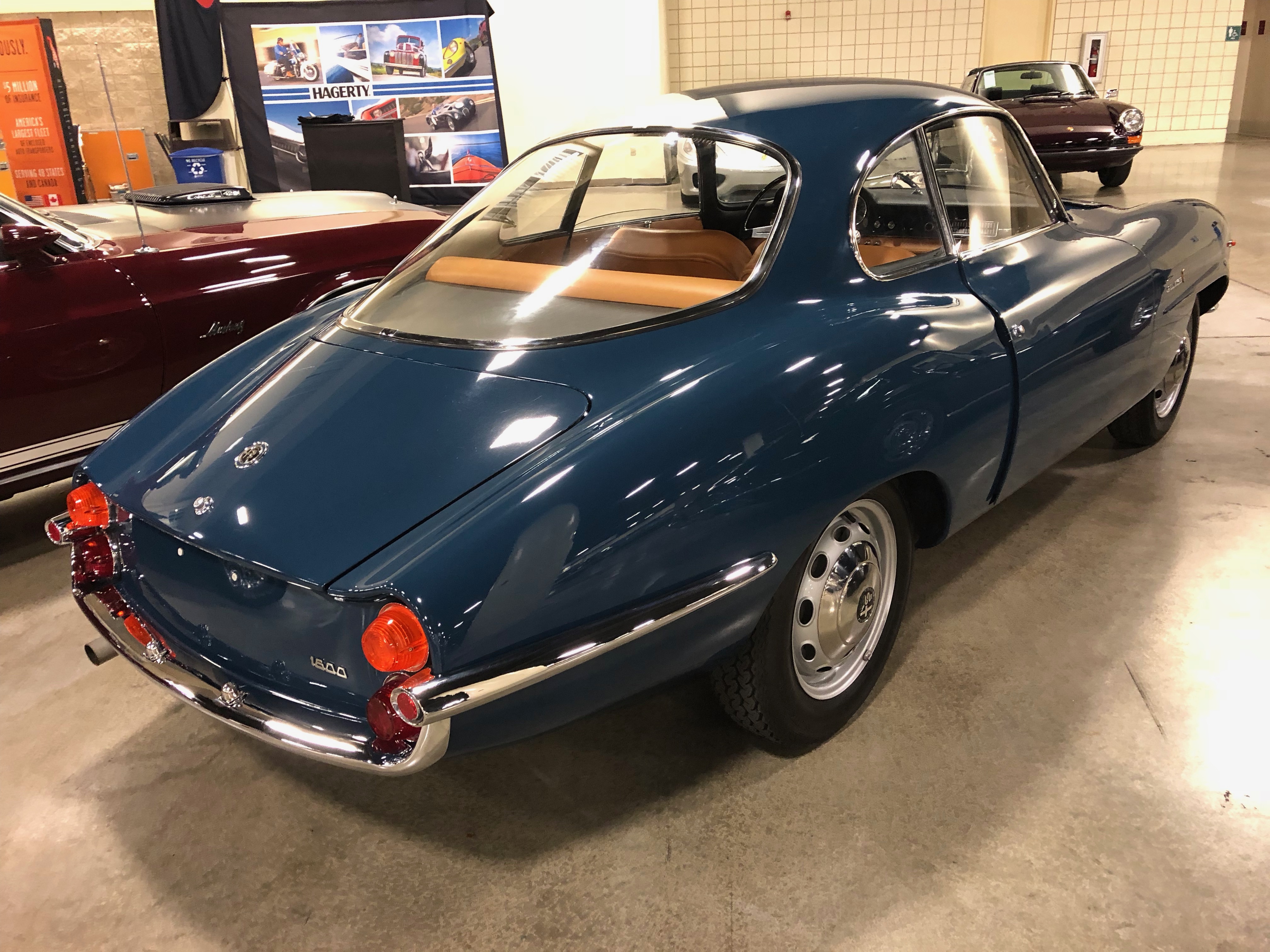 Great design speaks to the soul, and so it does with this lovely Alfa Romeo Coupe. Of course, falling for this Bertone-bodied lovely is dangerous. For life with an Alfa means living with its well-known quirks. And this one, while particularly striking in the finest high-style Italian fashion, isn’t a particularly fast car thanks to its steel body and 112-horsepower 1.6-liter twin-cam four-cylinder engine and five-speed manual. But that means everyone catches a better glimpse if you dressed in your finest automotive accoutrement. 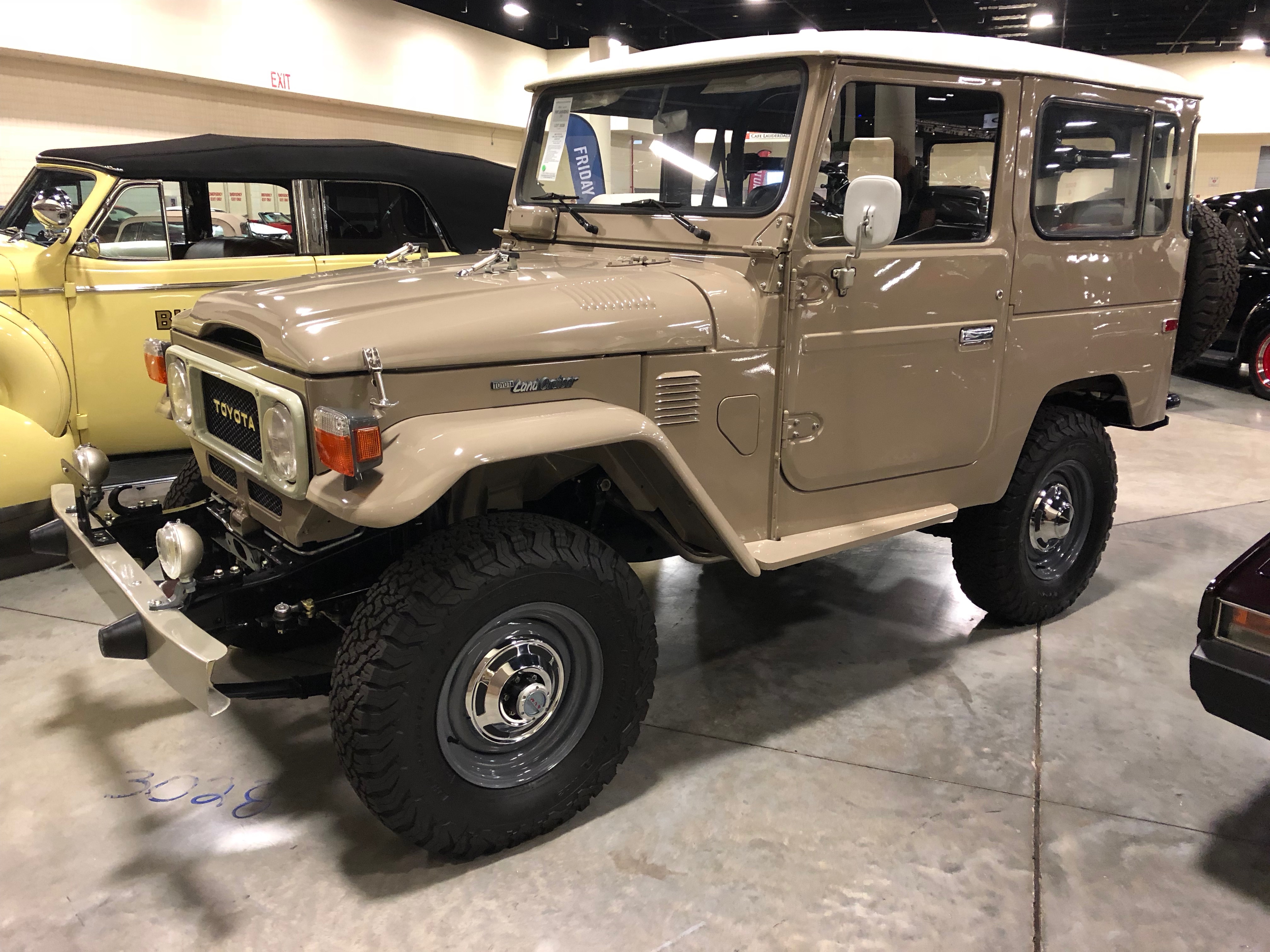 If any vehicle represents endurance, it’s the FJ40 Land Cruiser, Toyota’s copy of the World War II era Jeep. In particular, the vehicle kept Toyota dealers, what few there were, alive. It was the first vehicle exported to America, and after the failure of the 1959 Toyopet, went on to become Toyota’s best seller stateside. The little three-door 4×4 was powered by Toyota’s 3.9-liter inline six-cylinder engine, which was basically a reverse-engineered version of Chevrolet’s Stovebolt Six. A three-speed manual transmission and four-wheel-drive were included, and in the case of this sample, air-conditioning. This one has had a complete frame-up restoration to original specifications, and should bring a healthy return. 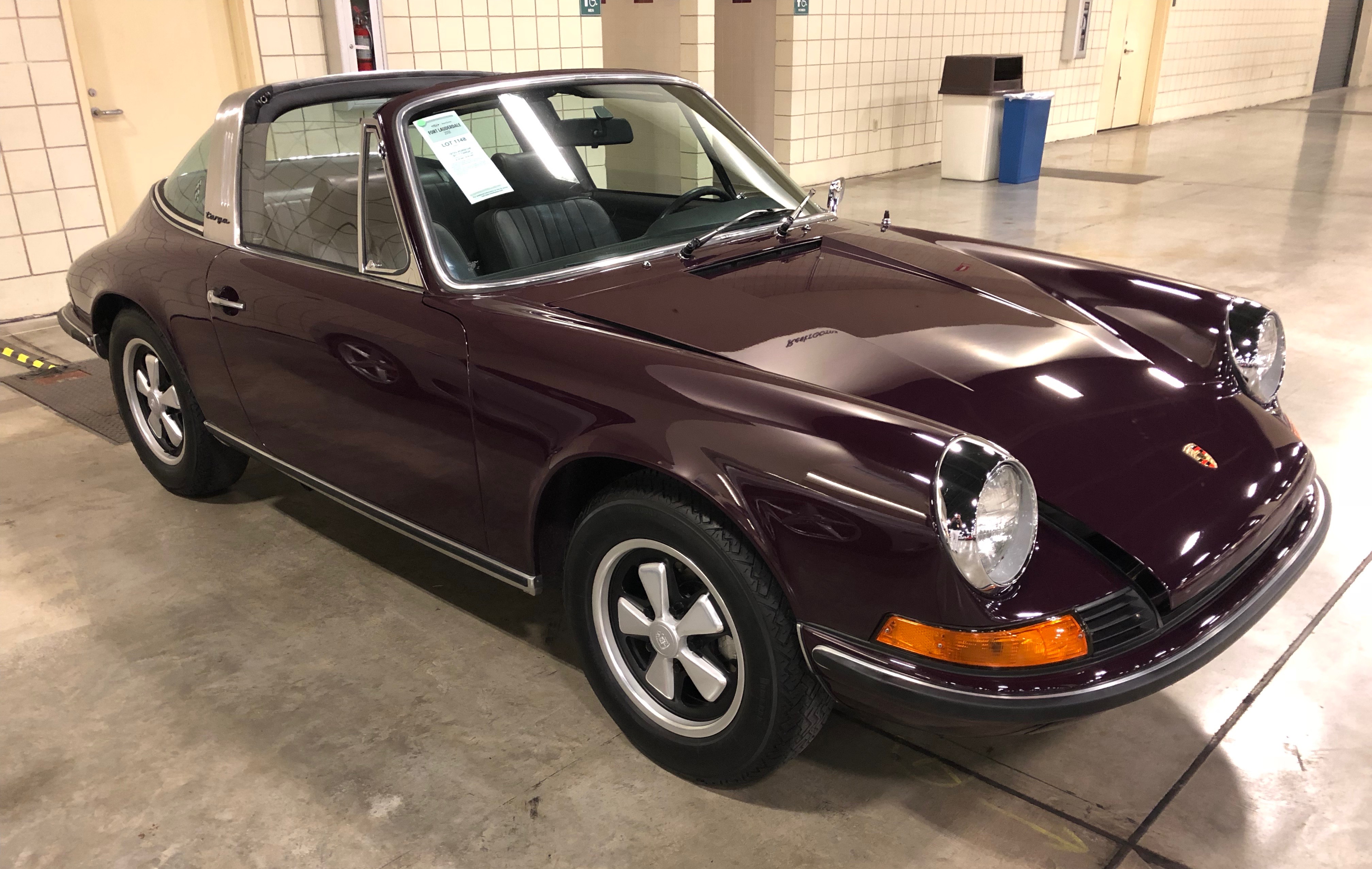 The Porsche 911 T debuted in 1969 as the new entry-level model in the 911 line, while the Targa, or “safety cabriolet” in Porsche speak, arrived two years prior as the company’s response to increased U.S. safety laws for convertibles. The T initially developed 110 horsepower from its 2.4-liter flat six-cylinder engine, growing to 134 horsepower with the mid-1973 switch to Bosch electronic fuel injection. This enchanting Aubergine-colored Porsche is oddly eye-catching and unlike modern 911s, will truly test your driving skills. And its sleek body doesn’t look bloated, as if it overdosed on steroids. Just don’t call it Barney. This is the last of the original long-hood Porsches, and a very interesting car. 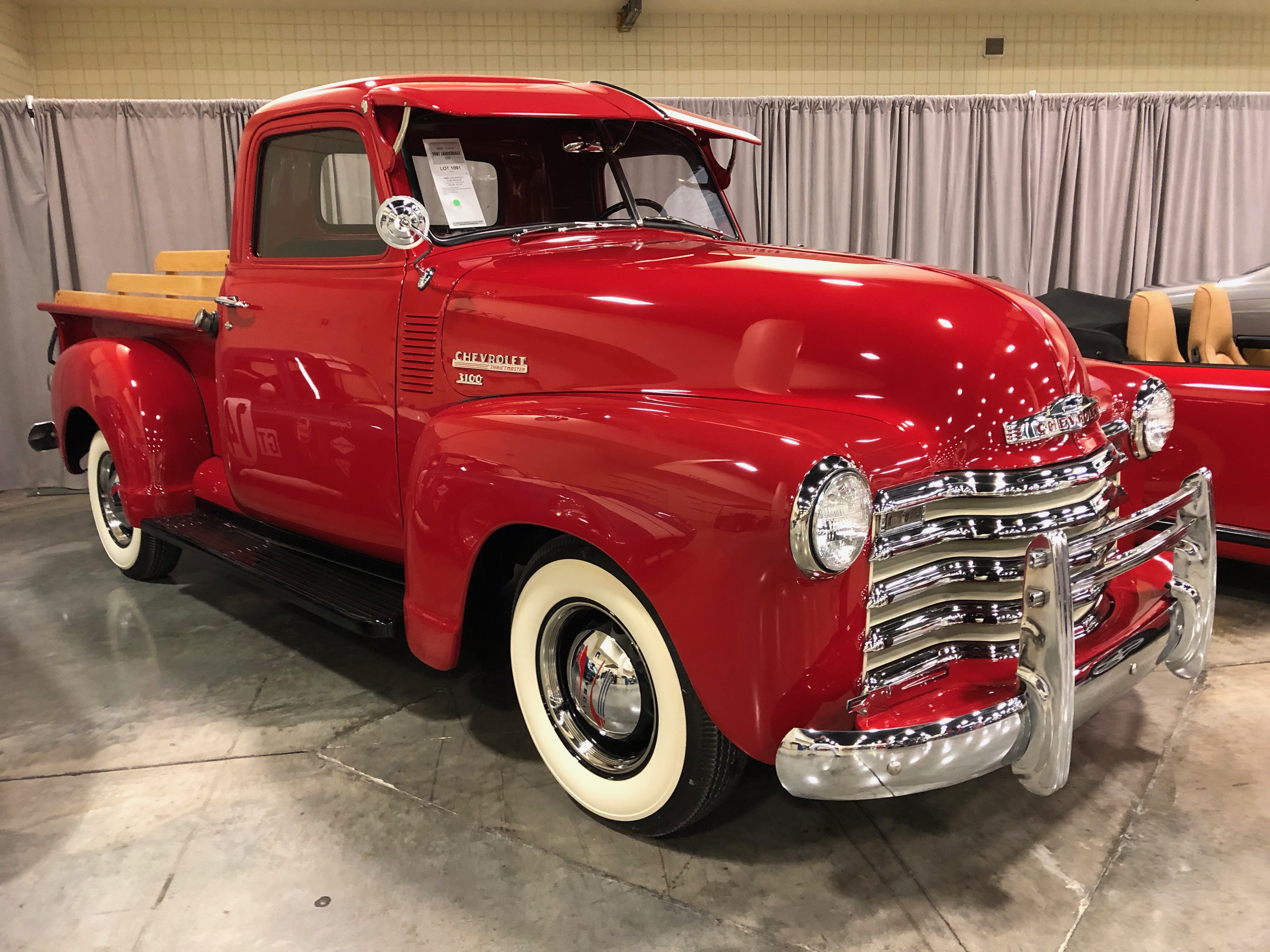 The first fully redesigned Chevrolets following World War II were not cars, they were trucks. Bowing in 1947, the “Advanced Design” trucks could accommodate three, thanks to a new single bench seat, and a cab that was 8 inches wider and 7 inches taller. This is the three-window cab; a five-window cab was also available. The 3100’s 216.5-cubic-inch (3.5-liter) inline six-cylinder engine produced xx horsepower through a three-speed transmission. A heater and defroster came standard for the first time. Popular when new, this work truck retains its sleek yet sturdy look. Fully restored, this beast of burden will easily find a new home.