Those of a certain age grew up watching 77 Sunset Strip each week on ABC and, long before there was a Fonzie of Happy Days, they encountered Kookie, a slick-haired parking-lot valet and would-be private eye who drove a stunning 1922 Ford Model T-Bucket hot rod.

The car, originally built by Norm Grabowski and called the Lighnin’ Bug, made the covers of Hot Rod, Car Craft and even Life magazines, but became famous as “Kookie’s Kar” because of its television-series popularity and that of its owner, Gerald Lloyd “Kookie” Kookson III.

Edd Byrnes, the actor who portrayed the character, became so popular with young viewers that he left the show in a demand for more money. Byrnes would return, and in an even larger role. However, in the meantime, Kookie’s car was sold by Grabowski to Jim “Street” Skonzakes, who revised the hot rod and toured it alongside his Golden Sahara custom car before locking them both away in storage.

Both cars were found after Skonzakes’ death late last year and Kookie’s Kar will be offered for sale alongside what has become known as the Golden Sahara II at Dana Mecum’s 31st Original Spring Classic auction scheduled for May 15-19 at the Indiana State Fairgrounds in Indianapolis. 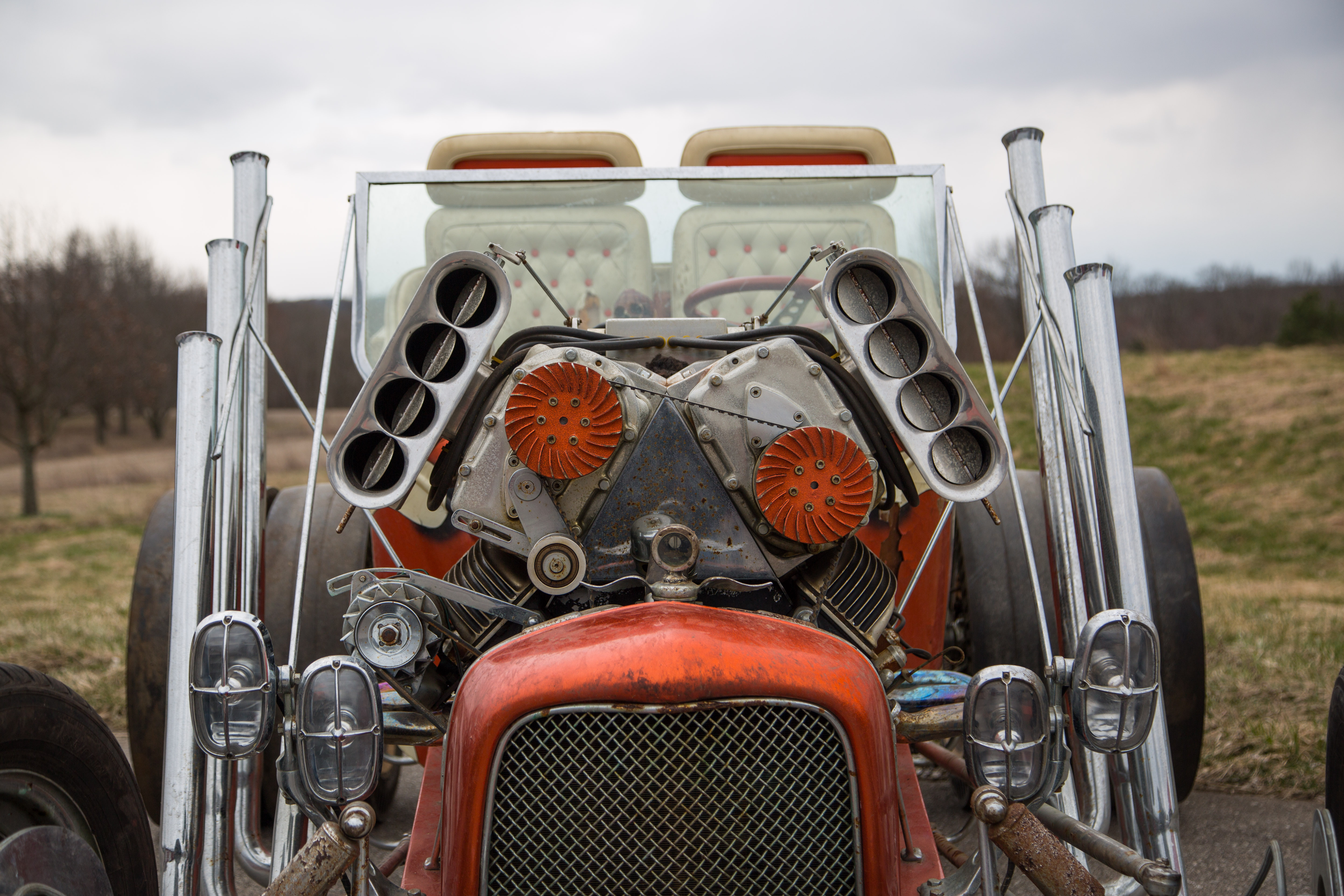 “This (car) is the catalyst of the T-Bucket Craze,” Mecum Auctions noted in its news release, “the very car that launched a massive movement among early Hot Rodders to achieve that signature look: the two-seater Model T-style body, dramatic forward rake and of course, the oversized, exposed engine to ‘drive’ the whole package home.”

However, the auction house added, “Street — famous for his wild, over-the-top customizations — wasn’t satisfied with merely owning the celebrated car; he had to get his ‘signature’ on it as well, and so, he took the car to Watson’s House of Style for a makeover,” Mecum Auctions notes in its news release.

Grabowski built the car in the early 1950s on a 1931 Ford Model A roadster chassis using the front half of a 1922 Model T and the shortened rear half of a Model A pickup, Mecum said. For power, Grabowski installed a 1952 Cadillac V8 and supercharger.

Grabowski also chopped out various sections of the frame and made other alterations to get the car’s stance just so. He installed the steering box from a milk truck, but installed it backward so that turning the steering wheel left would cause the hot rod to turn right, a problem that was fixed, but not until he’d driven the car that way from his home to a custom car shop. 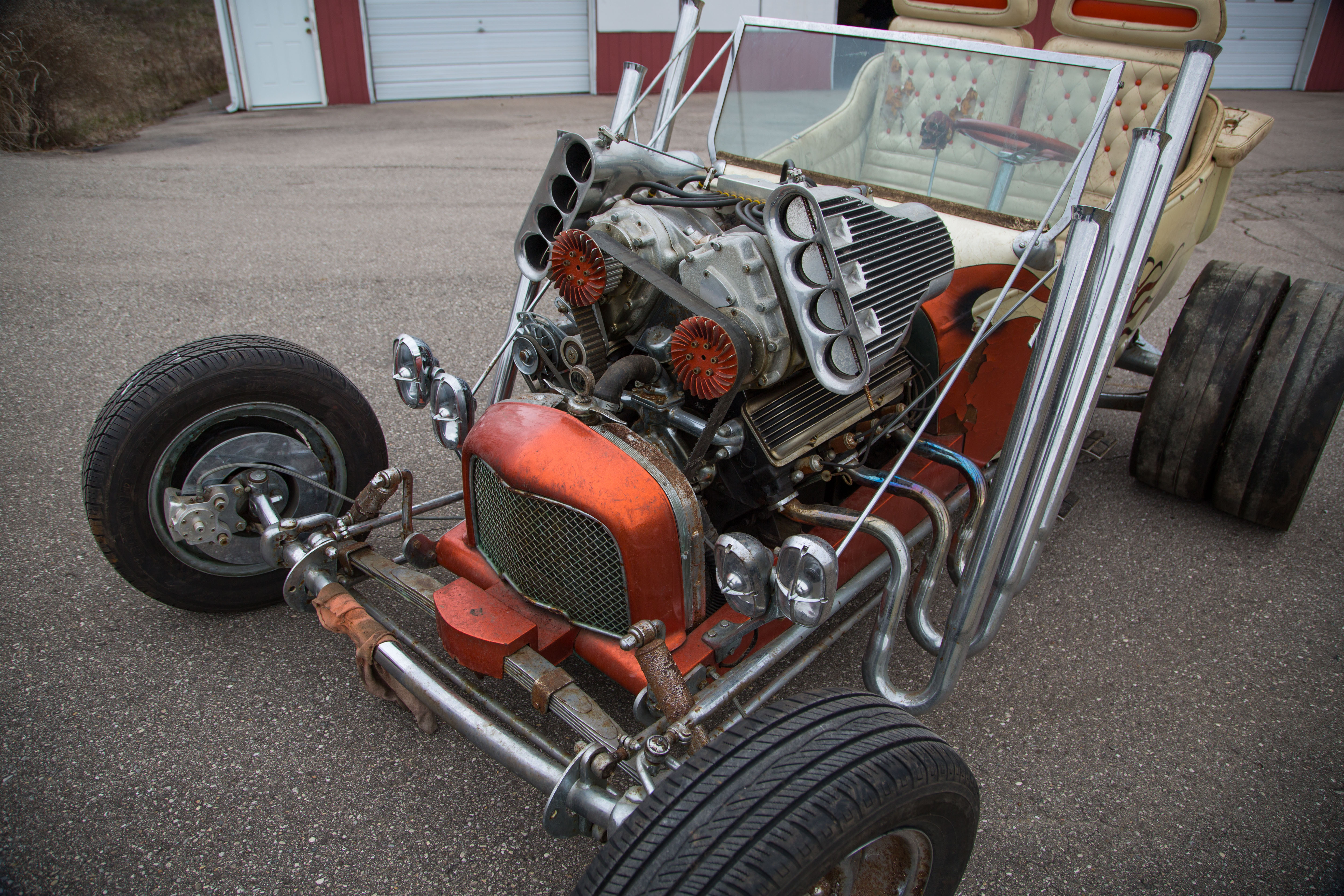 The car made its television debut in the Mr. Kagle and the Babysitter series in 1956, but it was damaged during filming. Grabowski made repairs, and also removed the supercharger, adding instead four Stromberg 97 carburetors. The car originally was black and red with a rolled-and-pleated leather interior, but Dean Jeffries was enlisted to paint it Dodge Royal Blue with flames and pinstripes.

After Skonzakes took ownership, he had it done in Rose Pearl with Candy Red flames with black tips and white pinstripes, and the interior was done in white pearl-button tufted leather. He later added dual headlamps, dual superchargers, dual slicks and high-back bucket seats and “Zoomie” exhaust pipes.