If you’re driving on a rocky trail across the desert or a muddy two-track through the forest, an overly responsive throttle is not something you need. Problem is, even though the 2017 Toyota 4Runner 4×4 TRD Off-Road was designed just for such geographies, most of us do the overwhelming majority of our driving not off-pavement but on it, and in an urban environment where we tend to sprint from stoplight to stoplight and to race up freeway entrance ramps.

Perhaps that’s why Toyota unveiled this vehicle a couple of years ago in Ouray, Colorado, population 1,000, where you might have to hunt for pavement but where there are miles and miles of unpaved mountain trails waiting to be explored and enjoyed — in the right vehicle.

Speaking of which, if you and your vehicle are up to it, the Black Bear Pass trail that starts south of Ouray and descends — spectacularly — alongside Bridal Veil Falls into Telluride is one of the most spectacular and hair-raising routes in the Continental 48.

And let’s face it, if you can be secure in your Toyota Racing Development-tweaked 4Runner on such a trail, you also can be sure of getting where you need to go on pavement. It’s just that the 4.0-liter V6 engine’s power really isn’t released until you reach above 4,000 rpm, which may be fine for careful tire placement on the trail but not so much for sprinting ahead of traffic in the stoplight drag race.

For those who want the option of taking their urban-based SUV onto Colorado-caliber trails, the 4Runner seems an ideal mix of luxury and capability. Since its launch back in 1984, the 4Runner has been based on body-on-frame automotive architecture, a rugged construction abandoned by so many so-called sport utility vehicle producers.

“The 4Runner has a large and loyal following, with dependability being a key factor,” John Myers, national manager for Toyota truck and SUV marketing, said at the TRD Off-Road version’s launch. “4Runner owners often take their SUVs off the beaten path, so these new TRD Off-Road grades will be a popular recognition of TRD’s history in the off-road arena.” 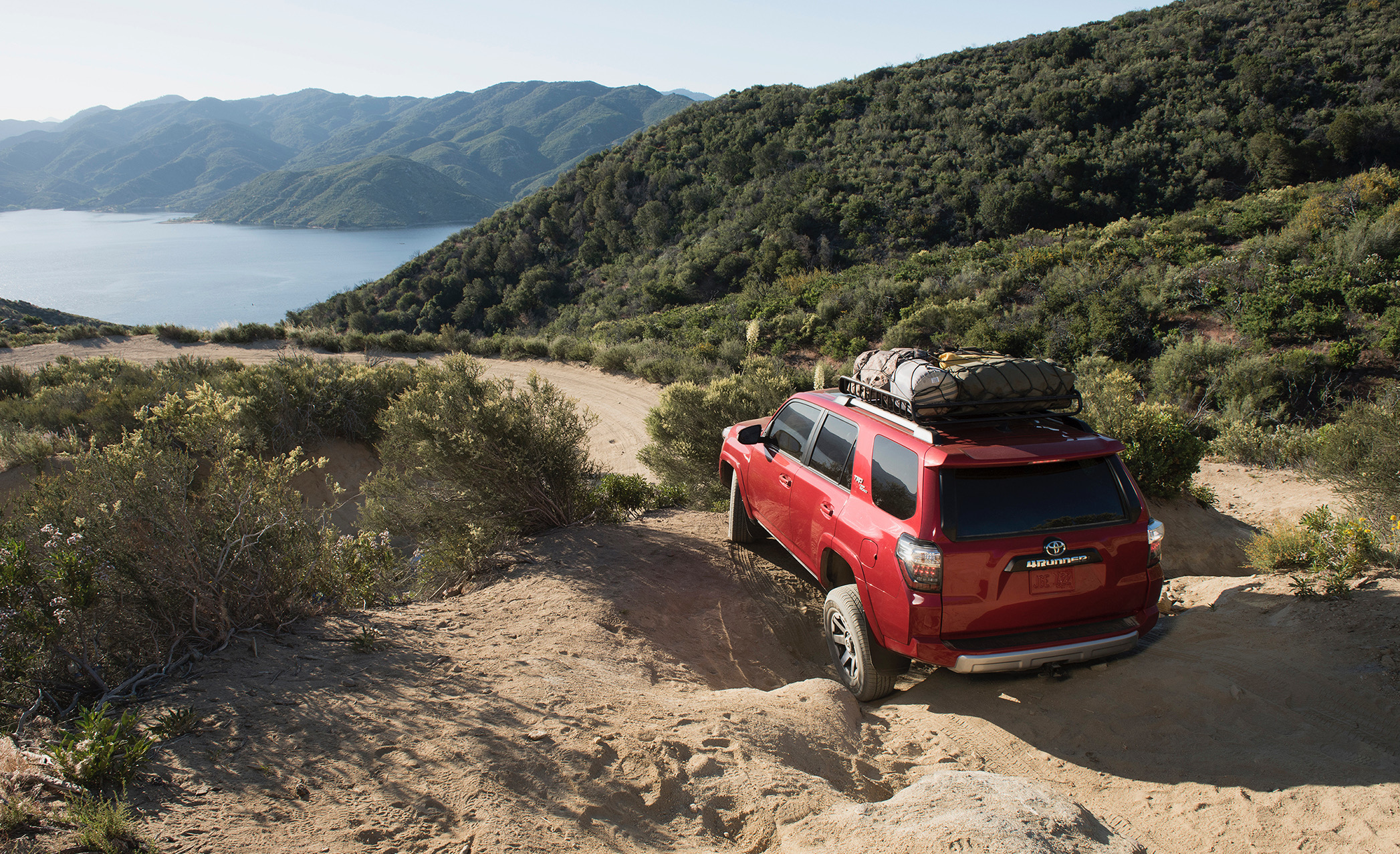 The upgrades include a Multi-Terrain Select system that enables the driver to match vehicle parameters with the environment, an electronic-locking rear differential, Toyota’s Crawl Control that enhances control while driving over obstacles, and Kinetic Dynamic Suspension for more wheel travel and traction, at slower speeds. And, of course, very visible TRD badging on the vehicle’s C pillars, as well as black-painted wheels and special interior trim.

Maybe because it still uses old-fashioned but rugged body-on-frame construction, the new 4Runner has good-ol’ dial controls for its audio and HVAC systems as well as hands-free phone and navigation and such.

A third-row seat is available, but our test truck came instead with the optional sliding rear cargo deck and under-floor storage compartment. The sliding cargo shelf might come in handy sometime, but it also eats up a couple inches of height across the cargo deck. I’d probably opt for the third-row seat were I buying a 4Runner.

And were I in the market for a vehicle that is comfortable in town and capable far out in the boonies, I’d definitely want a rugged body-on-frame construction and the TRD technology this vehicle offers.