A display of lowrider vehicles has been hugely popular at the Petersen Automotive Museum in Los Angeles, and now the LeMay-America’s Car Museum in Tacoma, Washington, has opened an exhibit in its Route 66 gallery featuring 11 lowriders as well as lowrider-theme bicycles and art.

The cars, which will be displayed through April 15, are on loan from the Lows Traviesos Lowriders Club. 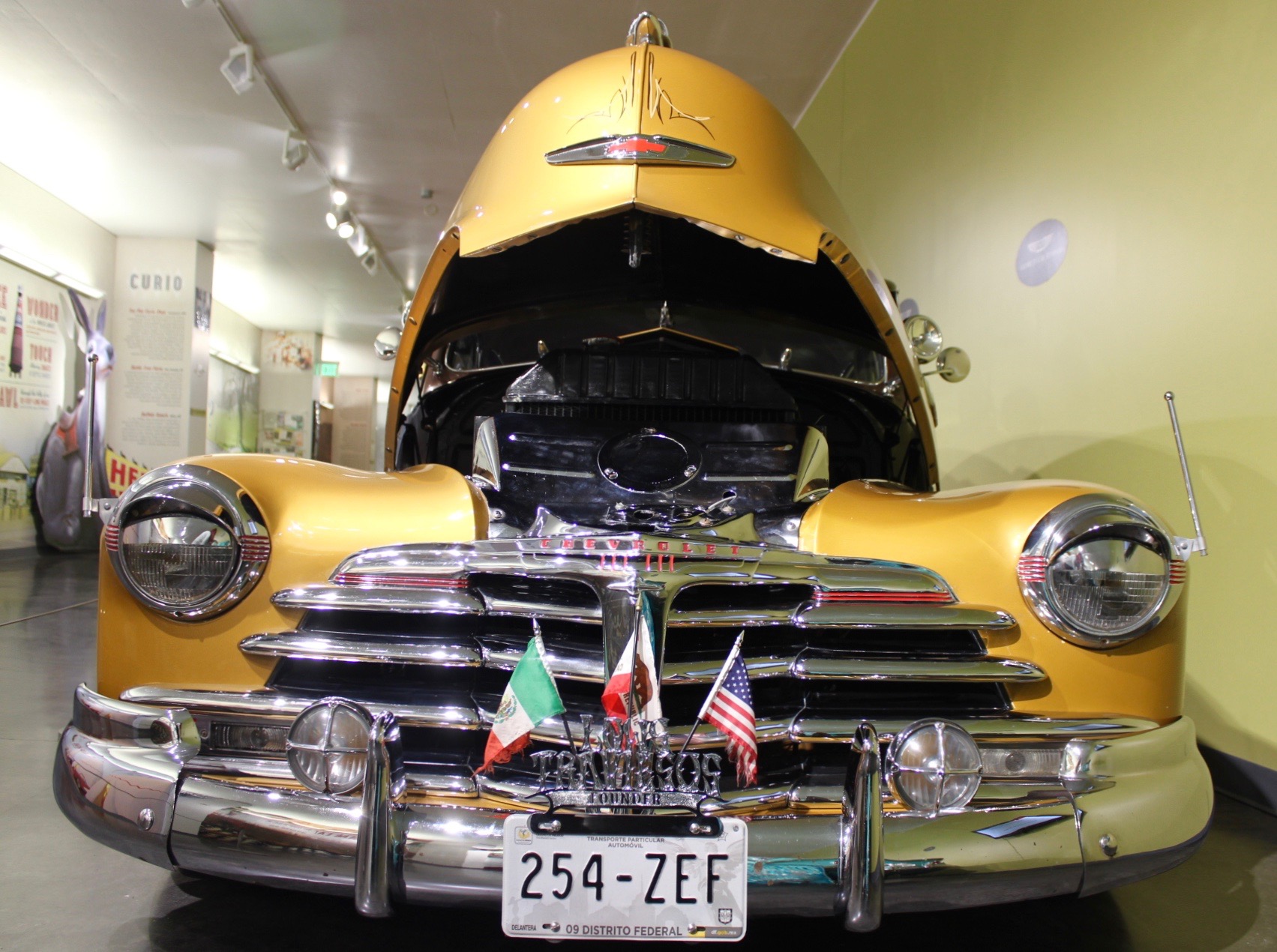 The Route 66 theme is fitting since lowriders trace their heritage to travel along that route between New Mexico and Los Angeles.

“When we began planning the next installment of Route 66, our admiration for the Washington lowrider community was important to share with our visitors,” the museum’s curator of exhibits, Scot Keller, is quoted in a news release. “They are an important part of our automotive heritage.”

Regarding the inclusion of the bicycles, a pedal car and even a lowrider stroller, Adam Langsbard, chief executive of America’s Automotive Trust, noted that “It is
important that our curatorial efforts not just celebrate the expensive collectible vehicles seen at concours around the world, but that we address a responsibility to display cultural expression through automotive and car culture’s diversity as well.”

Shipshewana Hudson museum will not re-open

The Hudson car museum in Shipshewana, Indiana, is closed for the winter but will not re-open in the spring. Neither the museum’s board of director nor the Friends of the Shipshewana Hudson Automobile Museum were able to come up with a way to fund continuing operations, and the board decided at its meeting this week to close permanently and sell the car collection.

According to media reports, the vote was 3-1, the lone vote to continue cast by JR Hostetler, son of the museum’s founder.

Eldon Hostetler assembled what is considered the world’s best collection of Hudson automobiles, which he donated to the city under an agreement that a museum would be built and would remain open as long as he or his wife were alive.

Much of the funding for the museum had been provided from some of the $150,000 generated annually from taxes on a large motel built on the property, which also included a community center where the cars were displayed. However, the motel was sold and the tax eliminated. The museum, which took in less than $25,000 a year from admission fees, was left to operate at a loss, reported to be around $100,000 for the past year.

The museum’s car collection has been appraised at $4 million. Details on the auction sale have not been announced.

The AACA Museum in Hershey, Pennsylvania, has opened its “Pioneers of African American Automotive History” exhibit that runs through February 19. Featured will be information about the only known African-American car manufacturer, C.R. Patterson; W.H.Phelps, who patented an apparatus to wash large vehicles; and Garrett Morgan, who created the first traffic signal.

The hoods remain open through February 28 on the cars displayed at The Henry Ford museum in Dearborn, Michigan.

“Your Muscle Car Memories” will be the topic discussed by photographer John Lacko at 3 p.m. Sunday as part of the Gilmore Car Museum’s lecture series at Hickory Corners, Michigan.

February is Education Month at the LeMay Collections at Marymount in Tacoma, Washington. Presentations scheduled for Saturday at “Development of the Automobile 1896-1915,” “The American Automobile Industry, 1916-1929,” and “Crazy Carl Fisher – Paving the Way for Speed.” Sunday’s presentations are “The Car & Feeding of vintage Car Ads & Photographs,” and “Collecting Original TV Commercials for Cars 1942-1960s.”

Instead of lecture presentations, they’re racing around the motorsports park at the National Corvette Museum in Bowling Green, Kentucky, where the “King of the Heap” series resumes Saturday from 8 a.m. until 5 p.m. The series is open to cars valued at $1,000 or less.

Emmanuel Burgin, Colleen M. O’Connor and Susan Wachowiak and their San Diego Drag Racing and the Bean Bandits will be featured with a book signing Saturday from 10 a.m. until 2 p.m. at Autobooks-Aerobooks in Burbank, California. The Bean Bandits team won more than 300 races and set many records in the 1950s.

If you live near the Owls Head Transportation Museum in Maine and wonder what to do with your children during school vacation week, February 19-23, the museum offers special children’s activities daily at 10:30 a.m. and 1 p.m.

The Simeone museum has scheduled one of its Demo Day vehicle exercise programs for February 10, this one featuring Brass Era vehicles including a 1907 Renault racer, 1901 American Underslung, 1912 Hudson Mile-A-Minute roadster and 1915 Packard roadster. On February 17, the museum opens its “Best of Britain” exhibit.

The National Packard Museum and the W.D. Packard Band will host “Mardi Gras at the Museum” on February 13, starting at 6:30 p.m.

Not New Orleans jazz but the blues will be the musical theme February 24 at “Drive The Blues Away” at LeMay-America’s Car Museum in Tacoma, Washington.