I need to admit this right up front. I am not a rider. You can blame my Mom, because when I was a youngster, a cousin, or maybe it was the daughter of one of my Mom’s friends, I really don’t recall now, was on her motorcycle when the car in front of her stopped suddenly. She hit the back of the car, flew off her bike and over the car, which then ran over her, causing severe back injuries.

You will never ride a motorcycle, my Mom proclaimed.

Being a good son, I obeyed, though that may have had something to do with growing up in the country and getting to drive at age 14 as long as I stayed on gravel. Down-shifting the 9-passenger Chevy wagon and power-sliding it through gravel turns was so much fun, I lost any interest in vehicles with fewer than four wheels.

But while I don’t ride, I admire the wind-in-your-face freedom enjoyed by those who do. I also have come to appreciate older motorcycles as amazing works of mechanical art, and can delight in the aesthetic beauty of their sheer simplicity.

So here I am, in Las Vegas, where Mecum and Bonhams are staging their annual late-January auctions of vintage motorcycles. Andy Reid reported yesterday on his favorite bikes at Bonhams. Today it’s my turn at Mecum.

Mecum stages its sale, this year is the 27th annual, at the South Point hotel and casino at the far, far south end of the Strip. The actual auction takes place in a 4,600-seat sports-style arena, and it’s quite a show. But the scene to be seen takes place in the adjacent Priefert Pavilion, which provides 80,000 square feet of space, which Mecum fills — this year to overflowing — with somewhere around 1,300 motorcycles.

My assignment was to pick as many as a dozen I’d want in my own collection, had I such a collection.

I did my job as diligently as possible, though I failed miserably.

I couldn’t contain myself. I blew by a dozen choices, but finally have culled what I’m presenting here to what I hope you’ll find a reasonable selection.

And while I may not know a lot about riding or the value of the vehicles, I know what I like, what I’d want to linger over in a personal collection, what I’d want to display as mechanical art and, who knows, I might even be tempted to climb aboard a few of them and putter along some out-of-the-way piece of pavement.

These are probably the last bikes a novice should consider. After all, board track racing motorcycles lack brakes, which certainly ups the bravery factor of those who raced them, or who still ride them. But there’s something so appealing about these vintage machines and the whole board-track era with its danger and daring do. Representing that genre among my favorites on the floor at Mecum are a 1913 Jefferson Twin and a 1915 Pope.

Was the Dreadnought sold by Sears Roebuck? Does the Bridgestone bike have some wonderful racing history in Japan? Why, after 43 years, has no one ever ridden the Rokon? I did learn that the Rokon, which is powered by a snowmobile engine, does have 5 miles on its odometer, all of it accumulated when the bike was pushed in and out of a dealership for many years, and also that the engine was started in 1992, but has not been run since then. 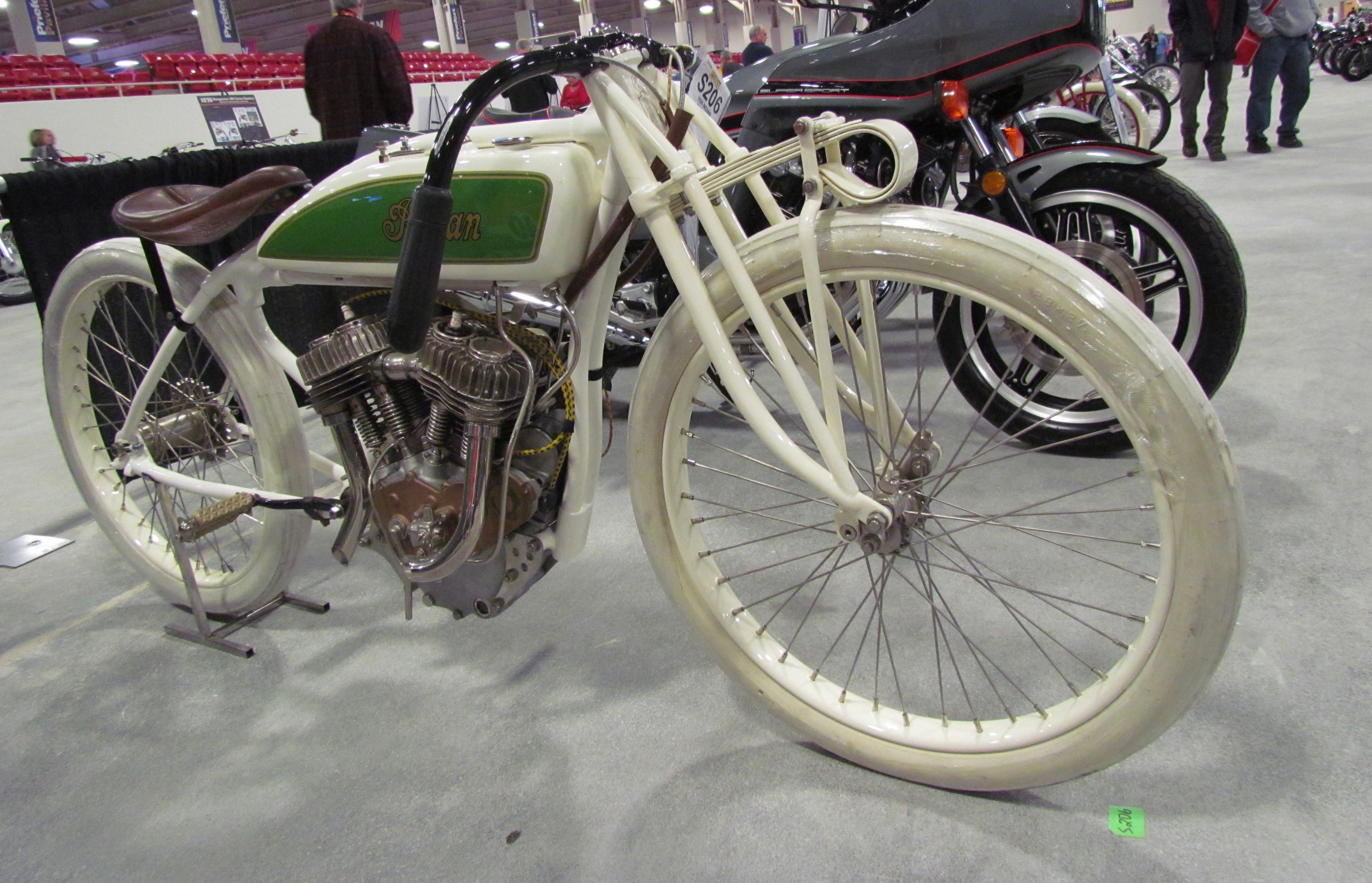 Another question: I love the looks of this bike, which formerly was owned by Argentine racer Antonio Gerli, but I’m curious about the curved stack of metal above the front wheel. That is apparently the bizarre-looking leaf spring for its simple front suspension. 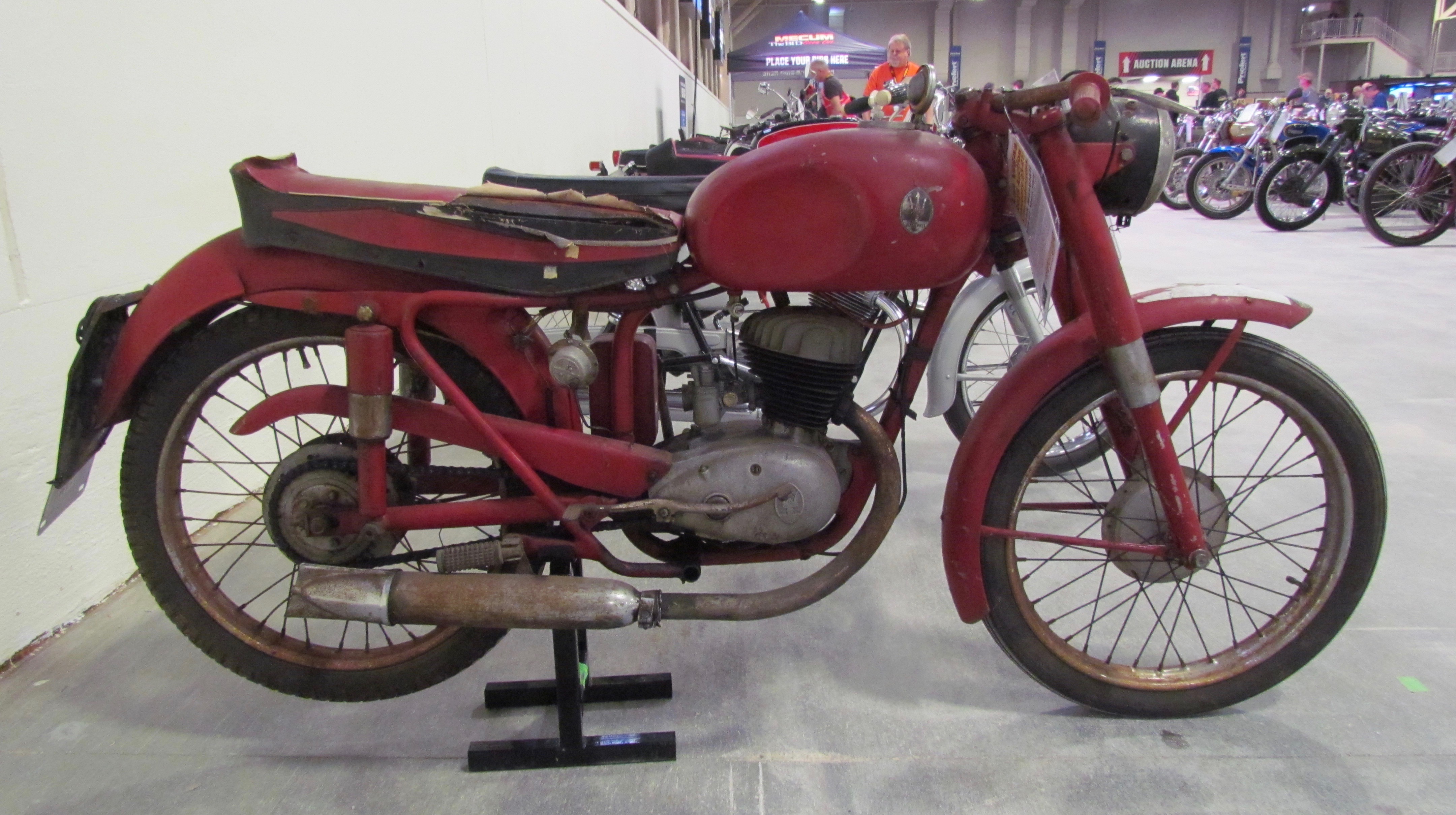 I know Maserati as a maker of sports cars, but this was one of maybe three Maserati motorcycles I saw at the sale. Turns out Maserati produced motorcycles to help put Italy back on powered wheels after World War II. This one was barn-found in Pavia, in northern Italy, where it had been hidden away for several decades. 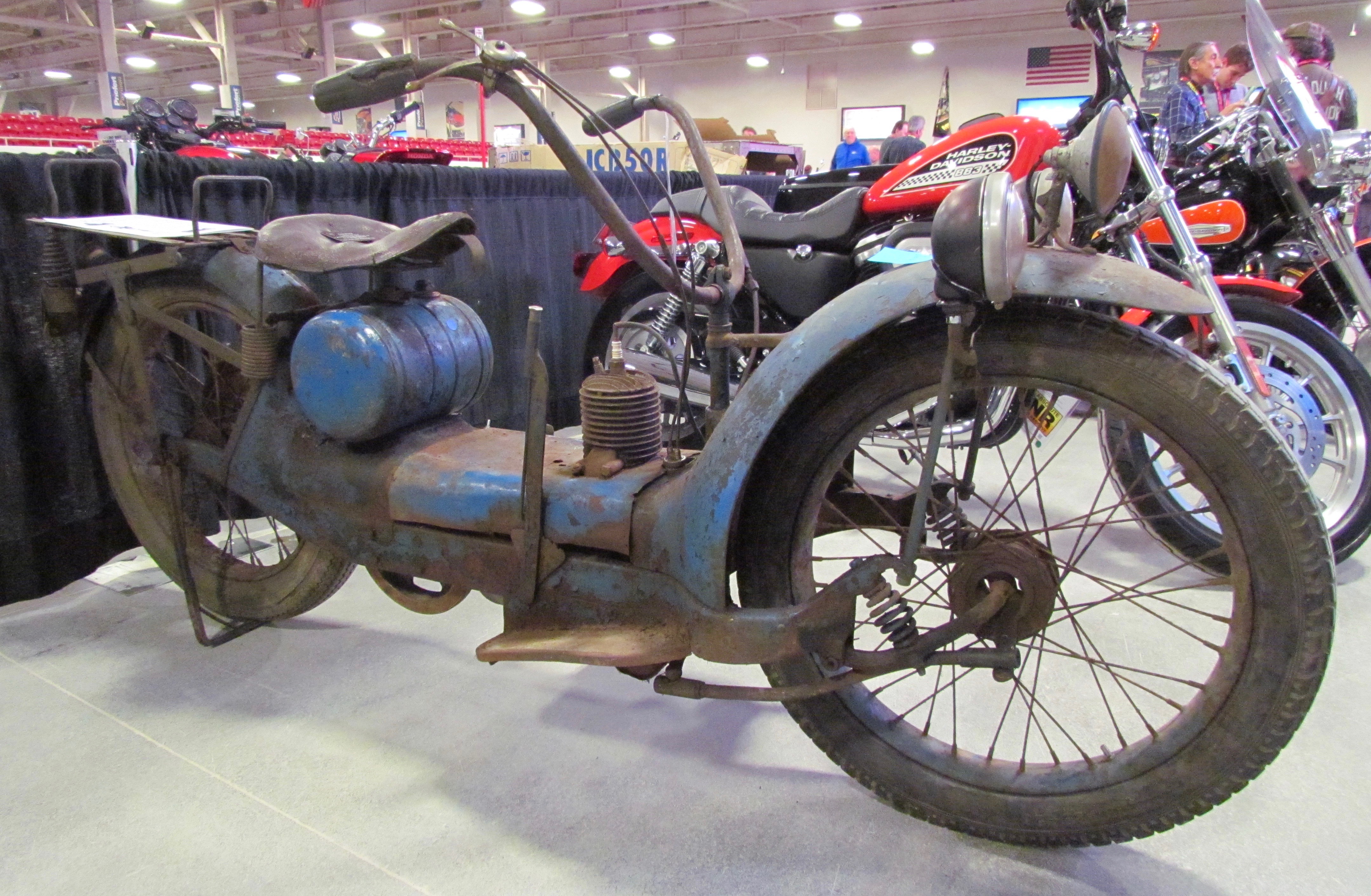 The story goes that Carl Neracher of Syracuse, New York, was trying to make a two-wheeler that had steering and seating similar to that found in an automobile. His Ner A Cars, around 10,000 of them, were produced from 1921-1927 and marketed for use by men, women and even children. The low-slung bikes had only six running parts and reportedly were easy to balance. The bikes approached 100 miles per gallon. Of the 10,000 produced, it is believed that perhaps only 60 at most survive.

While I’d be reluctant to start riding, the idea of having a sidecar to provide both stability and a place for a partner is appealing. The stylish Pannonia pair with a ’51 Studebaker nose comes from Hungary. The Jawa, with its quite stylish Velorex sidecar, has been ridden barely more than 2,000 miles since new. The Zundapp not only has a period-correct left-mounted sidecar, but that sidecar has tandem seating. 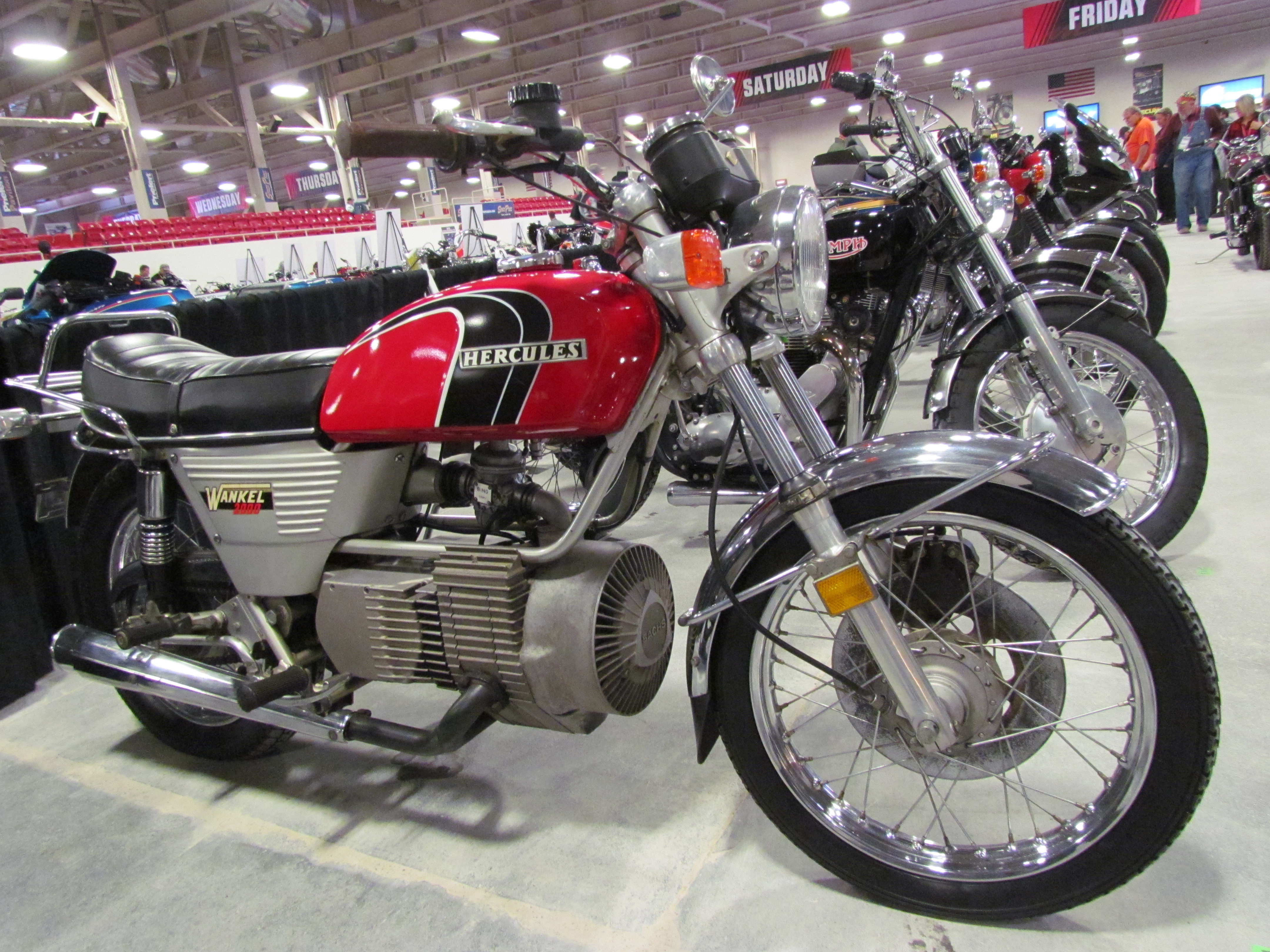 German engineer Felix Wankel was the creator of the rotary rather than piston-driven internal-combustion engine. So, would this be sort of the Mazda RX-7 of motorcycles? 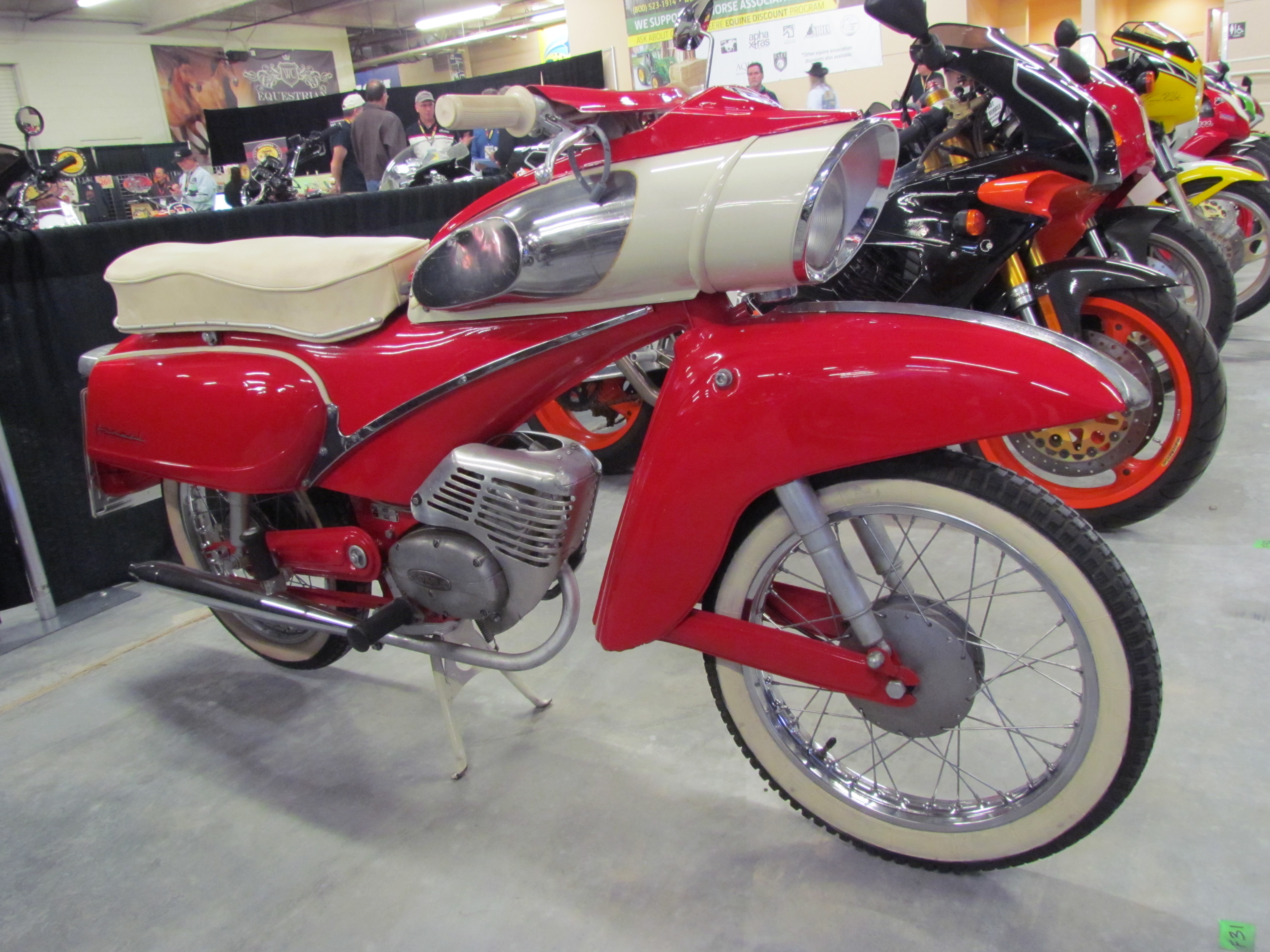 I’ve seen these bikes before at auctions and am always drawn to their modernist design. Hummel is the German word for bumblebee. The DKW Bumblebee was designed as a commuter vehicle, an alternative to the motor scooter. 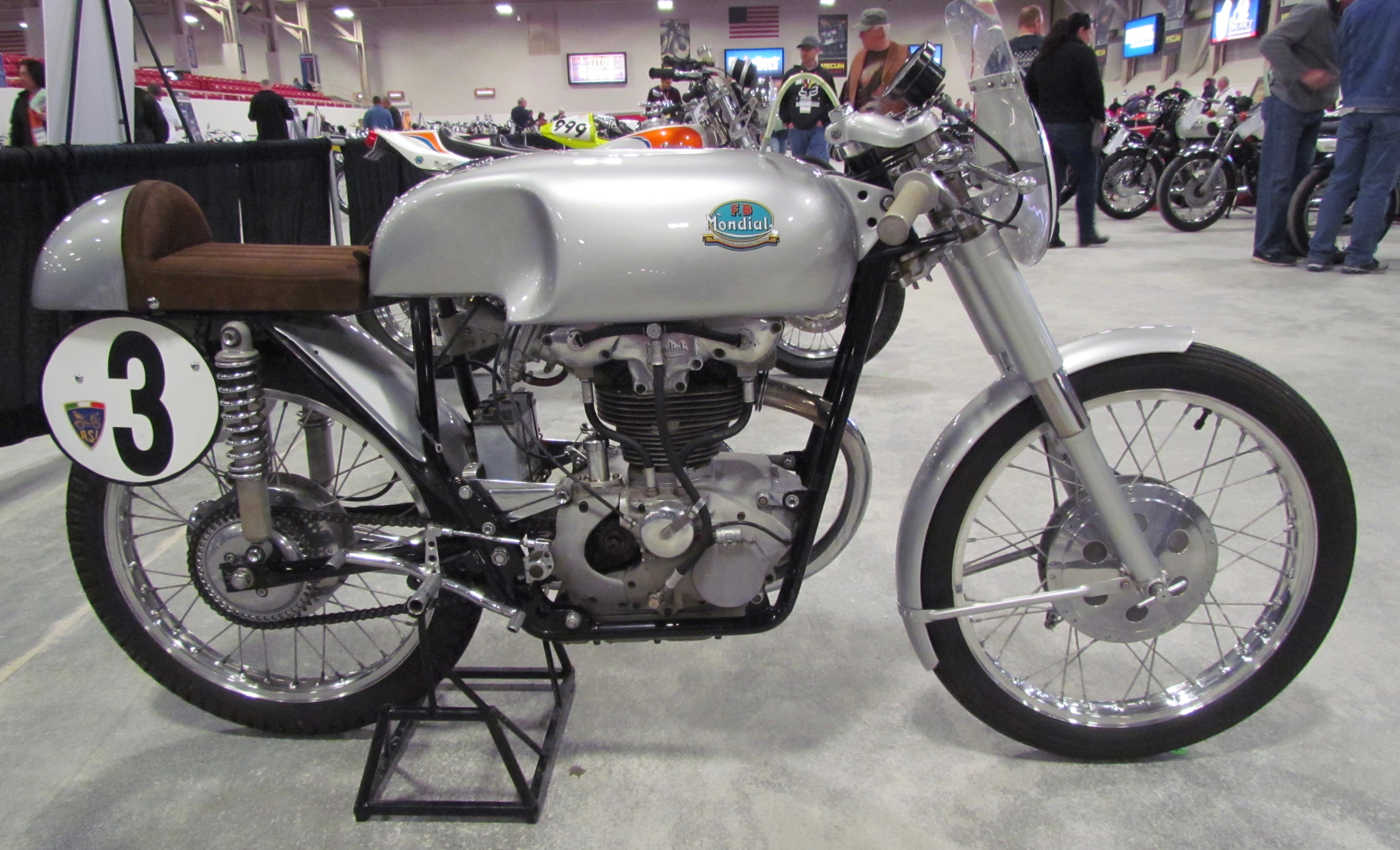 Another gorgeous design, this one a post-war racer from Italy.

1910 Excelsior Autocycle (and you’re not just buying the bike) 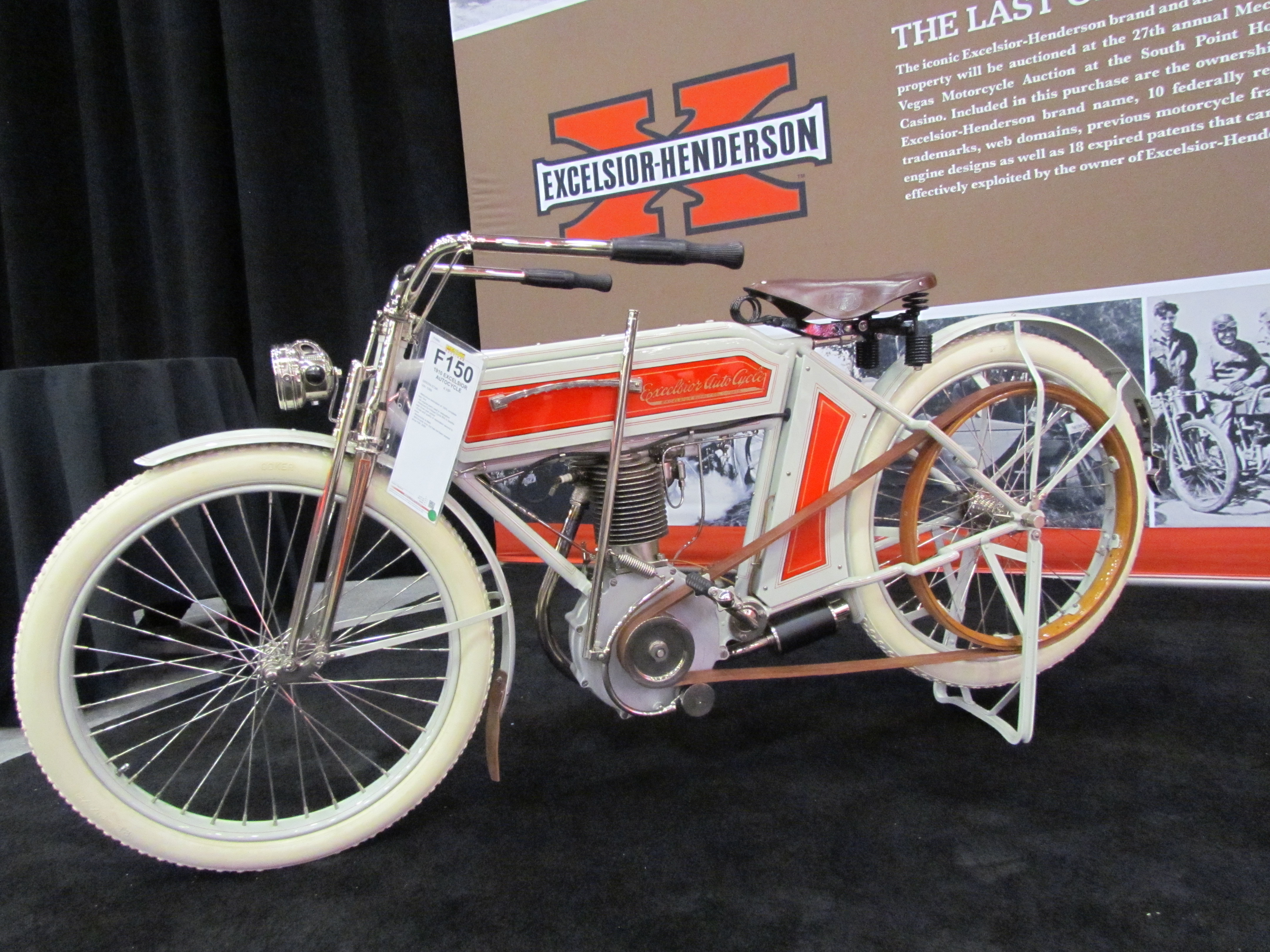 Up for bidding today is not merely another motorcycle, albeit a pretty special one, but the rights to the iconic Excelsior-Henderson brand, including 10 federal trademarks, various designs and 18 expired patents that only can be exploited by the person owning the brand. 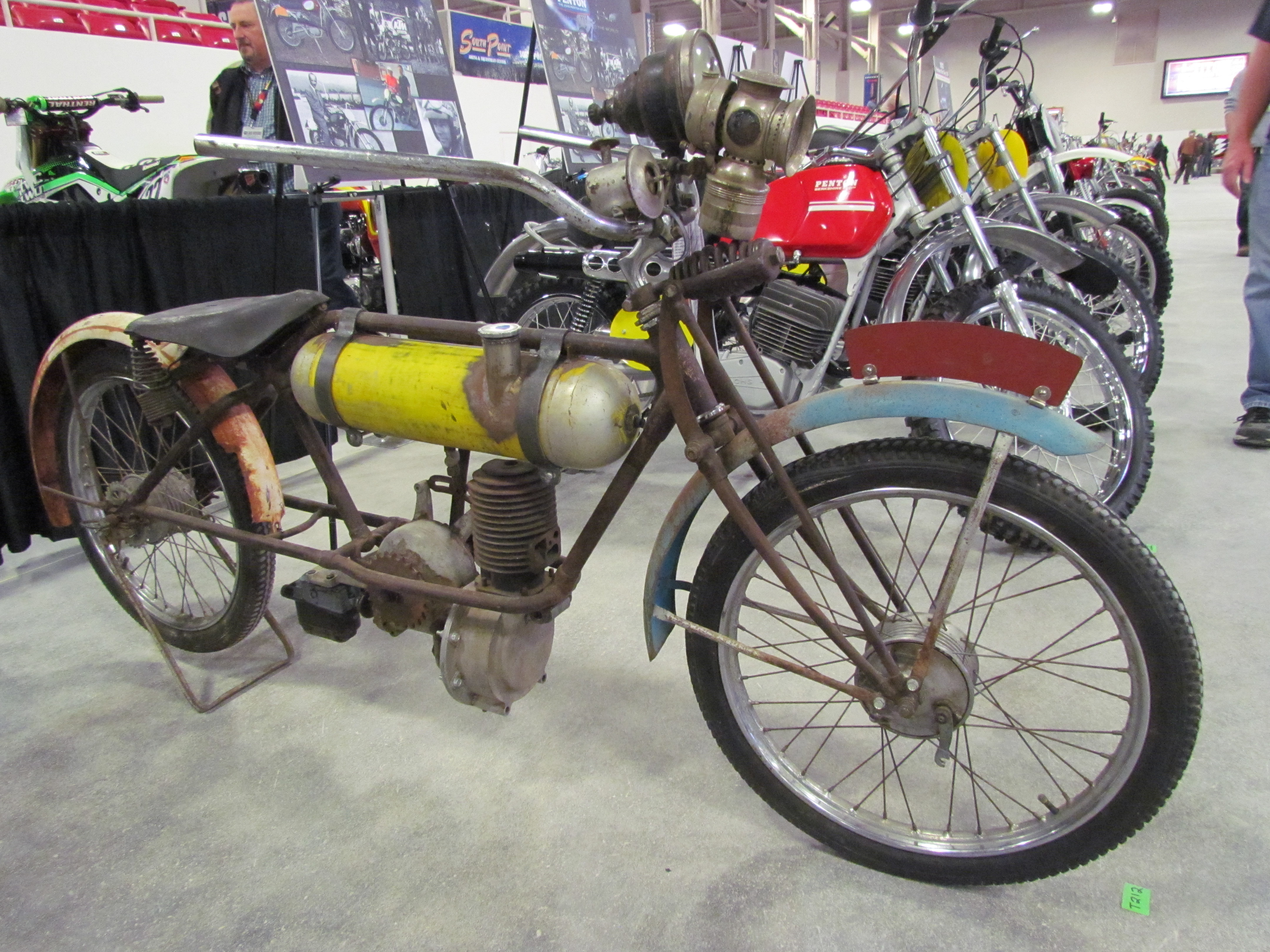 You have to love the patina of this gorgeous survivor.

Two for the campground: 1957 Moto Guzzi Truckster and 1982 Honda Motocompo

I spend as much of the summer season as possible at Cedar River Lodge, a friends-and-family campground in northern Michigan. I think these two machines would be ideal for use there. The Motocompo, which folds for compact storage, as in a car trunk, looks like a fun way to tool around on the roads within the campground while the Guzzi with a pickup bed could be used to delivering firewood and other campground chores.