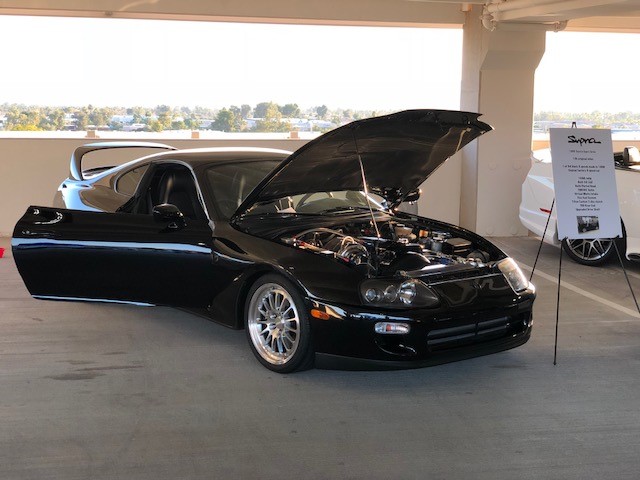 Amidst a competitive field of 163 domestics, imports and European models, a 1998 Toyota Supra was named “Best in Show” at the 3rd Annual Future Classic Show presented by ClassicCars.com and Gateway Classic Cars. Kicking off Arizona Collector Car Week, The Future Classics Car Show employs Concours-level judges, offering their expert opinions on meticulously conditioned vehicles in six categories, along with the overall “Best of Show” top honors. By popular demand, a new award was introduced this year – Best Modification.

Held under the picturesque Arizona skyline on the rooftop of the Scottsdale Quarter shopping district, the Future Classic Car Show featured vehicles from model years 1975 through 2018. Guests were offered a first-hand look at both stock and tuned Toyotas, BMWs, Lamborghinis, Mazdas, Hondas, Fords, Chevys, Mopars and more.

Encompassing three levels of the parking structure, the event generated proceeds for “Wheels For Love,” a program established by Shriners Hospital For Children, which provides custom-fitted wheelchairs and bicycles for children at Shriners Hospitals across the country.

From a crowded field of entrants, the ’98 Supra was selected “because it was the most understated, heavily customized car I have ever seen,’ explained ClassicCars.com’s East Coast editor and analyst Andy Reid. “It exemplified all a future classic is supposed to be. Though it is modified, it’s been done at a level of expertise that we’d normally see through a dealer. This attention to detail exemplifies the passion of its owner, who loved the car so much, he actually bought it back from an enthusiast that he’d sold it to previously.”

“Historically, Arizona Auction Week has catered to a more mature audience that is focused on traditional, pre-72 classic cars,” said Roger Falcione, CEO of ClasicCars.com. “The point of our event is to make enough people in the collector hobby feel that they have ownership, and expose traditional collectors to the passion and enthusiasm that a younger audience feels for these newer models. This year’s show exemplified how diverse this new sector of the hobby truly is, from a period-correct Toyota Starlet to a first-generation Corvette ZR-1 to an entire row of R35 Skylines and BMW M cars.”

The Drive with Alan Taylor: BMW Electrifying Your Experience