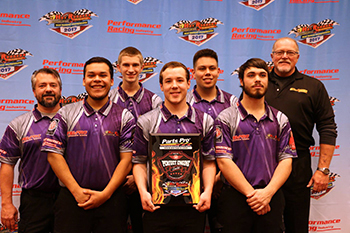 Five high school students from Oklahoma took Federal-Mogul Motorparts’ Fel-Pro® Gaskets brand back to a familiar destination -– the winner’s circle –- by claiming the 2017 national championship in the Hot Rodders of Tomorrow Engine Challenge during the recent Performance Racing Industry trade show in Indianapolis.

The annual event challenges teams to disassemble and reassemble performance engines as quickly as possible without errors, resembling the teardown and reassembly processes commonly performed between rounds of professional drag racing.

“Hot Rodders of Tomorrow is important to us because it builds awareness of the skills required for engine building among high school and trade school students and promotes hands-on learning and interest in automotive repair, with timed competition,” Ann Skrycki-Mohler, brand manager, Fel-Pro, Federal-Mogul Motorparts, was quoted in a news release.

“These students train and compete all year to gain speed and accuracy, in many cases rebuilding their engines over 100 times in practice and competition during the season.

Forty-five high school teams from across the country competed for spots in the “Elite Eight” competition at PRI, one of the world’s largest trade shows for professionals involved in building, maintaining and racing performance vehicles. Team Fel-Pro qualified for the event by finishing fourth during a semi-final round held during the Specialty Equipment Markets Association Show in Las Vegas in November. For the Fel-Pro brand, this is the second team competition win, with the first in the inaugural Hot Rodders of Tomorrow event in 2008.