This is the first 1987 Buick Grand National released by Buick as  #001 and #002 were retained by General Motors. However, even this car, #003, was retained for over a year, loaned out to nearly every car magazine imaginable for intro testing and promoting.

The car stayed in Flint and was serviced by Buick before it finally sold, to Fischer Buick in Troy, Michigan, as a “brass hat” (company official) car in 1988 with approximately 8,200 miles on its odometer.

The car was totally original, unmodified and undamaged, but it did sit idle for 20 years beginning in 1992. 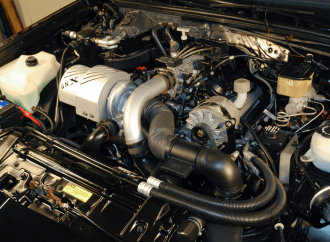 The 1987 Buick survived its long slumber quite well, but needed a complete mechanical service and very extensive cosmetic reconditioning to return it to its original 1987 press-introduction appearance. The chassis and engine compartment were returned to as-new condition while preserving the originality of this special car.

What is your favorite Mopar?