Chassis No. SFM6S001 is a historic pre-production prototype, the very first 1966 Shelby GT350 Ford Mustang built and is documented in the SAAC Shelby American World Registry.

A primary Shelby American test car used for most of the driving tests for the 1966 GT350 development program, it was also used to evaluate a vinyl roof treatment, which ultimately was not released for sale. 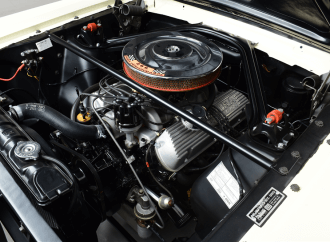 American brochures and marketing for 1966 and includes welded export brace brackets, and all the welded/filled holes in the body panels for the standard Mustang emblems and body moldings that were removed during the Mustang’s conversion into the first ’66 GT350.