For two decades, Mitch Silver staged a series of popular, low-key collector car auctions in Arizona, most recently with three of them a year — one as part of Arizona Auction Week in January, the others a fall sale and another just as the snowbirds were ready to fly home for the summer.

The cars on the docket were primarily drivers, and part of Silver’s business plan, at least for the fall and spring sales, was aimed at those snowbirds — buy a collector car as you arrive in Arizona, drive it there all winter, and then sell it in the spring.

But Silver’s own home is in Spokane, Washington, and a few months ago he sold his Arizona sales to a group that calls the Phoenix/Scottsdale area home. The principal of the new Silver Auctions Arizona is Emmitt Rice, former new car dealership group owner-turned-collector car dealer who resides half the year back in Amarillo, Texas, but the other half in Arizona. Joining Rice is long-time Leake Auction executive Andy Stone.

Their mission was to keep the down-home/hometown feel of what Silver established, but to upgrade the vehicle selection and to modernize the auction operations, for which they hired, among others, former Barrett-Jackson operations manager Jason Rose.

The inaugural Silver Auctions Arizona started Friday and runs through Saturday evening at the Wekopa resort and conference center at the Fort McDowell casino facility in Fountain Hills, just east of Scottsdale.

The docket for the auction includes 225 vehicles. I spent Friday morning walking among those cars and found a bunch I’d eagerly pursue were I a budding collector. What I’m sharing here are only those that will cross the block on Saturday; chances are that by the time you read this, the Friday cars already will be sold. 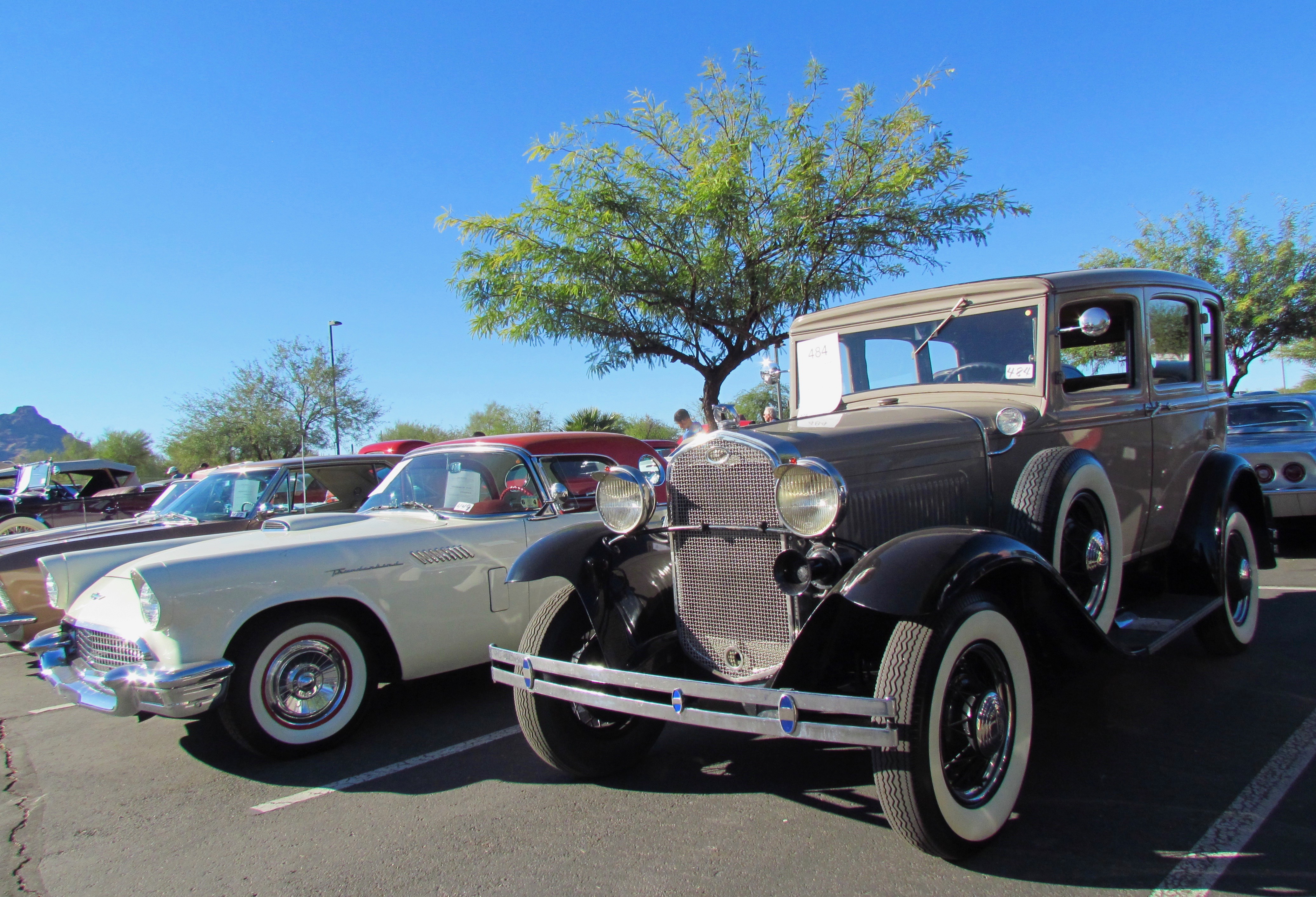 I don’t recall seeing a ’57 T’bird in white (seems to me they’re always painted turquoise), but this one with its removable red hardtop and two-tone red-and-white interior certainly caught my eye. And parked right beside it was one of its ancestors, a Murray-bodied 1931 Model A town sedan. This last-year for the A car was built at Ford’s Ontario, Canada, assembly plant, which means it was put together with special fasteners, screws and other assembly techniques not used at Ford’s U.S. plants. 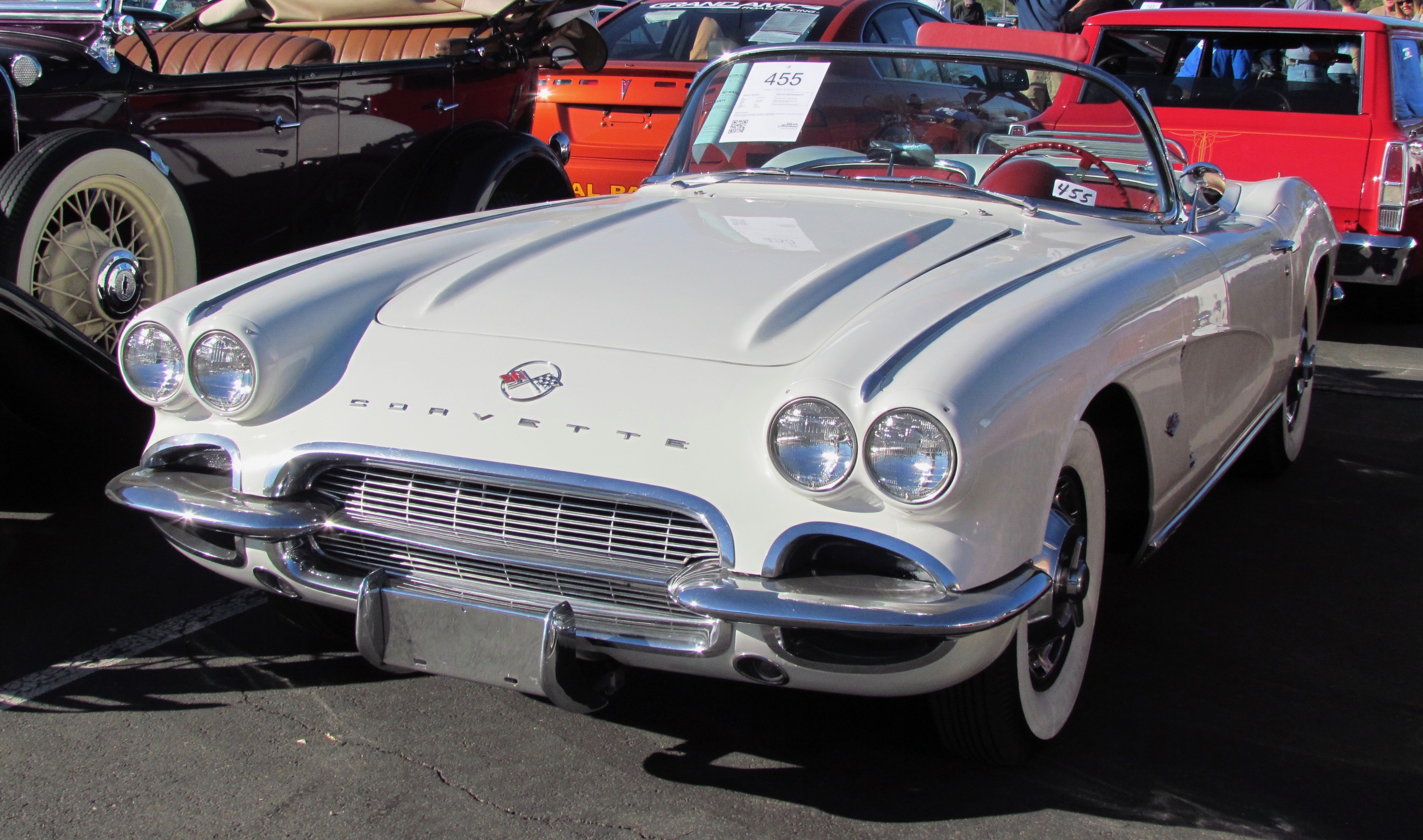 If you’re a bowtie-type of car person, here’s another white, mid-century American sports car with a red interior. This Corvette has a 327cid V8 engine, 4-speed manual transmission, and has been mildly updated with Vintage Air (and heat) and a Wonder Bar classic audio with AM/FM and Bluetooth. 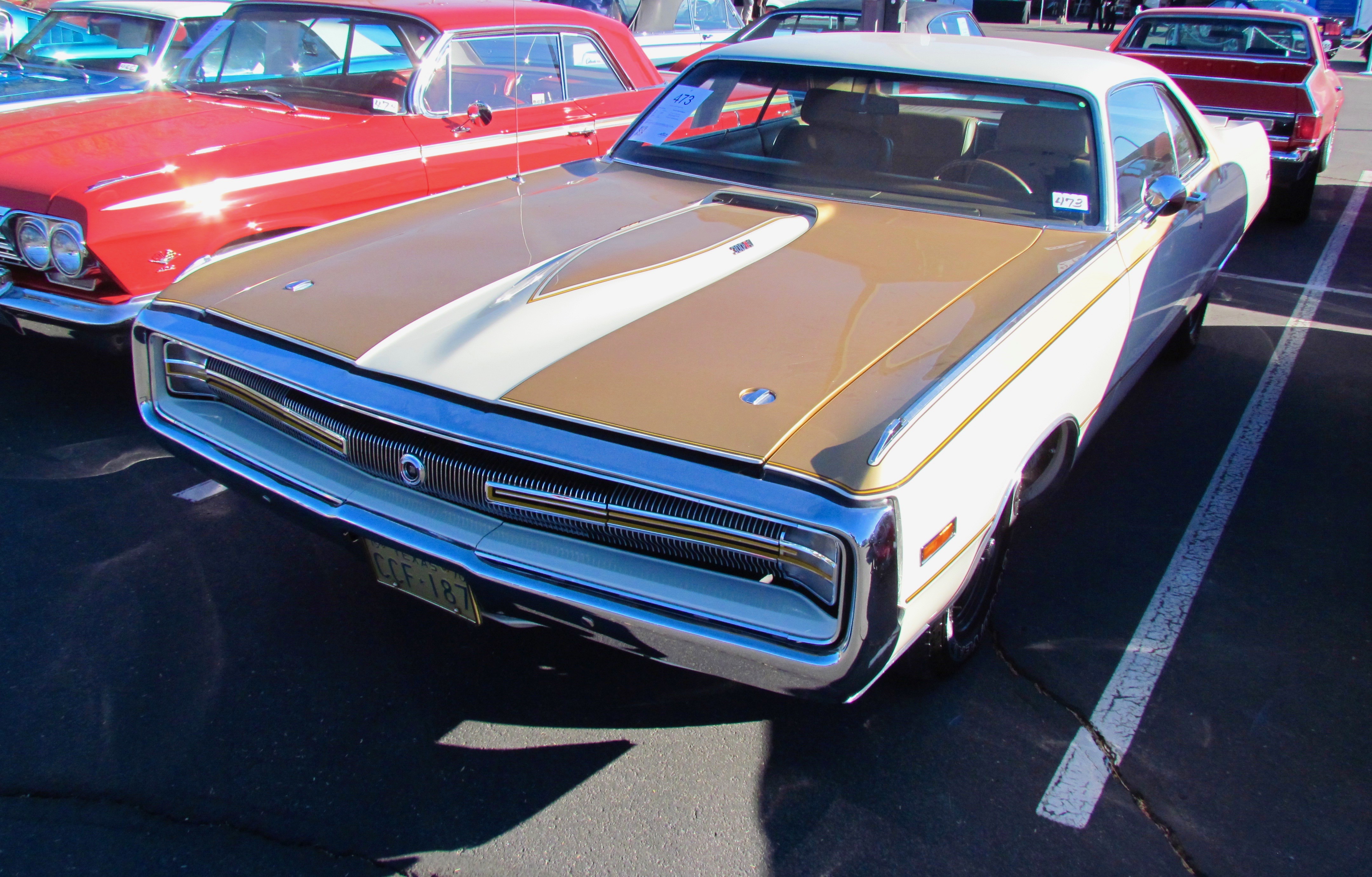 We’re all familiar with Hurst Oldsmobiles, but this is one of only 500 Hurst Chrysler 300s produced. Its original engine has been rebuilt, bored 30 over and with high-compression aluminum pistons, Hooker ceramic headers, Mopar Performance parts that boost the compression ratio to 11:1, and with Flowmaster exhaust. 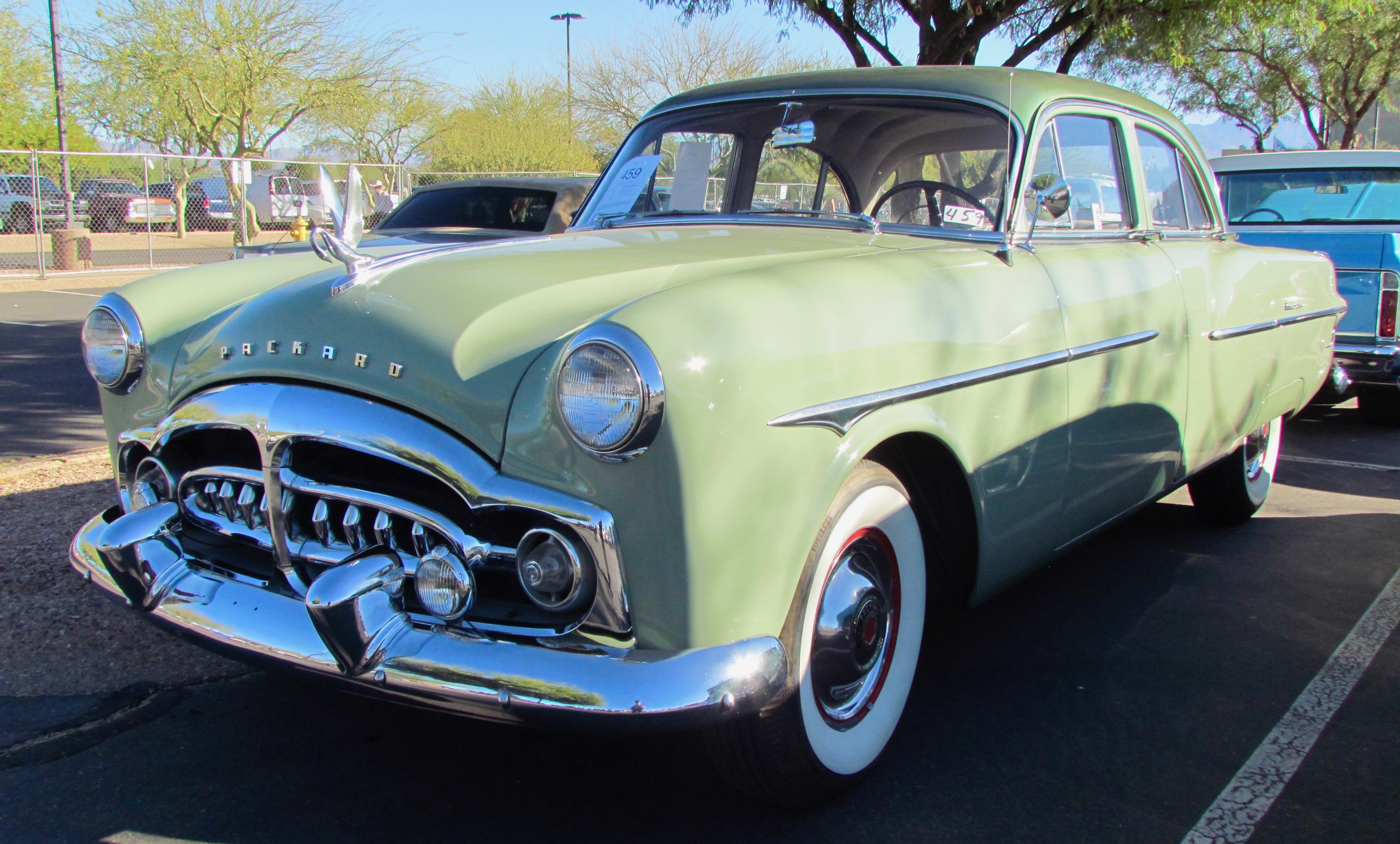 I wasn’t the only one drawn to this popular pale-green Packard. Turns out the car formerly was owned by the founder of the Packard International Motor Car Club and the consignor is president of the club’s Arizona Region chapter. The car has a 327cid straight-8 engine, 3-speed manual. It was repainted but its interior is original and also in the mint-green color. 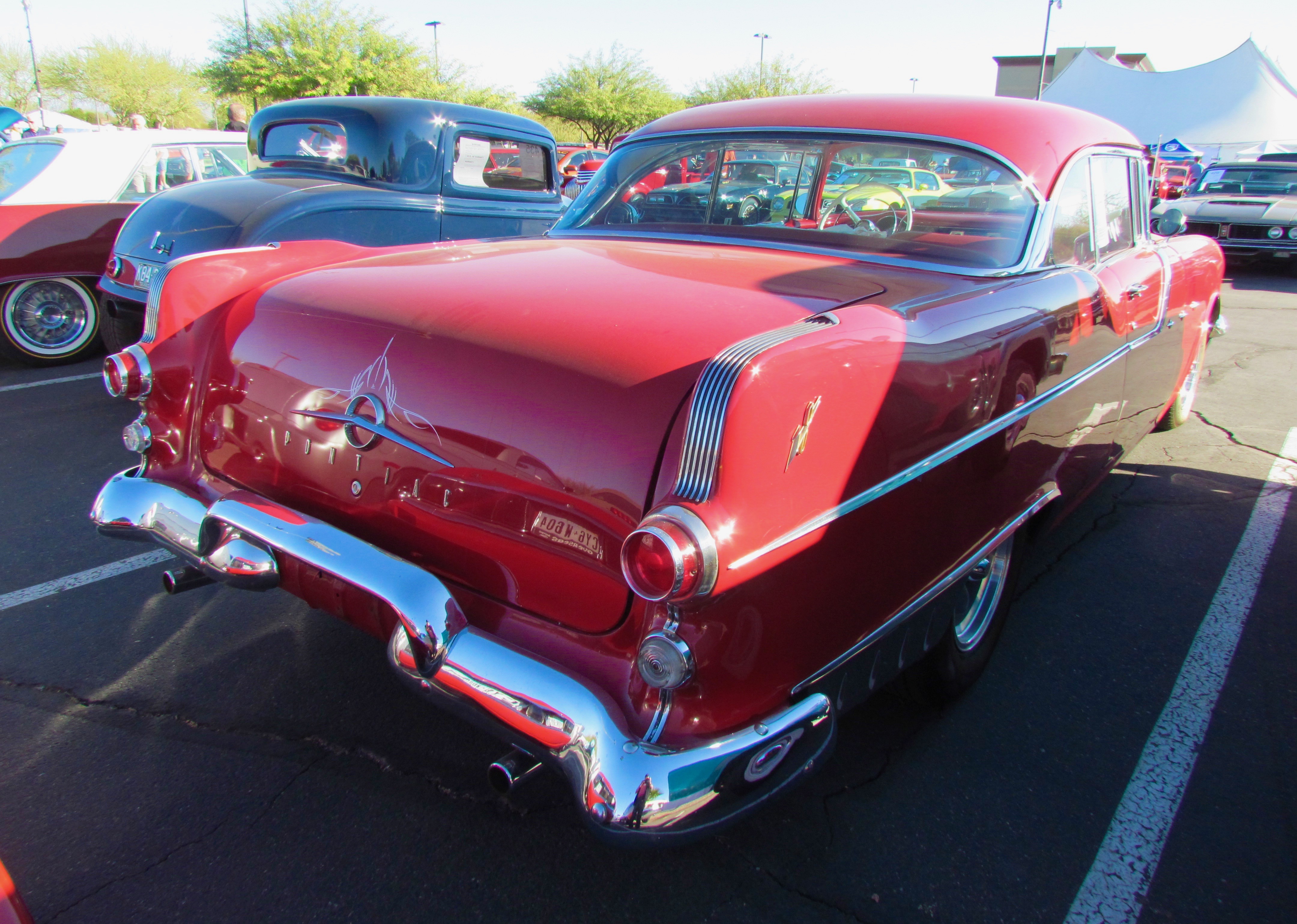 Once it’s cleaned up for its trip across the block, this Pontiac will be stunning. It once appeared on the cover of Cars & Parts magazine, has a 350cid GM crate V8 under its hood, linked to a 700R4 transmission. Its restoration also included the installation of modern air conditioning. 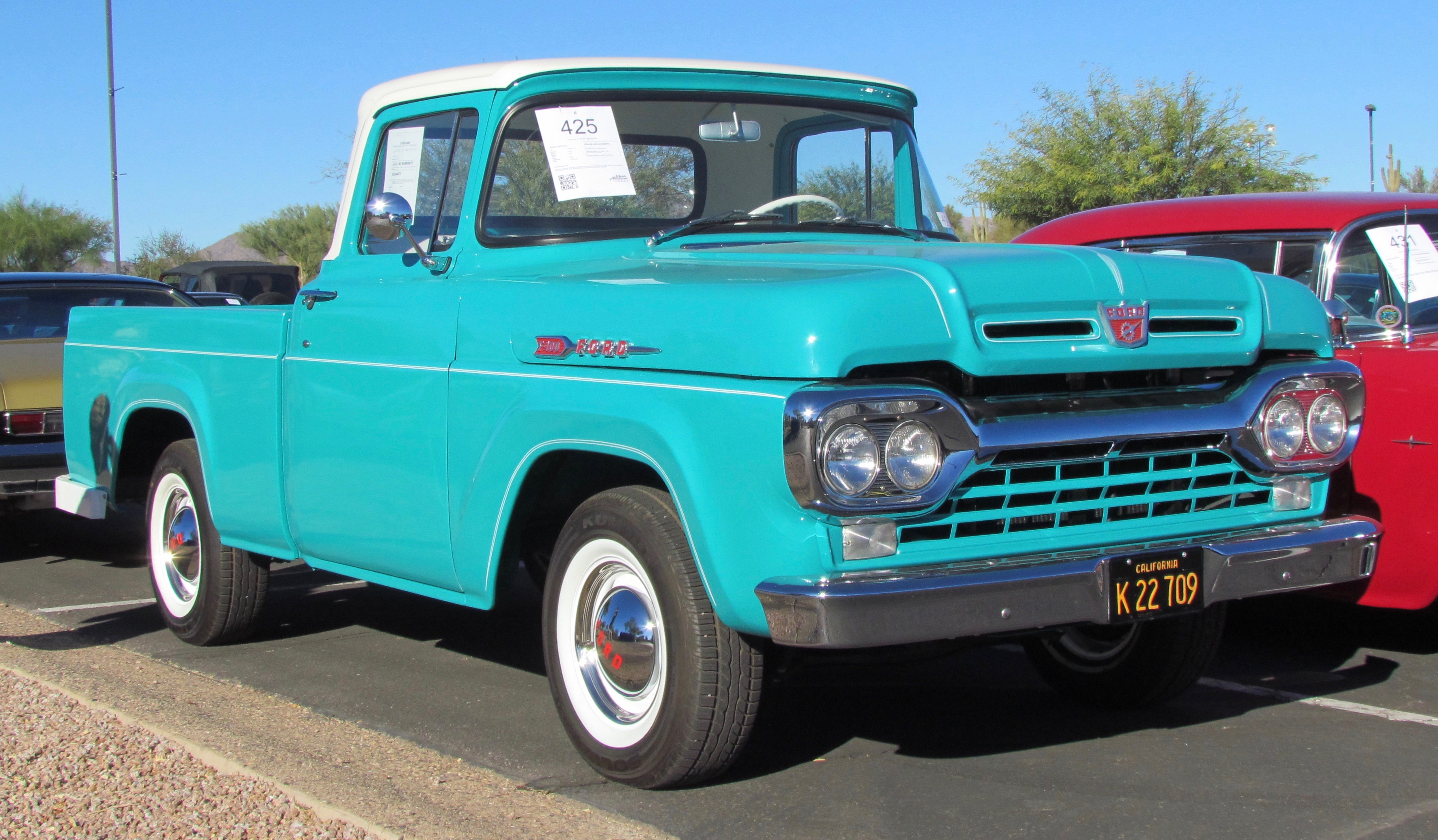 Nicely restored pickup truck with 223cid straight-6 and 4-speed manual, and with a new interior. 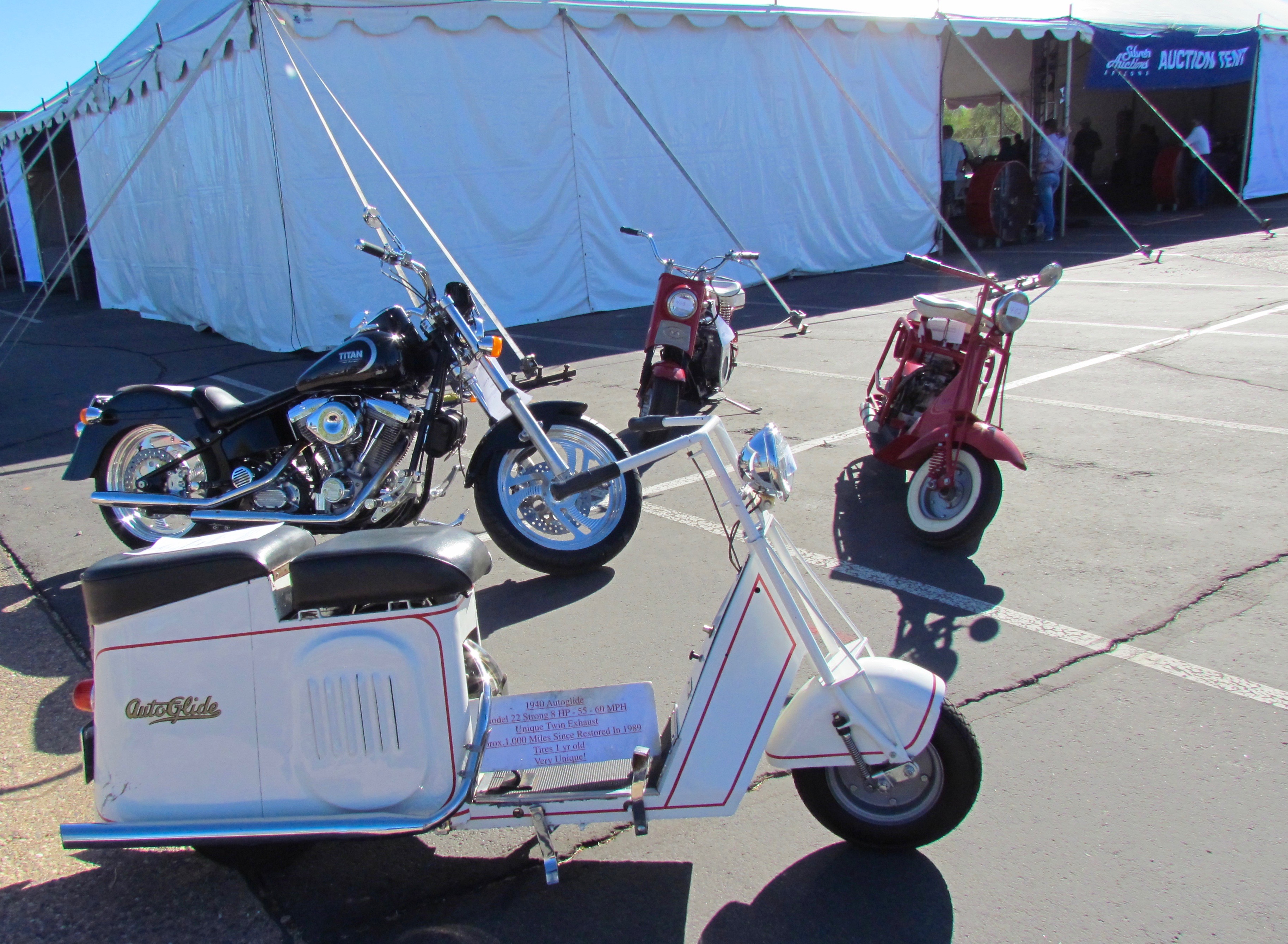 The auction includes four two-wheelers. The one closest to the camera is a 1940 Autoglide that looks like a lot of fun for cruising around town. It’s a Model 22 with a “strong” 8-horsepower engine with unique twin exhaust. It’s only traveled about 1,000 miles since being restored in 1989, but rides on tires only a year old. 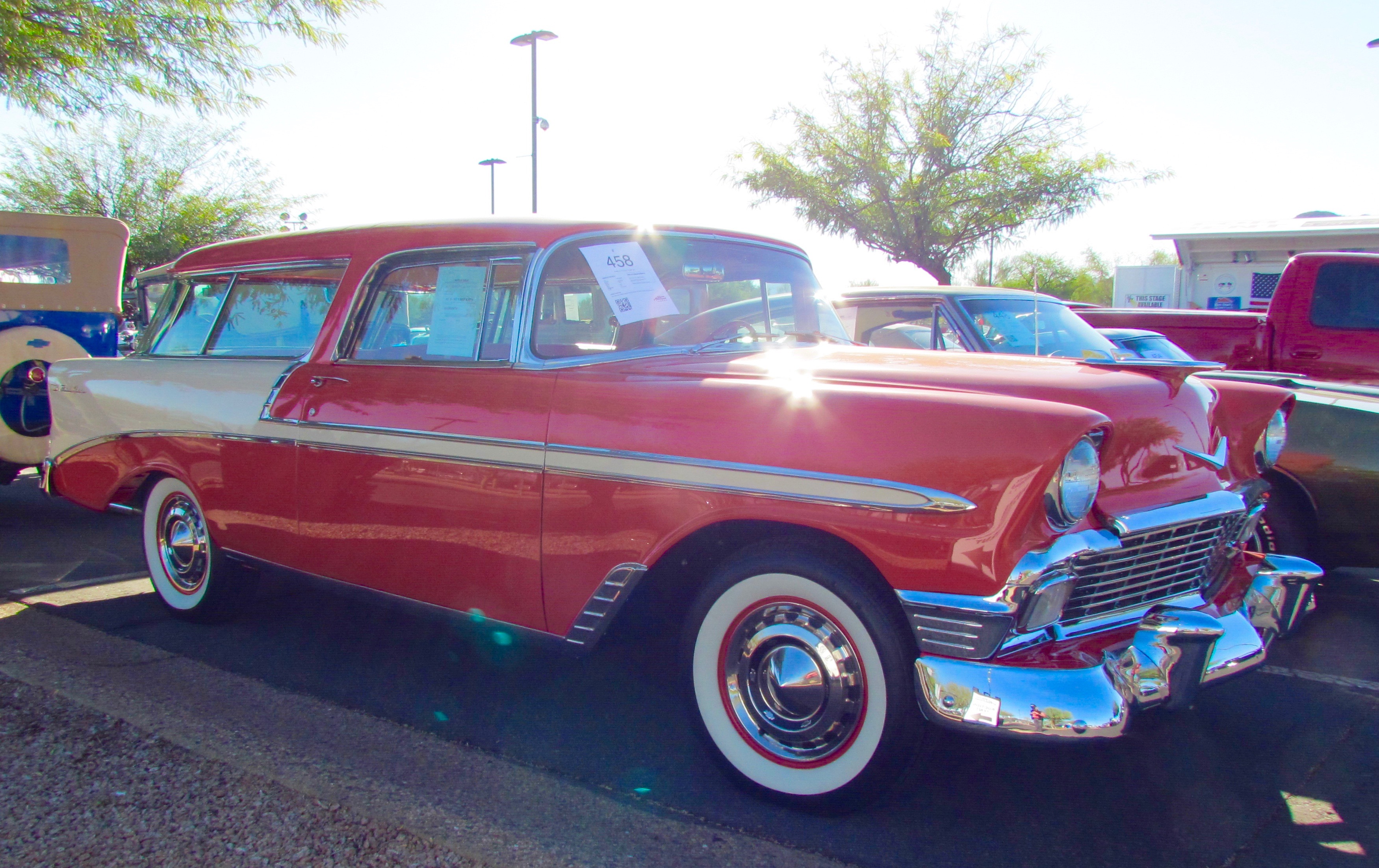 This classic two-door Chevrolet station wagon is orange and creme inside and out. 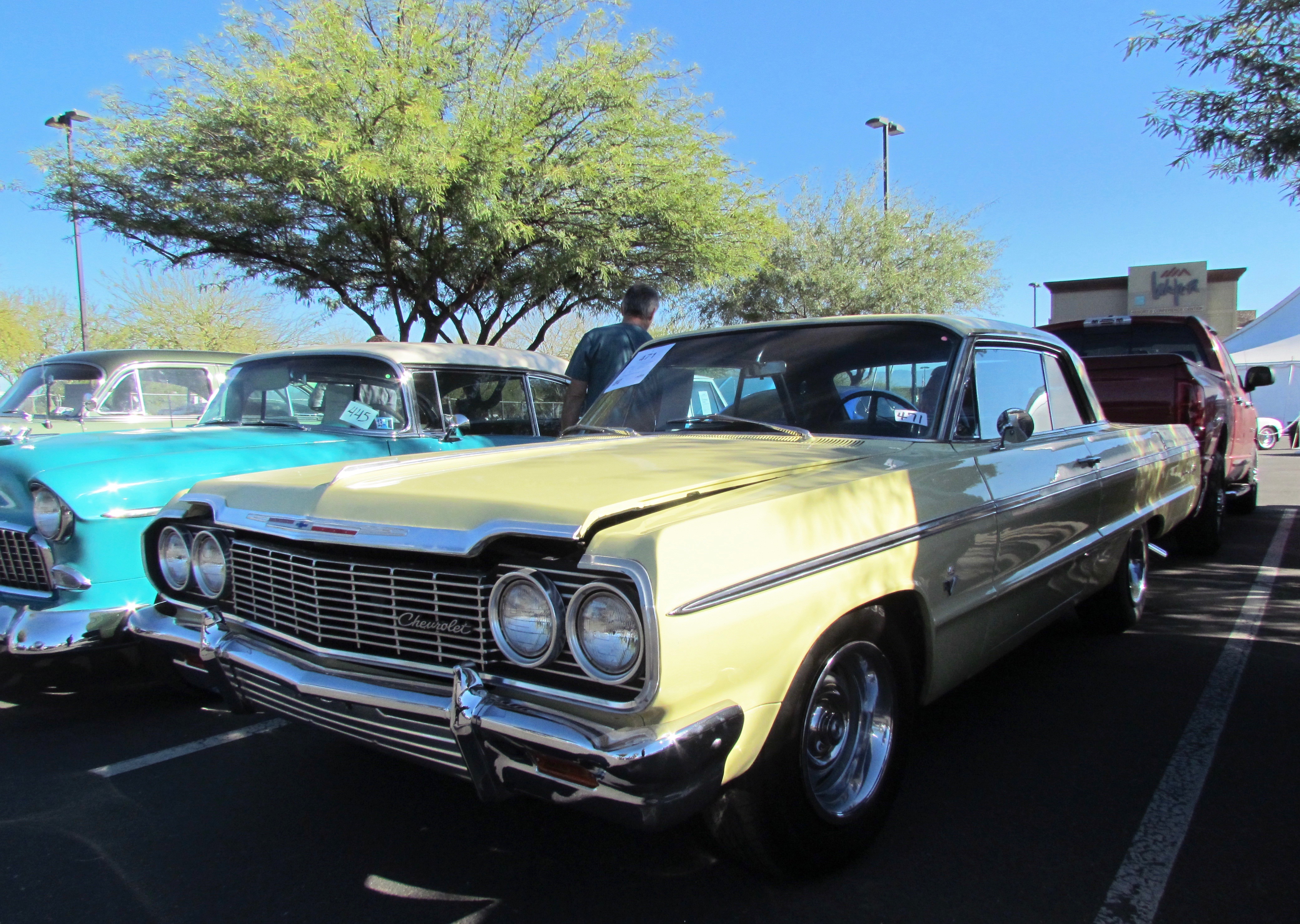 Remember the song about “she’s real fine, my 409!” Well, this Super Sport has a rebuilt 409 under its hood and those 425 horses are linked to a Muncie 4-speed transmission. Vintage Air has been added, but the coupe retains its original interior.