Getting a car built and ready for display at the annual SEMA Show is a major undertaking, usually a year-long effort that can involve attaching the final bits inside the trailer as it rolls into the parking lot of the Las Vegas Convention Center.

And yet, both last year and this, the Ring brothers, or Ringbrothers as their logo puts it, brought not just one or even two three brand-new and unique vehicles to the show, but three of them! (Accuracy note: In 2016 they actually had four vehicles at the show, one of them not quite a brand-new build but a radically and recently restored Winnebago motor home turned man cave.)

One reason the Mike and Jim get so much done each year is that they are not distracted by allowing a “reality” television show to invade their shop in central Wisconsin. They’ve been pursued for such a program, but disdain the artificially exaggerated conflict that is part of such presentations and won’t even listen to any such proposals.

And it’s not that this set of brothers doesn’t have the usual sort of sibling disagreements, but the Rings have too much work to do to be bothered by TV cameras and crew. Besides, they’d rather please their customers than any television producer or program director.

Besides, it’s unlikely that any video crew with all their gear could have kept up with the Rings this past week as they hustled from one car unveiling to the next, especially with one of their cars debuting way over in the Prestone display in the sprawling convention center’s south hall, another in central hall, and the other in the BASF Glasurit showcase up in the north hall. 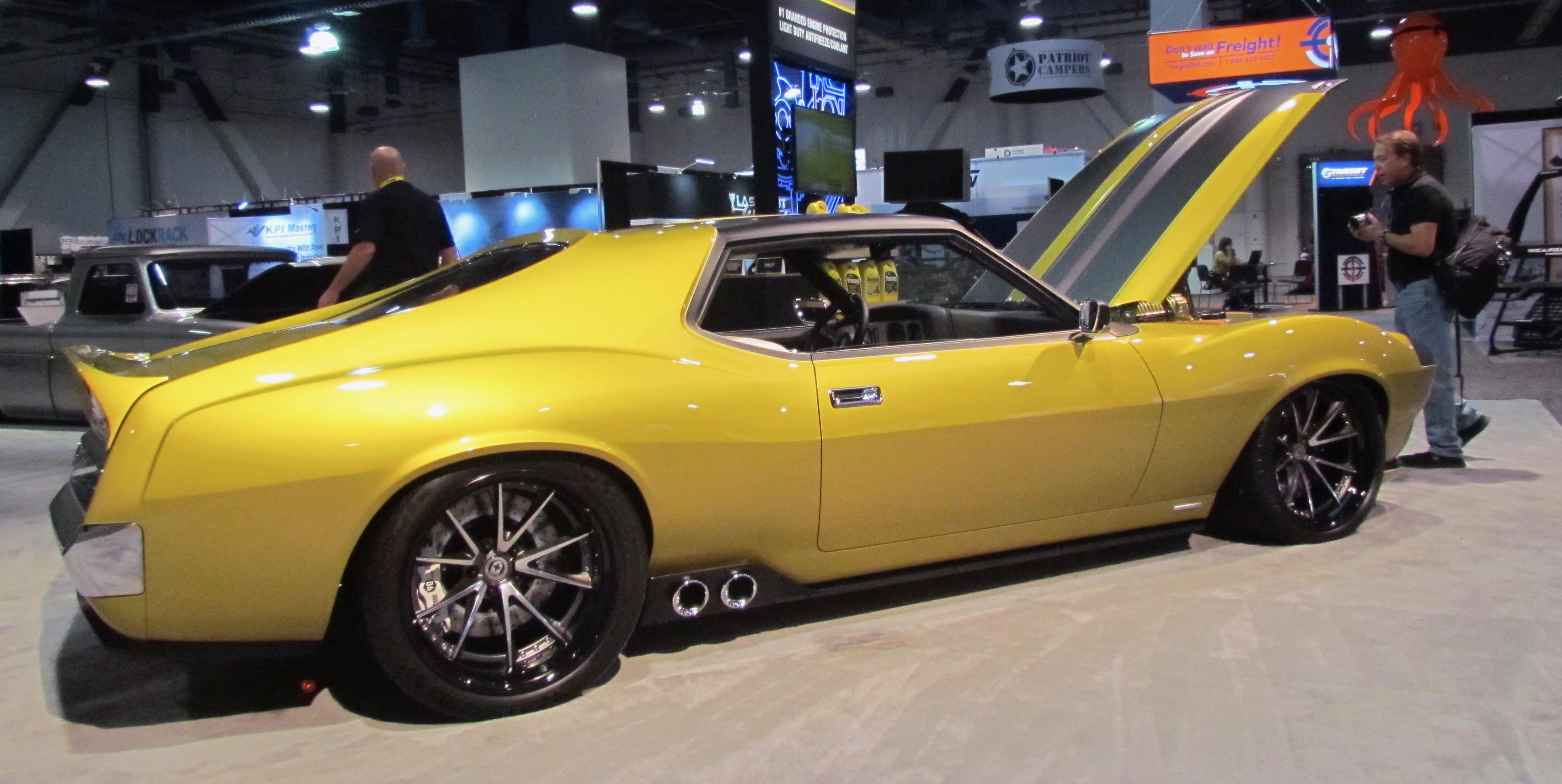 The car unveiled at the Prestone booth was the Defiant!, a much-modified 1972 AMX Javelin. Not only does the car offer 1,000 horsepower from its supercharged Wegner Motorsports 6.2-liter Mopar Hellcat V8 engine, but many of the car’s body components were fashioned from carbon fiber, and the wheelbase was extended 6.5 inches. Among other custom features, the engine is underpinned by a Detroit Speed hydroformed front subframe. The stunning yellow color on the car is BASF Glasurit’s Jalop Gold.

Unveiled on the BASF Glasurit stand, in a shade called “Green on the Other Side,” was Defector, a 1969 Dodge Charger that retains the original styling cues but with contemporary twists that included shortening the car’s rear end by two inches while extending the wheelbase by three inches, lowering and extending the rear quarter panels, resculpting wheel wells to show off custom HRE wheels, and mounting the rear section of the car on another hydroformed subframe.

There also were modifications inside and up front, where a 6.4-liter Wegner Motorsports Hemi V8 is housed.

Meanwhile, at the Ringbrothers’ own stand, they took the wraps off what figures to be the most beloved of their 2017 SEMA projects. Its name is Clem 101. It not only is the Rings’ first pickup-truck project but was built to serve the brothers as their parts-running shop truck.

Clem started with a rusty 1954 Ford F100, a local Wisconsin farm truck, that they updated with a ’56 Ford cab and with a custom-built bed with narrowed wheel openings, but with fenders three inches wider than those Ford produced back in the day.

The wheelbase was stretched seven inches up front, using a custom Ford Crown Victoria subframe that had to be narrowed five inches to fit on the ancient pickup application. Front fenders were extended. Between them sits a 415 horsepower, fuel-injected 5.0-liter Ford Coyote crate engine.

So what’s next for the Ringbrothers? You can be sure they’ll be back with more new cars at the 2018 SEMA Show.

In the meantime, Mike Ring is involved in a very special, very personal restoration project. He and his daughter, a 20-year-old college design major, are working together, dad and daughter, to restore for her a vintage BMW 2002 tii.

A Dad and Daughter car restoration — now that’s a build that would make for wonderful television.

Ringbrothers Kills It at SEMA 2022