Because of road construction in Brixton, South London, the route for the London to Brighton Veteran Car Run is being shifted to the west for the event November 5. Organizers say this is the first significant route change in 60 years.

“We work closely with Transport for London, which has advised us that road works and lane closures in Brixton are likely to cause tailbacks and problems for the cars, the youngest of which is 112 years old,” clerk of the course Neil Carr-Jones was quoted in the news release announcing the route change.

“In March this year, we tested a couple of other routes out of London before settling on the A3/A24 through South London and then the A217 towards Reigate,” he added. “We tried to replicate typical Run conditions and set off shortly after dawn on a Sunday morning using a veteran car to make the trip as realistic as possible.

“Although this alternative route will add about four miles to the overall length of the journey, we feel it will be easier on the cars and, thanks to greater stretches of dual carriageway along the A217, modern traffic and the faster veterans will be able to overtake the slower cars more easily.”

More than 400 pre-1905 cars are scheduled to leave Hyde Park at sunrise and will pass such landmarks as Hyde Park Corner, Buckingham Palace, Horseguards and Big Ben before crossing Westminster Bridge.

However, the cars will then depart London via Kennington, Clapham and Morden, passing through Balham – described by Peter Sellers as “Bal-Ham, Gateway to the South” in a 1940s BBC radio comedy sketch.

After Morden, the revised route by-passes Sutton on the A217 to Banstead, Tadworth and Reigate before re-joining the traditional route at Redhill, where it will follow the A23 to Horley and the midway break at Crawley.

“A special viewing area in Crawley High Street has been established for the thousands of spectators who regularly turn out to support the hardy crews making their annual pilgrimage from capital to coast,” the organizers said.

From Crawley, the route heads to Brighton via Pease Pottage, Staplefield, Cuckfield, Ansty, Burgess Hill, Hassocks and Clayton where it joins the A23 for the run into the finish at Madeira Drive.

The last time the Run visited Reigate was 1954. Since then, it has been routed via Streatham, Croydon and Coulsdon on its way to Crawley.

“As well as being easier on the cars, we hope the new route will attract even more spectators along the way with excellent viewing opportunities along Clapham Common and the A24 corridor through South London,” Carr-Jones said.

Organized by the Royal Automobile Club, the veteran car run starts with the ceremonial tearing of a red flag to celebrate the end of the Locomotives on the Highway Act of 1896, aka the Red Flag Act, which required motorcars to be preceded by a man walking and holding a red warning flag. 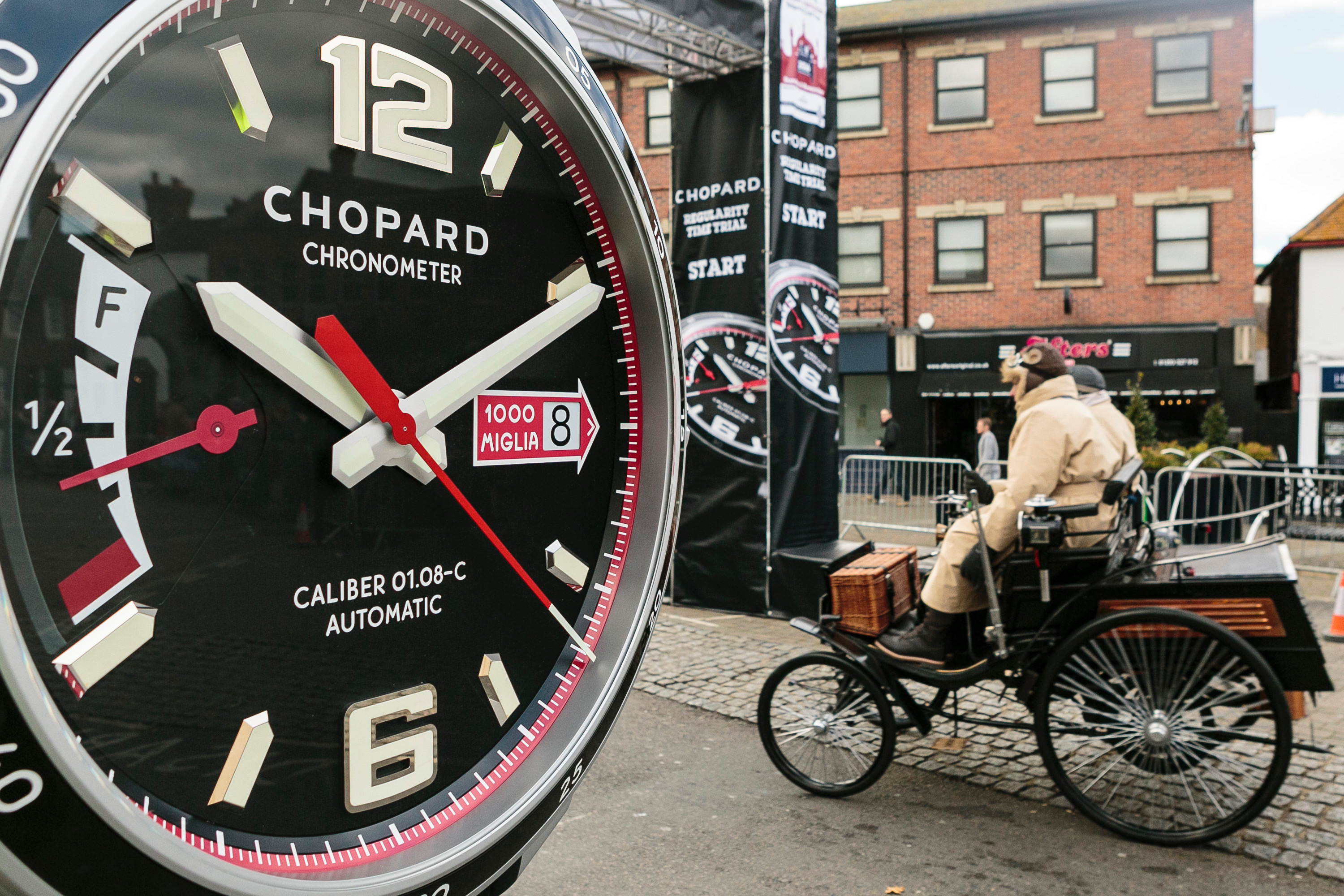 The London to Brighton Veteran Car Run is not a race — racing on public roads is illegal in the UK — but since 2014, there has been a competitive element. The Chopard Regularity Time Trial has drawn 75 percent of the 2018 starting field for a test of “the wits of the drivers and their passengers against the sands of time,” Chopard said in its news release, which adds that there’s a Chopard Mille Miglia chronograph awaiting the trial winner.

The trail starts midway through the London to Brighton drive. Participants regroup at the Crawley half-way checkpoint and the time trial starts on Crawley High Street and runs for 13 miles to Burgess Hill in Sussex.

Each team predicts its average speed for that 13-mile section. The driver closest to the car’s nominated speed wins the watch. Of course, traffic, weather and mechanical ills effecting century-old vehicles can play havoc with such predictions.

“Although there’s only 12 years between the youngest and oldest cars on the event, engineering development made rapid progress and the difference in the performance of these vehicles is huge,” Peter Read, chairman of the Royal Automobile Club’s motoring committee, said in the news release. “By setting an average speed over a set distance, the Chopard Regularity Time Trial equalizes that difference and instead rewards the skills of the person behind the wheel… or the tiller.”

Registration is open for the Orange Blossom Tour, a multi-day driving event that begins the Amelia Island Concours d’Elegance week in 2018.

The tour, staged by Classic Motorsports magazine and led by Tim and Margie Suddard, begins Sunday, March 4 and runs through Thursday, March 8. In between, the Suddard’s “show off Florida’s finest back roads and destinations — those hidden gems known only to longterm residents,” it says on the event website.

The route actually starts and ends at the Jekyll Island Club in southern Georgia. Monday, after a ferry ride across the St. Johns River, there’s a private tour of car collection and drives on scenic beach roads on the way to St. Augustine. On Tuesday, the route takes Highway A1A through oak hammocks and into the Ocala Nationals Forest before another visit to another car collection.

After a night in Gainesville, the tour visits the home of The Yearling author Marjorie Kinnan Rawlings before heading to Tallahassee and yet another car collection. The final day includes a plantation visit and a drive through the Okefenokee Swamp.

Those registering before November 1 receive an early bird discount.