We go hunting for the first time Chevrolet was called Chevy

“Drove my Chevy to the levy but the levy was dry,
and good old boys were drinking whiskey and rye,
singing this’ll be the day that I die.”

McLean sang that song publicly for the first time in 1971. But the word chivy, or chivvy, as it sometimes was spelled, harkens back a few centuries to a term from the British Isles for a chase or a hunt; etymologists tracing the word to the 1388 British-Scottish battle of Otterburn.

More recently, Chevy Chase has been used to describe the act of chasing a chicken around a farmyard, and was the name given to a town in Maryland (though it started as Chevy Chace, chace being a hunting ground), and to a comedian/actor whose parents named him Cornelius Crane Chase. Chevys, plural, also is the name of a group of restaurants that serve Mexican food in Southern California.

But mentioned the word “Chevy” to most anyone and the first thought is about an automobile. Chevy, the popular short form of Chevrolet, remains true despite an ill-fated effort in 2010 by a couple of people in the General Motors hierarchy to ban the use of the term Chevy, insisting that employees always refer to the brand as Chevrolet.

The execs were correct that the official brand name is Chevrolet, derived from the Chevrolet brothers — Swiss-born racers and car builders Louis, Gaston and Arthur — who cashed in on their fame by selling the rights to their name to William Crapo Durant, who launched Chevrolet as one of the brands of his recently regained General Motors company.

The brothers Chevrolet went on to start their own car company, Frontenac, but built only a few, highly advanced vehicles before focusing primarily on racing — Frontenacs won the Indianapolis 500 in 1920 and 1921 — and on producing hot-rod parts for Model T Fords. So-called Fronty-Fords were very popular on America’s early auto racing circuits.

I’m not sure what triggered the thought, but recently while was flying from Detroit to Phoenix I got to wondering about automotive nicknames — Vdub, Merc (applied to Mercury here and to Mercedes in Europe), Bimmer (and/or Beemer, though I grew up thinking Bimmers were cars and Beemers were motorcycles) and Duesie, but especially Chevy.

I wondered: When was the first time that Chevrolets were called Chevys? Perhaps, I thought, Chevy was used around the race tracks in conjunction with the Chevrolet brothers. Might they have been nicknamed “Chevy”?

So I contacted Donald Davidson, historian at the Indianapolis Motor Speedway, but he said he’s never found any reference to any of the brothers ever being called Chevy.

I also contacted Christo Datini, historian at the GM Heritage Center, and asked if he might know when the first time Chevrolet automobiles were called Chevys.

He turned to Don Williams, Ohio resident and former president of the Vintage Chevrolet Club of America (not the head of the Blackhawk Collection), who said this question has come up among club members. Williams suggested that Chevy was in common public usage in the 1930s, and noted that perhaps the first instance of formal use of the term by GM occurred in 1962 with the launch of the Chevy II compact car.

He also suggested that Datini examine the heritage center’s archives of Chevrolet advertising to see if there might be any earlier references. 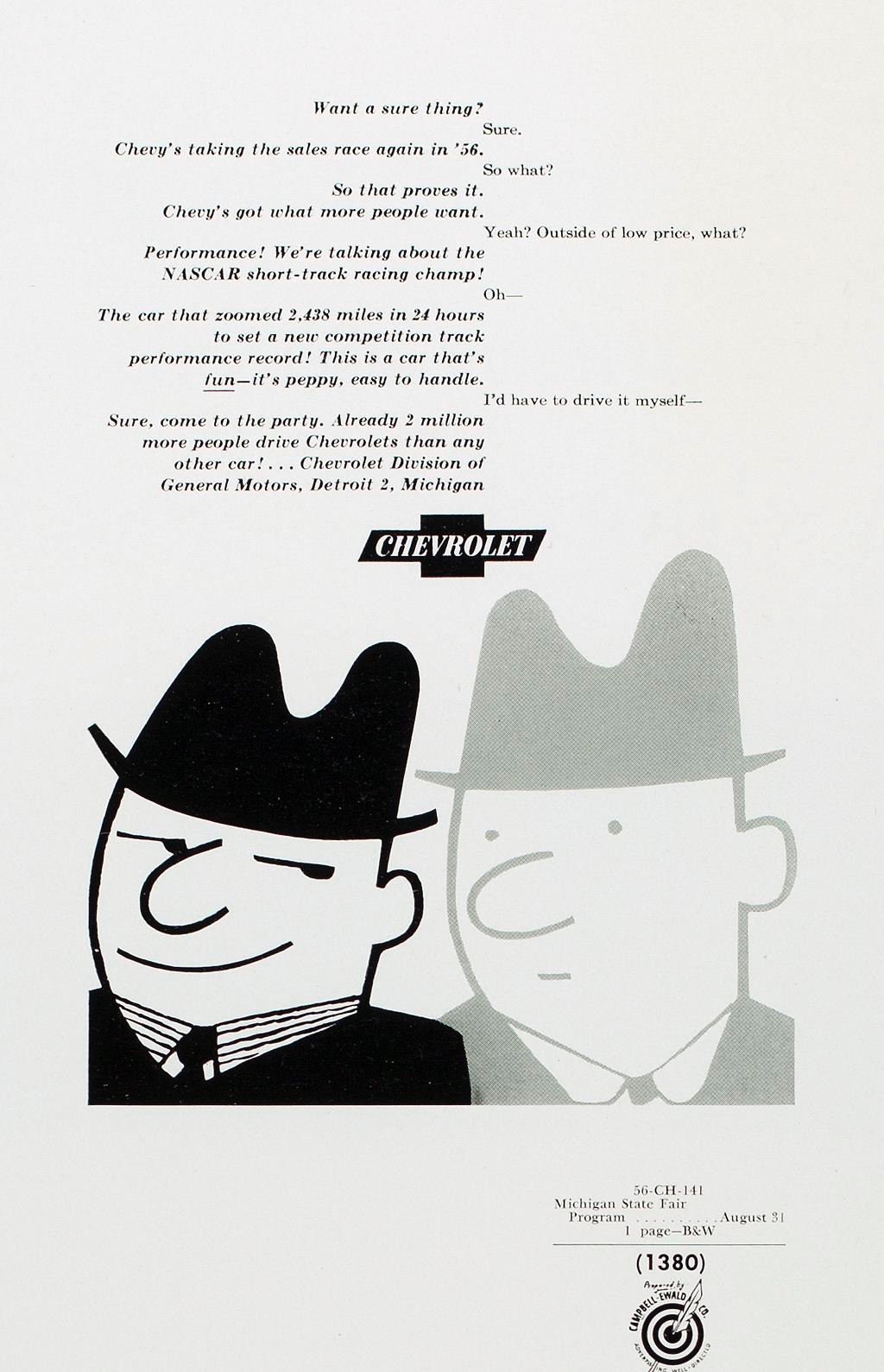 Records at the GM Heritage Center show the earliest official reference in advertising done in 1955 in preparation for the launch of The Chevy Show on NBC television in the fall of 1956. It also was in 1956 that the term Chevy was first used in Chevrolet advertising for its automobiles.

The Chevy Show starred Dinah Shore, who reminded viewers to See the USA in your Chevrolet.

While that opening lyric remains famous, the second verse is noteworthy on several counts:

On a highway, or a road along the levee,
Performance is sweeter
Nothing can beat her
Life is completer in a Chevy.

Seems Don McLean wasn’t the first to write and sing about driving along the levee in a Chevy. But there are limited words that rhyme with Chevy, and who would drive alongside a heavy or a bevy?

The song — lyrics and music — reportedly were created in 1949 by Leo Corday and Leon Carr as an advertising jingle for Chevrolet, and first was sung by co-hosts Peter Lind Hayes and Mary Healy on the Inside U.S.A. with Chevrolet TV show that aired one season on CBS during the fall of 1949 through the spring of 1950.

Seems that lyricists like Chevys. Since Corday and Carr and McLean, Bob Seger, Eric Clapton, Elton John, Taylor Swift, Alan Jackson, Samy Johns, Motley Crue, the Beastie Boys, Rick Ross (with Dre) and Snoop Dogg have been among those singing about “Chevy” in their songs. 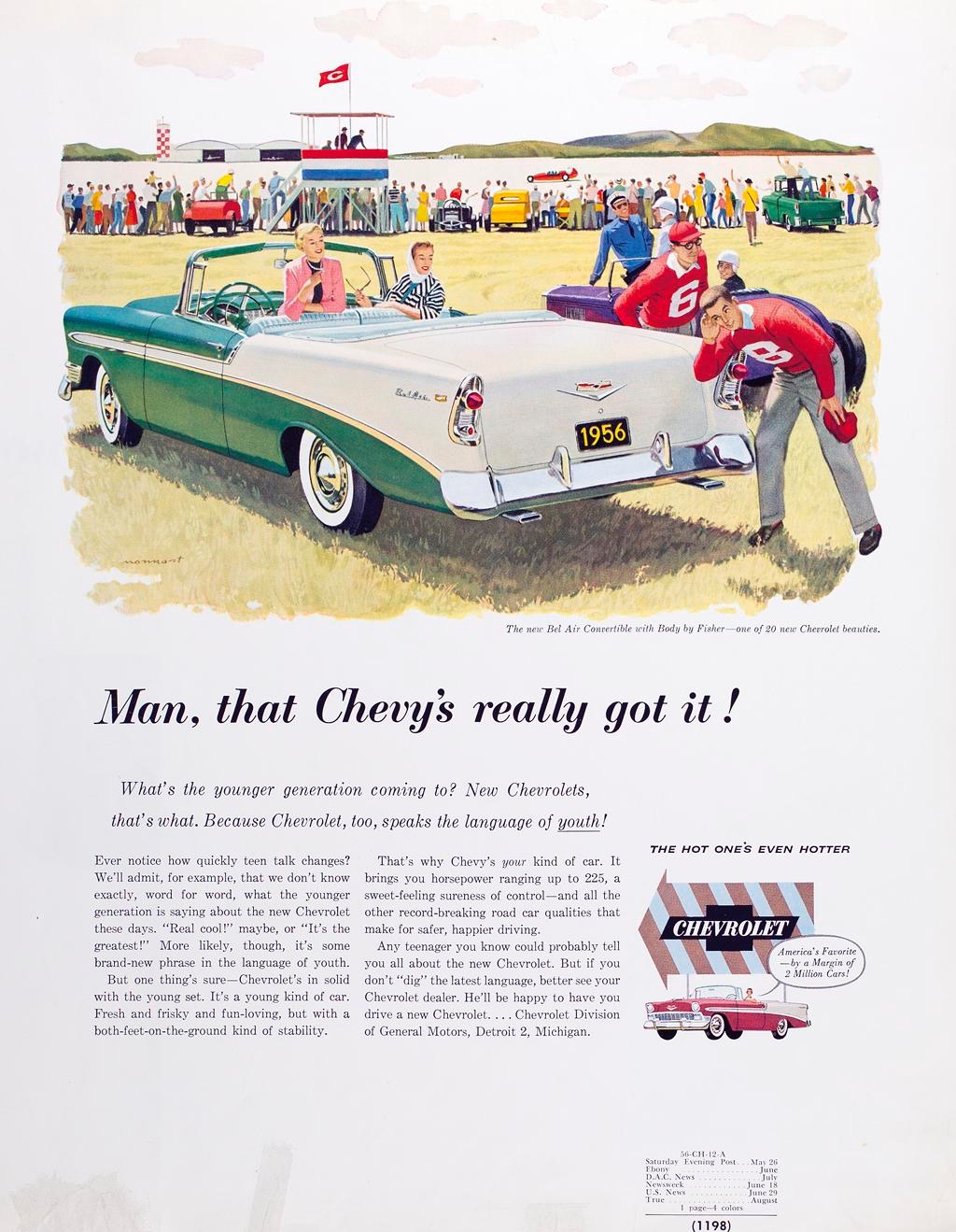