Feasting at the Pebble Beach Concours 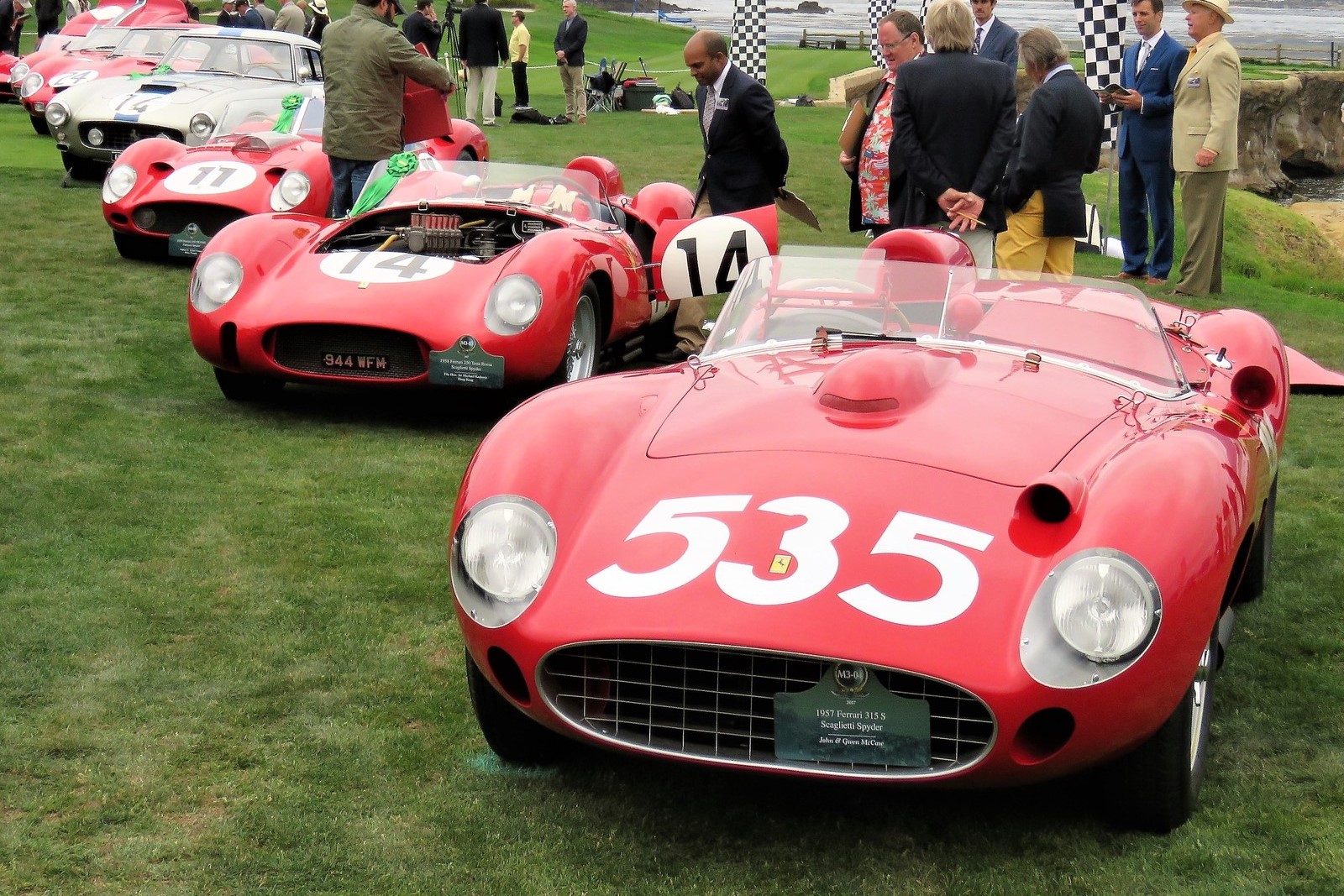 The day started gray and cloudy, as usual, a chilly coastal mist drifting in from the bay. Although I missed Dawn Patrol – the famous gathering of early birds who arrive before daybreak to watch the first of the cars roll onto the field – I did get to the Pebble Beach Concours d’Elegance early enough to witness a bunch of the cars drive in and take their places on the grass.

Chugging antiques trailing smoke, gliding classics and snarling sports cars and race cars, each was greeted with applause from the crowd of people already assembled hours before the start of the public show at 10 a.m.

The air was charged with anticipation – as well as a haze of exhaust smoke – with each participant hopeful that his or her vintage automobile could win a prize, maybe even a best of class, a special honor, or even the much-coveted Best of Show award.

I walked the 18th Fairway of the Pebble Beach Golf Links as the concours spaces filled in, taking as many pictures as I could before the swirling masses of spectators make getting a clear shot nearly impossible. Soon, the sun came out and gleaming show cars popped with color.

My anticipation was experiencing the lineup of significant Ferraris here to celebrate the 70th anniversary of the revered Italian marque, the magnificent Isotta Fraschini luxury cars, open-wheel racers from past decades, and the quirky group of custom 1960s show cars. These were among the special classes, with 27 classes in all occupied by 204 very special cars brought to Monterey from around the globe by private owners, museums and major collections.

The Ferraris were stunning, dozens of rare models lined up in several classes of incredible Italian magic. I love seeing the early cars, such as the 1951 Ferrari 212 Export Touring Barchetta, along with the sighting of an iconic 1963 250 GTO, this one a class winner at the 24 Hours of Le Mans, as well as other successful race finishes.

The antiques and classics are always impressive at Pebble, a gathering of great old cars unlike anywhere else. Especially interesting, at least to my eye, were the 1935 Duesenberg SJ, an extravagantly styled limo by Bowman and Schwartz coachbuilders; a striking Darrin-bodied 1939 Packard 1703 Super 8 convertible; and any of the fine Isotta Fraschini (pronounced eye-sota fras-keeny) classics with their Art Deco grille designs.

The American Dream Cars of the 1960s class was pretty wild, especially the sprawling 1960 DiDia 150 Bobby Darin Coupe, the famous 1963 Mantaray by Dean Jeffries, and the innovative 1967 Gyro-X prototype that balances on two wheels via an internal gyroscope. It was great to meet customizer Gene Winfield, who was showing his 1964 Reactor coupe, which was not only a show car but a TV star.

The best of show winner was something unusual, a 1929 Mercedes-Benz S Barker Tourer, sparkling in blue with bright silver hood and trim, owned by Bruce McCaw of Belleview, Washington, who seemed kind of stunned by all the hoopla.

My only disappointment during the day was the lack of a motorcycle class this year, always a favorite. The triangular grassy space where the vintage bikes are usually parked was depressingly empty.

But as a Porsche 356 guy, I was psyched to see an early Porsche make good. The 1952 Porsche 356 Reutter Cabriolet was the only Porsche in the show, unlike the gang of them at most other events and driving on the streets during Monterey Car Week.

A beautiful car, the 356 won best of class of Postwar Open, beating out some excellent ragtops from Lancia, Cisitalia, Kurtis, Mercedes-Benz and Jaguar, as well as a pair of Shelby Cobras. Very nice.

This was yet another terrific Pebble Beach Concours, now in its 67th year, the granddaddy of them all that sets the standard for the rest.