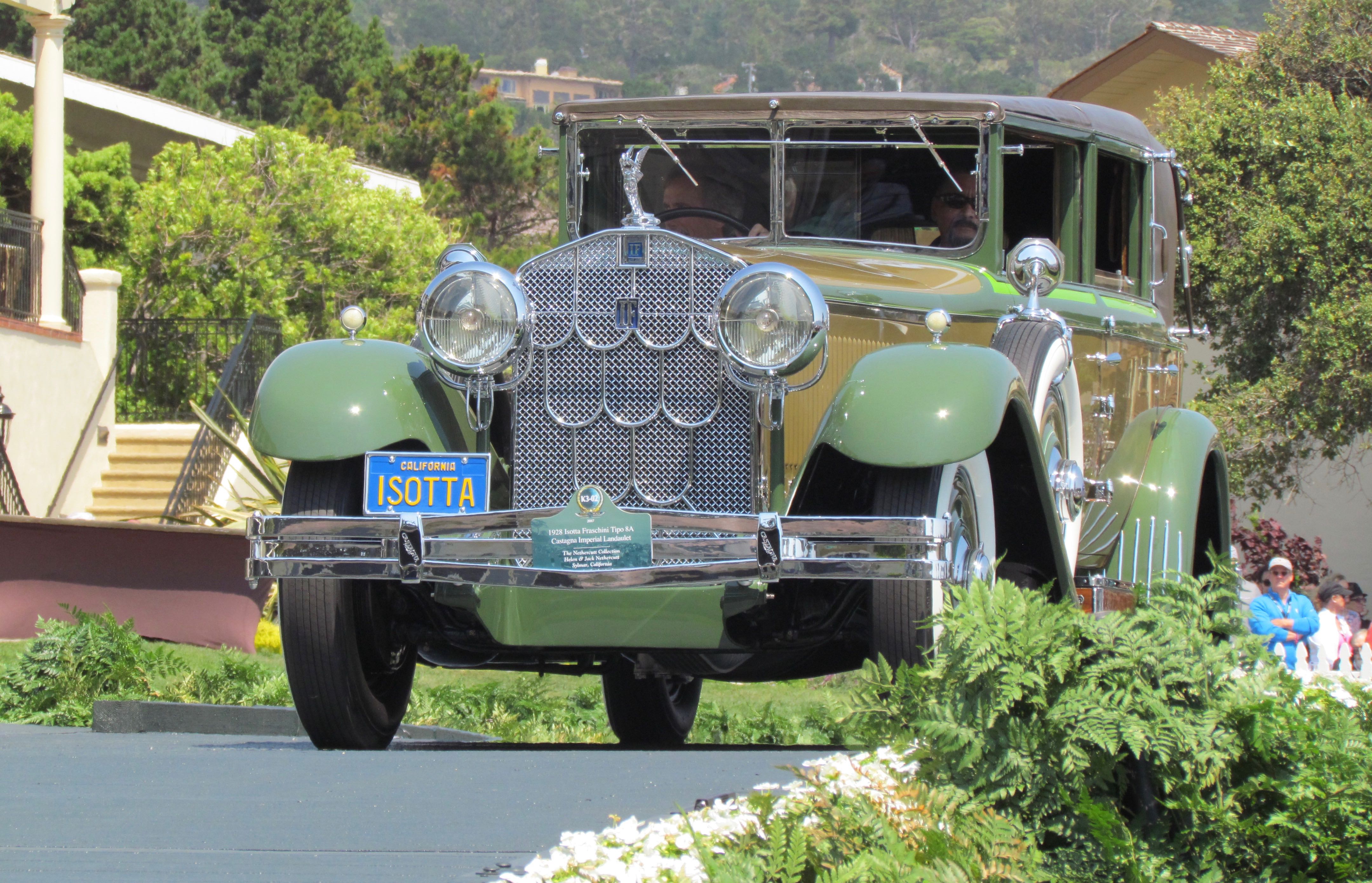 Car museums were well represented on the 18th fairway at the 67th annual Pebble Beach Concours d’Elegance last weekend, as well as at other venues during Monterey Car Week.

Five of the eight cars in the Open Wheel Race Car class were museum vehicles, and four of the 10 cars in the American Dream Cars of the 1960s class ventured out of their museum homes onto the 18th fairway.

Among the 10 cars in the American Dream Cars of the 1960s grouping were those from the Museum of Transportation (St. Louis), Studebaker National (South Bend, Indiana), Petersen (Los Angeles) and Lane (Nashville) museums.

The Indy museum also showed its 1964 Ferrari 250 LM Scaglietti Berlinetta in one of the classes honoring the Italian racing and sports car maker’s 70th anniversary, and the Mullin had a 1951 Bugatti by Gangloff among the cars in the Postwar Grand Touring display.

Mullin also had four cars in competition at the Rolex Monterey Motorsports Reunion, where the Collier Collection put its 1964 Abarth Sima 2 Mila and 1966 Porsche 906 Carrera in jeopardy.

The Petersen and ClassicCars.com combined efforts to present three lowriders to Monterey Car Week with displays at McCall’s Motorworks Revival and at The Quail, A Motorsports Gathering.

The Petersen Automotive Museum made several announcements at Pebble Beach, among them one done in conjunction with Porsche, which will support a special exhibit, “The Porsche Effect,” celebrating the automaker’s 70th anniversary.

Last fall, Porsche opened its Porsche Experience Center in Carson, California. While in the area, the automaker’s board, including Wolfgang Porsche, visited the Petersen. Klaus Zellmer, president of Porsche Cars North America, said he had a difficult time getting the board members to leave the museum to attend other scheduled functions and received strong support when he suggested the exhibition, which is scheduled to open February 3, 2018 and run for a full year.

Not only did the board like the museum, but it knows that nearly one of every four Porsches sold in the U.S. go to California residents. Were California an independent nation, it would be Porsche’s fifth largest market.

The Petersen also announced that Rob and Melani Walton would sponsor the museum’s Industry Floor and (children’s) Discovery Center and that SEMA would provide a $1 million grant so that 1 million of the 10 million photographic images from the former Petersen Publishing company could be digitized and meta tagged for sharing.

The museum also said it will join with the LA World Affairs Council to host a global “Future of the Automobile” and mobility forum in May, 2018.

Indianapolis Motor Speedway historian Donald Davidson will help the Indiana Racing Memorial Association will unveil two historical markers September 2 at 4 p.m. at the Auburn Cord Duesenberg Museum in Auburn, Indiana. The makers will honor the contributions to racing by the Auburn Automobile Company and by Duesenberg, Inc.

Auburn produced a purpose-built Indianapolis racer in 1930 but is best-known for its speed-record runs at Bonneville, Muroc Dry Lake and on the Atlantic City Speedway’s board tracks. Auburn’s corporate partner, Cord, built cars based on the front-drive system developed by Indy racer Harry Miller and won the Stevens Trophy Challenge in 1937 by averaging the fastest 24-hour average speed in a competition held at the Indy speedway.

Duesenberg, of course, claimed victories at Le Mans and Indianapolis.

The America on Wheels museum at Allentown, Pennsylvania, will open a special display September 9 through December 30 featuring “The Cars from Transformers,” including Bumblebee and Megatron.

The Simeone Foundation Automotive Museum stages The Legends of Lime Rock special event Saturday with a panel presentation by race track founder Skip Barber and a group of racers from the history of the Connecticut circuit.

The High Performance Drivers Education Program is slated at NM Motorsports Park, just across the highway from the National Corvette Museum in Bowling Green, Kentucky. Students get on-track experience based on driving experience. A less-intensive and less-expensive program is scheduled for September 1.

Sunday, the Petersen Automotive Museum hosts a Breakfast Club cruise-in featuring lowriders, with as many as 300 of the highly customized vehicles expected. The event begins at 8 a.m.

The LeMay Collections at Marymount hosts the 40th annual LeMay Show on Saturday from 9 a.m. until 5 p.m., with more than 1,000 vintage vehicles expected. Also taking place is the annual Lucky Collector Car Auctions with more than 200 vehicles crossing the block.