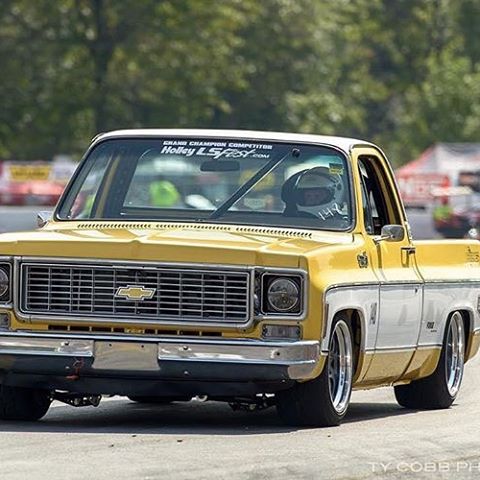 Jesse Vaughn has been building cars for 20 years. He specializes in reliable pro-touring style street and race cars. Over the years, many of his builds have been featured in Modified Magazine, Hemmings Muscle Machines, Performance and Hot Rod Business.

In 2001 Vaughn opened his own shop, Level 7 Motorsports, and by 2012 had hired a full-time staff to support the work load. Located in Marion, Illinois, the shop is open Monday to Friday, 8 a.m. to 5 p.m., and Saturday by appointment.

“We are most known for a few cars that we have built” said Vaughn. “Our yellow and white 78 C10 is the most recent. We are also known for building a pro-touring 60 Thunderbird ‘Vinnie,’ an on-the-ground ‘71 C10 ‘Mongo,’ an extended cab ‘49 Power Wagon, and a few others.”

According to Vaughn, the family owned shop pours passion into each vehicle and strives to create a lasting relationship with customers.

“Our goal is for our customers to enjoy what they have payed for and have zero issues with their vehicles,” he said.

“We typically build three to four cars at a time and try to make time for some smaller jobs here and there,” Vaughn added. “We try to offer time for intake and exhaust installs, supercharger installs, wheel and tires, and things of that nature.”

Vaughn said that build-pricing estimates can be difficult to provide because “most people’s vision of what they want changes a lot from the quoting stage to the middle of the build. We call it the Jesse Vaughn effect in our shop.”

Vaughn adds he is passionate about what he does and finds many customers “feed-off” that passion creating a snow-ball effect of ways to enhance each build at various stages of the project.

“We can always nail the parts portion of the quote,” he said, “but the labor (portion) is hard. I tell people that I can give a good ball park of hours necessary but ultimately time is dictated by the owners wants and the vehicle’s needs.”

For large ground-up builds, Vaughn says a project can be completed in approximately six to eight months.

“All of our large builds are billed by the hour and the modern muscle, performance jobs are typically charge flat rate,” he said.

“Anyone can tour the shop” Vaughn said. “We actually prefer customers to stop in whenever possible. We want to keep them motivated by seeing some exciting progress along the way. If distance makes this difficult we post images once a week to their build gallery.”