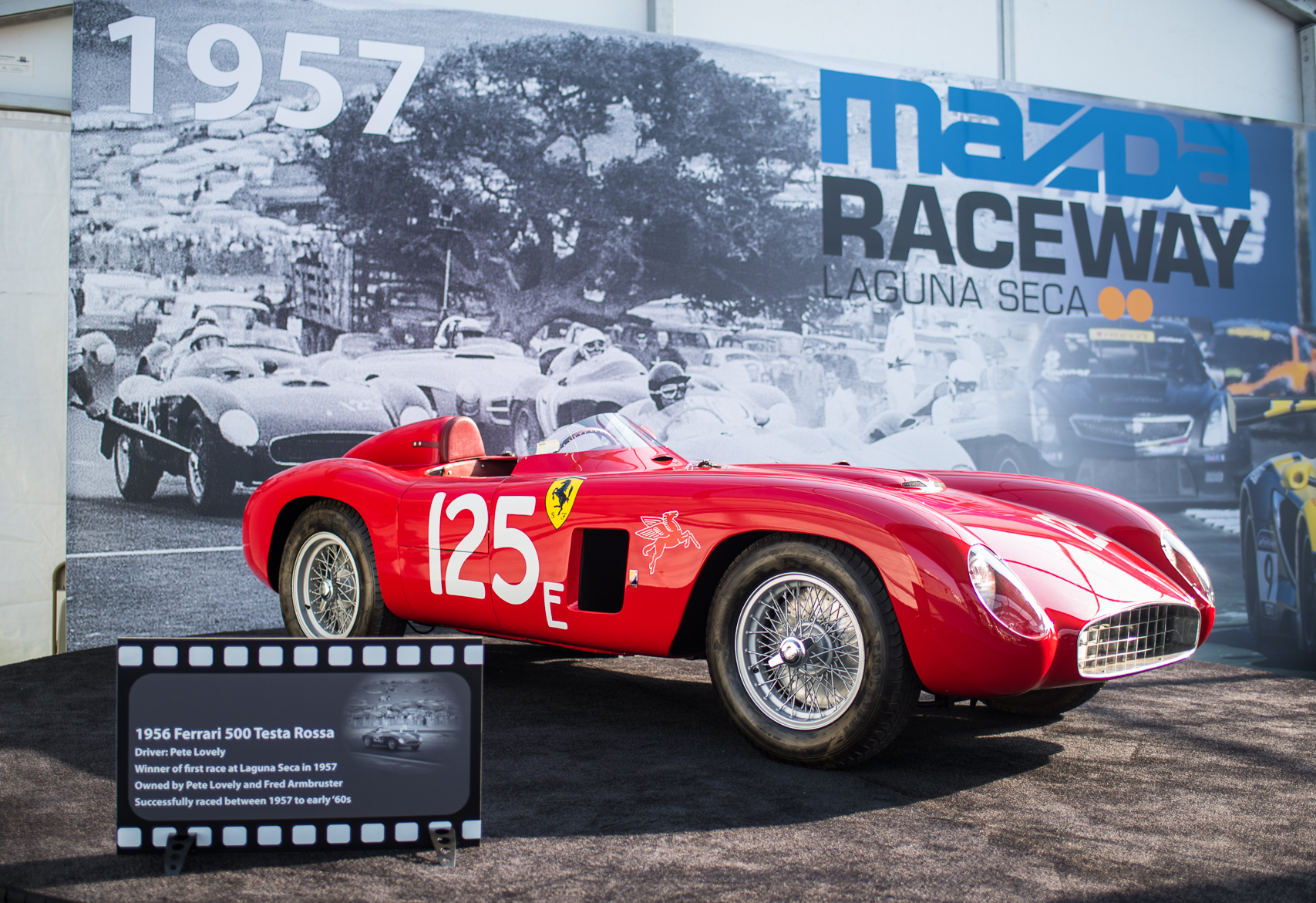 The Rolex Monterey Motorsports Reunion can be a chilling experience as iconic cars with historic significance race around Mazda Raceway Laguna Seca, a facility celebrating its 60th anniversary this year.

To honor the track’s history, a display in the infield showcases 12 vehicles that had special significance to the raceway. Among them is the 1956 Ferrari 500 Testa Rossa that Pete Lovely drove in November 1957 at the then-brand new race track on the Monterey Peninsula.

Lovely and his car raced against such stars as Carroll Shelby, Richie Ginther, Fred Knoop, Jim Hall and John von Neumann, all behind the wheel of more powerful machines from the likes of Ferrari, Mercedes-Benz, Aston Martin, Maserati and Porsche.

Before the start, it appeared Lovely and his year-old 2-liter Ferrari would not have much of a chance. But despite the odds, they prevailed.

The car is one of only 17 produced. It is powered by a 2498cc four-cylinder engine rated at 190 horsepower and belongs within a private collection. It’s also was driven by Von Neumann and Bruce Kessler, who drove it in 11 races prior to its victory in Monterey.

According to track officials, Lovely continued to drive the car in the historic races into the early 2000s.

Before he died in 2011 at the age of 85, Lovely said he would always remember winning the first race at Laguna Seca because “it attracted a who’s who of West Coast sports car racing. I was fortunate enough to be able to come across the line in front of everyone else on the last lap, and I did it in a 2-liter car. That was a real thrill.”

Track literature notes that during the race, Shelby, Jack McAfee and Ginther had all dropped out with mechanical problems, leaving von Neumann, with a 2.5-liter, 4-cylinder engine in his Ferrari and Lovely battling for the lead.

“I could get up close to von Neumann, but I couldn’t pass him because I didn’t have enough power to get by” Lovely said, adding “I devised a scheme by which I would very gradually fall back to where he couldn’t see me in his mirror. I then turned on a couple of really hot laps and I got right on his tail when we reached Turn 9. When Johnny saw me there, he got flustered, missed a shift coming out of that turn and I passed him.”

In addition to the 1957 Ferrari, among the other display cars are  a 1963 Shelby King Cobra raced by Dave MacDonald, the 1963 Monterey Pacific Grand Prix overall winner that went from 13th place to first in a 100-lap race at an average speed of 83.2 miles per hour. The Cobra is joined by a 1973 Porsche 917/30 driven by Mark Donohue, winner and champion of the 1973 Monterey Grand Prix, and a 1983 March Indy Car driven by Teo Fabl -– winner of the 1963 Monterey Grand Prix, the first indy car race at the track.