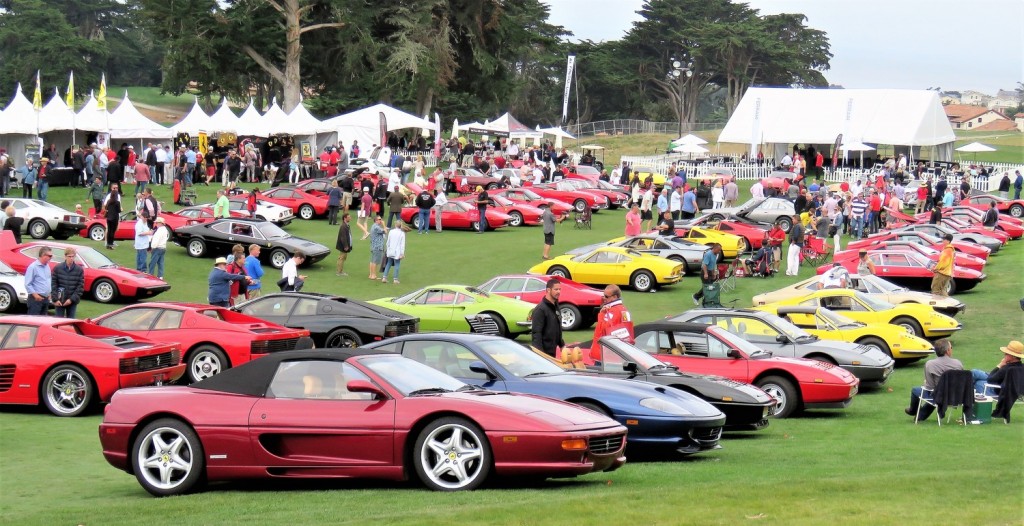 Amid all the streamlined fantasy cars at Concorso Italiano, Steve Peterson’s 1924 Lancia Lambda seemed an ancient relic, apparently the oldest vehicle by far at the celebration of everything on wheels from Italy held Saturday on the Monterey Peninsula.

The Lancia seems boxy and old-fashioned at first, but move in a little closer and the trim, handsome and low-profile styling sharpens into focus, and the technological brilliance becomes apparent.

At Concorso, Peterson spent the day explaining to a steady stream of visitors how remarkably advanced and innovative the Lancia was for its era.

“This was the first unibody car,” he told a passerby who stopped to ask questions. “That’s why it sits so low.”

To build a car without a separate frame in the 1920s took some extraordinary engineering skill and vision, he noted as he showed how the structure of the body – even the radiator and trunk – were integrated into a lightweight but strong unit.

The engine is a compact  but powerful V4, and the transmission features an early remote-shifter mechanism. The 93-year-old car drives amazingly well, he said, with good steering and strong brakes.

“It has independent front suspension and internal shock absorbers,” he added. “And it has front brakes, which most cars didn’t have at the time.”

The early Lambda was part of a diverse display of Lancias at Concorso, including handsome models from the ’50s, ’60s and ’70s such as Appia sedans, and sporty Aurelias, Fulvias, Flavias, Scorpions, even a dramatic Stratos rally car.

Peterson, a resident of Bishop, California, said he is a dedicated Lancia collector.

“I’ve had a lot of experience with Lancias,” he said. “I’ve had an Aurelia for 52 years, so it’s not an overnight thing with me.”

Held on a scenic golf course in Seaside,Concorso Italiano celebrated the 70th anniversary of the first Ferrari, the 50th anniversary of Maserati Ghibli, and Alfa Romeo’s famed GTV. Besides the vast array of cars, Concorso is something of an Italian festival with Neapolitan food and a fashion show.

As always, the collection of Alfas was impressive, as was the field of Lamborghinis, including a number of the ever-popular Countachs. The Ferrari selection seemed a bit thin on classic models, most likely because they were being prepared for display Sunday at the Pebble Beach Concours d’Elegance, which also is celebrating Ferrari’s 70th year.

Maseratis were also plentiful, including a good showing of the exotic Ghiblis.

One of the standouts among the Alfas was a glorious, black 1957 2900 CSS three-window coupe owned by Jim Bonney of Sacramento.

“I don’t think there are many in black,” Bonney said, explaining how he bought the car two years ago from a dealer in the Netherlands shortly after the dealer showed the car at the Essen Motor Show in Germany.

“It drives great and has a lot of room,” he added. “It still has the original five-speed transmission with a column shifter.”

The Alfa is a Superleggera (or “super-light” in English) version, he noted, with a body made of aluminum alloy on a tubular frame; “There are a lot of little tubes all over the place.”

The Ferrari area was filled with a herd of Italian stallions from the ’60s and through the decades to the current models, including several examples of the ultra-exotic LaFerrari. Among the Ferraris were a stunning 250 Testarossa, and a number of GTBs and Daytonas, and many other models from the best-known and most-revered of Italian brands.