Porsche Werks Reunion brings out the best from Stuttgart 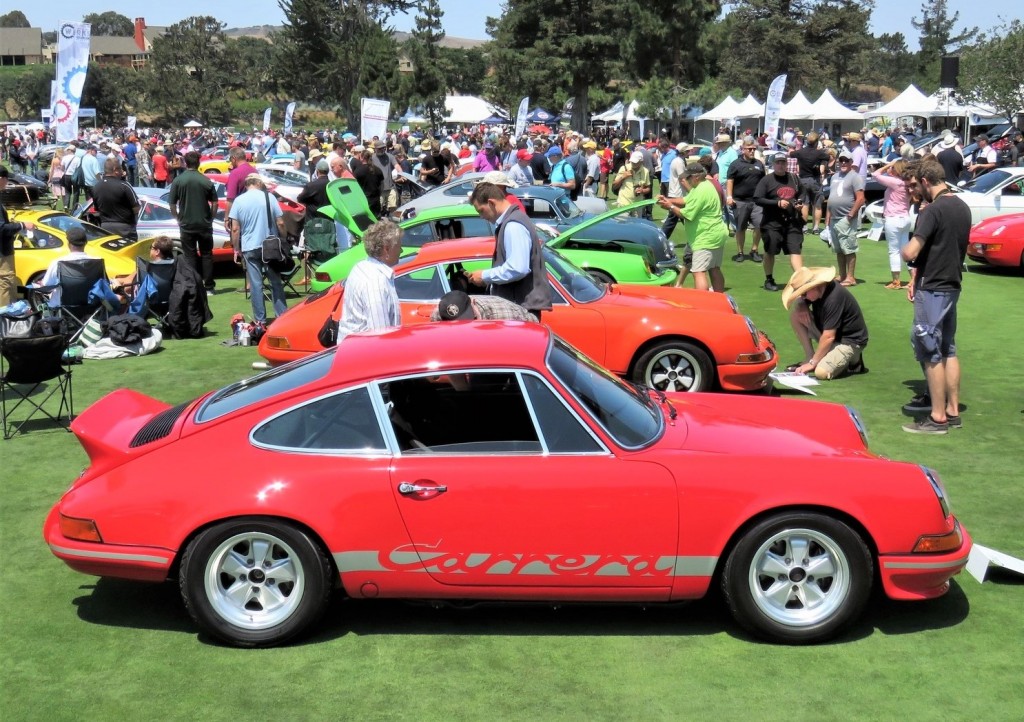 Plenty of pretty Porsches crowded into the Corral de Tierra Country Club on the Monterey Peninsula for the fourth annual Porsche Werks Reunion, but few had the originality or the credibility of Jim Kinker’s bright-red 1969 911E Targa.

The Targa looked to be in excellent condition, as did many of the restored older 911s. But Kinker’s 911 has a key difference: it is an absolutely factory-original car from its glossy-red paint to its unmarred interior and its engine parts. If any car deserves the compliment of “time warp,” this one is it.

“This car’s perfect,” Kinker, a San Jose resident, said with a note of pride. “It really is like a brand-new car.”

He should know since the 911 was purchased new in Germany by his uncle, Helmut Deiner. A German who had emigrated to the U.S., Deiner went back to the homeland to buy his dream car.

The fairways at Corral de Tierra, the new home of Werks Reunion, were filled with dream cars from Porsche, with the whole range of the famous rear-engine marvels as well as the front-engine, so-called transaxle cars – 924, 944, 928 and 968 – that have been growing in popularity among collectors.

Predominant were the iconic 911 cars, from early “long-hood” originals to a fabulous array of later-model high-performance cars for the street and track. There were quite a few of the seminal 356 models, including some splendid examples from the early 1950s and a strong contingent of the ever-favorite Speedsters. Another model growing in popularity, mid-engine 914 and 914-6 targas, were out on the grass.

As always with the Werks Reunion, the hundreds of cars parked in the Porsche Corral were as exciting to see as the cars entered in the judged concours. Just about any kind of Porsche imaginable could be found within the sea of color.

When Kinker’s uncle bought his 911 Targa, he took advantage of Porsche’s self-import program, in which he was able to take delivery of the car in Germany, and then go on a European tour before putting it on a boat bound for America. He was also a dedicated photography buff, noted Kinker, who showed several of his uncle’s scenic photos with the red Porsche in the foreground.

Deiner took immaculate care of the 911,Kinker said. This was no unused garage queen, though, but a car that was frequently driven – never in inclement weather – and has accumulated more than 84,000 miles.

“I’ve liked this car since I was five years old,” Kinker said. “Basically, the car’s come into my possession because he’s 71 now and can’t take care of the car as he used to.”

The car was displayed with its pristine factory tool kit (with the original spare fan belt, replacement bulbs and an unopened paint-touchup pen), books, receipts and paperwork, spread out on the grass.

The car’s exceptional original condition does leave Kinker with a quandary, he noted, whether to touch-up any areas of paint or trim that are showing their age, such as a small paint fleck on the edge of the targa roof.

Kinker said that besides this car, he’s really not a Porsche guy but heavy into Dodge and Plymouth muscle cars. Yet he can appreciate the different approaches to sporty motoring.

“(The Mopars) are balls-out straight-line cars,” he said. “The Porsche is fun to drive, a little bit like a go cart.”

The majority of race cars on display at the Werks Reunion were 911-based, including a famous Jagermeister car with a winning history, that showed many examples of the individual ingenuity that goes into creating a competition machine.

But there was at least one standout with another number, a 914-6 that had been radically transformed into a track star by James Patrick of Patrick Motorsports in Phoenix, Arizona. Extra wide and aggressive-looking, the bright-yellow racer serves as a showpiece for Patrick’s notable expertise, which allows him to build just about any kind of custom Porsche that can be imagined.

Patrick’s goal is always to make his customers dreams come true, he said, but sometimes he just wants to have some fun with a high-performance project.

“I love to build cars for other people,” Patrick said. “This one, I built for myself.”