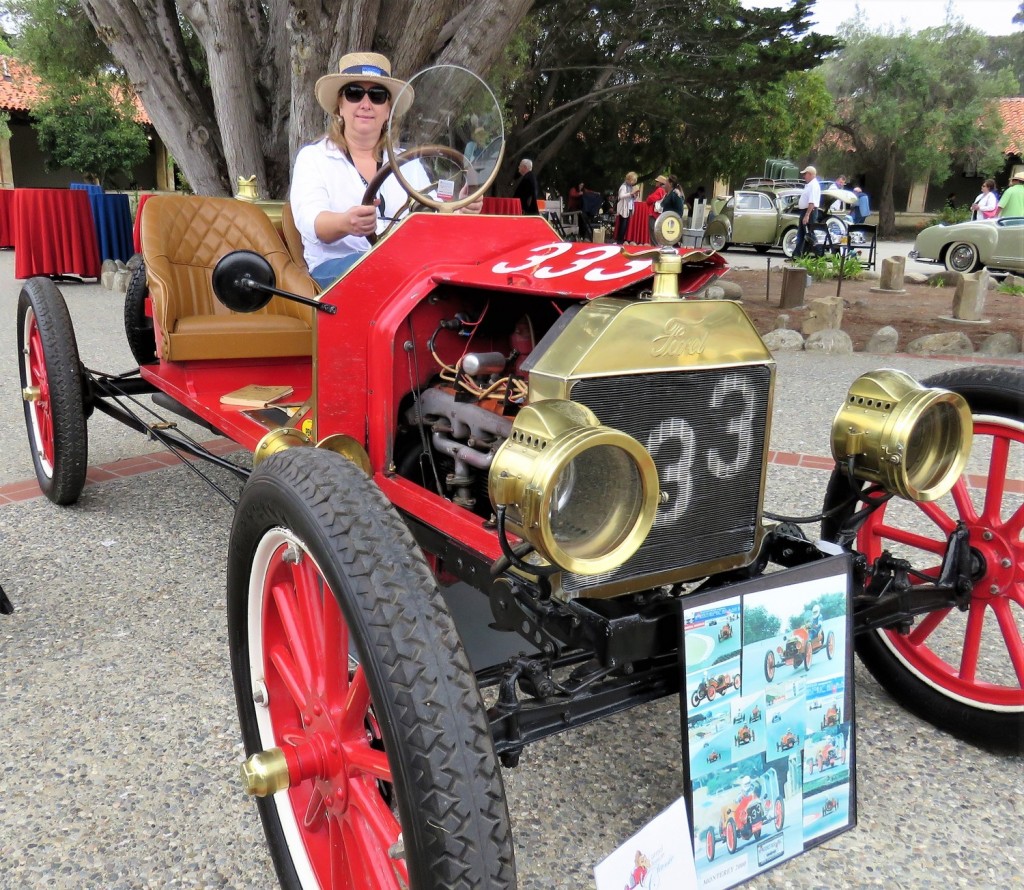 Stephanie Brower’s red-and-brass 1914 Ford Model T Speedster would be a sunny piece of car history even without its heartfelt back story. But it does have one, a moving tale that explains how she happens to possess a sporty little Model T that’s more than a century old.

This is Brower’s own antique flivver, and she drove it to show Wednesday at the Carmel Mission Classic, held at the historic San Carlos Borromeo de Carmelo Mission in Carmel, California, a laid-back respite during the hectic Monterey Car Week.

The show attracted a broad sweep of interesting vintage cars and motorcycles, each of them with their own back stories. They ranged from a stunning 1937 Duesenberg Model J by Murphy once owned by actress Delores Del Rio to a flame-orange 1970 Plymouth Superbird with its towering rear wing, from an oddly aerodynamic custom 1937 Plymouth House Car to the 1955 Woodall Wildfire hand-built fiberglass roadster.

Brower and her friend, Jeff Stapleton, sat with the Model T under the towering trees in the mission courtyard. The Speedster was built by her father 25 years ago, she said, to emulate the handmade custom raceabouts that sporting gents constructed from the ubiquitous Fords.

He did it right, making it as authentic as possible with such features as a round monocular windshield and gas-fired brass headlamps.

“My dad built this from nothing,” Brower said. “When he found it, it was being used on a farm as a manure spreader.”

Her dad, Louis Dickinson, worked as a meat cutter in Mariposa, California, and money was tight. But “this was a labor of love,” she said, and he scrimped from the household finances to afford his passion.

The stripped-down Model T saw time on the race track, she added, driven by her uncle, Stan Petersen, who was not only an accomplished racer but crewed on Steve McQueen’s race team.

The number 333 that her dad put on the car reflected his sense of humor, she added. “He said it was because the car was only half evil.”

The high point of its track career came with a simple gesture. That was when legendary Argentine racing star Juan Manuel Fangio walked past, saw the Speedster, and gave the two cousins a thumbs-up sign.

“My dad was so thrilled by that,” she said. “He always talked about it.”

Then came a point around 2008 when the financial crisis hit and Dickinson was forced to sell the Ford to pay the bills. Brower said she was saddened by the loss and vowed to get the unique car back someday. But her dad passed away before she was able to retrieve it.

“Two years ago, I found it,” she said, and was able to buy it back.

Now she drives the Speedster and shows it whenever she can.

“I think that he would have loved that I bought it and made it my own,” she said.