In 1955, Chrysler produced the most-powerful passenger car in America and celebrated its Hemi-headed, 300 horsepower V8 engine by calling the car that carried it the 300.

The Standard Catalog of American Cars subsequently praised that the “performance and styling, combined in one package of such magnitude, created an aura that was to last for more than a decade.”

In 1956, Chrysler followed with an updated version called the 300B and thus the launch of the famed “letter series,” cars with designs as stunning as they were powerful, thanks to styling b by Virgil Exner and his styling staff.

By 1962, the letter was H and one of the few remaining 1962 Chrysler 300H hardtops is our Pick of the Day. Only 558 were produced in coupe or convertible form, and fewer than 175 are believed to still exist. This one is offered by a private seller in Temecula, California.

The seller is 71 years old and losing his eyesight. “I love this car, but I must sell it,” he said in an email to ClassicCars.com.

“What drew me to the 1962 Chrysler 300H was that my godfather always drove Chrysler’s and bought a brand new one in late ’61.

“Chrysler’s 300H was put on a diet for ’62, which might go unnoticed to the ordinary driver. With 380 horsepower under the hood, 5 more than the previous years, the 300G model was put on a diet which included a shorter wheelbase and less weight, which made it feel like it had more zoom!

“Virgil Exner was a remarkable designer at Chrysler Corporation in those years. The fins were taken off and the 300H was produced on the Newport platform making it shorter, lighter and faster. The car was often marketed as a “Bankers Hot Rod” because of its elegance, power and price tag.”

The buyer notes that when he bought the car, it was in Georgia and he made the mistake of not having it inspected before his purchase. When it arrived in California, the radiator was leaking and two of the eight cylinders had less than 20 pounds of compression.

“I learned my lesson and would recommend to any serious buyer to always have a car inspected by a professional.”

After securing the car, the seller put it through a body-on restoration that included sanding down to bare metal and repainting in its original Marimba Red color. Rust was discovered in the lower quarter panels, but was repaired, he said, adding that the car has been driven less than 1,500 miles since that restoration. Photos of the restoration process are included in the advertisement.

“The original 413 cubic inch motor was bored .30 over and completely rebuilt,” he notes in the advertisement. “The horsepower is rated at 380. The transmission and torque converter were also rebuilt. The front end received new lower control arm bushings, upper control bushings, upper ball joints, lower control arm bushings, lower ball joints & strut front rod bushings. The radiator was recored and the air conditioning compressor converted to 134 freon. The brakes are drum type and were completely gone through with all new hardware. The power brake booster was also rebuilt as well as a new Master Cylinder replaced.”

The seller reports the “original leather interior, dash and headliner are in excellent condition,” and adds that the center console runs the length of the passenger compartment, which makes the 300H a four-seater. He also adds that the car has won awards at two Southern California car shows. 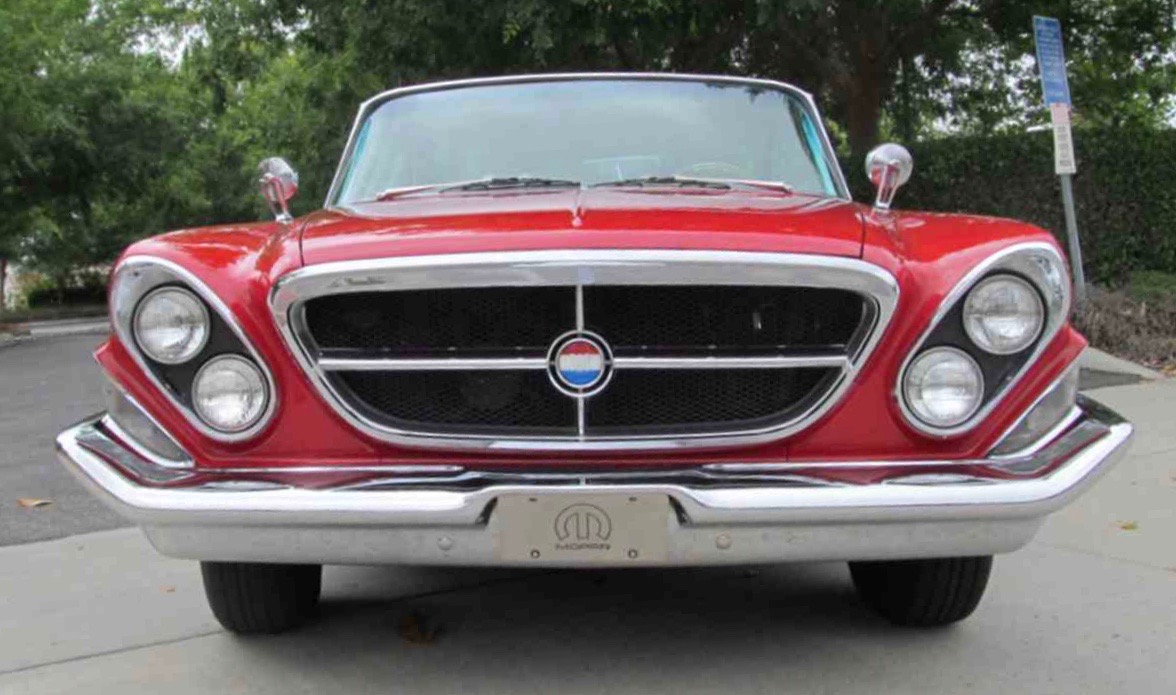