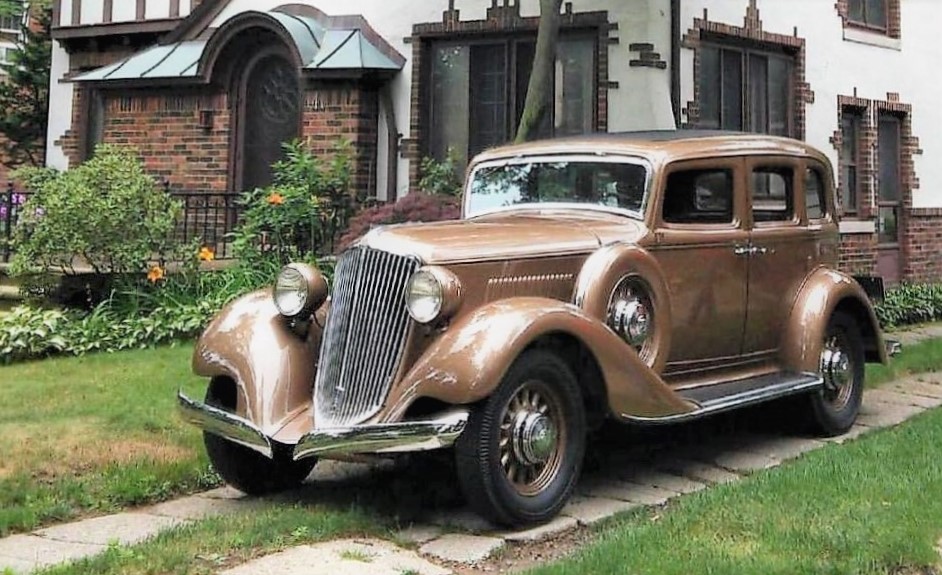 A groundbreaking automobile that abruptly changed the styling direction of American cars of the 1930s, created by a design genius known as a leading pioneer of automotive streamlining, both of them largely unsung and forgotten today.

Such was the fate of the game-changing 1932-34 Graham Eight Blue Streak and its brilliant designer, Amos Northup. The revolutionary enveloping body, unique chassis and aerodynamic shape, not to mention “Pearl Essence” paint made with fish scales, set the Graham Blue Streak apart from the boxy mainstream cars of its era, and established the trend for the coming decade.

The Historic Vehicle Association has chosen a 1933 Graham Blue Streak as the latest vehicle to be listed in the National Historic Vehicle Register for permanent inclusion in the Library of Congress. The Graham is a metallic-gold four-door sedan with sidemounts, owned and restored by Italian luxury watchmaker Nicola Bulgari, a renowned car collector and historian.

The Graham will be inducted into the register official on July 29 during the Concours of America in Plymouth, Michigan.

While the chosen sedan might not look so remarkable today, it seemed quite daring and avant garde in 1932, said Mark Gessler, president of the Historic Vehicle Association, in an interview with ClassicCars.com.

“We decided on the Graham Blue Streak because it was a break point between the past and the future of automobile design,” Gessler said. “It really changed cars forever. It went from the old era to the new era with the Blue Streak leading the way.”

It wasn’t hard for the public and other manufacturers to tell that this was the wave of the future, that car design had turned a corner.

“We went from a sort of old way of looking at cars, which were pretty much square blocks stacked on each other,” Gessler said. “Along came Amos with this design from a fresh piece of paper. It was truly a bottom-up design.”

And it didn’t take long for the other automakers to follow suit, in particular latching onto Northup’s fender design that was “valenced” to fill the space behind the wheel and conceal the chassis and suspension.

“Immediately by 1933, you could take a look and see that the cars have all changed as most of the manufacturers switched over to having a valence on the sides of the fenders,” Gessler said. “By ‘34, pretty much everybody was doing that. Then fenders became part of the body.

“There are a lot of other, sort of more-subtle features, like hiding the frame because of the way they designed the car. All of the things on the underside of the car that traditionally were more exposed, the gas tank and things like that, were hidden.

“Now the Graham becomes a singular form. It was astonishing in the period.”

Much of the chrome that embellished cars in the early ’30s was eliminated for the Blue Streak, with headlight shells that were painted instead of chromed, among other things. The paint was monochromatic, with fenders that matched the body.

And that “Pearl Essence” paint used the glittering properties of fish scales, which certainly made the Blue Streak stand out among the common herd of somber-colored automobiles.

“There were essentially fish scales ground up in the paint for a metallic type of effect,” Gessler said.

The Graham brothers designed some forward-looking engineering features into the Blue Streak as well, such as the “banjo” frame in which the solid rear axle passed through the chassis, strengthening it as well as lowering the car’s center of gravity. The leaf springs were placed outside the frame rails, another innovative feature.

Because of its new framework design, the Graham sat lower than its contemporaries, which was touted in advertisements noting that the car was wider than it was tall. The lowered stance also provided another major benefit.

“It lowered the center of gravity, which made the handling characteristics far superior to anything else on the road at the time,” Gessler noted.

The inclusion of the Graham Blue Streak by the HVA also celebrates the work of Northup, who took an academic as well as an artistic approach to design. Never a self-promoter, his achievements are not much remembered today. Sadly, he died at 48 in February 1937 when he slipped on ice and fell, fracturing his skull.

“He was one of those early stylists who knew that styling and artistic elements help sell cars,” Gessler said. “It also scientifically helped them go through the air easier.

“He was designing ocean liners, streamlined trains, and was one of the early proponents of aerodynamics and its application, and of course, that is what everything on the automobile is measured against today.”

His death was reported in the newspapers with banner headlines, he added, most of them variations of “Pioneer of Streamlining Dies.”

For more information about the Historic Vehicle Association and the cars previously added to the National Register, visit the HVA website.