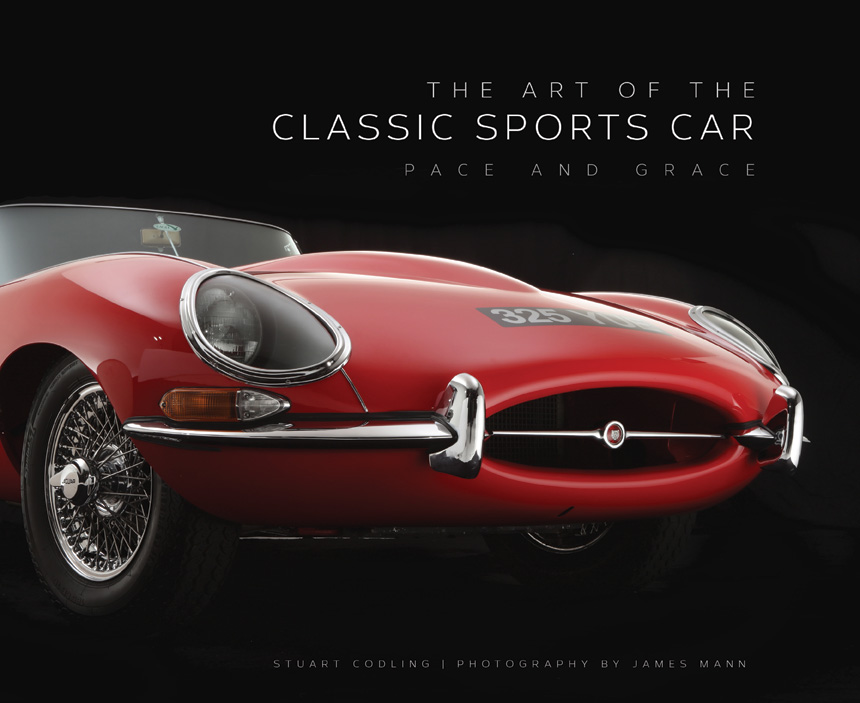 Talk with car designers about their processes and one of the things they’ll mention is the importance of the plan view, the view of a vehicle from directly overhead.

There is a perspective seen only from directly above that is vitally important to designers as they seek the proper and pleasing proportions for a vehicle. Yet we, the car-buying and car-driving consumers of those designs, rarely if ever get to enjoy such a perspective, which would require a fairly tall and perhaps tippy ladder or venturing out onto a swaying tree branch over the driveway.

Or, as I once did to photograph the cover image of a book I was writing, you can crawl through a window in the second story of a car dealership early one morning, take your photos — while being careful not to fall into the car — and then create panic among the office staff when you crawl back through the window after they’ve arrived for their work day.

Which brings us to the subject at hand, The Art of the Classic Sports Car: Pace and Grace, a newly published book with text by Stuart Codling and photography by James Mann.

Open the book and the first photograph you see (after the initial endpaper) is a plan view photograph of a Renault Alpine A110. And there are similar images to see and study throughout this book, which features 26 classic sports cars grouped into four chapters — Classic Roadsters, GTs, Sporting Coupes and Race Bred.

“In the last decades of the twentieth century, it became fashionable among volume car manufacturers to offer ‘sporting’ variants in their model ranges, usually distinguishable by a mildly retuned engine, some hurriedly designed plastic bodywork addenda, and that great aesthetic horror, the ‘go-faster stripe’,” Codling writes in the book’s Introduction.

“Classic sports cars have character because the people who built them were themselves strong characters,” — Stuart Codling

He notes that buyers of used vehicles often made similar modifications to their cars.

“If nothing else, this trend proved how difficult it is to imbue a car with character when it has been designed by committee, laboriously focus-grouped, and then stamped out by the thousands along a robot-crewed assembly line,” he continues.

The results, he concludes, are cars without soul, which is not the case with the classic sports car.

He takes us on a nice and informative ride (along the way, introducing us to the Demon Rouge, a Fiat concept I hope to someday see in person). It’s a trip very much enhanced by Mann’s photography.

So, as you travel through the pages, be sure to stop and take in the plan view images of the split-window 1963 Corvette, notice amazing front/rear balance of a Ferrari 250 California, the barely there rear end of the Datsun 240Z, the graceful curves of the Ferrari Dino 246GT, the sculpted hood of the Jaguar XKSS and the offset cockpit of the Maserati 300S.